Blockchain Losers Are Spending Millions On What Are Basically Useless Loot... 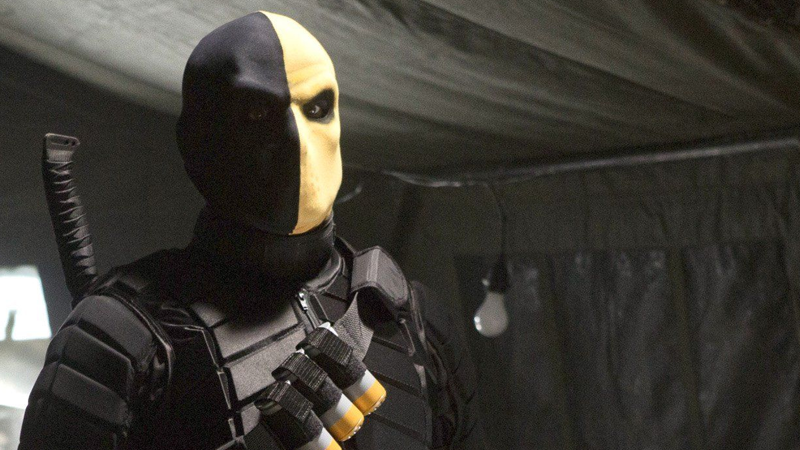 The mask that helped kickstart a cavalcade of comic book crossover nonsense. (Photo: The CW)
To sign up for our daily newsletter covering the latest news, features and reviews, head HERE. For a running feed of all our stories, follow us on Twitter HERE. Or you can bookmark the Kotaku Australia homepage to visit whenever you need a news fix.

When Arrow launched an entire universe or two of superhero TV in 2012, one of its most audacious moves — beyond like, being good; it was a dark time for superhero TV! — was to immediately set comic book fans’ heads on fire with the mother of all teases: Deathstroke’s mask nonchalantly sitting on the shore of Oliver’s island of exile. Turns out, it was a tease that wasn’t just unplanned, but also weirdly random.

In fact, Arrow’s creative team apparently had no intent of teasing either Deathstroke or his alter ego, Slade Wilson (who would eventually be played in the series by Manu Bennett) in the first season at all. The decision to throw the mask into the pilot was a spontaneous decision from DC Comics’ Geoff Johns and pilot director David Nutter:

David Nutter was on set [of the pilot], and he wanted basically a foreground element. He was like, ‘What can we stick here?’ and he had the idea of maybe something with an arrow through it. Geoff Johns happened to be on set and said, ‘Well, what if it’s like a mask, it’s half-black and half-orange, and it’s basically the Deathstroke mask?’ And we were like, ‘Oh, great Easter egg!’ because we were all about the Easter eggs back then.

It’s honestly remarkable how noncommittal it all seems — especially in the context of here and now, with Arrow about to come to a final end after eight seasons of almost non-stop comics cameos and crossovers, amid the universe of shows it’s spawned coming together for what is shaping up to be the most ridiculous crossover superhero TV could ever do, Crisis on Infinite Earths.

But what’s funniest about this now is that, essentially, Guggenheim’s story of how randomly “eh” teasing Deathstroke’s appearance came about actually made it into the text of the show. Back in the show’s fifth season, Arrow’s flashback sub-plot finally gave us the backstory of how Oliver Queen made it back to the island of Lian Yu.

Those flashbacks, of course, had already spent five seasons showing Ollie getting stuck on Lian Yu, getting off of Lian Yu, bumping into John Constantine, hanging out with some Russians, and ditching a truly, spectacularly good-bad wig, so, you know — he had to get back so he could be where he needed to be to line up with how Arrow actually began in the first place.

Anyway, as part of that process — and after five whole years of fans speculating just how that Deathstroke mask got to Lian Yu in the first place, because surely it must have meant something — Arrow’s answer to that question, considering it had already shown Slade had long been off of Lian Yu at this point in its confusing continuity, was basically “lol dunno”:

It’s still hilariously blah to watch unfold. Just random chance, an ominous sign, that it happened to wash up on the shore? All that speculation for nothing? This is a series that, moments afterwards, managed to explain Ollie’s incredible castaway flashback hair wig within the actual text of the show (he was given it as cover!). And yet the Deathstroke tease was just meant to be happenstance? Talk about an anti-climax.

But at least we know now, thanks to Guggenheim, it was just as anti-climactic behind the scenes, too.