Look at her. She is the captain now.

The dawn of the X-Men’s new age has mostly considered its impact on an esoteric, existential level. Krakoa is now a mutant sovereign nation, its citizens united in an almost religious fervour to usher in”under the auspices of a reborn Moira McTaggert”an age of mutant prowess, to better equip this long-persecuted group for a future that aims to blink them out of existence.

Like I said, heavy, big-picture stuff. But the Dawn of X is upon us, and that means new X-Men comics that can really begin examining what this new status quo means for the world and the mutants whose very lives and futures have been upended by it.

It also means there’s room for some downright fun shenanigans”and this week’s launch of Marauders, by Gerry Duggan, Matteo Lolli, Federico Blee, Cory Petit, and Tom Muller, delivers both of these in spades.

Or maybe I should say by the boatload?

Marauders #1 opens with an immediately fascinating set up: in Central Park, Kitty Pryde stands in front of what is now one of many organic portals across Earth open exclusively to mutants so they can access Krakoa, their people’s new home. Eager to see the new society that awaits her, Kitty takes her first steps towards a new life… and smashes face-first into a shocking truth. 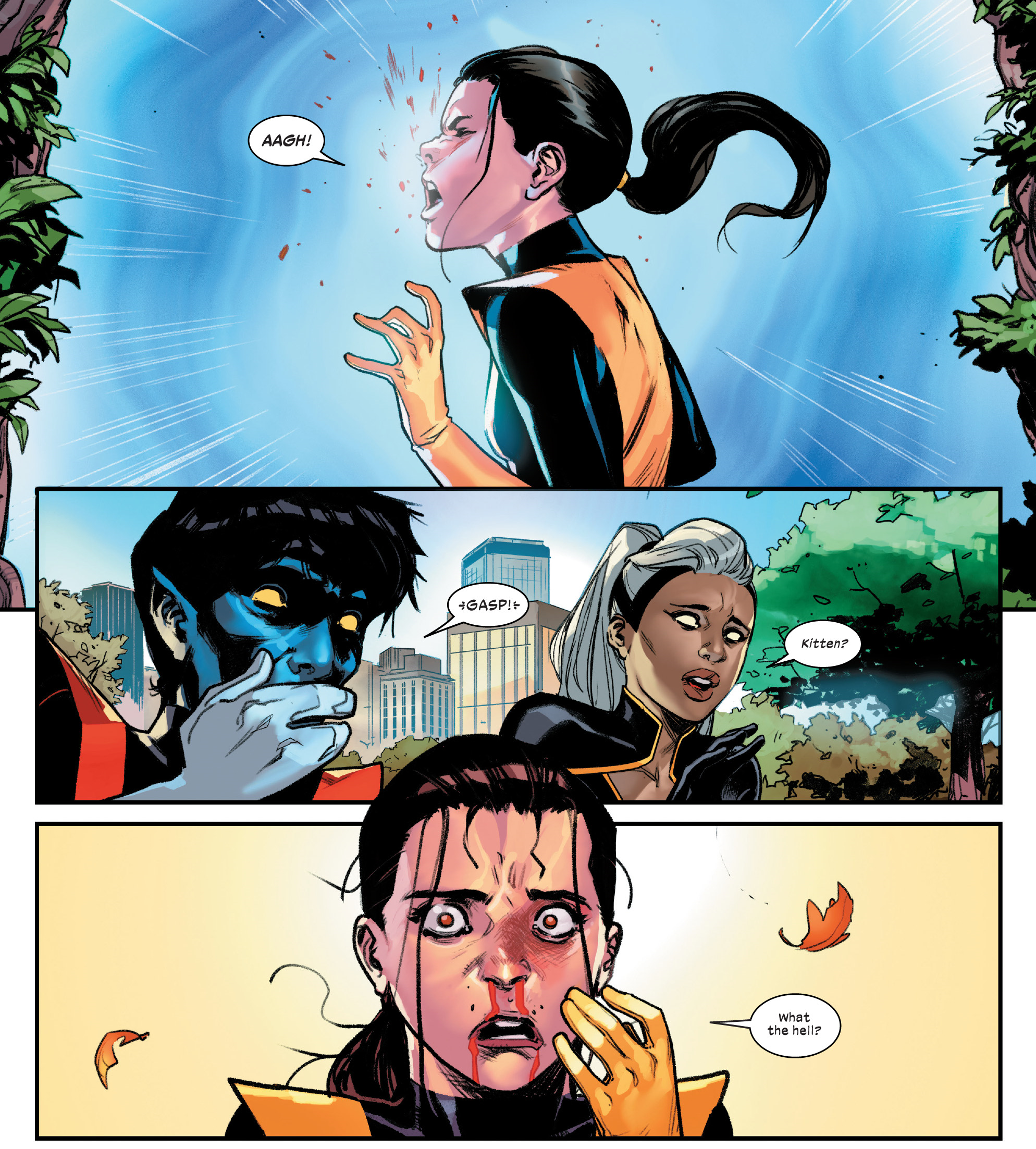 Literally. A woman who has spent her entire life slipping through the tangible now finds herself halted by a gateway that should be accessible to all of mutantkind.

It’s a scenario that is not only comical to pull with Kitty of all mutants, but one that imminently sends your head spinning with a zillion questions. Shouldn’t Krakoan gates accept all mutants? Why not Kitty? What does it mean for her mutanthood? What is Krakoan society’s response to those they’ve loved as one of their own for years being rejected by their new home? Are there more like her? How can Krakoa stand for all mutantkind if it seals itself off from some people? Why did no one attempt to let Kitty pass through with them, an apparent process the gates can use to allow non-mutants to travel with an accepted mutant to Krakoa’s shores?

Just as immediately, however, Marauders #1 mostly leaves that questioning to your imagination, for now. Kitty’s mystery serves as a bounding-off point for a much more fun premise, because, being Kitty Pryde, she doesn’t take Krakoa’s hard no for an answer. She steals a boat, points herself (and Lockheed) in the direction of Krakoa, and gets sailing. 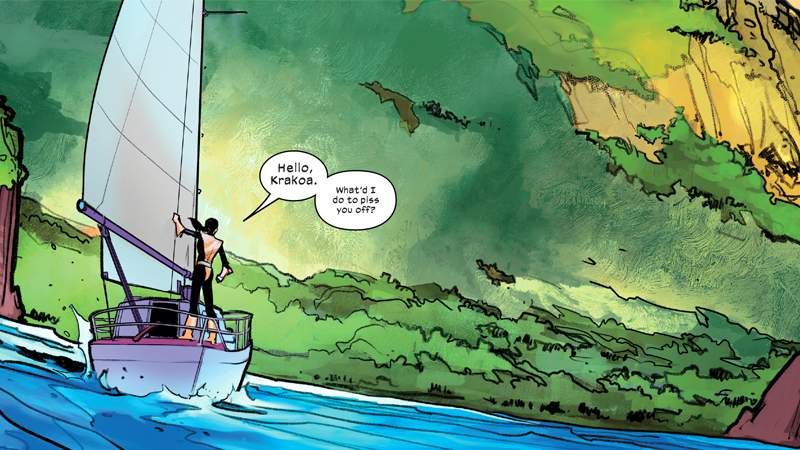 Despite Krakoa denying her the simple doorway of a gate, the island doesn’t reject Kitty when she finally makes landfall weeks later. But the journey (and supply run) she makes gives her time to really question if Krakoa is the best place for her to be at this point in her life.

She has been an X-Men stalwart, she has lead them. She has grown from student to teacher, guiding generations of young mutants as head of the Xavier Institute. She has fallen in and out of love, seen old friends reborn and others even closer to her re-examine themselves. Krakoa may not flat out be rejecting her, but it gives Kitty the opportunity to ask herself who she really is in this brave new world and wonder if there are other mutants out there like her, unable to reach paradise.

Which makes it perfect that along comes Emma Frost to offer Kitty”or Kate, as she diligently calls her, a reminder that Kitty is still so unsure of her place in this new mutant world that she can’t even get her closest friends and allies to stop calling her by her teenage nickname”an entirely new path to venture down. An ominously named one, to boot: becoming Emma’s Red Queen, a title that has some long, rather sinister connotations in the X-Men’s past (when Madelyne Pryor took on the mantle), but here represents a new hope for mutants all over the world.

In a new world where Krakoa is offering the human nations that accepted its sovereignty”and, most crucially, denying some”incredible scientific advancements through Krakoan-made drugs that extend human lifespans, cure terminal diseases, and even rebuild minds damaged by mental trauma, a new black market for the trade Krakoa needs to sustain itself as an independent country has cropped up. Which, in turn, necessitates new mutant supply lines that need to be defended. Emma’s new Hellfire Trading Company”not the first time uncomfortable colonialist imagery has attempted to be reclaimed by these new X-Books!”needs someone to not just safeguard their goods, but travel the world offering assistance to mutants that, like Kitty, cannot make their way to Krakoa’s shores. 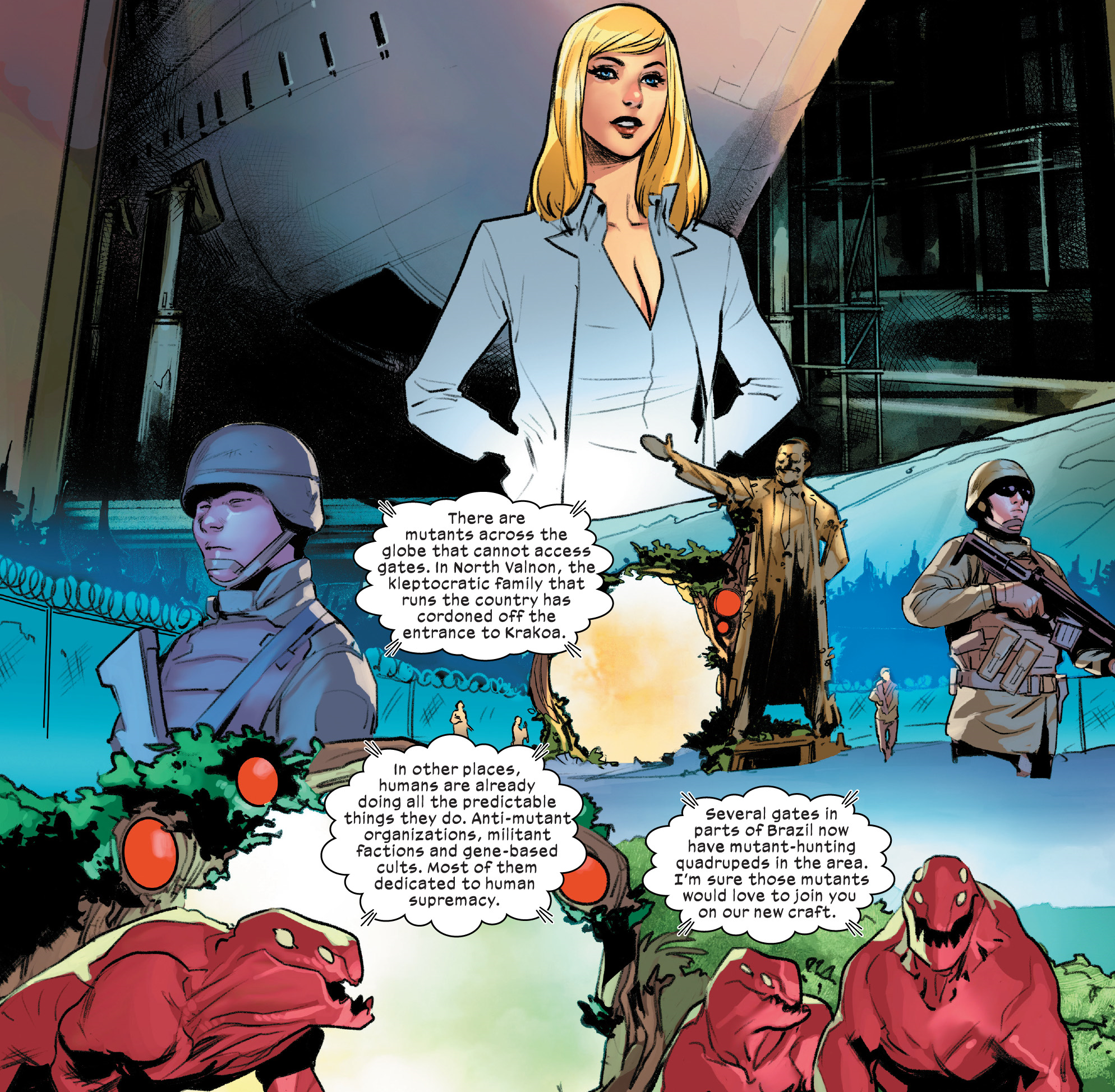 Not because they, like her, find themselves faceplanting right into a portal. But because, despite the majority of the world accepting Krakoa’s sovereign existence, humanity has not exactly rolled over and started allowing the mutant populace to flock straight to an unassailable paradise. Some nations have stationed military guards around Krakoan gateways, denying access. Some have been more subtle, conveniently dropping mutant-hunting animals and other creatures around gateways as a more indirect deterrent. Emma doesn’t just offer Kitty a job, but a purpose: reach out to those she shares a plight with and be their guide home.

It’s a mission that, while hesitant to work at Emma’s behest initially (especially upon learning that she wasn’t even Emma’s first pick), Kitty ultimately finds herself relishing. She gets to be independent”after picking a small crew in the form of Storm, Iceman, and the original Pyro (who, err, happened to be napping on the fancy new boat Emma gifts Kitty), that is. She gets to travel the world instead of being cooped up in a seeming paradise.

And above all, she gets to take the fight directly to the kinds of arseholes Kitty Pryde hates: bullies persecuting her fellow mutants. In the process, like Emma’s re-purposing of the Red Queen before her, Kitty takes on a name for this new team that borrows from a dark time in the X-Men’s past in the hopes of reclaiming it as a message of hope: the Marauders, once Mister Sinister’s covert ops group of anti-mutant assassins, are now seafaring liberators. Oh, and the fact that she essentially gets to be a pirate”she even purloins a very convenient cutlass from a Russian soldier on her first mission to complete the look!”is an added bonus. An added, extremely fun bonus.

This kind of storytelling”a smidgen of mystery to hook you into the wider X-world, a sense of adventure, a tale that looks at the smaller-scale impact of the big ideas introduced elsewhere and some damn snappy, comical writing to boot”is the perfect counterbalance to the heady material Jonathan Hickman and his team are tackling elsewhere in this post-HoXPoX world. Kitty’s new mission isn’t just a great way to examine the ongoing worldly reaction to mutantdom’s rapid ascendance on the global stage, it’s just downright fun to boot. It’s bold, silly, hopeful, and brave, just like you’d want any X-Men series to be. 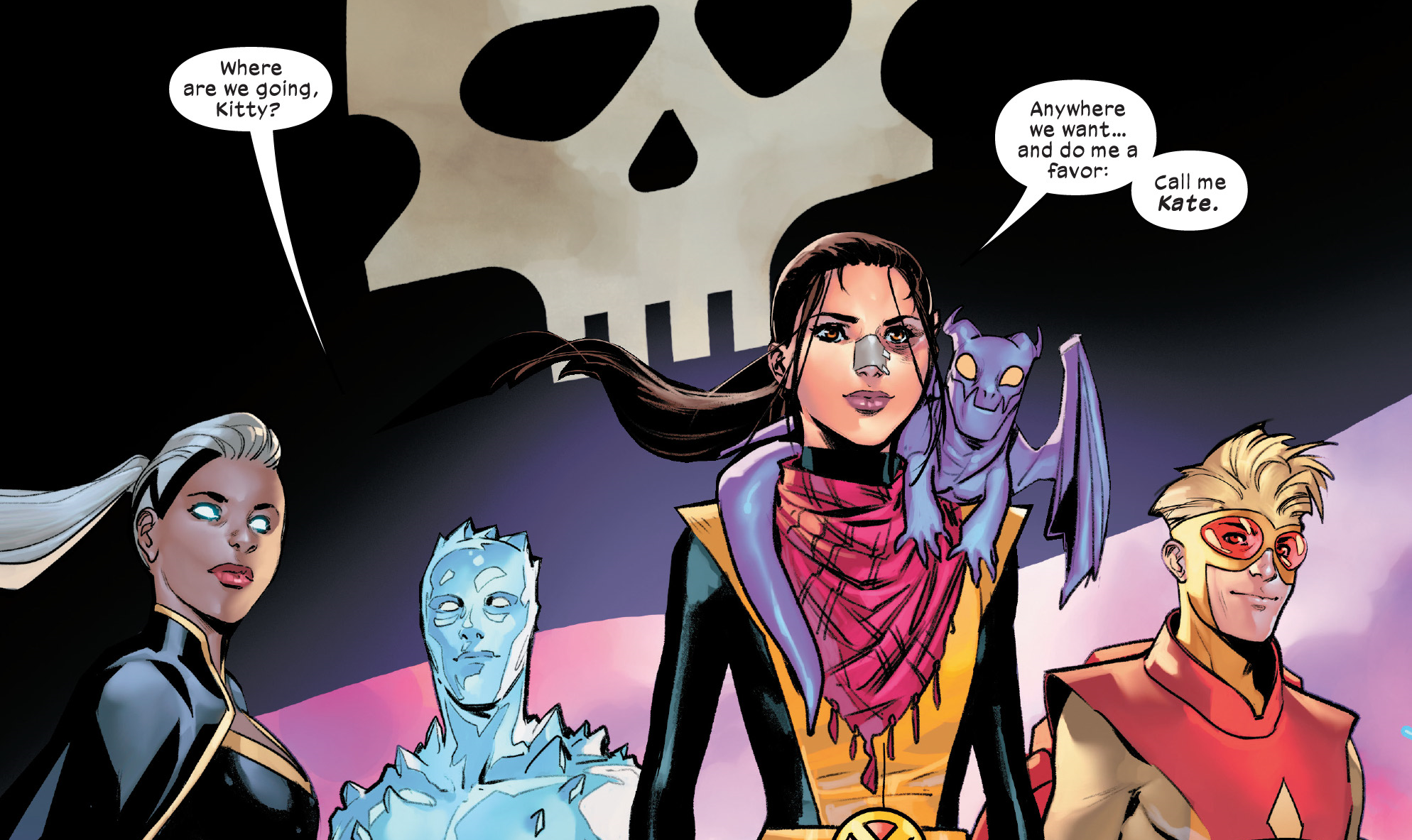 Raise an anchor and tip a mizzenmast to our new Pirate Queen, Kitty Pryde. Just make sure you call her Kate.