In This Week’s X-Men Comics, The Kids Are Alright, But Krakoa Isn’t

So far, the comics in Marvel’s “Dawn of X” have begun to examine the wider ramifications of mutantkind’s new sovereignty through a lens of hope. Our heroes are out there, proud and defiant, relishing in this new age of prosperity. But this week, they learned that all the new dawns in the world can’t save them from the darkness.

This week’s launches of New Mutants“by the X-Men’s latest arbiter, Jonathan Hickman, as well as Ed Brisson, Rod Reis, and Travis Lanham, with design work by Tom Muller”and X-Force“by Benjamin Percy, Joshua Cassara, Dean White, and Joe Caramagna, and once again featuring design work by Muller”tackle this darkness in different ways, but the theme of naiveté running throughout is there in both.

For all the hope that sits at the heart of what Charles Xavier, Magneto, and Moira MacTaggert are working towards (in spite of what they feel like is a doomed future regardless), and for all the sudden shifts in mutantkind’s status quo for the better, a sense of complacency has lead to them forgetting that beyond Krakoa’s shores their people still have many enemies.

The naiveté found in New Mutants is perhaps a more wholesome kind. After all, this is, and always has been, a team of teens trying to find their way in a world of mayhem and horrors. Reborn here (literally in some cases, like Rahne, who’s re-emergence from Krakoa’s resurrection pods opens the issue) and together again, the classic team”in the form of Magik, Wolfsbane, Sunspot, Mirage, Cypher, Mondo, Karma, and Chamber”are more than happy to relish a post-human mutant society, right down to the coffee.

There’s a sweetness and a lightness to their conversations that stands heavy in contrast to how we’ve seen Krakoa discussed by the adult mutants around them in other series so far”even though they too are full of hope at Krakoa’s potential.

There’s a poetry to the way that, say, Xavier and Magneto discuss the island that’s in stark contrast with the more casual acceptance Dani and Roberto share as they trudge across the island to their newfound homes. There’s almost a distance the teens share that the adults don’t”an appreciation of mutantkind’s struggles in the past that led to this moment from a historical context, but they’re not necessarily pinned down by the weight of those struggles. This is just the new normal they can go with the flow with.

That teenage naiveté also means that the New Mutants are not as immediately tied down to Krakoa’s paradise as their adult counterparts, either. They’re already poking and prodding at what the island is really like”as Cypher recruits Mondo to use his soil-communicating powers to try and reach a better communion with Krakoa’s sentience, to very creepy results”but at the same time…well, they’re teens.

They don’t wanna stick around, even if it is paradise. They want to be out having fun away from all those boring adults. 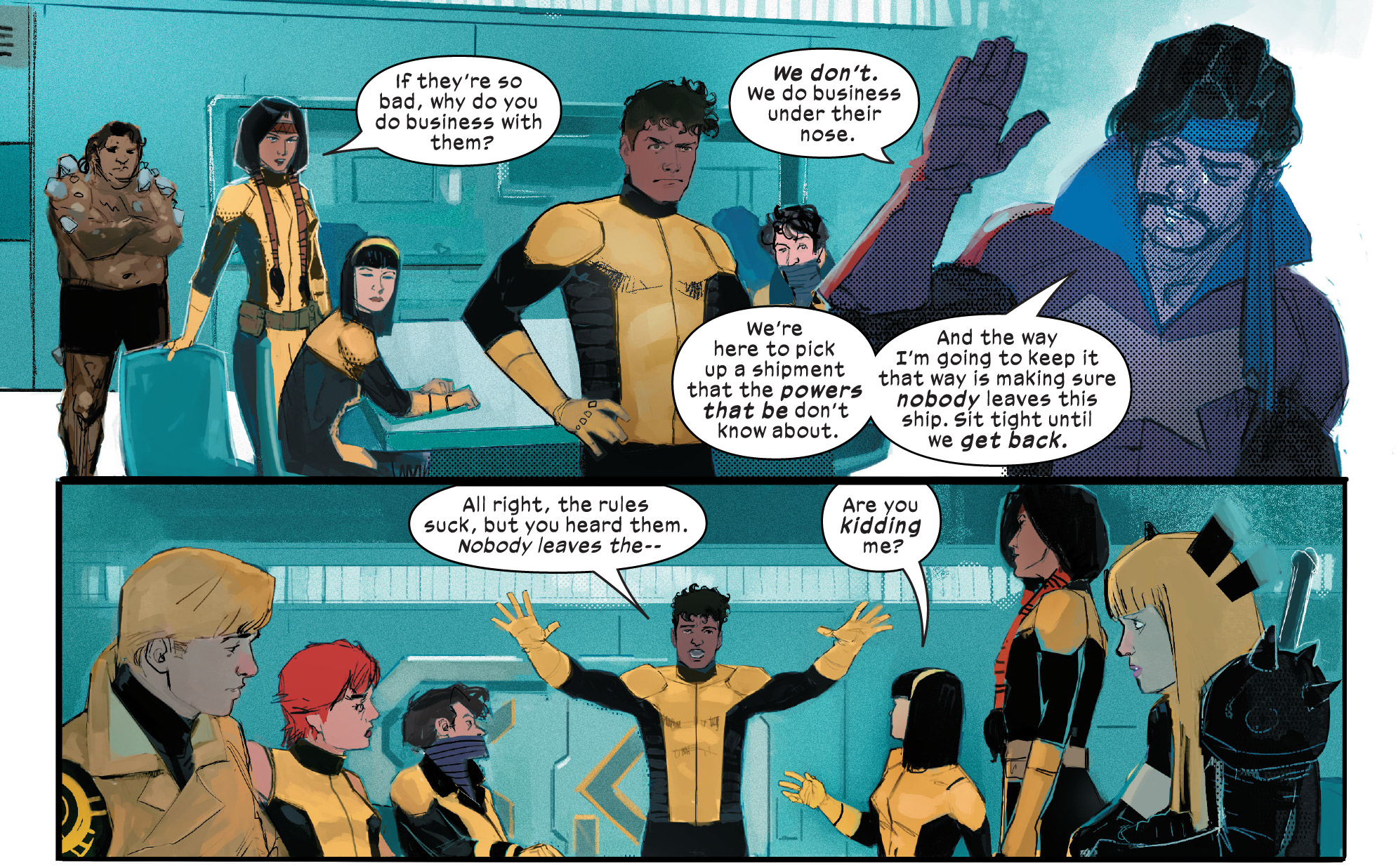 That”as well as a desire to bring Sam Guthrie, a.k.a. Cannonball, from outer space to visit Krakoa”is what leads to the team hitching a ride with the Starjammers into Shi’ar space. And it’s there, around far more cynical adults like Corsair and his fellow rogues, that the New Mutants find that the confidence they and their fellow mutants now share in this hopeful age isn’t entirely in supply beyond Krakoa’s borders.

Almost immediately the Starjammers bristle at the team’s presence on their ship, met with a likewise dismissal from the New Mutants that reads both as teenage defiance and a distant, alien misunderstanding of just how people could dare say no to mutants in this brave new Dawn.

When Corsair tells the team to stay on his ship while the Starjammers go do some very dangerous smuggling on a Shi’ar station”Corsair weaving a tale of religious persecution and tyrannical zealots in an attempt to scare the New Mutants into obeying his instructions”naturally, the teens decide that as heroes, it’s their duty to go out and help save the day. All it does is get them caught in the middle of the Starjammers’ thievery, and a firefight where the Starjammers simply ditch their young wards and use their inevitable capture by the Shi’ar to make their escape. 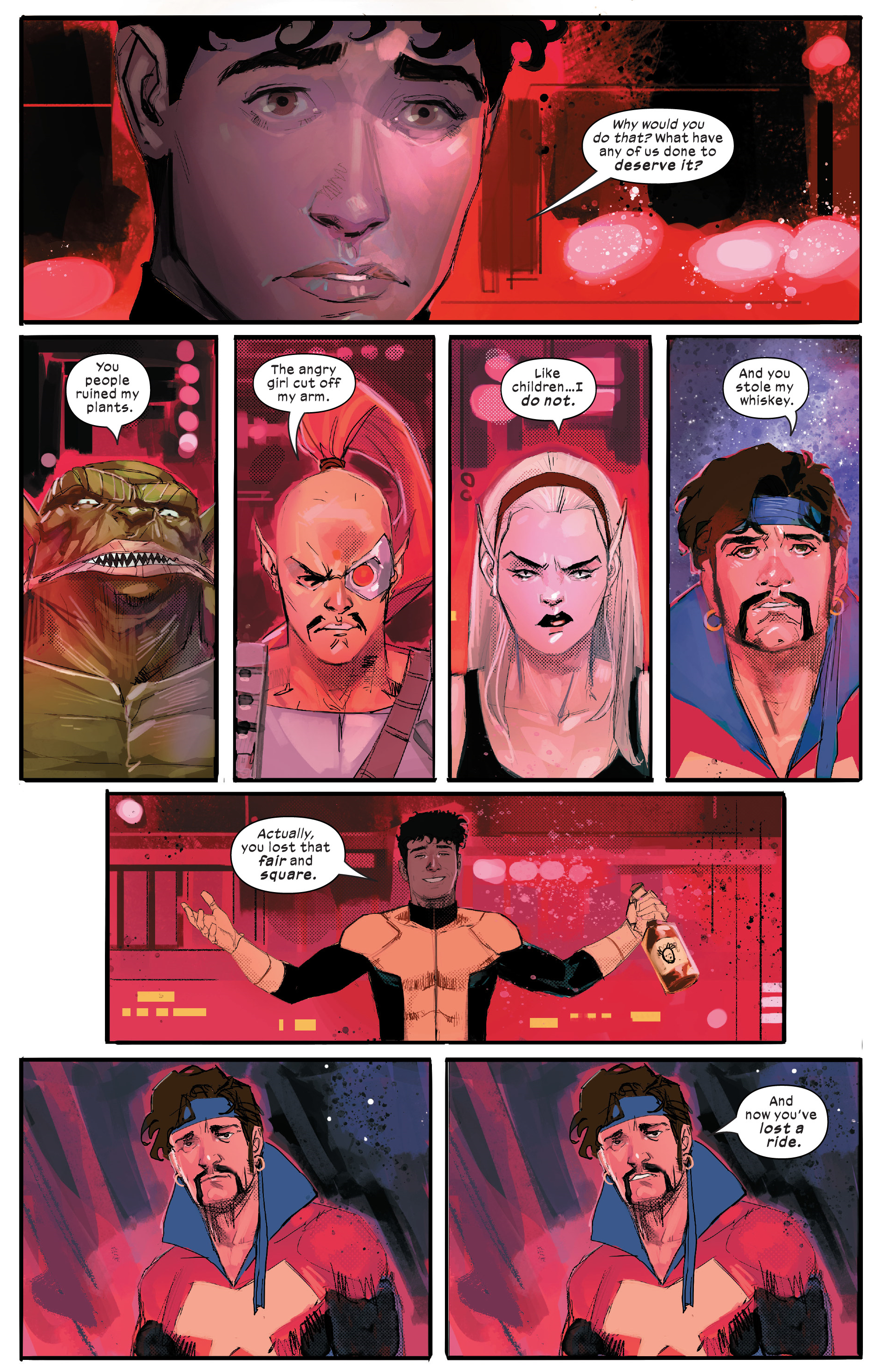 It’s a comeuppance, in some ways, on a micro-scale, of the sheer sense of hubris that mutantkind at large has wielded like a cudgel in this post-HoX/PoX era. The New Mutants are cocky and self-assured, pushing and poking at any boundary they can, to the annoyance of everyone around them”and in the end, it gets them dumped on the edge of Imperial space and arrested in a place where Krakoa’s name and newfound sovereignty will mean very little.

But it’s not just among the stars at the fringes of the Shi’ar Empire that mutant hubris is given a sharp reminder that not all is well in the Dawn of X. In the pages of X-Force, the cost is much more shocking and brutal than being stiffed. It is, as befitting a series titled X-Force, a cost that’s paid in far bloodier currencies. While the issue is primarily set-up for what will become the eventual establishment of the titular team, that set-up is predicated on a sense of dread that runs throughout its pages. 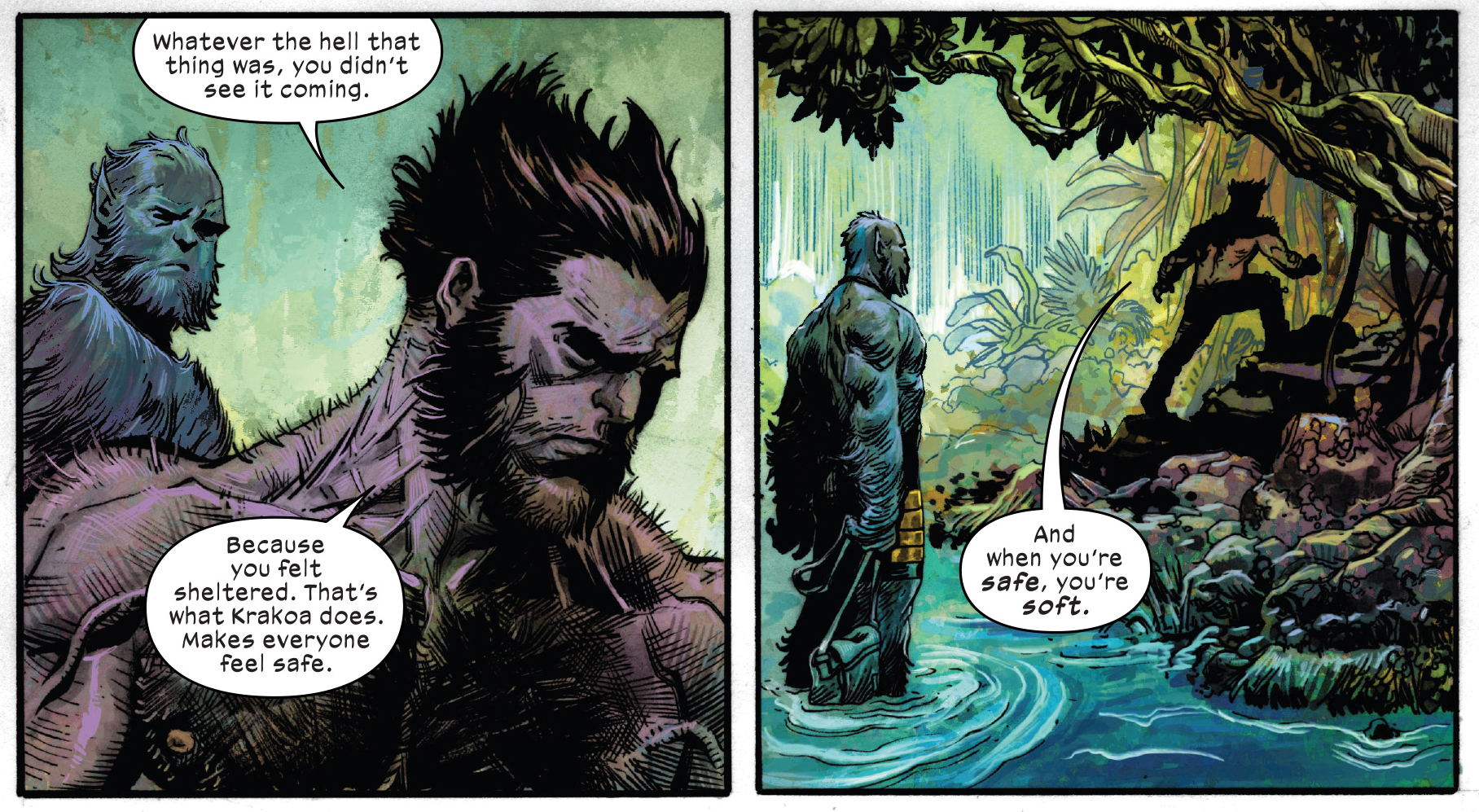 From Beast being stalked by predators on an island that shouldn’t have predators nipping at its inhabitants’ heels, to Black Tom finding his connection to Krakoa’s natural defence systems on the fritz, there’s an air of unease with every page turn of X-Force #1. It’s a dread only released by a moment that readers have likely thought would happen since the pages of House of X #1 itself: A team of anti-mutant human mercenaries infiltrates Krakoa and starts gunning down mutant after mutant.

It’s a nightmare scenario, mutants young and old shot to pieces as they dance and celebrate in paradise”in their paradise. Their attackers lash out not just with weaponry, but with a reminder: how could mutants even dare to presume that those who hate them would stop their hatred, just because nations beyond them decreed that it was fair and just for mutantkind to have its own nation?

It’s a lesson learned in words and blood, as the mercenaries find their true target, and to the horror of Beast, Wolverine, and Marvel Girl, Xavier is gunned down and killed.

Krakoa’s innocence, mutantkind’s newborn innocence, lie asÂ shattered as the fragments of the bullet-riddled Cerebro. Even if death has stopped being a true obstacle to mutantkind in this age, there is still a shock to the deaths here, even Xavier’s”beyond it making a dramatic image to end an issue on.

It’s a bold reminder that the X-Men may have stopped fighting their own kind, but there are still so many wars and hatreds out there to deal with. It’s also surprising that this hubris is being punctured so soon in the Dawn of X, even if it feels like an inevitable reckoning for their alien arrogance. Gonna take a bit more than time in a pod to iron that one out, Charles. (Image: Joshua Cassara and Dean White, Marvel Comics)

Yet this is a tragedy born of the same childlike naivetéÂ that was on display in New Mutants. As Jean Grey says to herself while racing towards Xavier’s fateful last stand, the sheer overwhelming joy of Krakoa’s revival has made the X-Men slow and careless.

The cost of that hubris might be on an entirely different level in contrast to the space-bound antics of the New Mutants, but as far away as they are from Krakoa right now, it’s the same lesson to be learned nonetheless.