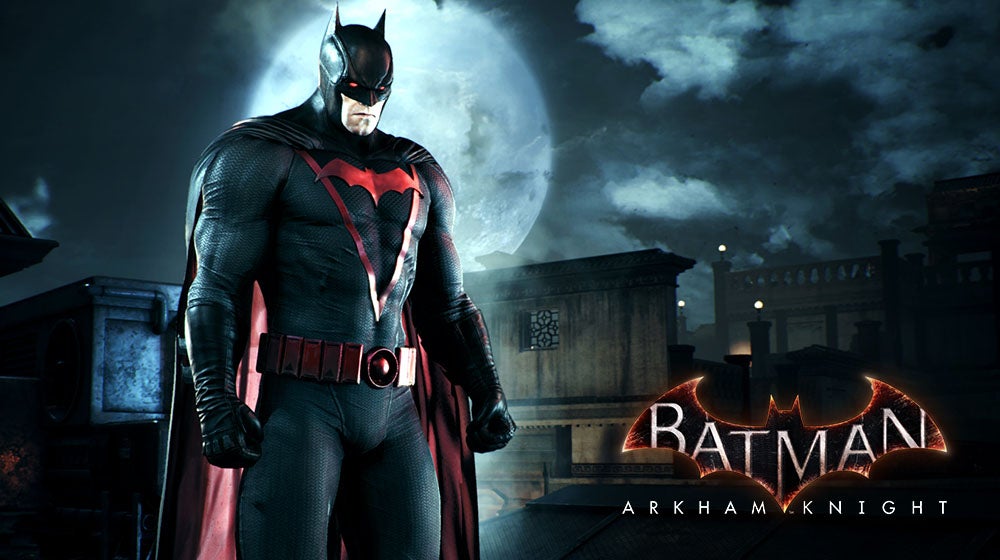 Image: Rocksteady
To sign up for our daily newsletter covering the latest news, features and reviews, head HERE. For a running feed of all our stories, follow us on Twitter HERE. Or you can bookmark the Kotaku Australia homepage to visit whenever you need a news fix.

Rocksteady, a studio fans have been waiting to hear something, anything, from for eons, finally emerged from its cone of silence today, but not to say anything about a new game. Instead, it announced a sorta-new, sorta-not-new costume for 2015’s Batman: Arkham Knight. If that sounds weirdly complicated to you, it’s because it is.

Today, developer Rocksteady announced that it’s adding the Earth 2 Dark Knight skin to the PlayStation 4 version of Arkham Knight on January 28. It makes Batman look like a roided-up Dracula who’s positively furious that you kept him awake in his casket all day with your incessant drum practice.

The skin’s journey to this point is a saga. Originally, the only way to obtain it was by redeeming a voucher from a 2015 PlayStation E3 event. Then, in 2016, it resurfaced as part of a brief Mountain Dew promotion. It wasn’t until last year that the skin became more widely available in the PS4 version of the Batman: Arkham Collection, which contained “definitive” versions of all three of Rocksteady’s Arkham games, including “all post-launch content.”

When the Arkham Collection was announced in July of last year, Rocksteady promised on Twitter that the Earth 2 skin would finally be available to everybody with a PS4 copy of Arkham Knight in January 2020. On January 28, the developer will finally make good on that promise.

Xbox owners, however, remain SOL. If you think they are taking this in stride, then I have a 100 per cent crime-free, definitely never-been-crimed-at house in Gotham City I’d like to sell you.