App Review: The Nerdiest Video Game Ever Made? Almost

Calculords for iOS is incredibly nerdy — and wonderfully so. It’s a lane-based strategy game. It’s a collectible card game. It makes the player actively participate in maths. There are few ways it could be nerdier — I have compiled a list.


For one, it could be crafted by the deft hands of Sean “Seanbaby” Reiley, the oft-mohawk’d comedic inspiration for anyone who has ever wanted to write about video games in a vaguely funny fashion. The fact that it is developed by that specific person is irrelevant.

Other ways Calculords could be nerdier:

Other than those four-ish reasons, Calculords is the perfect amount of nerdy. Just look at this screen: 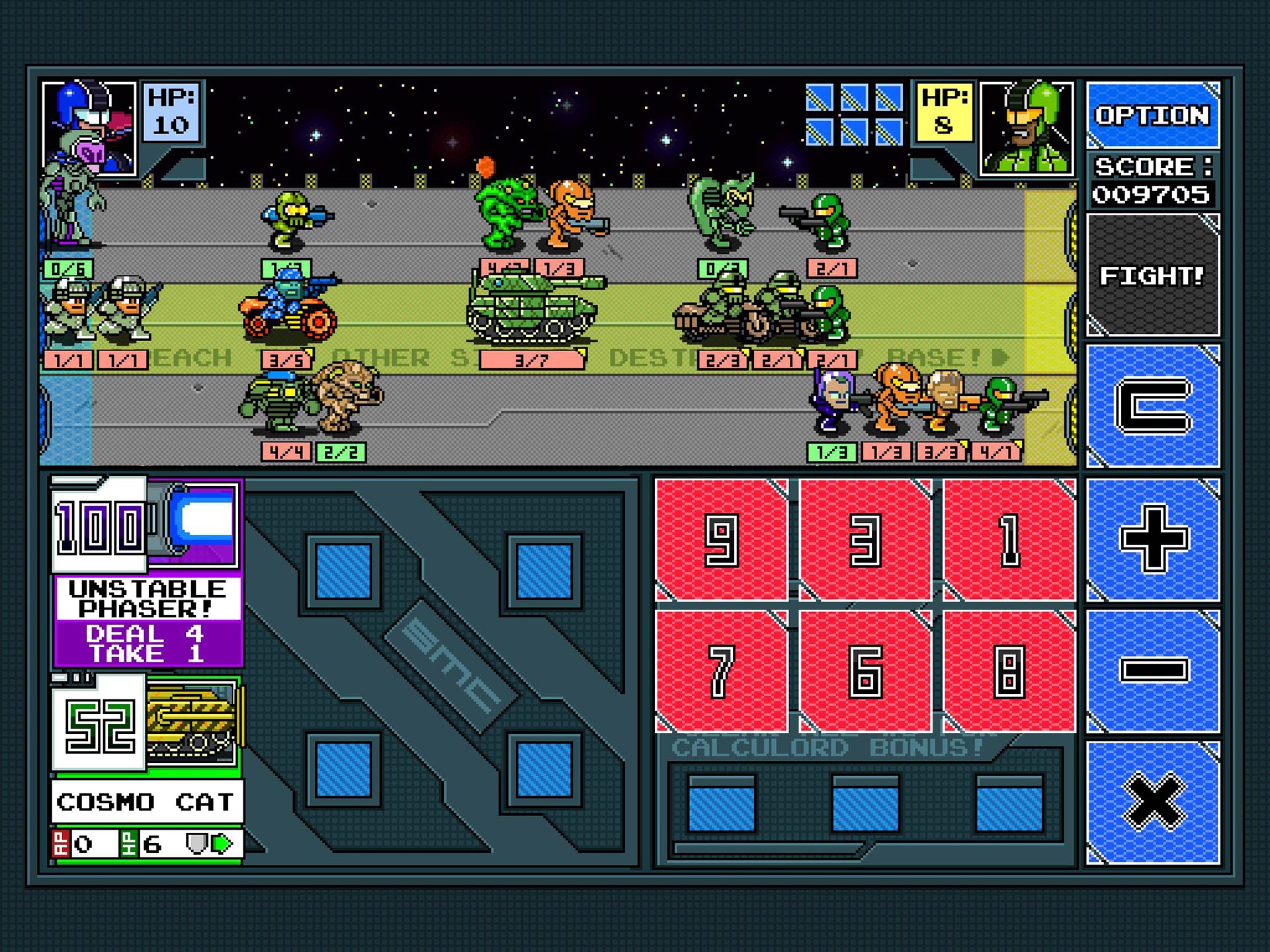 We’ve got three lanes, which the player and their AI opponents take turns populating with units, each with set values represent actions and defence. They slowly march forward until they clash in battle, or reach the other player’s side and attack directly, or get blown by unstable phasers.

The power of more than 200 unique cards awaits calculating strategists (YES), but only those willing to harness the power of maths will survive to save the universe from the evil Hate Bit.

See, you have to do maths. Plenty of maths.

Each card has a value on it. In the screen above, the Cosmo Cat’s value is 52. Can you add, subtract or multiply the numbers on the right to get 52? Take your time, I will wait.

Perhaps you came up with (8-1) x 7 +3. That will certainly give you 52, which can then be used to deploy the Cosmo Cat. But if you can somehow use every number on the board up with no remainder, you’ll score a bonus and a whole new set of numbers to use. So, (6+1) x 7 + 3 x (9 – 8) also equals 52, the board is clear, and you feel much better about yourself. It’s just like maths class, only in space, with the fate of the universe at stake, and your opponent is constantly ragging on you for how long it takes you to perform your sums. So yeah, exactly like maths class.

Beyond the battle there is deck editing to do (always a pleasure), upgrades to earn, strategies to plan, and time to bone up on your basic arithmetic online because damn, I was rusty.

Seanbaby, on the other hand, is not bad with his maths. In fact, he’s managed to figure out how to charge absolutely nothing for a game and still make gobs of money without insulting anyone too terribly. 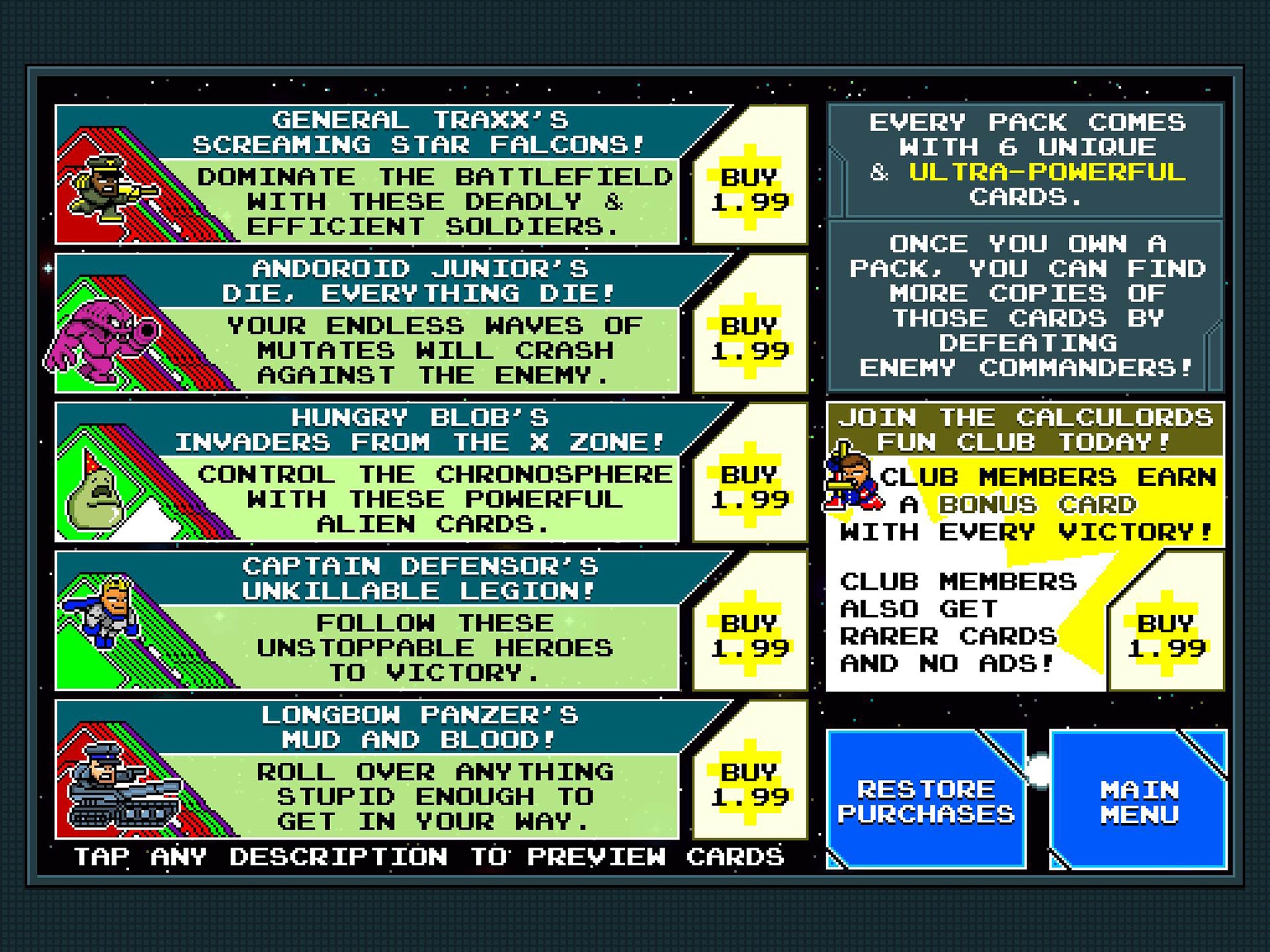 One $US1.99 in-app purchase disables ads and gives players a chance at scoring rarer cards. Another buys one of six packs of ultra-powerful cards, the contents of which are added to the loot drop table for enemy commanders once money has changed hands. There are no energy meters, and no arbitrary timers. Just lovely pixel art, dramatic music, cards, cruel jokes, strategy and maths.

That about sums it up. All we’ve got left is one final maths pun (see previous sentence) and a heartfelt recommendation that anyone who has ever dreamt of the awesome power of maths give Calculords a try.