Machines Can Now Read The Internet, Make Our Arguments For Us 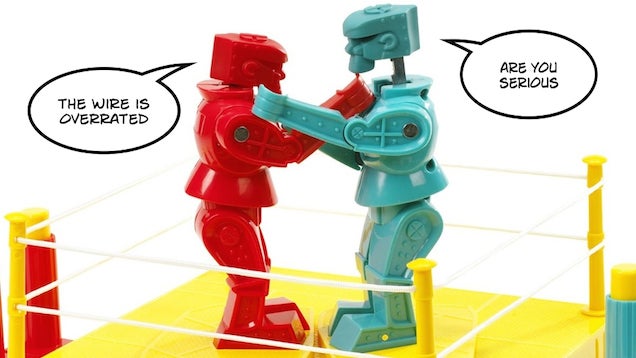 Today on The Singularity Watch: A computer program that can scan the internet for multiple arguments on a complicated topic, distill the various sides of the debate, and argue both sides against one another.

In this video shared by the Milken Institute, we see a demo of IBM's Watson supercomputer. In addition to being really good at Jeopardy, Watson can help you better understand an internet debate by synthesizing the issue and regurgitating pro/con arguments.

At the 47-minute mark, the computer debates the idea of banning the sale of violent video games to minors. The arguments it lays out may be pretty simplistic, but this is just a start. (I'd suggest it give Jason's article on the subject a glance.)

I guess the assimilation of internet arguing is just one more way that humans will eventually be rendered obsolete by computers. I can picture it now:

Computer Mastermind: Choose, puny human. Choose a topic and I will argue both sides, rendering pathetic mammals like you obsolete once and for all!

Human: I can choose any topic, and you'll argue both sides?

Computer Mastermind: Do your worst. You cannot comprehend the vastness of my intellect.

Human: Very well, I choose: "Which game console is better, the Xbox One or the PlayStation 4?"

Human: You doing ok there? I'm seeing some smoke or something.

Human: Looks like there are some arguments you still can't quite handle, motherf**ker.