Thousands and thousands of videos, uploaded nearly every day. Each one is the same, structure-wise: 10 slides of shapes, shown over 11 seconds, over various random tones. Nobody has a clue what the videos are supposed to be, much less who is uploading them or why.

Just today, the channel has uploaded over a dozen bizarre videos. The video leading this post, however, is the very first video that Webdriver Torso uploaded to YouTube.

It's the type of randomness that almost makes the YouTube channel, called "Webdriver Torso", seem like the horse_ebooks of YouTube. But the eeriness of the videos means they might feel closer to "numbers stations", radio frequencies that carried spy codes during the cold war.

Attempts to contact the creator have proven useless. At one point, the internet even thought they nailed what was happening: supposedly, the videos were being uploaded by a company that wanted to test video stuff out... but even that proved to be a dead end.

Everyone has theories, of course. Some are even outlandish: maybe the videos are someone's attempts to communicate with aliens? It doesn't help that among the 77,000+ videos uploaded by Webdriver Torso, there will occasionally be abnormalities. For example, there is one video of the Eiffel Tower amidst the thousands of videos of random blue and red shapes. The YouTube channel has even commented once: "Matei is highly intelligent."

...nobody knows what the crap that means either. Watching lots of videos uploaded by the station doesn't really help either.

The latest theory surrounding Webdriver Torso ties Google into the whole mess. If you search "webdriver torso" on YouTube, the entire page will look something like this: 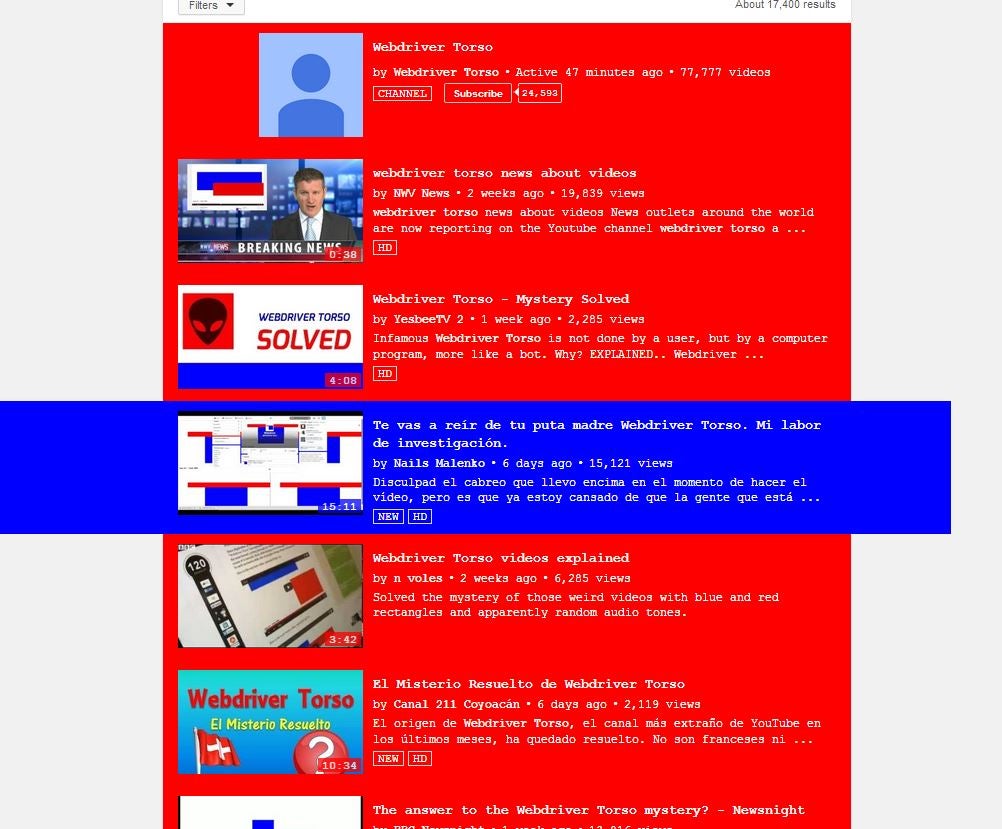 That in of itself doesn't mean Google is behind it, of course — it simply means they're aware of the phenomenon. But following a number of YouTube and Google Plus accounts tied to channels which upload similar videos to Webdriver Torso eventually leads you to Google employees, according to The Daily Dot. Still, it's mostly speculation: nobody actually concretely knows what is going on here.

Whatever it ends up being, be it marketing stunt, alternate reality game, a company that is automating something for boring purposes, will probably not live up to the compelling nature of the Webdriver Torso mystery. I'm kind of hoping we never find out what's going on here. But do let us know your theories, if you have any!