Blade & Soul Has No Teens Or Harems, Just Action And Vengeance

When I talk with older anime fans, the biggest complaint I hear is that everything has become nothing but moé, angsty, high school, love-harems. They claim they want exciting action shows with an adult cast and grown-up stories. To those people, I say this: "Blade & Soul is the anime for you." 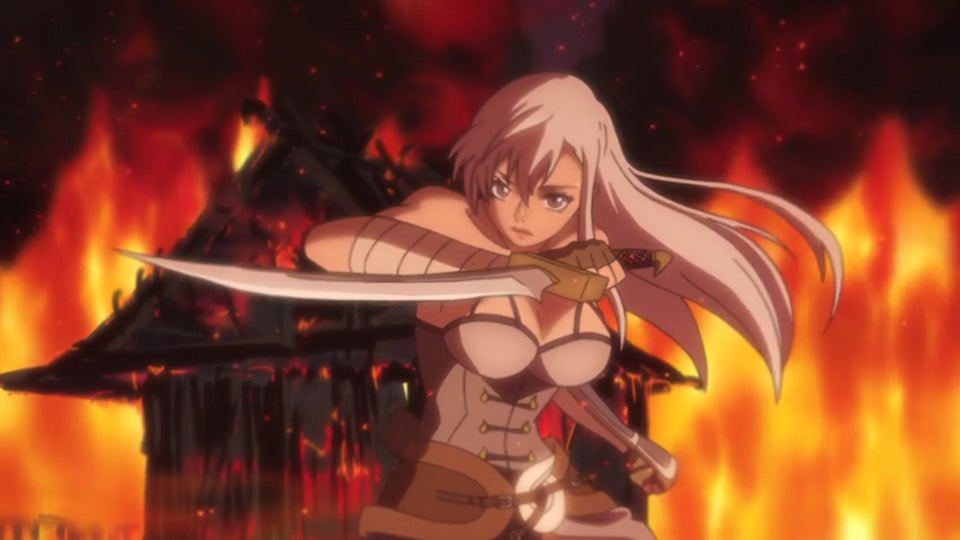 Blade & Soul is the story of Alka, the last living assassin of the Clan of the Sword. Her mission? Vengeance against the dark, magic-wielding warrior Jin Varel and her companions — the ones responsible for the death of her master.

Nearly every episode of Blade & Soul has some sort of action climax. As a wandering assassin, Alka finds herself as everything from hired thug to bodyguard as she continues her quest to hunt Jin Varel. Jin Varel and her companions, on the other hand, are also hunting Alka; so when the two forces clash, you're always guaranteed an awesome — and often brutal — fight. 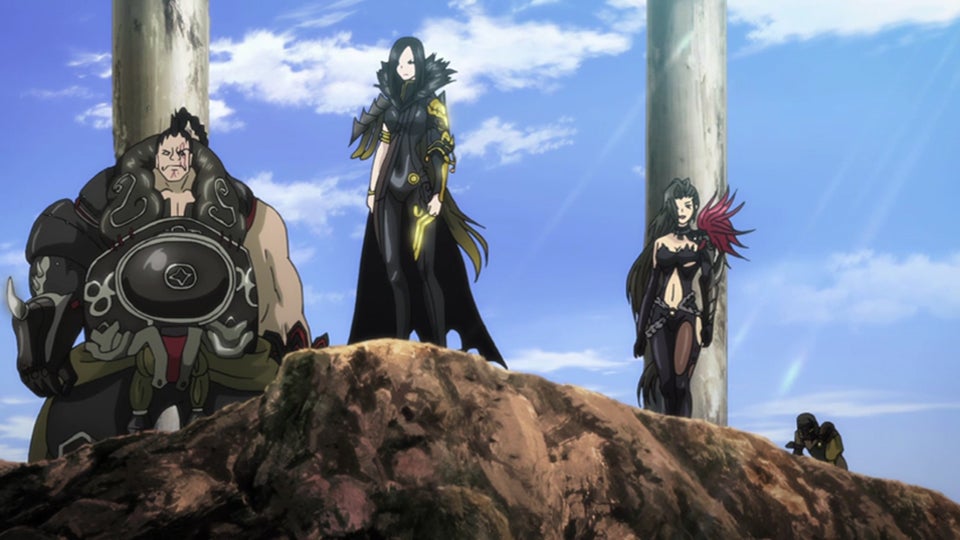 Not to put too fine a point on it, but Blade & Soul is blessedly free of modern anime's most common clichés. There is no high school setting. No teenage heroes. No endless will-they-won't-they romance. No moé-invoking characters. No harems. No tsundere, dandere, kuudere, or yandere. If you have been searching for an anime that avoids these common tropes, Blade & Soul is the anime for you. 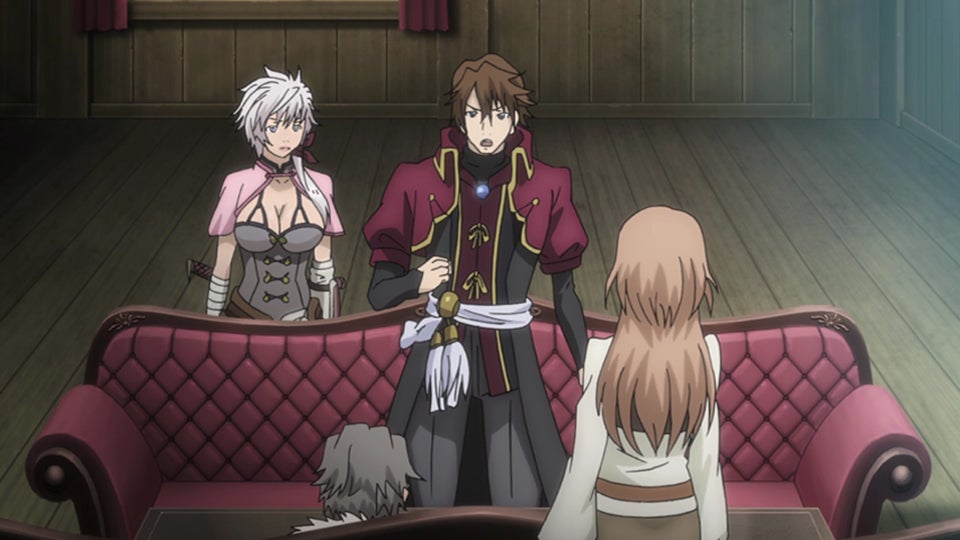 Simply put, each episode in the series is built around exploring an aspect of the series' major theme: vengeance. Thus this anime looks at the victims of vengeance, causes of vengeance, the cycle of vengeance, the losses caused by vengeance, and brutal ways to attain vengeance — just to name a few sub-themes. And as you'll learn rather quickly from watching, vengeance never works out for the better — not for anyone involved. Because of this, Blade & Soul is often a quite dark anime.

Good — A Journey from Empty Shell to Human Being 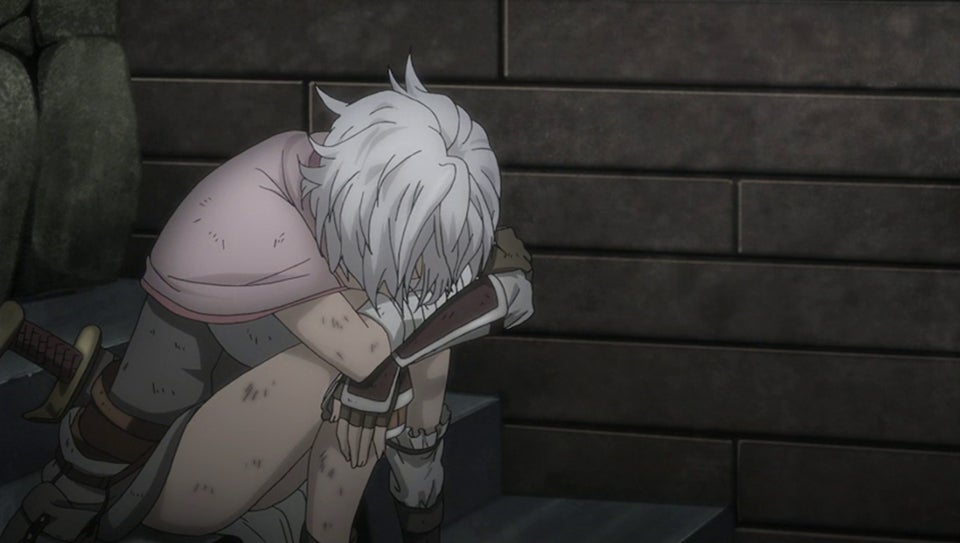 As she is rarely the focus of the episode, Alka often seems like a supporting role in her own story. However, what is important is how these various self-contained stories affect and change Alka. At the start, Alka is an empty, emotionless shell. She knows how to kill and has the assassins' code to live by. She's not even after vengeance against her master's killer for any other reason than the code demands it — she has no emotional stake in the whole endeavour.

Thus, the anime as a whole is Alka's journey from walking tool of death into a thinking, feeling person — from "blade" to "soul" if you will. The tragedies and rare successes she witnesses change her, prompting her to contemplate and grow. Of course, while opening up to your emotions can be a powerful, wonderful thing, Alka also discovers the crippling emotional pain that comes as the flip side of the emotional coin. 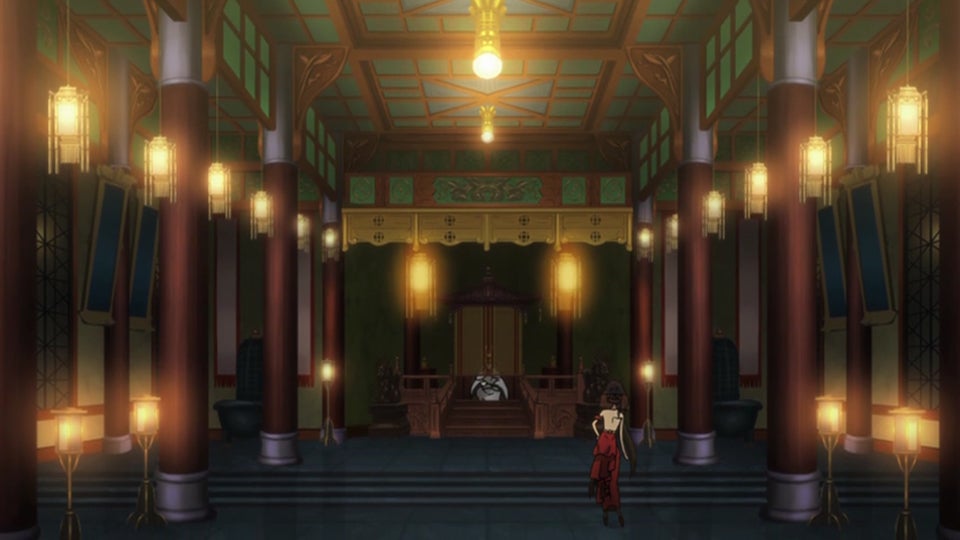 As Blade & Soul is based on the Korean MMORPG of the same name, it comes packed to the brim with its own history, lore, and detailed setting. It is clear that what we are seeing is only a small part of a much bigger, world-spanning story. Not even Alka or Jin Varel are particularly important in the overall scheme of things. But because the world is so well constructed, there are numerous details in every scene that make the world come to life. All in all, it becomes a living, breathing world. 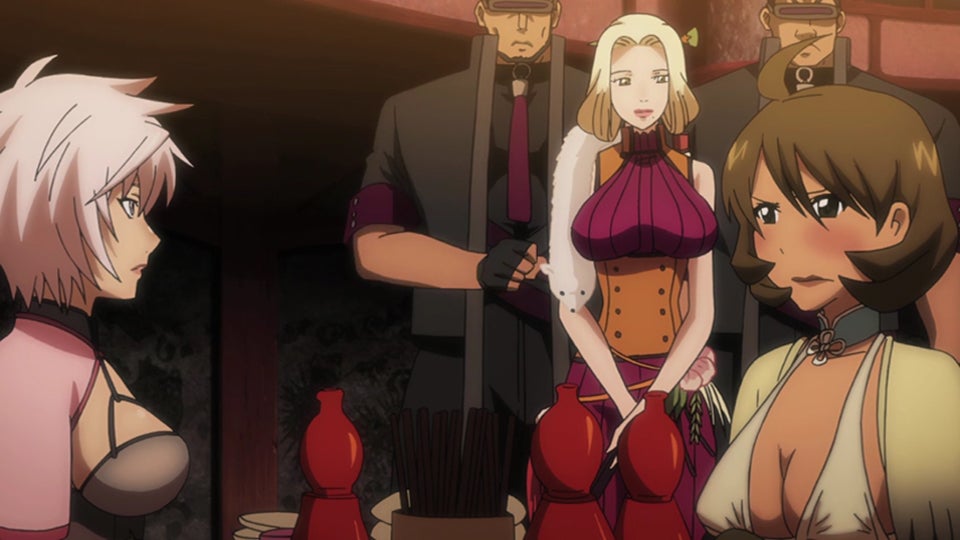 Except for the final episode (which we'll get into later) Blade & Soul is not an anime that highlights its fanservice — i.e., the camera does not exploit every possible opportunity to zoom in on the female cast's T&A. Of course, that doesn't change the fact that several of the main female characters wear outfits that leave little to the imagination. The series is not without the occasional boob bounce either. But when it comes down to it, if you are used to typical "female fantasy armour," this probably won't bother you much.

Mixed — You've Seen a Lot of This Before 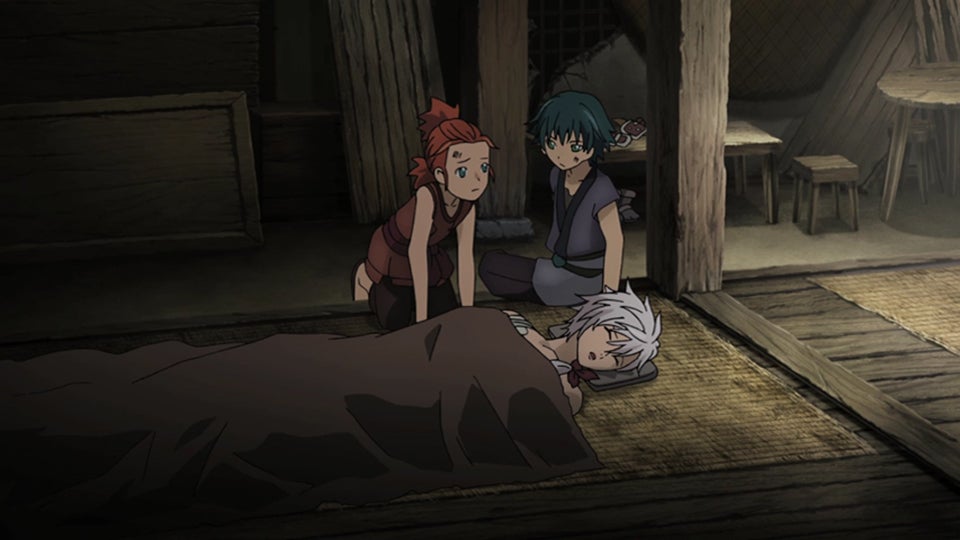 While Blade & Soul steers clear of the most common current anime clichés, that doesn't mean the story is completely original — far from it. How many times have you seen the "student must avenge the master's death" plot, after all? Moreover, each of the self-contained episodes have a story that is at least somewhat familiar.

The world of Blade & Soul is basically that of your average samurai/western work — i.e., a wandering main character travels across the frontier, getting involved in complex situations where there is no concrete good or evil to be found. If you have ever watched the spaghetti westerns of Sergio Leone or the samurai films of Akira Kurosawa, you probably know what kind of tone and plot to expect in Blade & Soul.

Of course, just because you have seen much of it before doesn't mean it's bad. Rather, this familiarity allows the series to tell complete, complex stories in just 22 minutes — and still manage to develop Alka and the other reoccurring characters on top of that. 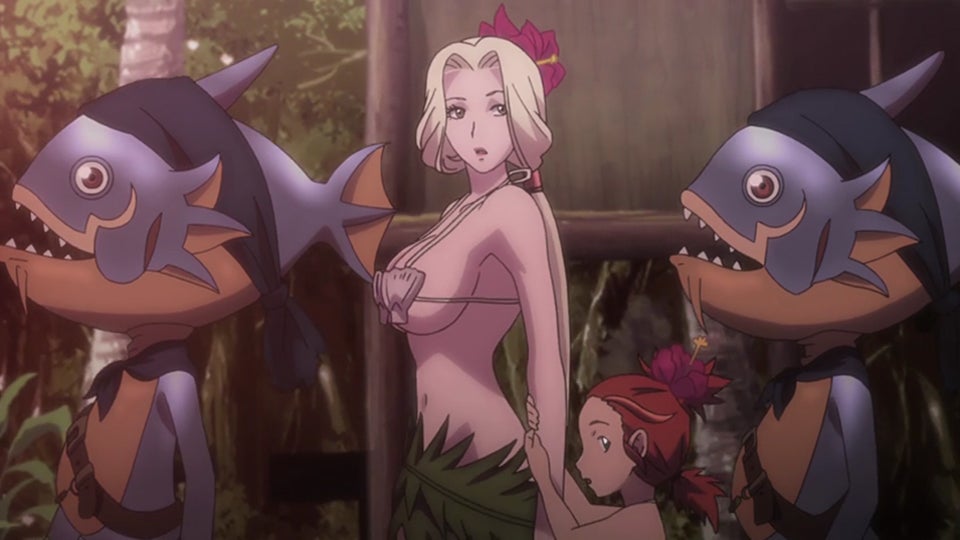 Almost every anime has the "fanservice episode" — you know, the one where they go to the beach, pool, or hot spring, or perhaps the females wear some sort of festish-tastic outfit like a playboy bunny costume. And as they are so prevalent in anime, I wasn't surprised to see one in Blade & Soul. What did surprise me was where in the series it was placed.

Often, fanservice episodes happen midway through the series. They tend to be a way to give a lighthearted break after some major climax. Of course, in a show as serious and dark as Blade & Soul, having a fanservice episode midway through the series would destroy the tone and interrupt the carefully crafted thematic exploration. Fortunately, the series' creators realised this and thus put the fanservice episode at the end of the series. So you get the whole serious tale uninterrupted and then finish it all off with a silly epilogue. If we have to have an episode like this, I'm glad to see it put after the end where it can do no harm. 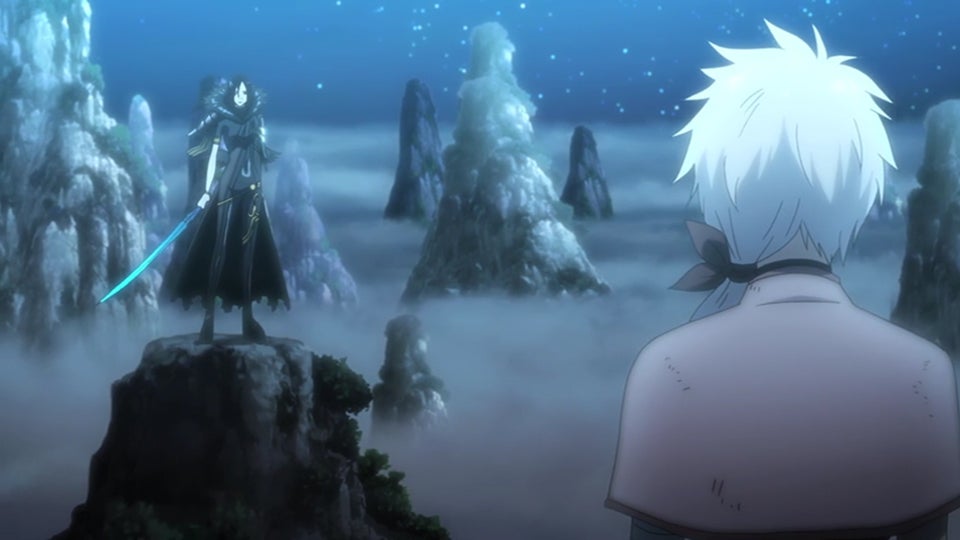 In the world of modern anime, Blade & Soul is a welcome palate cleanser, free from all the common tropes that permeate the medium. It is a series for adults, by adults and is interested in exciting action and deep explorations of the concept of vengeance and the themes surrounding it. If this sounds like your cup of tea, then you should definitely give Blade & Soul a watch.

Blade & Soul aired on TBS in Japan. It can be viewed for free with English subtitles at Crunchyroll.