Getting Started With The Pokémon Trading Card Game 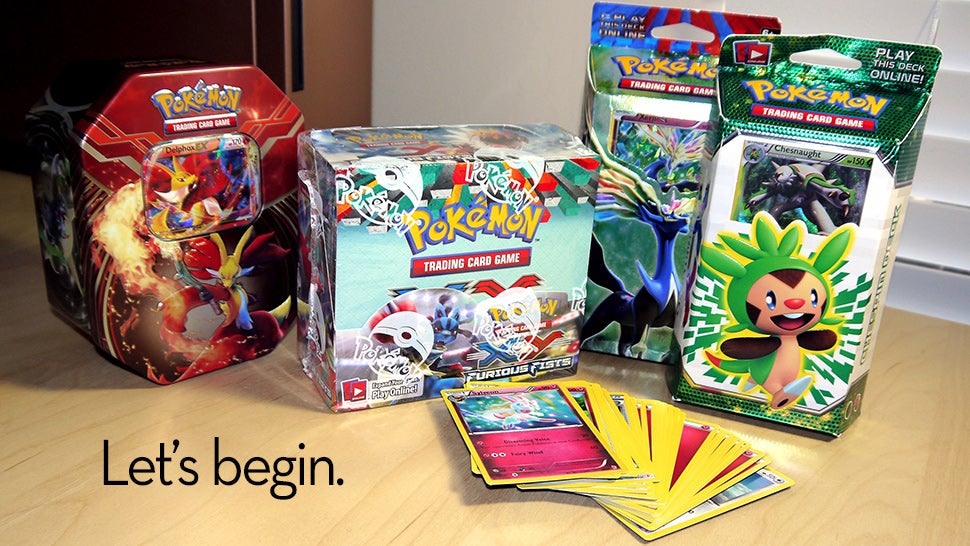 Every year I watch the Pokémon National Championships, and every year it gives me the itch to return to the Pokémon Trading Card Game something fierce, but with store shelves flooded with countless colourful card packs, I didn’t know where to start. So I turned to The Pokémon Company for help.


Why did I need help? Because this is what the Pokémon Trading Card Game section of my local Walmart looks like: 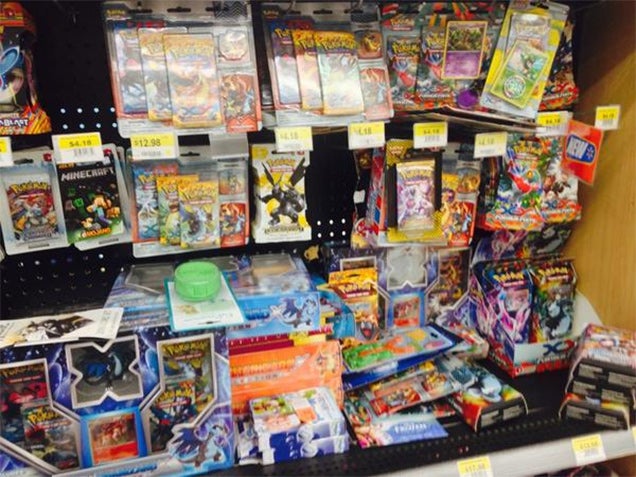 It’s a whirlwind of boosters, pre-built decks, booster bundles with flippy coins, special box sets, some Minecraft cards. I’d stand in front of this display twice a week during shopping and toy runs. I’d pick something up, read the back, put it back down. Every now and then I’d put something in my cart, only to return it on the way to checkout later.

So yes, I needed help.

Mind you the help I needed wasn’t on how to play the game. After consulting with professional Pokémon TCG player Kyle Sucevich (The Pokémon Company got us in touch), we agreed that the easiest way to learn was the Pokémon Trading Card Online service, whether on PC, Mac or as of today, iOS. 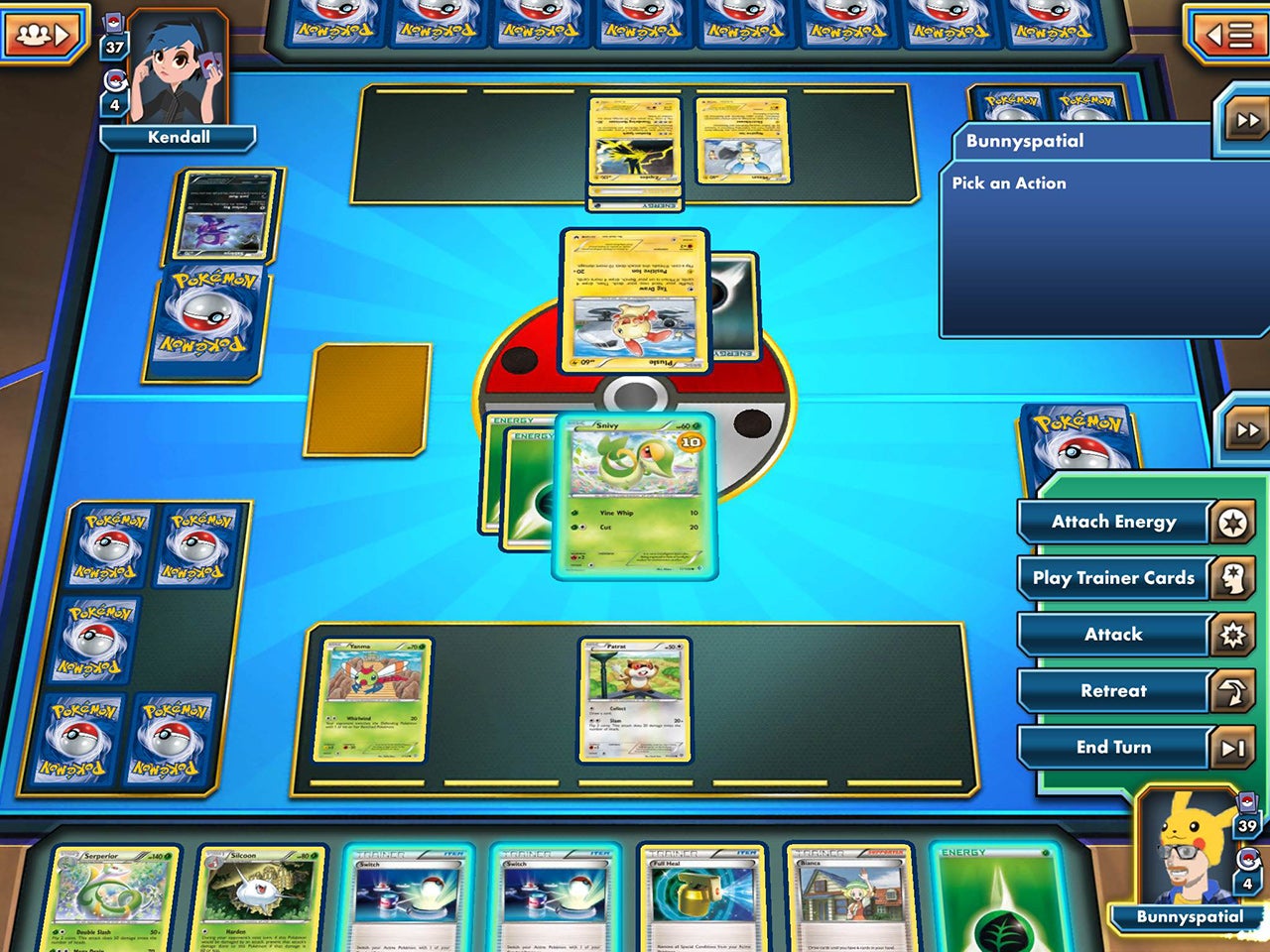 Within an hour of starting you’ll be stacking up dozens of colourful virtual cards every turn, just like the pros. Best of all, every recent pre-made deck you purchase comes with a code to add it to your inventory in the game, while every booster pack comes with a code for a fresh random selection of cards.

No, I just wanted to know where to start exchanging small snippets of my children’s college fund for physical cards. Realising there’s a huge difference between letting a computer do all of the computation and doing it in your head, I opted to begin with the Pokémon TCG XY Trainer Kit. 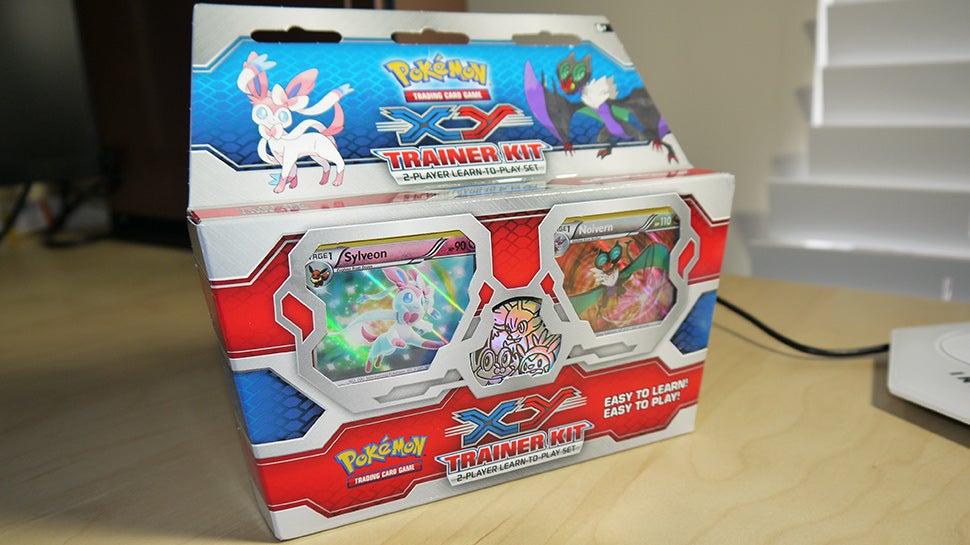 Available for around $US12 in finer seedy super stores, the Trainer Kit is specifically designed to communicate the very basics of the game. It contains two 30-card decks (60 is the norm), a play mat showing new players which cards go where, a flippy coin, a set of cardboard counters (to keep track of damage and status ailments) and a lovely little deck box to keep everything in. 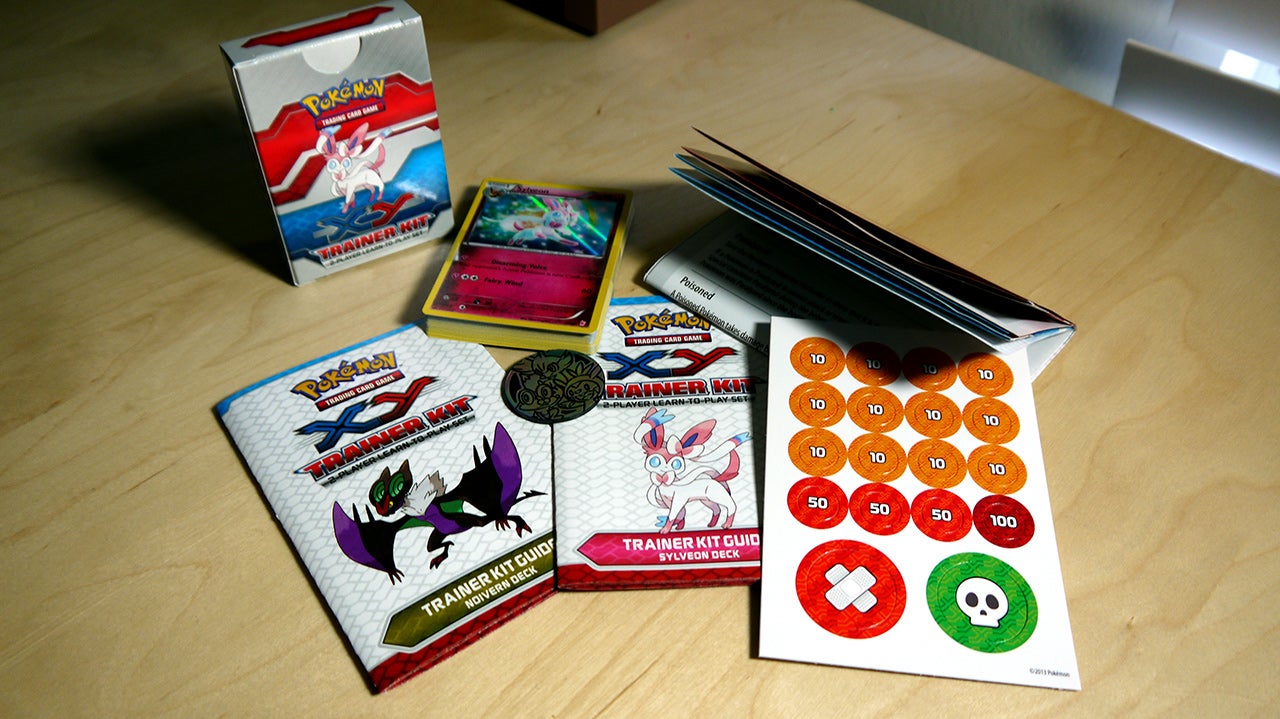 Most importantly, the Trainer Kit comes with a set of step-by-step instructions telling each player exactly which cards to play when, and why. It’s like performing a Pokémon Trading Card Game play. Go through it a few times, and you’re ready for some improv.

It’s the perfect time to move on to starter decks, of which there are many to choose from. I narrowed my first choices down the same way my initial choices in Pokémon X and Y were narrowed down. 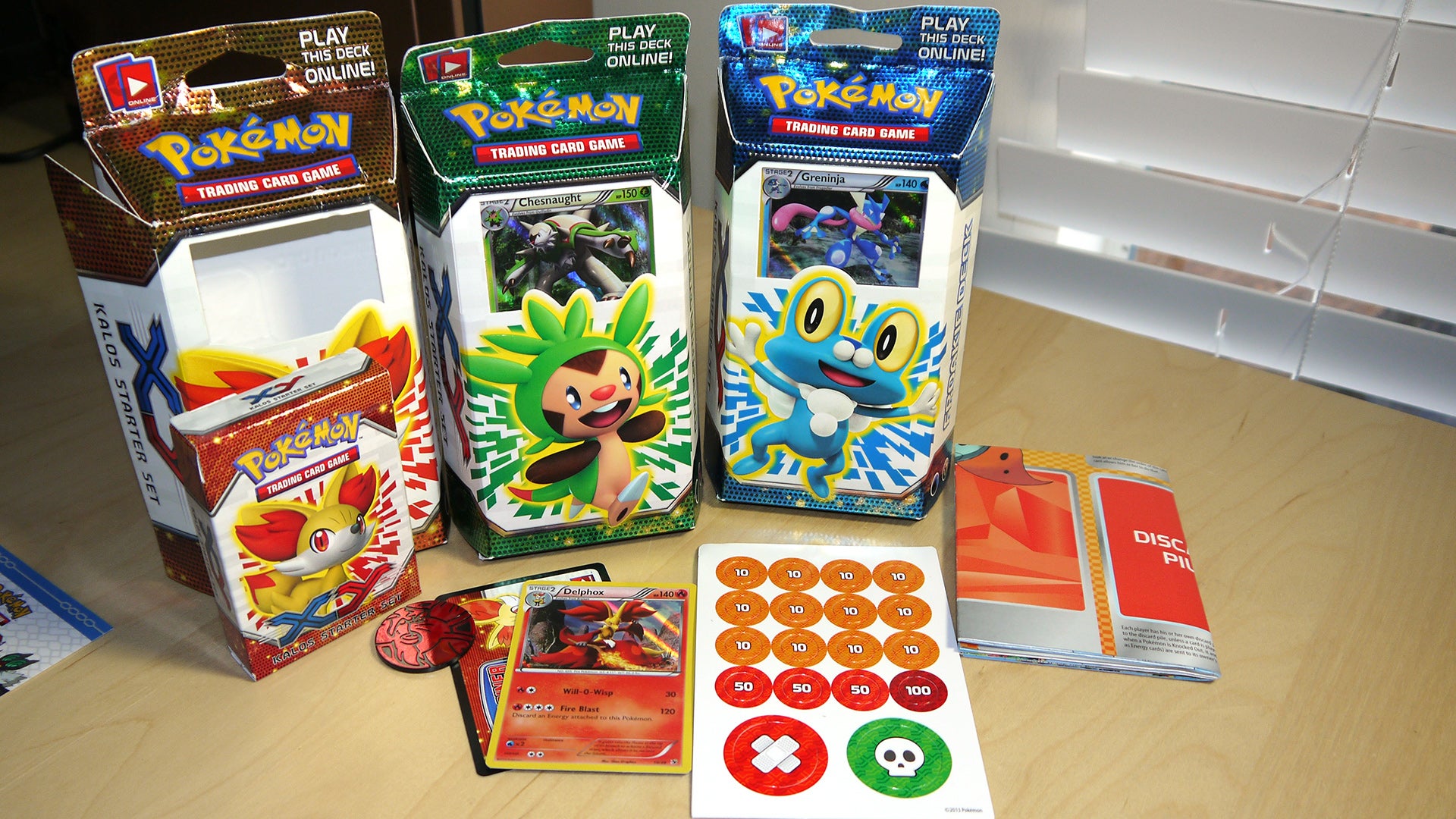 Froakie, Chespin and Fennekin — the choice of a new generation. The three Kalos starter decks can be a bit hard to find, at least online, and you may wind up paying a premium for them. Still, nothing eases you into a long journey than reuniting with an old friend. Just like the games, each of these decks allows you to battle your way up through your starter’s evolutionary chain, only now the next stage is only a turn away, rather than hours wandering through tall grass.

Each starter comes with a 60-card deck, counters, a play mat, that old flippy coin and a lovely deck box. My Chespin box proudly proclaims “I am new at this and I love grass squirrels. Please do not come at me with a fire deck.”

Once you’re comfortable with a dual-element starter deck, it’s time to live a little. Mix things up. 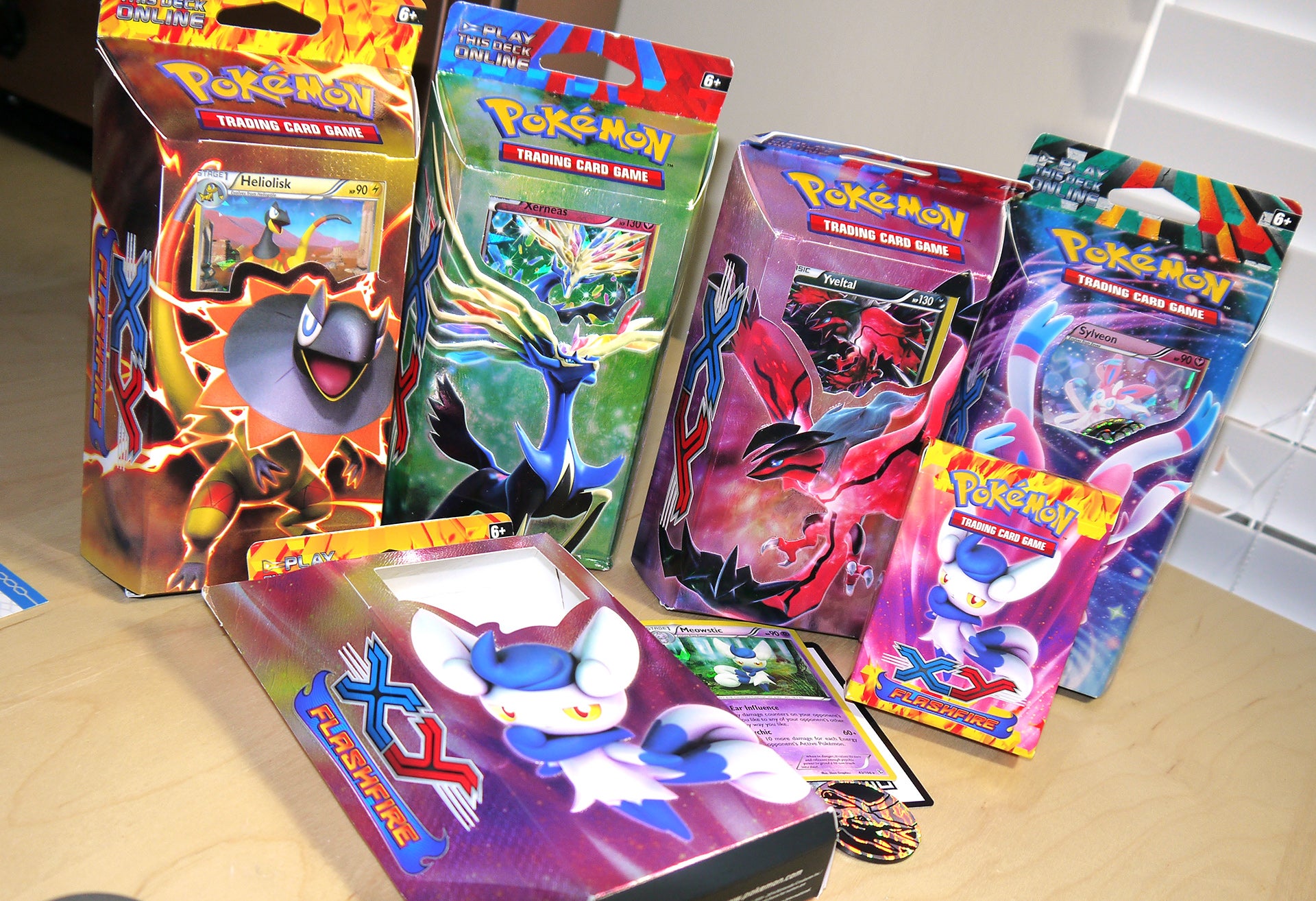 Available all over the damn place right now starting around $US12, theme decks are wonderfully colourful boxes with cool names like “Brilliant Thunder”, “Mystic Typhon” and “Destruction Rush.” These decks are carefully crafted around specific strategies, and they’re excellent for giving newer players a taste for the thoughtful strategy that goes into building your own deck. Each plays very differently, each contains the seeds of bigger and better techniques.

From the back of the deck box:

It never rains but it pours for your opponent when you bring the Mystic Typhoon theme deck into battle! Muddle your opponents; minds with Meowstic’s Ear Influence attack, and turn a tide of damage upon them with Walrein’s Big Tusk! Keep the Energy flowing with Milotic’s sacrificial Energy Grace ability, and dig up more cards to create the perfect story with Furret’s Buried Treasure Hunt before unleashing waves of fury boosted by the Muscle Band Trainer card. Can anymore weather your storms?

It’s so full of hype, but it also touches on exactly how the deck feels when everything goes your way. Theme decks made me hungry to create a deck of my own, but I’m still struggling. Notice I haven’t mentioned buying all of the booster packs. 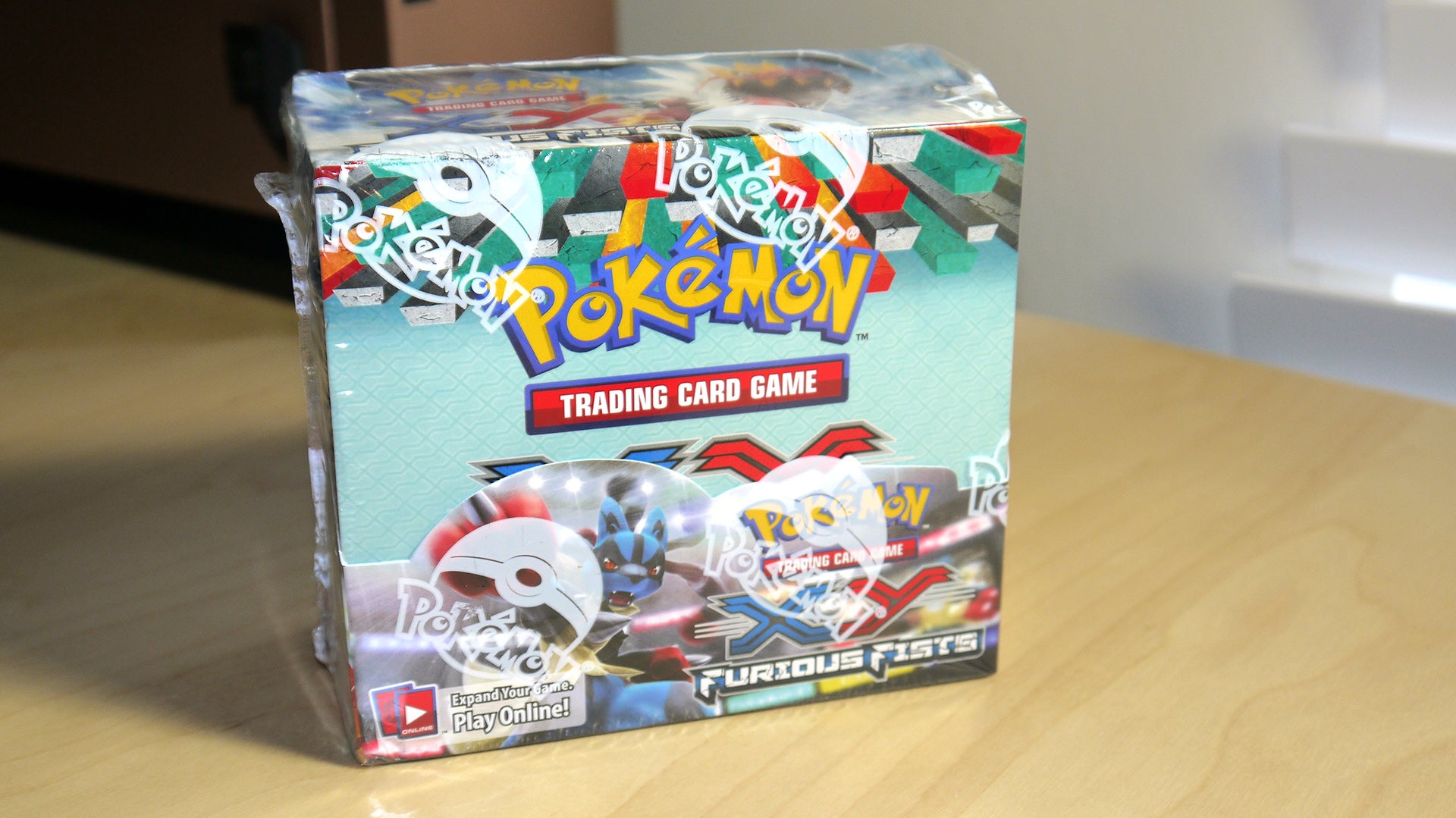 That’s because this box here, a sealed pack of Pokémon Trading Card Game “Furious Fist” booster packs, terrifies me. Having spent years tearing into packs of cards from other games in hope of finding just the right addition to my deck, I’ve grown wary of falling into the “buy all boosters” trap. That, and if I wind up with that many cards all at once, my collector’s instinct will kick in and I’ll go buy binders so I can compulsively catch them all.

Random chance is no way to build a competitive deck. Most competitive players supplement their killer decks with cards purchased as singles online. In the long run it’s probably cheaper.

But we’ll go deeper down the deck building hole at a later date. For now, you should have a fairly good idea which direction to go in should you want to make your relationship with the Pokémon Trading Card Game physical.