Ever since DC began its Rebirth initiative, one giant mystery has hung over its comics: Just how the hell do the Watchmen play into the new DC universe? Today’s Batman is the first issue in the saga that promises to reveal this mystery. It’s light on revelations, but it already has us asking even more questions.

Batman #21 — by Tom King, Jason Fabok, Brad Anderson and Deron Bennett — kicks off “The Button”, a new storyline that follows up on something lingering from the very end of the Rebirth special all those months ago: Just what was up with the Comedian’s bloodstained button showing up in the Batcave? 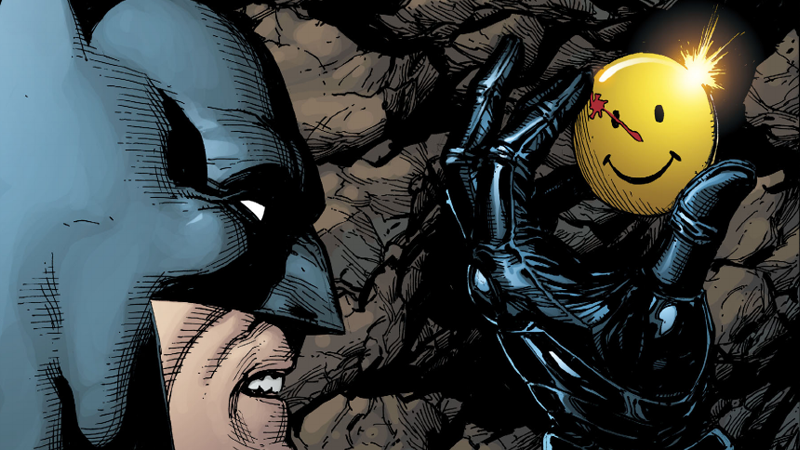 Batman suddenly discovers that the weird radiation the little trinket has been giving off since it showed up has the power to rip open the fabric of reality itself. That makes sense, given that we know it’s from a separate universe — whichever one Watchmen actually took place in. But for Batman it’s a surprise, as the button sparks when it gets close to the nearby mask of the Psycho-Pirate (who has a long history of surviving DC reboots with his memories intact, and who Batman’s been dealing with as part of the comic’s ongoing story), giving Bruce a tragic, fleeting glimpse of another reality… 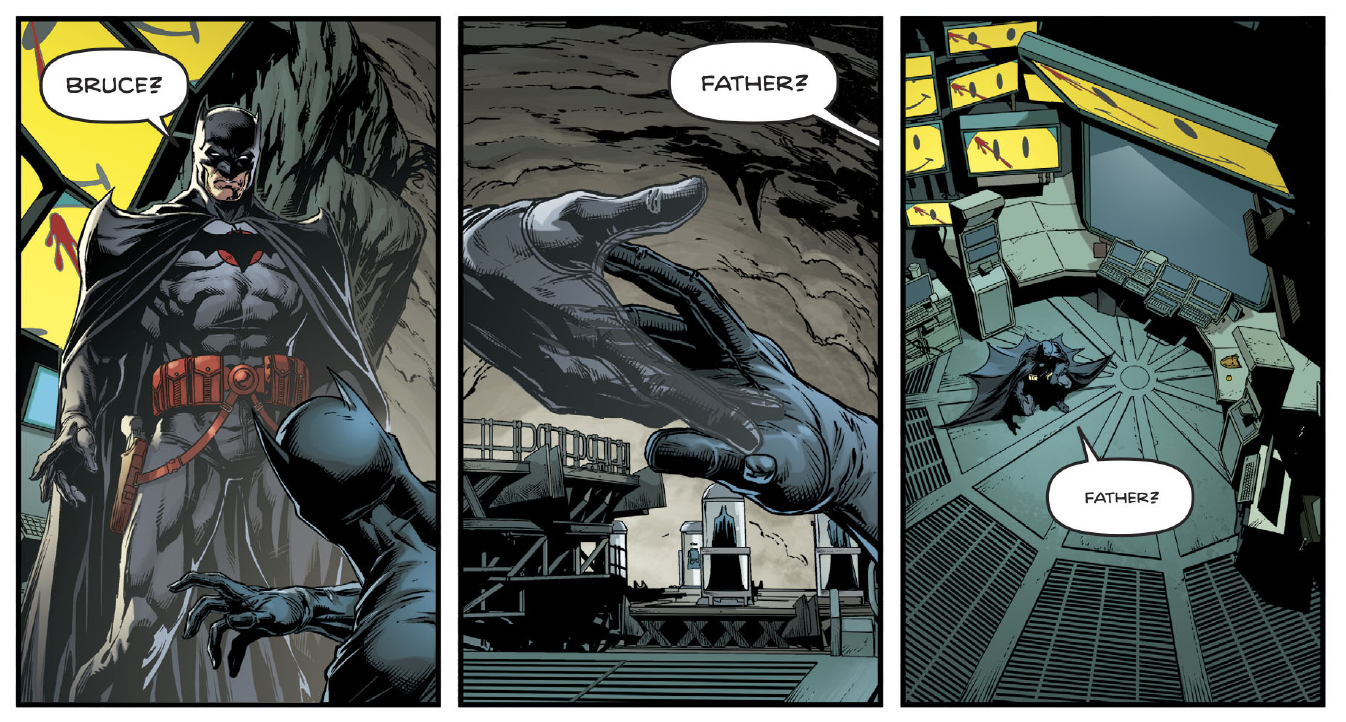 …and a brief encounter with his father, Thomas Wayne. Or, more specifically, the Thomas of the Flashpoint reality, who sacrificed himself to help bring about the New 52 universe six years ago. Naturally, this spooks Bruce enough to get in touch with Barry Allen — his sole confidant about this weird button and what it might mean for the Speedforce and for the universe — but it isn’t actually the Flash who comes to his aid at first. It’s the longtime Flash enemy Zoom, who is suddenly very much intrigued by what the Comedian’s button showed Batman. 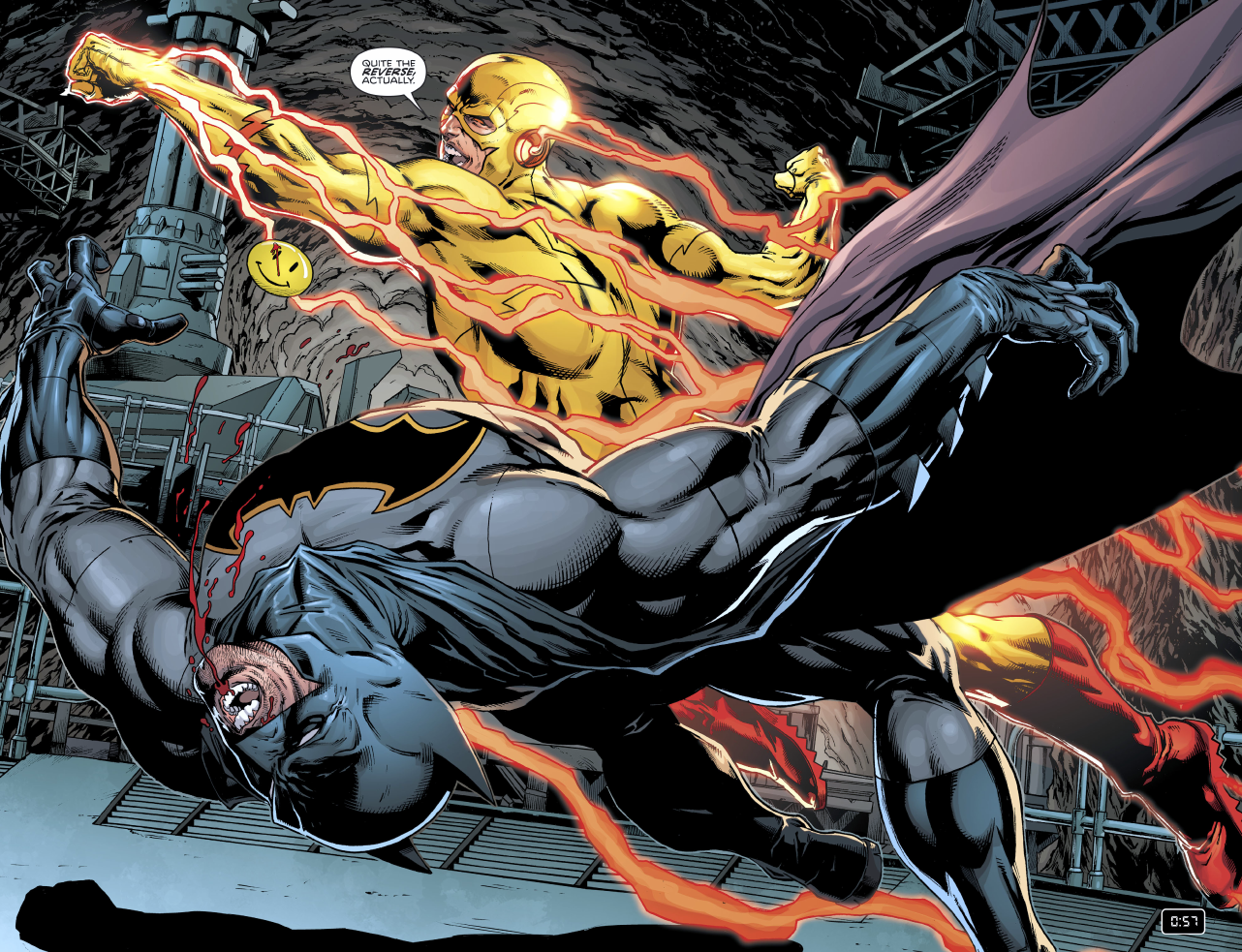 Quick recap: Eobard Thawne, AKA Reverse-Flash, AKA Zoom, originally died in Flashpoint all those years ago, but has recently returned to existence mysteriously in the pages of The Flash #19 — with the knowledge that Flashpoint happened and that he died during it.

It can’t be a coincidence that this is happening immediately after all the very weird stuff that’s been going on in Superman and Action Comics recently. If you’ve been following that, you’d know that recently two different incarnations of Superman — his New 52 self and the pre-Flashpoint version that took over being Superman when the New 52 version died — merged into one unified being, with one tweaked origin, utilising parts of both timelines. The new Superman’s impact on how the DC universe exists seems to have only just begun, and even Dr Manhattan has noticed it all while hanging out on Mars. 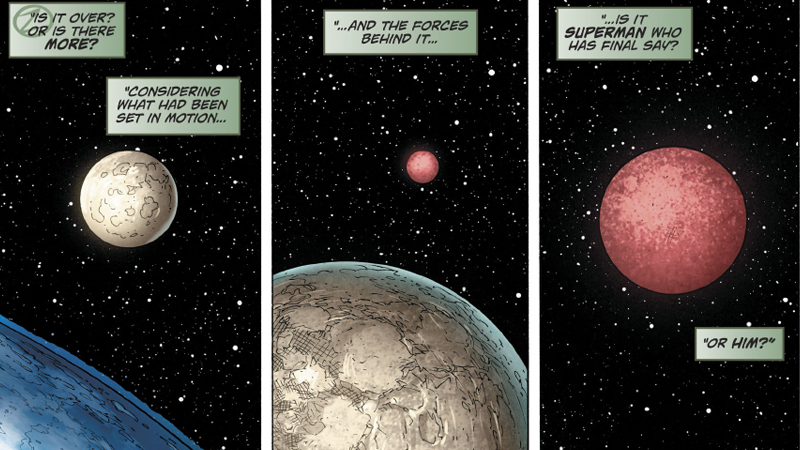 That presumably includes the return of Thawne, and also why the Comedian’s button has suddenly started discharging multiversal energy. But for now, all we know that Zoom is onto the button’s mysterious power, and Batman is in his way. In the minute it takes Barry to reach the Batcave, Zoom beats the shit out of Bruce to try and find out what he knows. 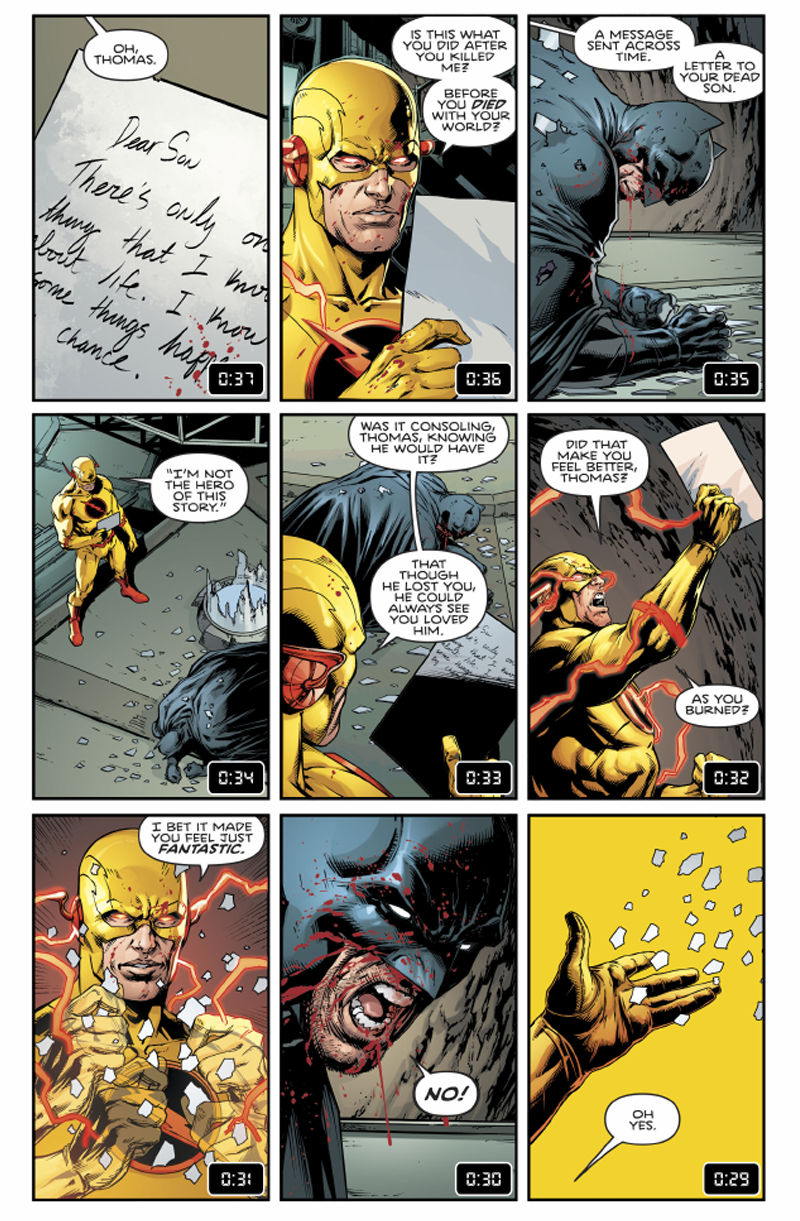 It’s pretty painful; for every brief second Batman outsmarts Zoom, he takes a horrific, bloody blow, and even loses the letter his Flashpoint father sent him. When all seems lost, though, with Batman out cold and Zoom in possession of the button… something happens. The villain and the button blip out of existence in an all-too-familiar flash of blue light. And when Thawne returns, he’s half the man he was. 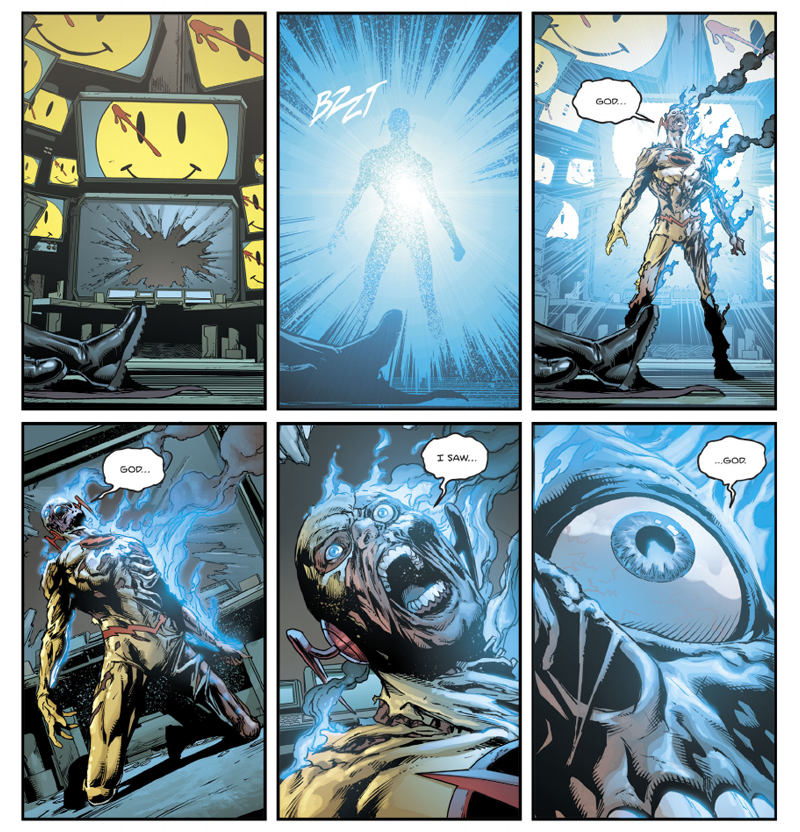 (Literally, because he’s a decaying husk.)

As he burns away, his last words are that he’s seen the face of God himself. The teleport, the blue glow, the connection to the button — the implication is that the god Thawne has encountered is actually Watchmen‘s Dr Manhattan, teased as being responsible for the heroes of the DC universe losing a decade of their lives. And this god has re-wiped Eobard Thawne out of existence.

When Barry Allen finally arrives after what has been the longest minute in DC comics history, all he finds in the Batcave is a bloodied Batman, the scraps of one of his greatest enemies smoking on the ground, and no little smiling button in sight. 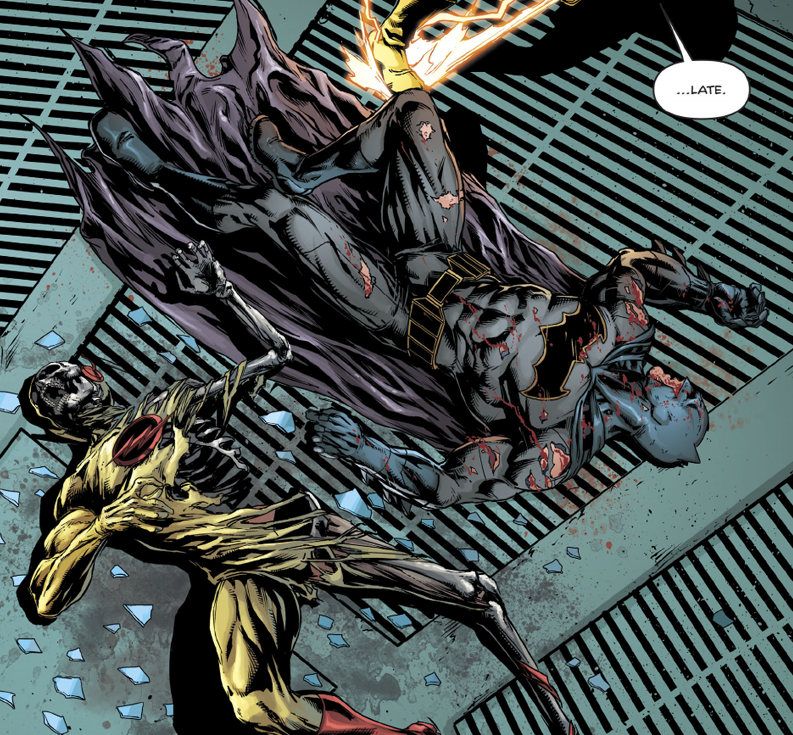 There’s still so many questions that need answering, of course: What was Zoom’s deal? Was it really Manhattan that killed him, and if so, why? What power does the Comedian’s button really hold? How much has Superman’s merging impacted the DC universe? What the hell is up with the weird hockey match that opens the issue, and why does the death of one of the players on the field have to do with the Legion of Superheroes first teased at the start of Rebirth?

At any rate, the biggest mystery of DC’s Rebirth has finally begun in earnest today. Only Dr Manhattan knows where it’s going to take us, but it’s going to be one hell of a weird multiversal ride.