batman and the signalcomicsdcdc comicsthe signal 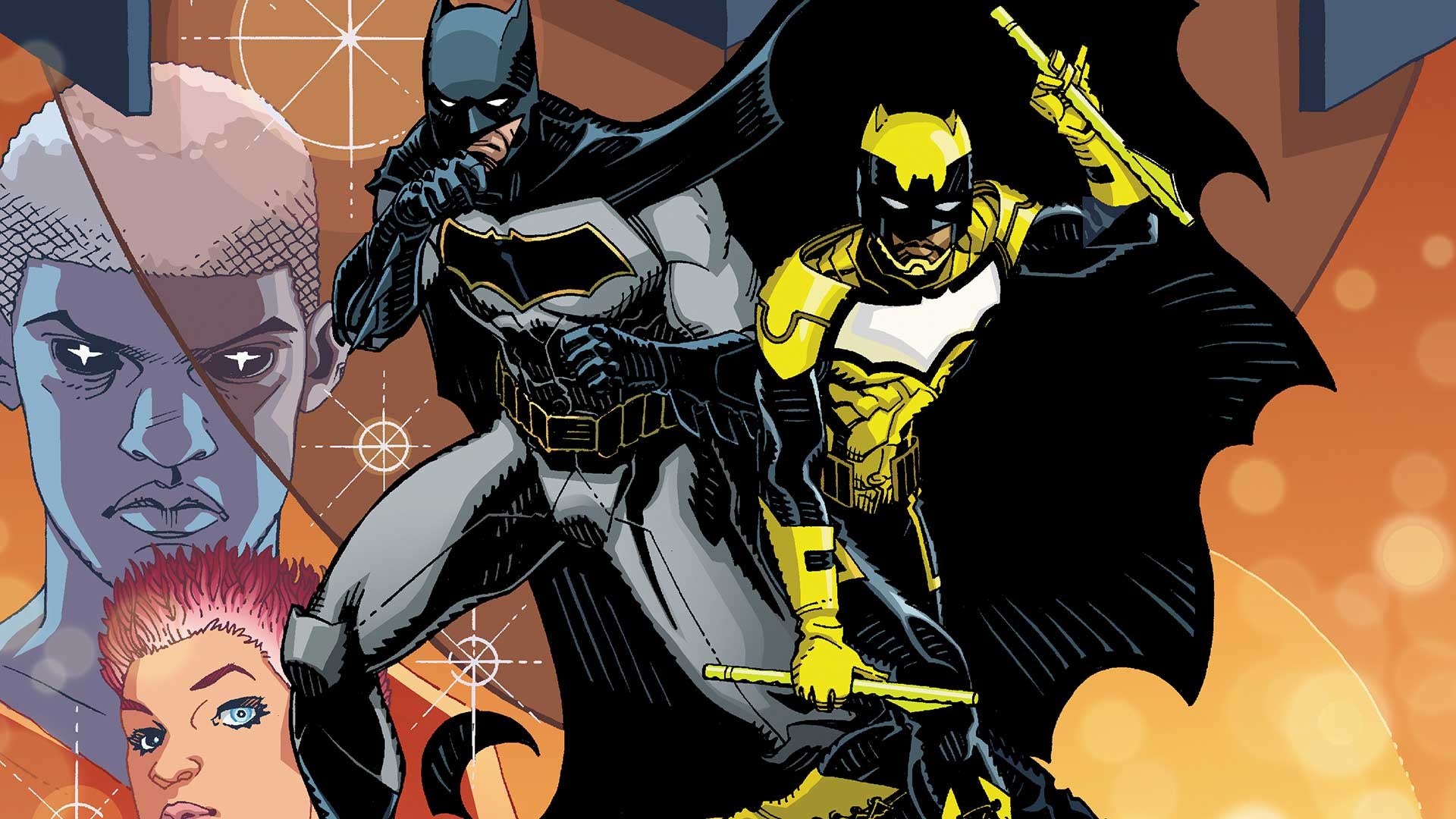 Duke Thomas isn’t new to working alongside Batman as one of Gotham’s many vigilantes, but in his new series Batman and The Signal, the teenager is stepping out of his mentor’s shadow to bring a different kind of justice to the city he loves. It might just change the Bat-family forever.

Between universe-ending threats and Gotham’s usual variety of demented terrorists, Bruce Wayne is a terribly busy man who can’t be everywhere at once. When a wave of young metahumans begin manifesting their powers throughout Gotham – an abnormality for the city – the Dark Knight taps Duke (codenamed the Signal) to become his investigative partner. Duke’s patrols happen during the day when the meta activity seems to be at its peak.

We recently spoke with writers Tony Patrick and Scott Snyder and illustrator Cully Hamner about their new series and just what kinds of dangers are lurking in Gotham by day. The Dark Knight, they explained, may be the hero Gothamites think they want, but the Signal is the hero they need.

When Batman and The Signal opens, where are Bruce and Duke in terms of their partnership and how do they see one another?

Scott Snyder: They’re in a really interesting spot for me. Duke is a character who’s always acted really independently of Bruce and that’s what set him apart as an ally. He didn’t want to be Robin in a conventional sense and he was the first character who sort of considered the possibility that maybe Robin doesn’t need a Batman.

At this point, they have been through so much together between all the things that happened in Batman and in We Are Robin. Where they are at now is that Duke has suddenly developed these powers and Bruce realises that these powers sort of go all the way back through a lineage. Whether or not Bruce knows more than he’s saying is part of the mystery of the first arc.

Duke, for his part, is really looking for his place at this point. He really believes that if he’s able to solve this mystery that’s just popping up now, in issue #1, about the development of all these new young meta characters in the city, maybe he’ll understand why he has powers, who he is, and what his purpose is in Gotham. 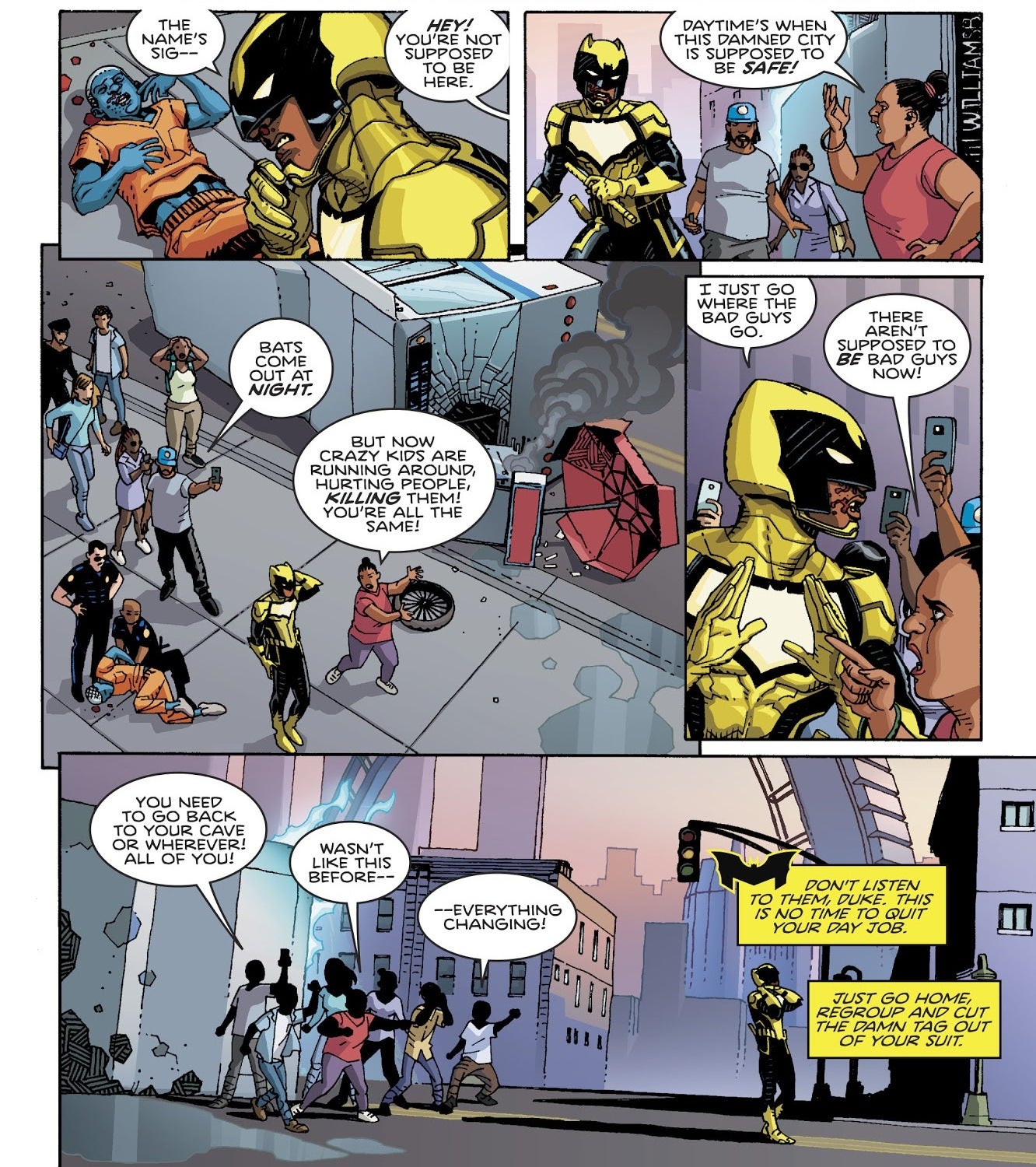 How does Duke relate to the other members of the Bat Family? What’s the relationship that you guys were hoping to explore between him and the rest of the Bat-family going forward?

Tony Patrick: That’s the issue that Duke’s really facing in issue #1. He’s trying to make a determination about what his role is, and will be, in the family, and I feel like the series itself will answer those questions. We definitely wanted to highlight the turmoil and inner conflict Duke’s having with this type of dilemma.

How does Duke see himself in relation to the Bat-family? He has this clever riff on the Batman lore as his code name, but what does this “Signal” identity mean to him?


Snyder: One of the things that Tony and I discussed at length when we were coming up with the name was that we wanted something that wasn’t just another “Bat-” character or a bat-related body part or another vigilante at night. The thing we loved about the name Signal is that a) the “signal” knight is the first knight on the battlefield – which lines up with Duke’s approach to crime fighting – and b) he’s protecting Gotham from a completely different geography. But also, the people he’s protecting and looking out for are not the people that get a lot of visibility in [DC’s Batman] books. For us, the Signal is really this character who really represents a new generation of heroes from new backgrounds who are figuring out their path towards becoming guardians of Gotham.

It’s not often that we see Batman patrolling Gotham in the daytime. So much of our understanding of superhero acts have to do with skulking in the shadows, and obviously that isn’t at all what Duke’s approach to crime-fighting is like. How did you go about conceiving of Gotham by daylight to create the backdrop for the story?

Cully Hamner: There’s no way I redefine Gotham so much as redefine what happens to Gotham and how people live during that time of day. One thing that I really liked about The Dark Knight was that it depicted a civic life and that there’s a daytime life of, you know, people going to work – the politics of the city. There was this complete other side to Gotham and it wasn’t necessarily any less seedy.

Some of the things that happen in the day are much more insidious than the things that you were afraid of in the dark. So that was kind of like a mental starting point for me. But also just in terms of a visual identity, there are still going to be shadows. It’s just the shadows that you see in the daytime are a different angle, they’re longer – there’s more of a contrast.

I’m trying to sort of compose shots where you’re always seeing something in the background, whether it’s the Sun itself or whether it’s an important building, like the Wayne building. I’m playing with things – like when you look at Gotham proper, this structure that’s featured in the Narrows of Gotham, it looks like an arc that’s following the sun’s arc as it moves through the sky before setting when Duke and Bruce meet at dusk. 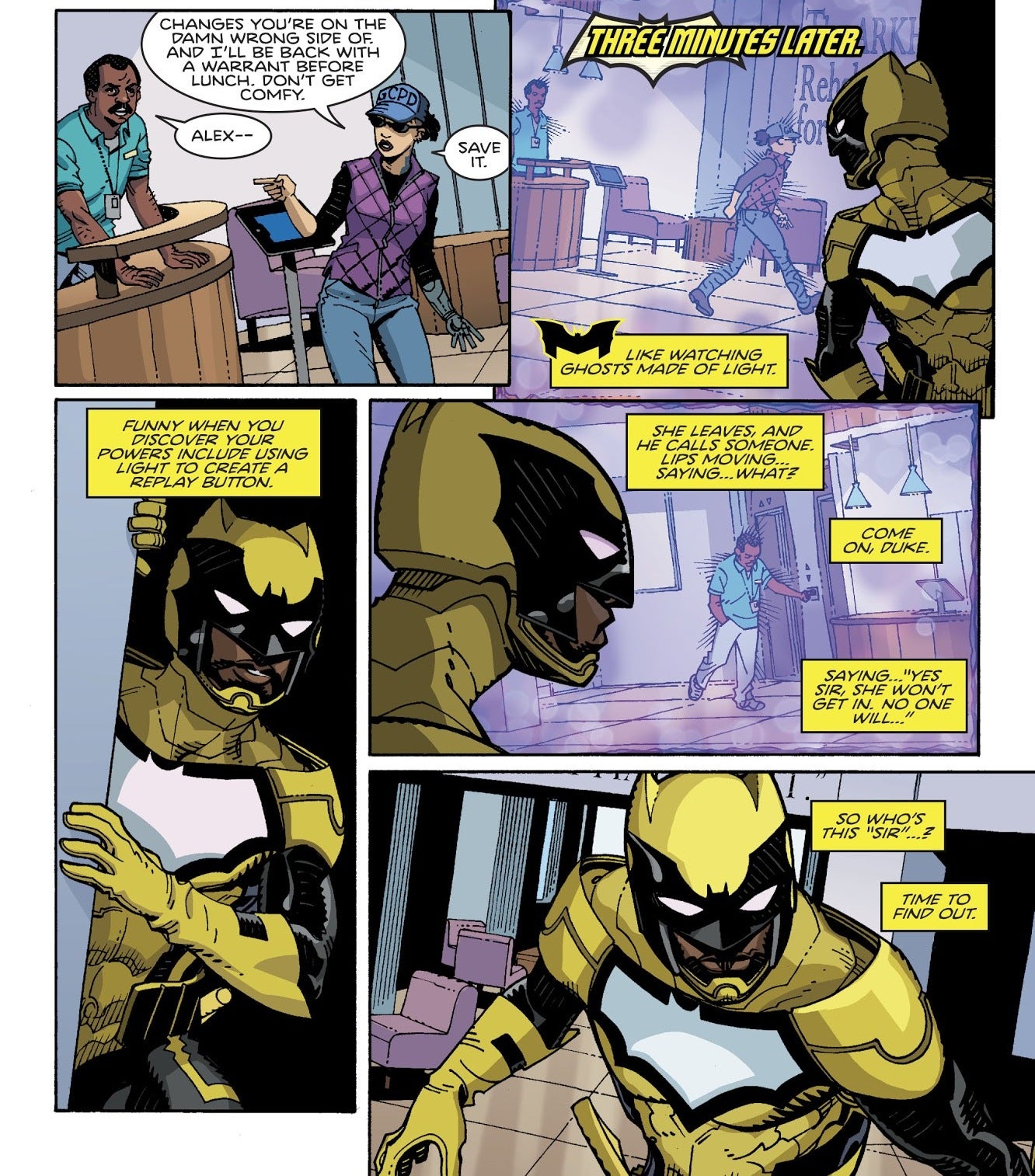 Patrick: Cully and I are really playing around with the daytime ecosystem of Gotham and I want to reiterate that one of the most exciting parts of my day is receiving a Hamner page. I’m always blown away. But we’re always facing the challenge of differentiating between daytime Gotham and nighttime Gotham; like Cully said, we’re really building this lurking suspicion throughout the book that daytime Gotham is even more insidious.

Hamner: I think what you’re getting at is that a daytime Gotham in some ways can hide more than a nighttime Gotham. Even though the night has its darkness and shadows, there are ways that things can hide in plain sight that are just as threatening.

There’s always been that sense that Gotham PD tolerates and appreciates Batman because he’s dealing with things they can’t, especially since super-criminal activity tends to go down at night. Because Duke is operating during the day it feels more like he would have a lot more interactions with the police. What’s his relationship with them like?

Patrick: We’re exploring that in the first three issues and hopefully there’ll be more after this first arc. You’re going to meet a GCPD officer who has an opportunity to tackle a mystery during the day for once, and they’re going to cross paths with Duke. There’s definitely going to be some tension between Duke and the GCPD that defined Batman’s interactions with them in his early years.

The first issue of Batman and The Signal is in stores now.