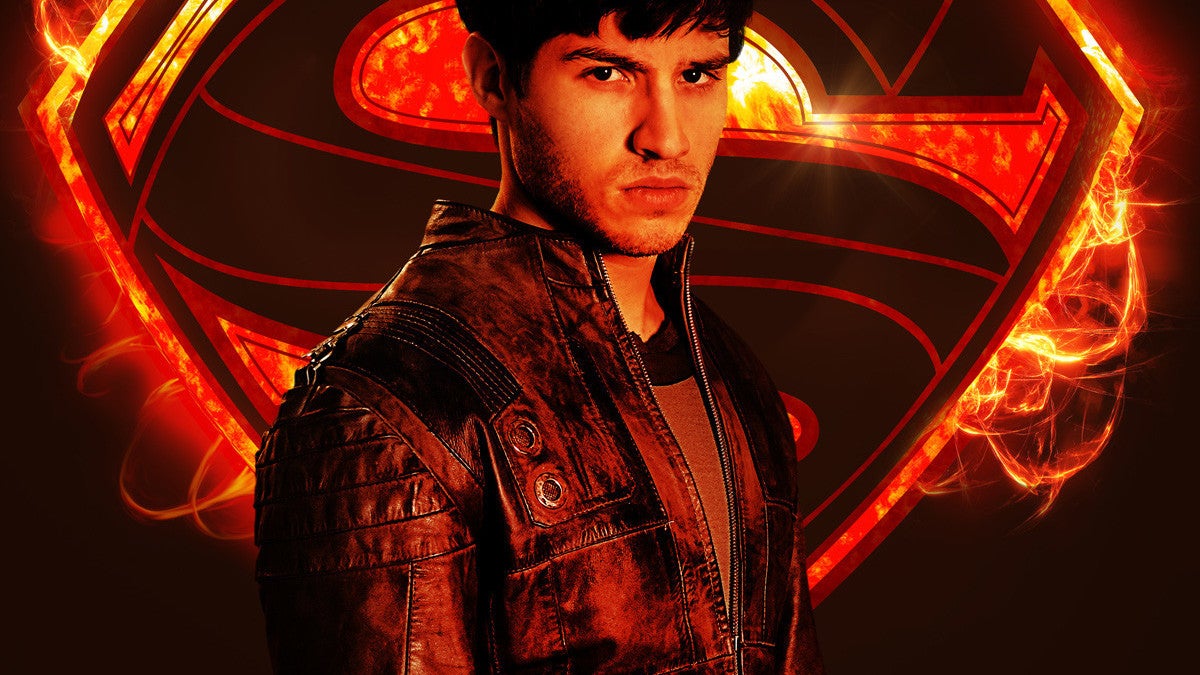 Next week, audiences all over the world will be visiting Superman's home planet, decades before the explosion that destroyed it. Syfy's Krypton TV series will be trying to create new lore and invoke the Man of Steel's publishing history in an all-new way.

Last Saturday at South by Southwest, DC Comics held a panel that gathered comics writers and creators together to celebrate 80 years of Superman. Also on the panel were writers for Krypton, including executive producer and showrunner Cameron Welsh (Constantine). The show is the newest DC Comics TV adaptation, but Welsh and other creators have made clear that Krypton happens within its own bespoke continuity, away from Black Lightning and the shows of CW's Arrowverse. I spoke to Welsh after the panel last week and asked him about what he and the series' staff will be trying to do with Superman's history.

io9: The series shows the planet of Krypton, which is a place most people haven't seen. In the movies and other TV shows, all we ever get is a brief glimpse before it explodes. Here, we're getting to see a living, breathing, operational Krypton. What are the challenges of bringing it to life?

Cameron Welsh: Part of the challenge is for people to accept the idea that it's not a one-off. It's not just a prequel. This isn't just kind of like, treading water until the planet explodes. That's what the time travel element gives us. Once we introduce that, we can lean into the idea that the timeline can change. History changes. So now, the stakes of the show have been packed, for present-day Earth as well as ancient Krypton. Hopefully, that addresses that challenge in terms of making the audience invest in what's happening. 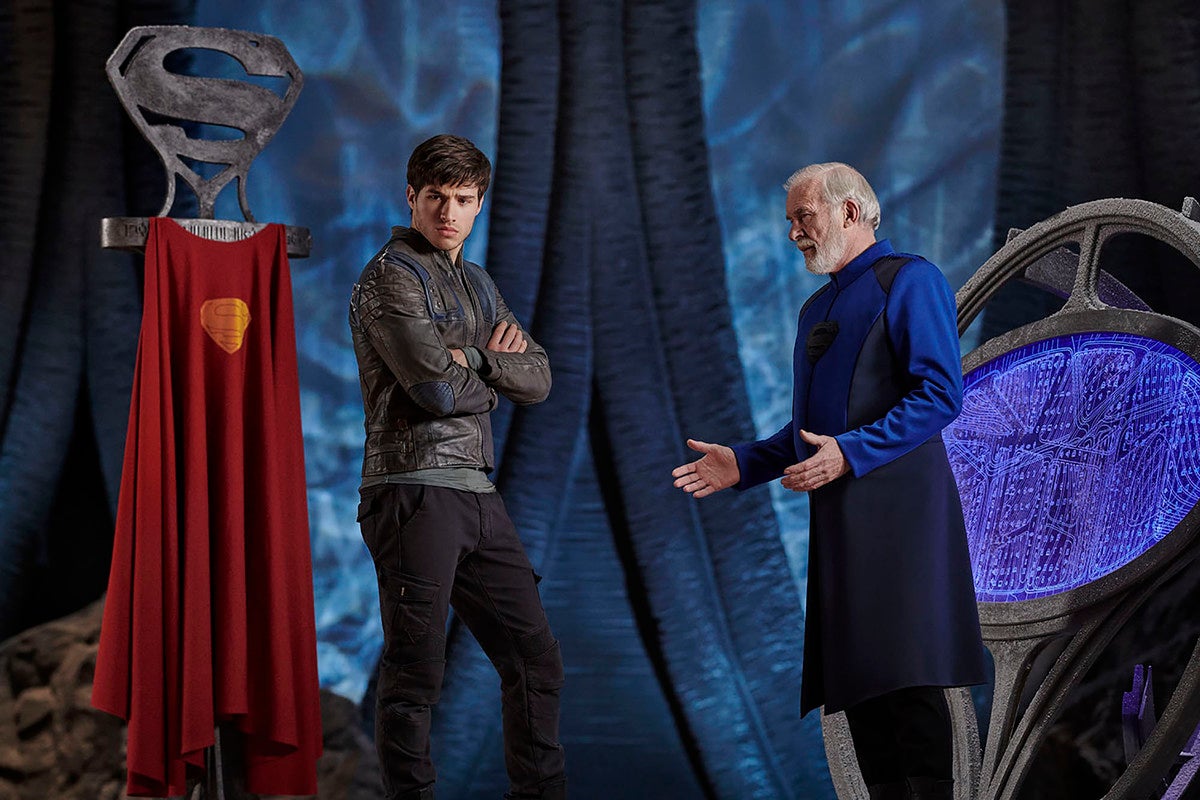 And it is going to affect the canon. People, [as] you know, can be resistant of that kind of thing. They don't want the canon to be ripped up. And we're not looking to do that. We're trying to walk the line between deepening the mythology that exists [and] expanding on it, but also bringing in new ideas.

I think that's what you have to do. Otherwise, I kind of feel, "Why do it?" if you're not going to do something new with it. And then, from a production point of view, the challenges are in creating a new world. But for me, that's exciting. That's just a massive opportunity. Because it is pretty unexplored, we had a licence to kind of go any way we want. We did - in the parameters of our budget - but the world-building of it is a big challenge, but it's the most exciting part about it, as well.

io9: We have seen the idea of castes and factions within Kryptonian society pop up over the decades in the comics. One of the things I really liked was the ecosystem of guilds when Geoff Johns was writing them. So, what kind of stuff are you guys executing in that vein?

Welsh: We definitely play with that. There are six main guilds in Kandor City. So, if you're a member of the guilds, you leave a life of privilege and you live in the upper echelons of society. Like, literally. These giant towers in these canyons at the top of the area are where the guilds live. And if you're not a member of the guild, you're deemed rankless. You have no rank, or place in society. You're basically cast down to the bottom and you live, effectively, in the basement. It's kind of like the slums, in a way. It's a very sharp divide and we explore the role of class in society, and classism, and how that exists.

We also play around with science and religion. The science guild and the religious guild are two of the main guilds, along with lawmakers and artisans and the labour guild. The city of Kandor is a theocracy, so it's a religious figure known as the Voice of Rao who is the head of state. All other religions have been banned. Because it's a theocracy, one of the ideas in the show is that, at this stage, nobody on Krypton is aware of the existence of other alien life. They think that they're alone in the universe. Our heroes, the House of El, challenge the assumption, and that's considered heresy. 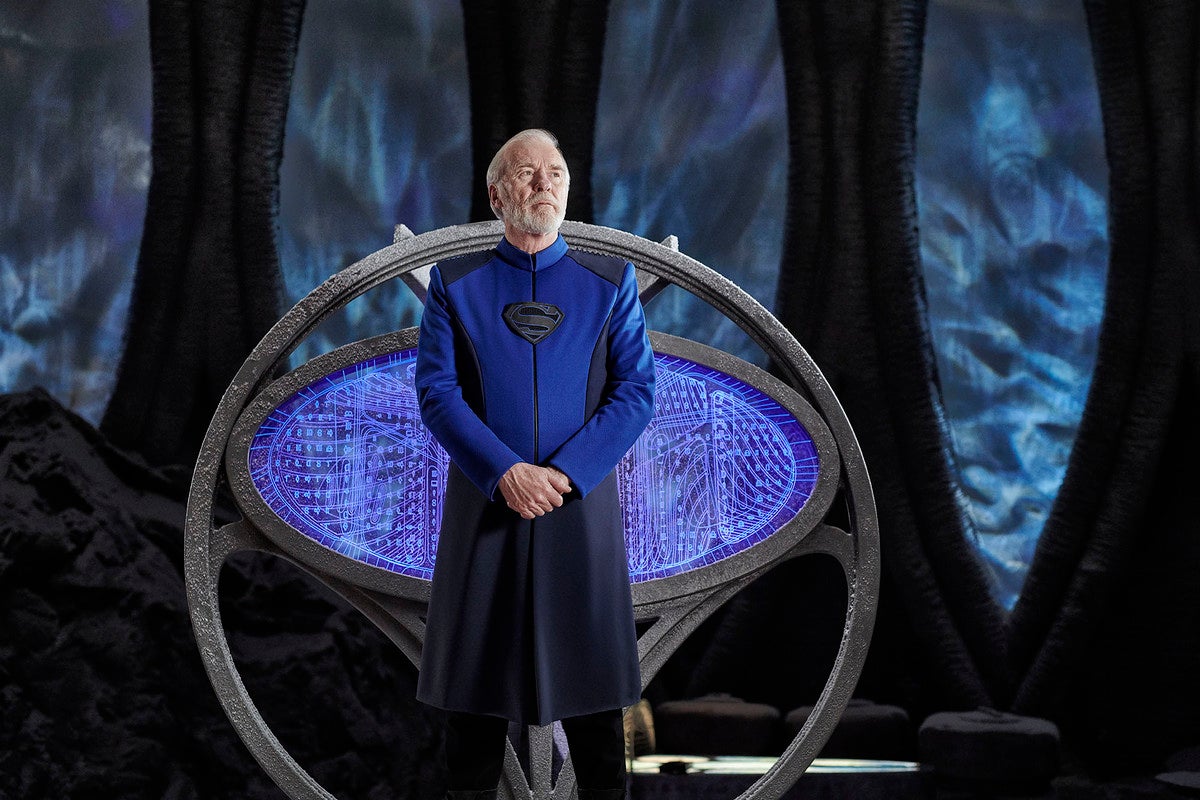 The Voice of Rao says that their god - Rao, the sun god - created all life and Krypton is the totality of his creation. So, to speak of anything outside of that is considered heresy. And our hero's grandfather, Val-El, speaks out against it in our pilot episode, and is executed because of it. At that point, the El family is stripped of their rank and name and they're cast out from being well-respected members of the science guild, [and sent] to the bottom. So they're now rankless.

We get to look at some institutions that are in society today, like patriarchy, and we how those institutions came to be formed, be corrupted, and how they can divide societies and communities. The role of a lot of good science fiction is to hold a mirror up to society. We try to do that - not in an overt way since our goal is to be more entertaining than political - but it's in there.

io9: Might we see other religions on the show, maybe from somewhere else in the DC Universe?

Welsh: Well, we do talk about how there used to be six gods that were in the pantheon and we name all those gods, which comes straight from the comics pages. One of them is Cythonna, the ice goddess. Rao is the sun god so they're kind of like polar opposites. We play around with the thematic duality behind fire and the ice. Her followers are called Cythonnites and the followers of Rao are called Raoists. But that's an outlawed religion, so anyone who practices it has to do it underground.

io9: You said that Kandor is the main setting for the show, which fans know as the Kryptonan city which gets shrunk and held captive by Brainiac. Are you intentionally playing off that? You could go either way: defy expectation, or fulfil it...

Welsh: No doubt. That's exactly what we tried to do. There's so much mythology for Krypton that's changed [for the show] But I think even most casual fans know is that Kandor was a city that was bottled and taken by Brainiac. Setting it in Kandor and having Brainiac as our main big bad for the first season — the idea there was to set up the jeopardy that we play around with. We're putting a spin on the expectation of what that means, and we go against that in some ways.

io9: When Geoff Johns talked about Krypton at San Diego Comic-Con last year, I remember him mentioning something about a Thanagarian Hawkwoman. Is that still in play?

Welsh: It is, but we're looking at that more for season two. You know, we had written that in at a certain point, but we kind of felt like — to be honest — we had a lot on our plate already. We had a lot of characters to service and we really just wanted to do the right thing. We didn't want to spread ourselves too thin. So I thought, "Better to hold it off and do it properly than try to cram it all in."

io9: Adam Strange is one of the most long-lived space-themed characters in the DC Comics pantheon. In the show, he travels back in time and to tell the main character, Seg-El, thathis grandson who grows up to be Superman. Are we going to get a sense that Adam has a heroic career in his present day? 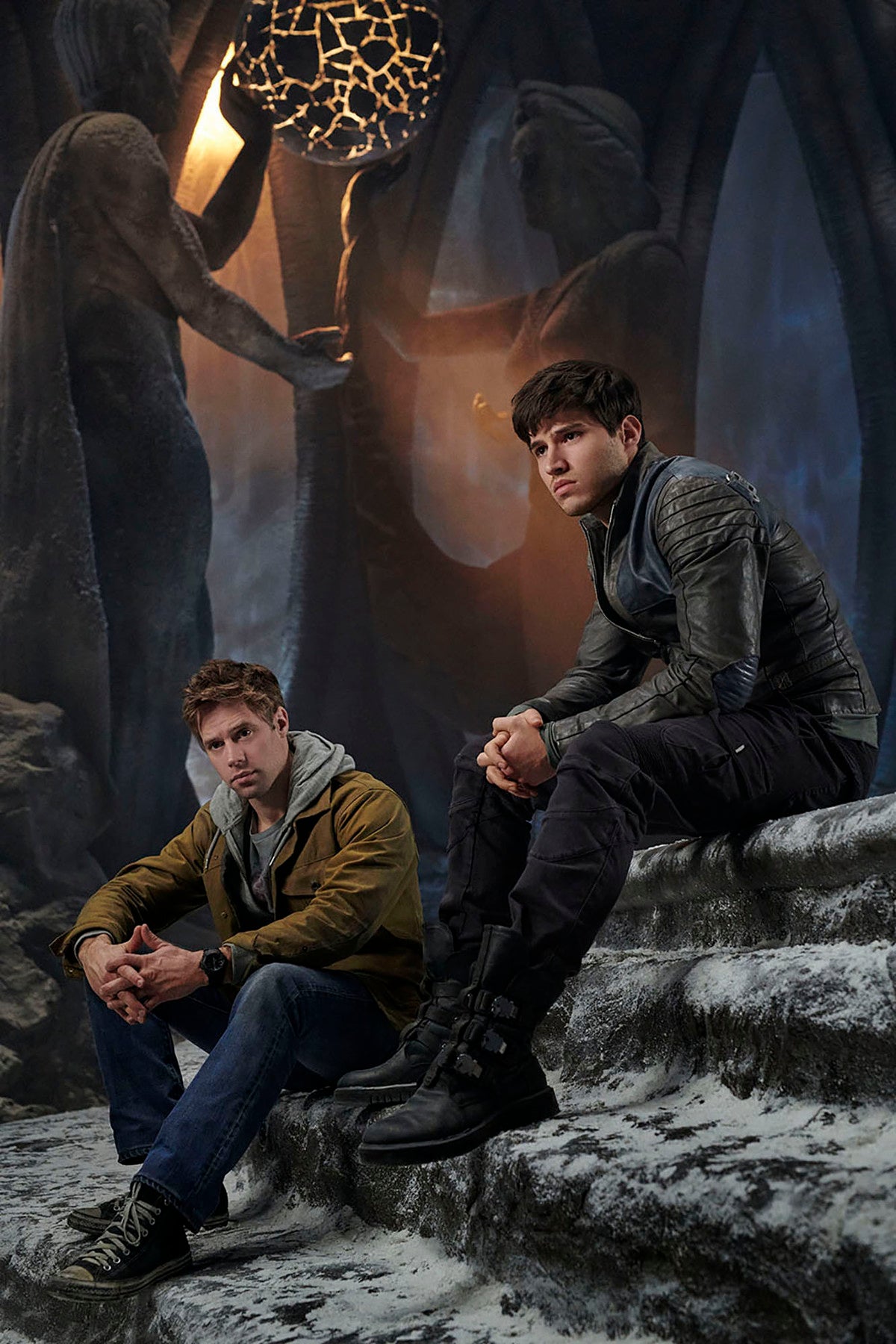 Welsh: Well, this is Adam Strange at the beginning of his journeys. So, he's still got it all ahead of him. And he's still trying to figure out who he is and what he's meant to be doing. He sees himself as the finished package, as a hero, but, he's not really there...

io9: He doesn't have his jetpack yet. 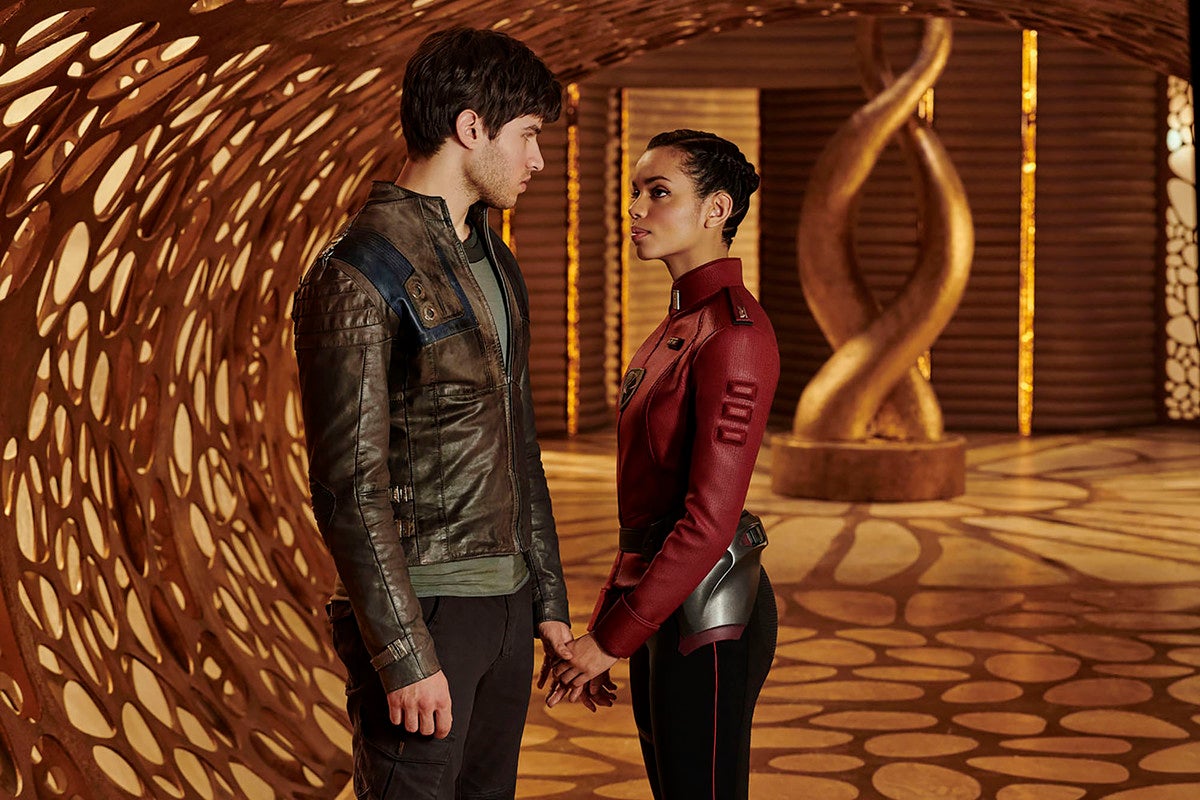 io9: You guys are doing the Romeo and Juliet thing with the Zods and the Els. What are we going to learn about the Zods that we didn't know before?

Welsh: I think we'll understand what drives the Zods. The Zods are just as big a part of the show as the Els, really. We go into flashbacks in episode five and we'll see why they're so honour-bound, why they have pledged themselves to be the protectors of the Krypton, and the price of that. Even within the military guild, they're almost a step above the other warriors, just in their dedication to their task and the sacrifices that come with that. And then, we challenge that. We spend a lot of the first half of the season talking about what it means to be a Zod, and what it costs them to be a Zod, and then we sort of flip that on its head by saying, "What if you had to go against those beliefs?" for any number of reasons. So you know, that's really fun to play with.

io9: I saw the video where you and David Goyer were talking about the show, and it looked like you guys hired people to make Kryptonian food for the characters to eat. What was that like?

Welsh: Oh man, I didn't eat it. But I saw it. It was this big lizard thing and this girl in the scene just had to keep eating it. Like, take after take — every different set-up we had to do. And she's like this tiny little girl. And you just see the cheeks bulging as she's trying to stuff her face. I don't know what they made it out of, but it was in the shape of some kind of a weird lizard-type of creature.

And there's another moment where - I think they're called H'rakas - they're a creature that exist on Krypton... maybe they're the ones Russell Crowe was flying around on? At one point, I think Adam Strange is in the market looking for something, so someone offers him a H'rakan egg sac.. .and he picks it up and it's just this viscous kind of slimy glob of a thing. So, it's fun. All of that stuff is really fun.

io9: Cameron Cuffe plays Seg-El, and he's a huge comic-book fan. What do you get out of having a guy like that be the lead of the show?

Welsh: His knowledge is immense. We've had him in the writer's room and he and I have talked about where we're going. He has lots of great ideas. His instincts for the character are always spot-on. He understands not just his character's place within it all, but how this show fits in the mythology. He really knows, tonally, what's right for the character, what are the kind of values Superman represents, and what he means to the whole mythology. He's just an incredible resource in that way. And we both get to geek out over the same things. He's unlike any lead - he's more like a partner.