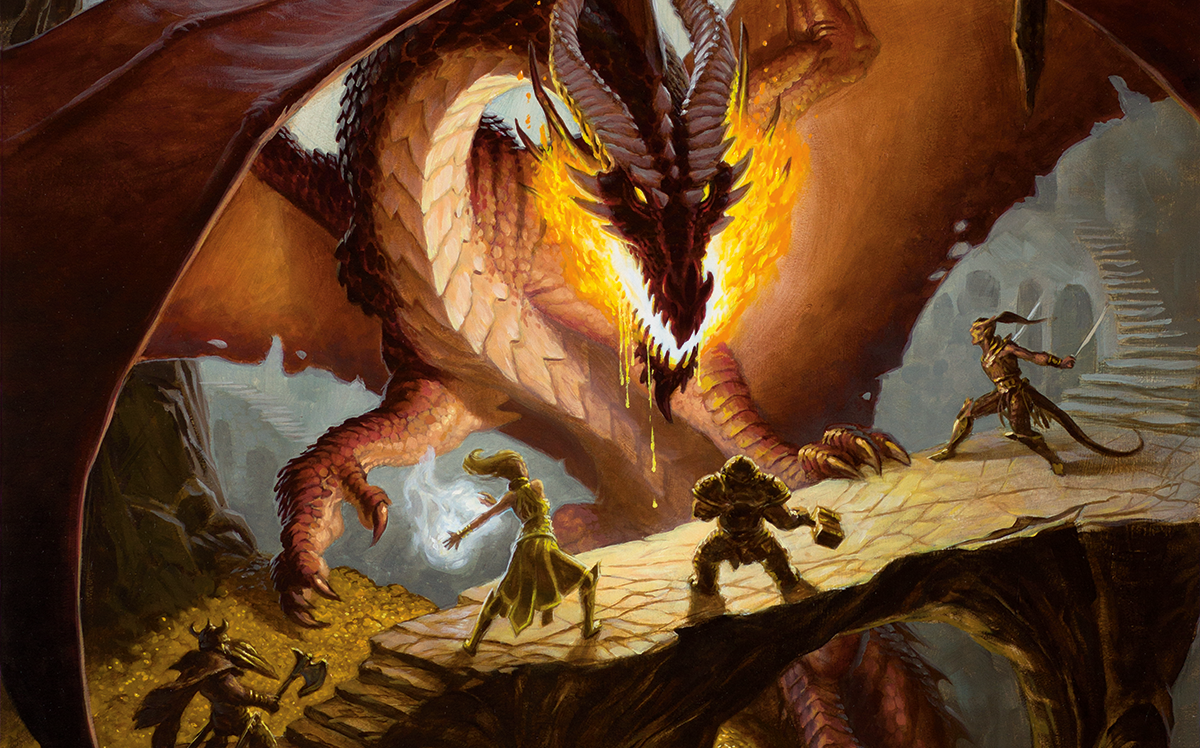 My Dungeons & Dragons group can sometimes give our DM a hard time. That's nothing compared to your D&D stories, though.

Back in Chicago, my main group consisted of three comedians and an actor, all of whom wanted to be the funny guy. I do not know that we ever completed a single combat encounter, because everyone wanted to do a gag, specifically gags that resulted in death and destruction around them.

The DM decided that for their rampant lol-so-random murders of NPCs, he would literally put them on trial and convict them, because the evidence of their wrongdoing was overwhelming. It was basically the last episode of Seinfeld, but in a fantasy setting.

I thought that would be the most frustrating D&D story I'd ever hear. I was wrong.

Cecilia D'anastasio, senior reporter here at Kotaku, is a seasoned DM, and gladly told me her horror stories.

"Everybody has that one college summer where most of the people they know were perma-stoned. For me, those people were my D&D players and I was their DM. Every Saturday, I'd meticulously write and design homebrew one-shots, tweaking them to reflect each player's particular interests and role-playing tendencies for our Sunday games," she wrote.

"So you can imagine how unhappy I was when, week after week, my players kept nodding off right in the middle of the masquerade ball or the in-air pegasus/chariot combat scene or the fight with the chaos beast in the ice dungeon or the part where their party was dosed with acid and getting sacrificed. I was so mad. I'm still mad. Fuck you guys. I worked hard on that."

She also told me this hella gross story about hanging out in her friend's dirty apartment. As they were chilling, she noticed that her friends were all getting up and going to the kitchen, and not coming back. She went to investigate herself.

"I found them all peering over a pot with a greenish, slick slime film over what had probably been starchy water," she said, "It moved. Everybody stared at it in wonder. Then, we designed a D&D game in which we fought a magical, apparently invincible ooze. We lost. Everybody left the apartment. The ooze remained." Thanks Cecilia, that's very gross!

Lifehacker's Nick Douglas shared a story with me about his bachelor party where one of his guests ended up being a less-than-fun person to play with.

"My friend Cole had never played before, so when an NPC hired his character for the adventure, Cole ground the game to a halt for a half hour with an extensive negotiation over his payment. In pretend gold. That he'd never even get to spend in-game. The DM tried to signal that no more gold was forthcoming; I don't really know why he didn't just say 'OK sure, you will get all the gold in the kingdom,'" he said. "I was already laughing at the situation as it was happening, but I still give Cole shit for holding up a one-shot with a labour negotiation."

These stories are pretty bad. When I asked on Twitter for more of them, though, I was not prepared for some of the bizarre, out of control players y'all have had to deal with. Buckle up.

Twitter user SSJSpeedRacer had a, "Jackass that demanded that the physics of my magical fantasy setting made perfect mathematical sense," they said. "He brought the game to a grinding halt to calculate how much force a magic spell would exert and then debated how to convert Newtons to HP."

Dominik Shönleben said,"I had a player who asked me about the stats of everything. Like: 'What does a golden in-laced knife do?' 'It is golden' 'But what does that do?" 'I don't know. What does that do in real life?.' He even requested stats for water bottles and the effects of drinking apple juice."

MorbidGiggling also had to deal with a pedantic player, though in a slightly different flavour of pedantry. "Guest DMed for an online friends regular group and ended up cancelling the session an hour and a half in bc a guy wanted to argue with me about women's undergarments in 'traditional fantasy,'" they said.

"He wouldn't just take 'yes the maid is wearing a bra, David' as an answer."

No other story is as frustrating, hilarious, and just plain mind blowing as the tale of the Fucked Up Hell Building. This story has everything: a disruptive, pedantic player; DMs exploiting their power to the detriment of players; an excruciating and vague homebrew system that no one really understands. It's very long, but worth the read:

In general, players who are obsessed with rules like this are a problem for other players in the party and their DMs. The worst ones are called "rules lawyers." These are the kinds of people who are utterly inflexible to any kind of improvisation or deviation from the rulebook at all, usually so that the strict adherence to the rules can benefit their character and no one else's.

Kyle Krueger played with someone in college that sounded like an absolute nightmare. "Once had a player who came to a session with specific pages of the rulebook photocopied with sections highlighted in order to directly contradict house rules that the group had previously agreed upon, and only busted out those pages when it directly benefited their character," they said.

This came to a head when the players had to divide up the loot. The party had all previously decided not to worry about how much players could carry, but the rules lawyer decided it was time to bust out their photocopied pages.

"We had essentially not discussed 'how much can my character carry' even one time in months of playing, then the game ground to a halt as they furiously argued that the wizard couldn't carry a magical sword or whatever," Kyle said. "That was, I think, the last session we played."

Discolingua had a rules lawyer who went so far as to read the module they were playing to cheat. "Suspicions arose, details of the module got changed, HE GOT MAD when the adventure was different than published. That was the end of his time with that group," she said.

Intendedpun had a player who honestly hurts my brain to think about. "I once had a player arrive to session one late and immediately tell me, 'I understand that you're the DM, but my word is final on anything that happens to my character, I'll just take your opinion into consideration.'" As I said on Twitter: what the fuck…?

Sometimes, DMs and players can find ways to fight back against players who are disruptive or annoying. BooBooHooligan had a player who kept insisting on going to brothels, so they gave that player, "fantasy crabs from a bird person."

Nikolas Kolm, senior mission designer at Ubisoft Quebec, had a player who unironically said during character creation, "Can't I just play a character who's good at everything?"

"[He] proceeded to cheat on most dice rolls for the level ups etc," Kolm wrote. "Ended up being petrified and shattered two sessions in… by the other players."

I've never had a Dungeons & Dragons game get to the point of players killing other players before. Then again, I don't think I've had a game go as badly as the ones in these stories. There but for the grace of god go I.