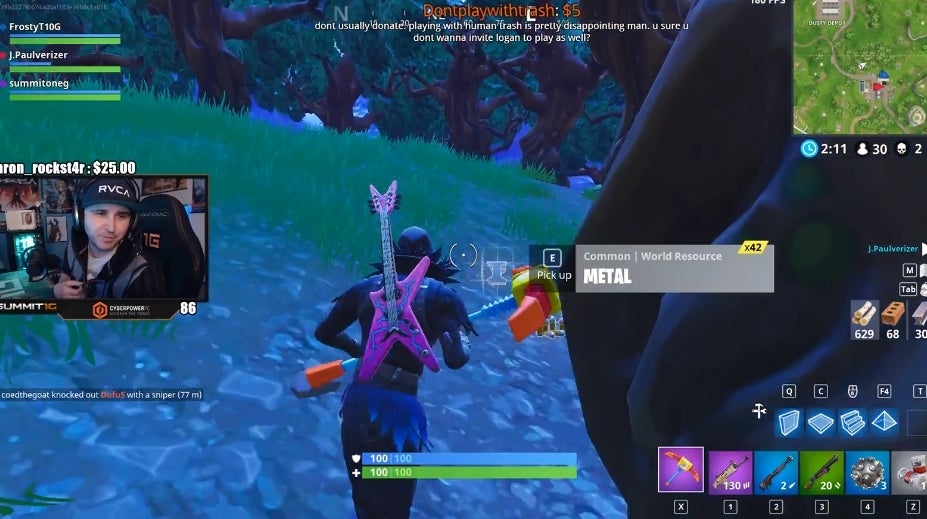 Love him or hate him, there's no denying that streamer Summit1g is one of the most enduringly popular personalities on Twitch. Even his fanbase, however, has its limits. By streaming a few Fortnite matches with YouTube pariah Jake Paul over the weekend, Summit tested them in a big way.

The stream, which took place on Saturday, came as a surprise to Summit's fans, many of whom share the larger Twitch community's disdain for Jake and his brother Logan, of suicide-filming Japan arsehole tour fame.

While the Jake Paul stream itself wasn't super eventful, Summit's chat was more unruly than usual, saying things like "I hate that disneycunt. Hope KSI beats his arse." Their behaviour prompted Summit to call his fans out on stream.

"I'm a little disappointed in the chat, to be honest with you," he said at one point. "I thought the 1g squad was a little bit different. Thought some people had a little bit thicker skin."

After the stream, however, things really blew up. Followers and subscribers threatened to leave because they felt like Summit had turned his back on longtime fans. Referencing Jake Paul, one viewer tweeted at Summit, "U lost me as a fan for this. He's trash."

"Sounds like playing with him was worth it then," replied Summit, setting the tone for the rest of his responses. "Helped take out the trash."

Summit went on to take a sarcastically defensive tack with his audience, saying things like "For all you ppl angry tweeting me. I just want you to know I'm pooping while I reply" and "You know what Twitter? YOU disappoint ME. Sup. I expect apologies raining in quick now."

On Summit's subreddit, there's a thread full of people saying that Summit's response - not the Jake Paul thing itself - is what's convinced them to leave. Eventually, Summit declared a "truce" and asked that fans "don't let my channel die more."

At this point, it's tough to measure exactly how many followers Summit has lost as a direct result of all this. Jake Paul, hate him or hate him a lot, brings big numbers with him wherever he goes. Controversy breeds curiosity, so subsequent Summit streams have had healthy 20,000+ concurrent viewer counts.

Overall, Summit's new follower count has increased over the past couple days, though only at a rate of a few thousand - less than you might expect given Jake Paul's multi-million-strong following. That could mean a fair number of people have also left, but again, raw numbers never tell the full story.

Other Twitch streamers are questioning the long-term effectiveness of Summit's dalliance with YouTube royalty. Maybe he gained some new followers and subscribers for the moment, but will it cost him a chunk of longtimers in the long run? And will these new folks even stick around, or are they just kids chasing YouTube trends and Twitch Prime Fortnite loot?

"If you're going to look at it from a business perspective, playing with them [the Pauls], it ain't good for you," said popular streamer Sodapoppin, dismissing the Pauls' allegedly young-skewing audiences.

"Who gives a fuck how many subs they have? They're fucking kids, are they not?"

In response, streamer Destiny weighed in, saying that Sodapoppin's take was "a dumb comment." "Who cares if subs are kids or not?" he asked. "Money is money."

He added that he doesn't understand why people are angry about Summit streaming with Jake Paul specifically, given that many streamers in major Twitch cliques have also "been involved in some pretty dumb, stupid, immature, kind of malicious shit." Why draw the line here?

Notoriously disgraced Overwatch League player (and now full-time streamer) xQc latched onto the conversation, answering, in effect, that it's about the sort of audience streamers want to cultivate and the effect a torrent of Twitch Prime subscriptions can have on that.

"If you have a horde of kids who come because of Fortnite, your sub mode becomes completely cancer," he said. "Your entire environment and channel becomes garbage."

It goes back to a common refrain on Twitch: that mainstream attention - which has come as a result of characters like Dr Disrespect and, more recently, Ninja, as well as the popularity of Fortnite - is a foreign invader, a community pollutant.

Twitch culture is a very specific thing, mired in memes on top of memes, and some longtime users feel like it's being assailed on all sides. Jake and Logan Paul's fresh new Twitch accounts are, to hear these users tell it, evidence of that. But does that theory hold water? Or is it just panic born of a scene finally being forced to examine itself? Those are questions that, much like the tangible results of Summit's playtime with Jake Paul, will take time to answer.