One of the best things about Marvel’s Star Wars comics is how they bring some of the mysticism and mystery of the Jedi and Sith we’ve seen in other periods of Star Wars history right into the time period of the original trilogy. The latest Star Wars Annual is no exception, pulling Luke Skywalker and Darth Vader into a fascinating bit of Sith history.

Darth Vader holds as an ancient weapon for a more civilised age in Star Wars Annual #4.

It is, as you can see above, a very familiar design, similar to the crossguard lightsaber used by Kylo Ren and previously established in Rebels and other canon material as an ancient design used during the height of the Old Republic. 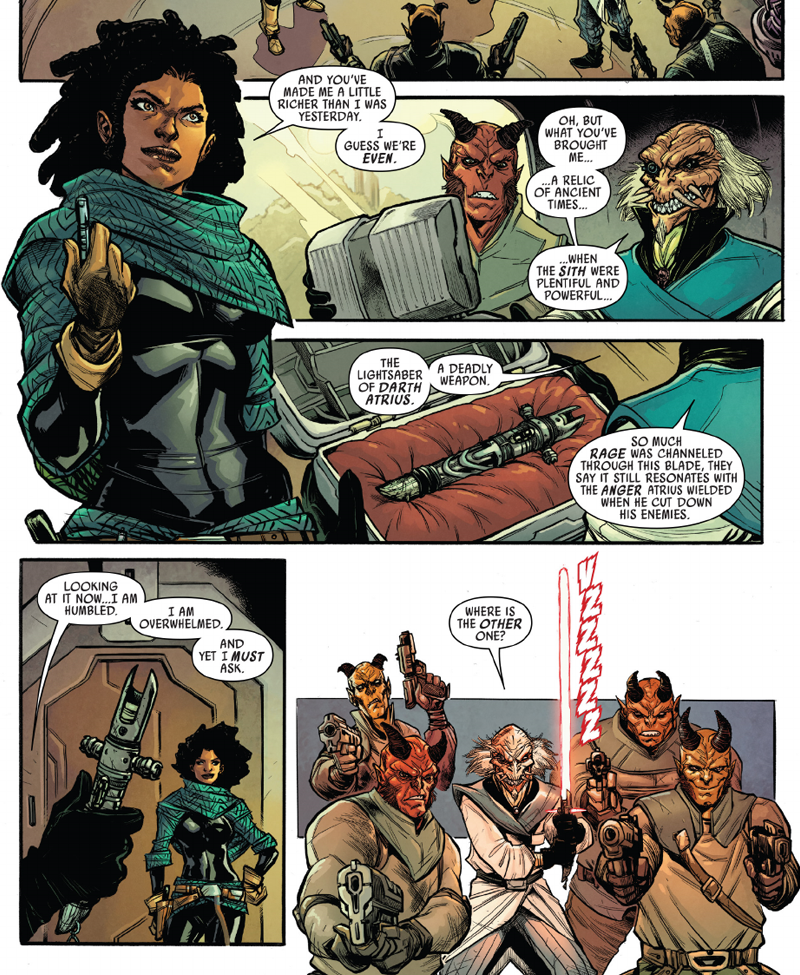 God, the Sith really are just tryhards at this whole “evil” thing, aren’t they?

But it’s not the only thing about Atrius’ lightsaber that’s intriguing. The weapon is infused with raw Dark Side energy so potent that it can overwhelm the wielder and send them into a bloodthirsty rage upon contact. This is precisely what happens when Sana’s deal goes south, angering her buyer; turns out Atrius wielded a pair of lightsabers, and Sana cut a deal with a separate entity for the other one in an attempt to make even more cash.

So, one rage-inducing lightsaber is already a problem. Two is an even bigger problem. And somehow even bigger than that is just who Sana’s other client is: the Empire. Which means now Darth Vader has an evil, cursed lightsaber in his possession, and is furious that the mighty Empire has been swindled by a petty smuggler.

Yes Luke, just pick up the ancient mysterious lightsaber in the middle of a room of corpses, what could go wrong?

It’s from here that things get even more complicated because Luke, who’s also visiting the outer-rim world where Sana is dealing, is looking to raise funds for the Rebel Alliance’s ever-dwindling coffers. So if Vader has encountered one of Atrius’ blades and is on the way for the other, of course Luke has to find a way to get his hands on it, sensing a grave disturbance in the Force he can’t help but investigate.

Although they never cross paths with each other in the process of the story, we get to see the impact the weapons have on both father and son, and it’s not good. 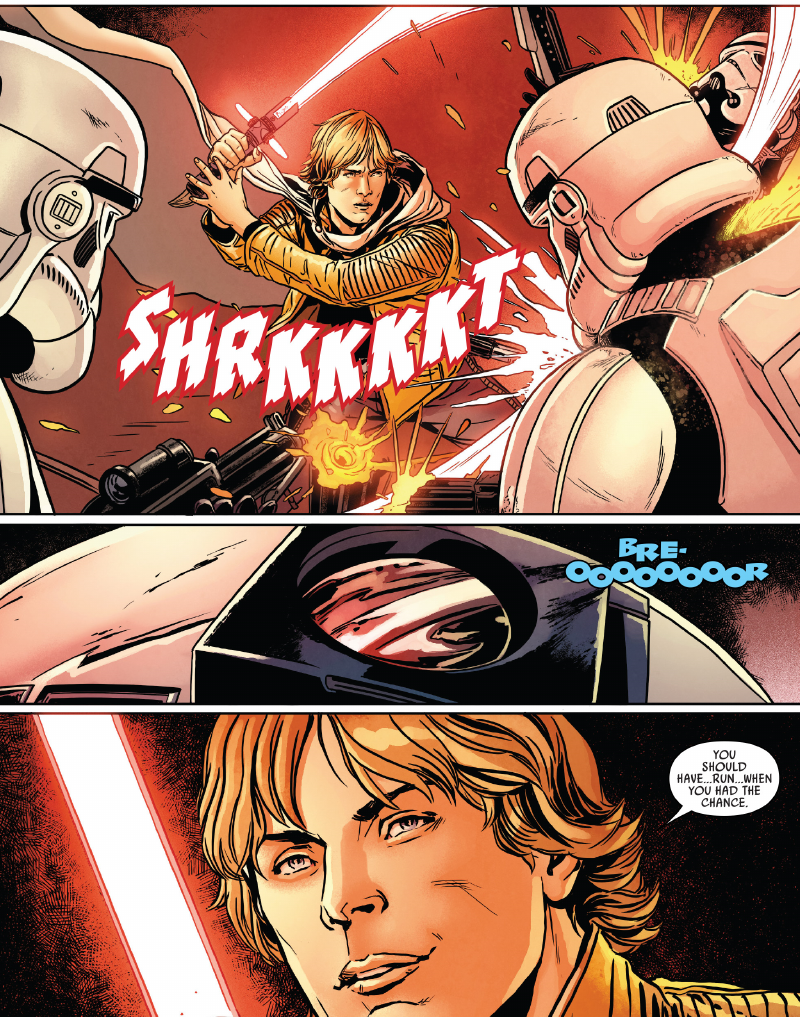 It makes Vader even more fearsome than he already is, while Luke shockingly finds himself revelling in cutting down some Stormtroopers who found him inspecting the lightsaber. But neither of them can handle the raw Dark Side power imbued in the blades, even Vader and after succumbing to its bloodthirst, they separately come to the same conclusion: destroying the weapons and going on with their lives is the best plan, rather than taking the risk of, you know, evil-lightsaber possession.

It’s a weird story for the timeframe of the original trilogy, even if it’s a completely logistically reasonable one, given it’s couched in dealing with ancient artifacts rather than the sudden appearance of some potent Dark Side weapons. But that’s kinda what the whole thing about the mysticism of the Jedi and Sith is in the first place — weird, legendary artefacts, wrapped in history and potent forces that are difficult to understand in a world where the Jedi and Sith are no longer prominent.

It’s a cool way to weave some Old Republic-style Force mysticism into the Star Wars we’re more typically familiar with.

You know it must be bad business if even Darth Vader wants no part of it.

Plus, there’s something fun about a story with a lightsaber design popularised by Beloved Angry Manchild Ben Solo that’s cursed to turn you into a bit of an edgelord arsehole. It’s like poetry, it rhymes.