Donut County, A Game About Being A Bottomless Hole, Is Fun But Somehow Shallow

If you followed the indie game scene back before we hit saturation level omega infinity a couple years ago, you’ve probably heard of Donut County, aka that game where you play as a hole. Developer Ben Esposito has been working on it for more than five years. Now it’s finally out. So how is it? Charming, but far from bottomless.

At the beginning of Donut County, you find the citizens of the titular Donut County in a rock-bottom cavern beneath their hometown, royally pissed at the raccoon, BK, who landed them there. For a decently sized chunk of the game, each level is a flashback about how the hole—controlled by an app on BK’s phone—swallowed up each townsperson’s home. In that sense, you are, like most notable all-devouring holes, the villain of the story. At least, for a time.

The progression of each of the game’s short-but-candy-sweet levels is pretty straightforward. You move the hole around with your cursor, and if you place it beneath something smaller than it, that thing gets slurped up by the endless abyss.

Thing is, your aspiring sinkhole begins as more of a Sparta pit for ants, so you’ve gotta eat up small objects—rocks, grass, colour-shifting chameleons, etc—to slowly but surely grow larger. In practice, this leads to a Katamari-Damacy-like pace. It’s similarly satisfying to go from slumming it with the bugs and dirt to sucking down skyscrapers, too – even if the game’s isometric perspective means the ever-shifting sense of scale isn’t quite as impressive.

The characters you’re pursuing have fun backgrounds, which leads to all sorts of whimsical levels. For example, there’s a forest where you’ve got to puzzle out how to yank a beekeeper from a tree using a frog you can repeatedly launch into the sky.

There’s also a kitchen where you use your hole (phrasing?) to make soup while avoiding roaches who want to eat said soup out of your all-consuming hole (phrasing again?). Oh, and it’s hard not to love the level where you swallow up a bunch of rabbits, at which point a bunch of little hearts emerge from the hole, and then tons more rabbits joyously erupt and lay waste to the house you’re trying to bring down.

The solutions to these mini-puzzles are rarely tough to suss out, but the physics-based interactions underlying them are cute and occasionally make you feel clever. 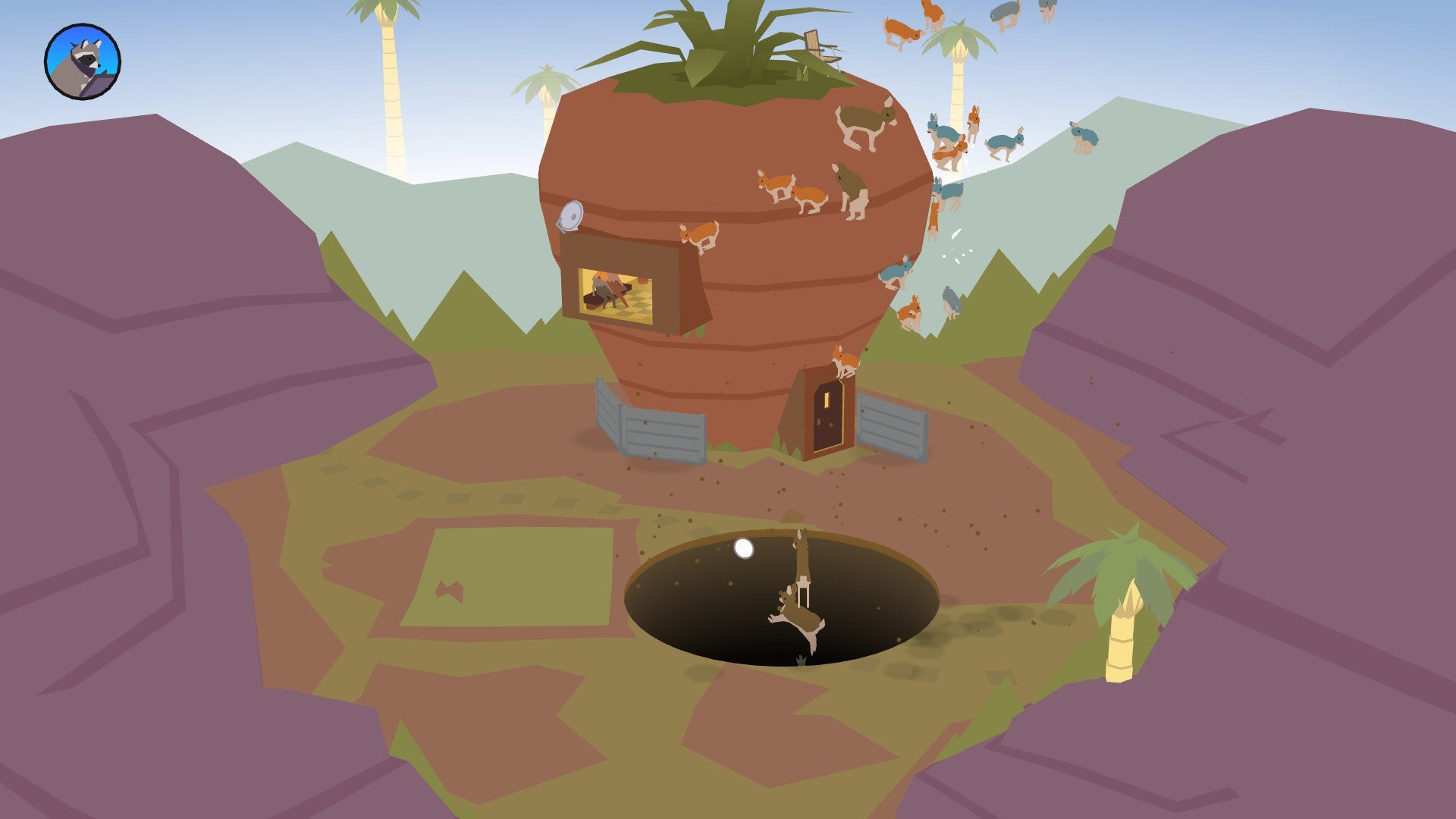 Unfortunately, there’s not a ton of room for improvisation in Donut County’s vibrant levels. There’s more or less a set order to the things you consume, and once you’ve gobbled everything up, levels end. The game is less an intellectual exercise in being an unholy (but also very hole-y) terror and more a relaxing physics toy box.

That’s not a bad thing, but if you’re looking for a challenge, this probably isn’t the game for you.

The story underlying all the town-terrorizing shenanigans is similarly interesting in concept, but light on substance. Slight spoilers: Donut County is about the corrosive effects of gentrification on longtime residents of communities. Each level involves destroying a lived-in place that somebody loves, callously picking it apart piece-by-piece.

BK gets lured into destroying people’s homes by way of an app that awards him points and unlockables for making the hole do its thing, adding a layer of meta-commentary to the proceedings. Not only do you, the player, the gentrifier, not care about these characters’ homes, but it’s all very literally a game to you, one about maximizing returns so you can buy some cool gadgets.

There’s also a level where you can just set everything on fire, which makes it pretty damn hard to feel good about what you’re doing: 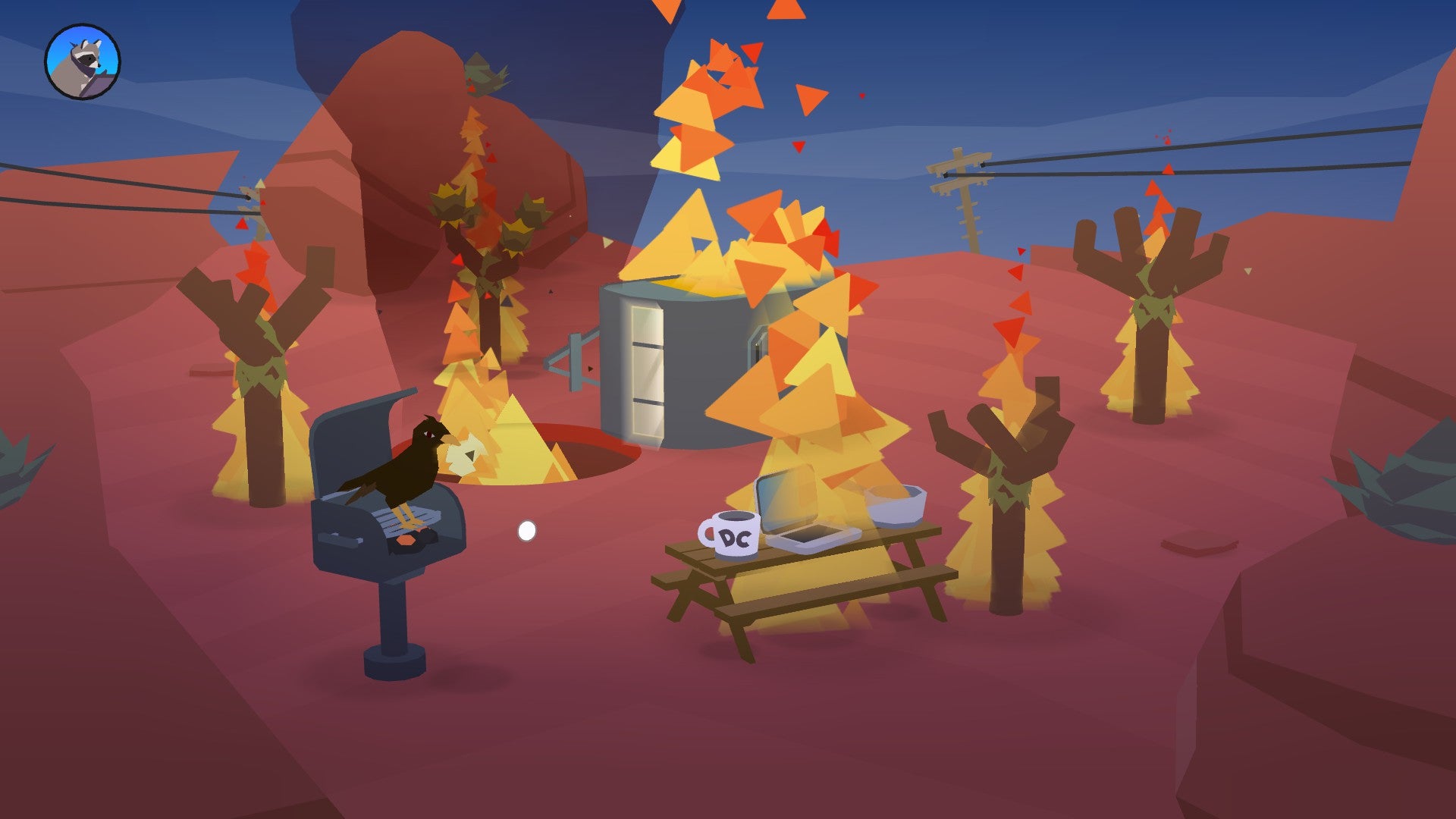 But the game doesn’t really delve into any of these topics so much as it merely touches on them. It does so with plenty of style and confidence, but it keeps things light and breezy, for the most part.

Donut County wraps a novel concept in a presentation that’s endearing as heck, but I can’t help but want more. More elaborate puzzles. More of this world and its characters. More exploration of these themes we rarely hear about in games. More. More. More. Perhaps, then, I was the all-consuming hole all along.