The Spyro Reignited Trilogy Preserves The Excellence Of A PlayStation Masterpiece

Back in 1998, Insomniac Games gave us a small purple dragon who’s a joy to control, colourful free-roaming playgrounds and backed with exquisite music. The Spyro Reignited Trilogy looks different, but it feels just as good.

Released in 1998 for the original PlayStation and followed by a pair of sequels in 1999 and 2000, Spyro the Dragon was the perfect game at the perfect time. In an era when the Nintendo 64 was considered the kids console and the PlayStation skewed toward darker, more adult themes, along came this brilliant purple mythological creature, gliding through the skies of a cartoon fantasy world.

Spyro made his debut at the 1998 E3 in Atlanta, a large plastic statue of him hovering over Sony’s booth. The statue made me happy. The game made me happier still.

The 3D graphics at the time were cutting-edge. The game’s revolutionary panoramic engine, developed by Alex Hastings, allowed for far away geometry to be rendered with fewer polygons, eliminating the obscuring fog that plagued 3D games of the era. Stewart Copeland, former drummer for The Police, composed unique and exotic music for the series, adding to its whimsical character. 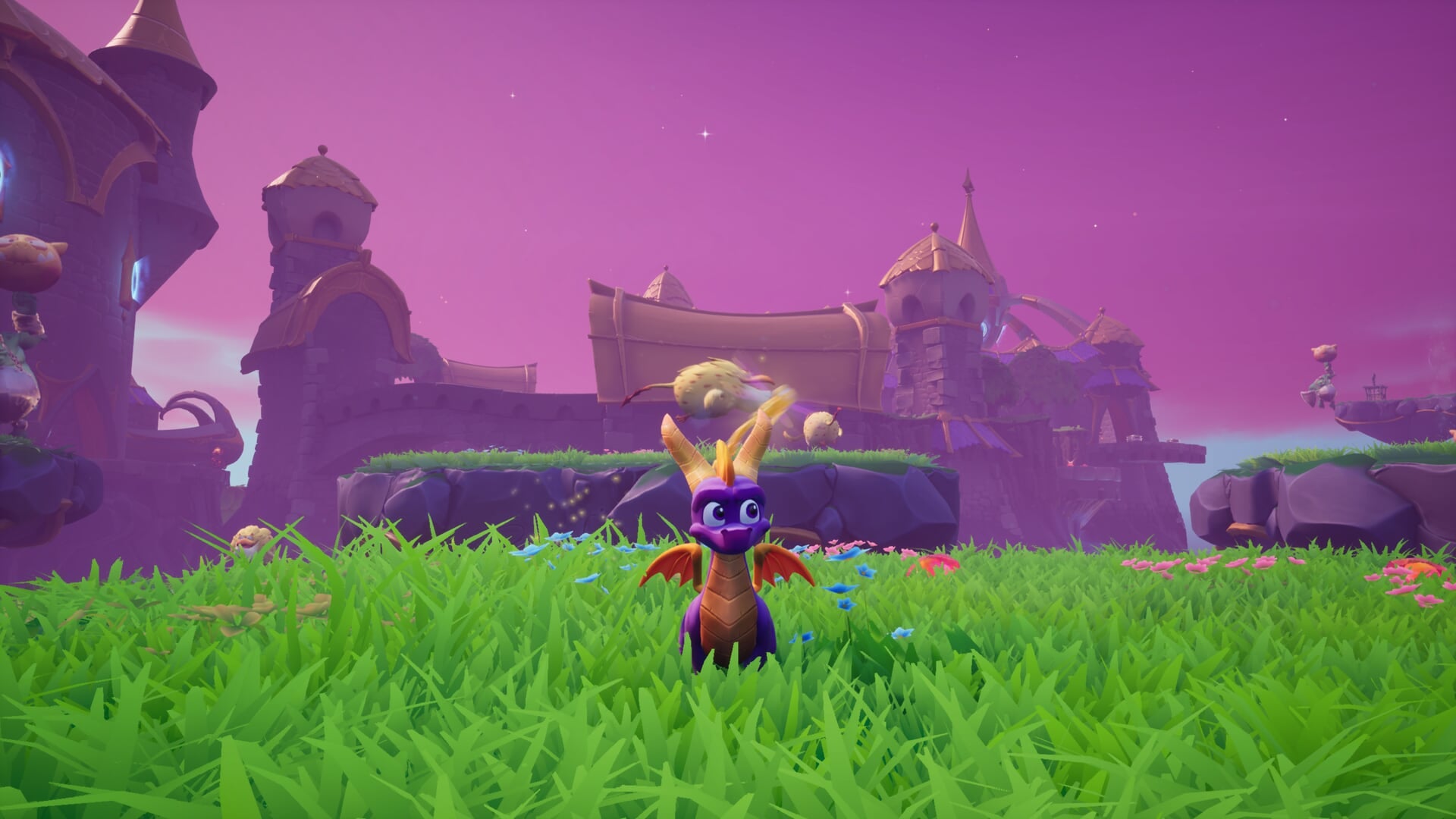 Spyro has always been out standing in his field.

And the movement. The movement was perfect. It’s hard to describe the bliss of a well-crafted 3D movement system. Kotaku’s own Tim Rogers came closest back in 2010 with his treatise on what he calls “sticky friction.”

Spyro trots across fantasy landscapes in carefree fashion. Hold down the charge button and his little dragon face takes on a grim, determined look as he speeds headlong toward his foes. Jump in the air and hold the glide button and Spyro floats gracefully across the void.

There is no guessing. Within minutes of playing, it’s easy to gauge where Spyro can and cannot go, and even the most daring jumps come naturally. It just feels right.

He’s so speedy and easy to control.

The satisfyingly precise movement is key to the Spyro trilogy. While there are enemies to defeat across the three games’ sprawing levels, they’re not so much deadly foes as they are obstacles in the way of exploration. Once Spyro clears the enemies from one of the game’s levels, conveniently accessible from a series of free-roaming hub worlds, those enemies stay gone.

This leaves Spyro free to collect gems, bust open treasure chests and clear whichever optional objectives the three games offer him. The defining moment in a Spyro game is seeing the glint of a seemingly unreachable gem in the distance and finding a way to get there, be it discovering a secret path or gliding to it from on high. 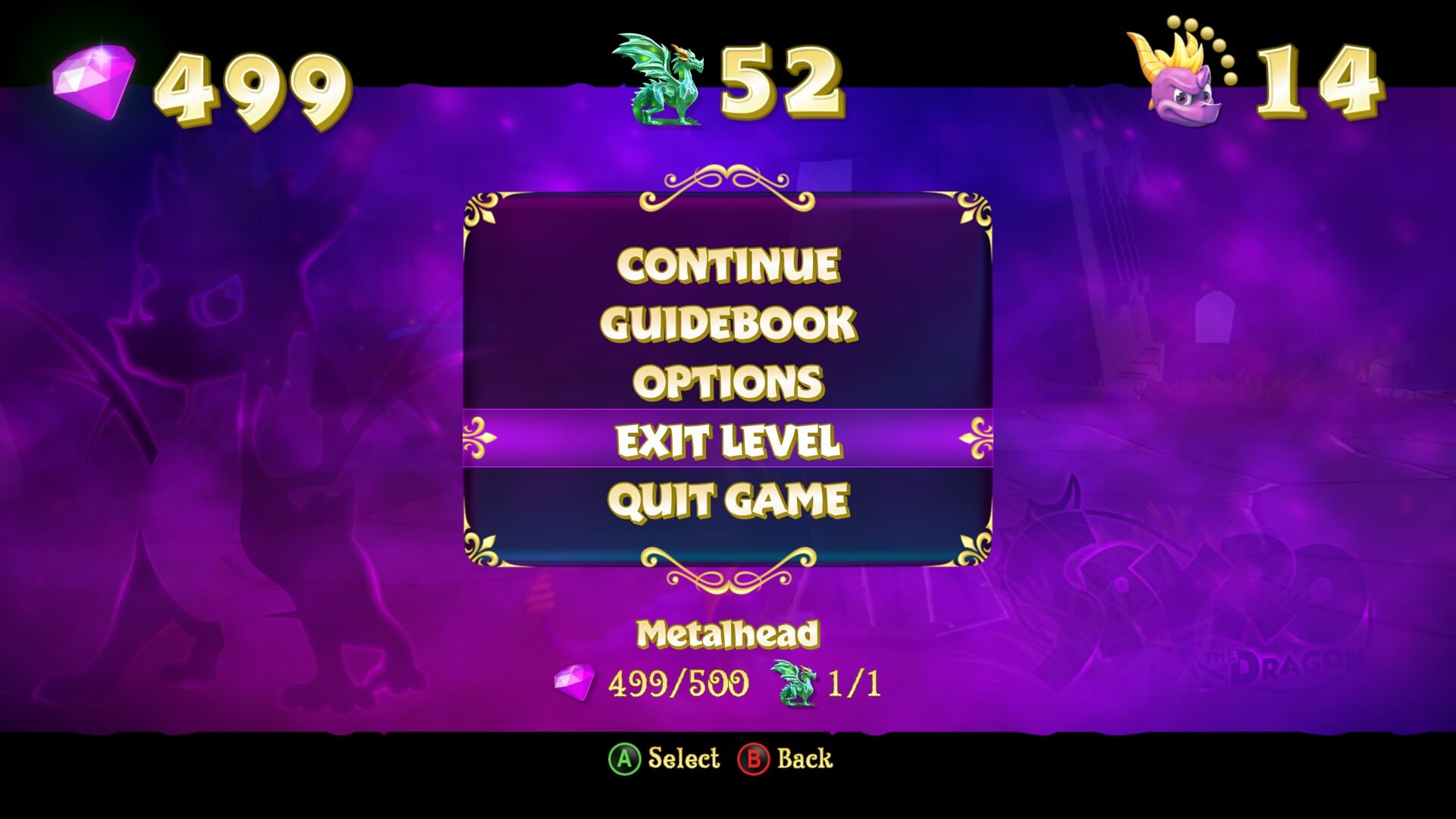 Nothing like getting to the end of the level and discovering you’re missing one gem.

There’s a strong emphasis on collecting presents across all three games. In the first, Spyro travels from hub world to hub world freeing dragons imprisoned in crystal by Gnasty Gnorc. In Ripto’s Rage each level contains a talisman and a number of challenge orbs for the little dragon to find or win via mini-games.

Finally, in Year of the Dragon, Spyro and friends must rescue dragon eggs stolen by an evil sorceress. It’s a game for players who won’t exit a level until they’ve found 500 out of 500 gems, four out of four dragons and recovered two of to stolen eggs.

Why did the big dragons never help once freed? Jerks.

The Spyro Reignited Trilogy mostly leaves Spyro the Dragon, Spyro 2: Ripto’s Rage and Spyro: Year of the Dragon originally intact. Movement is still thrilling and addictive. The music, remastered by composers at the Activision studio Toys for Bob, evokes the same wonder as Copeland’s original tracks (though the option to switch to the original music is present). Level layouts are the same. Enemy placement is the same.

Complex tricks I had to perform in order to reach hidden areas in the original game are just as frustrating this time around (talking to you, Tree Tops).

The most significant change is the way the game looks. It’s gone from this: 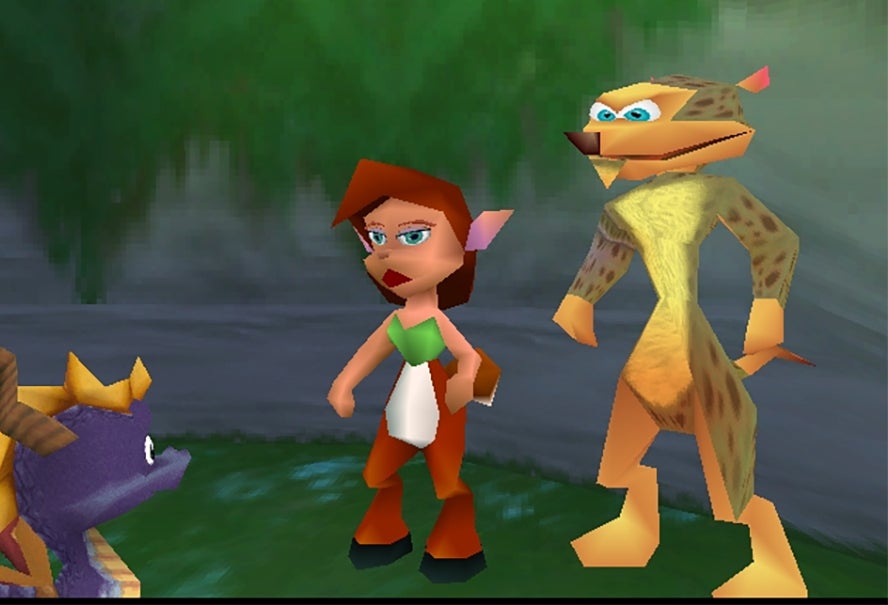 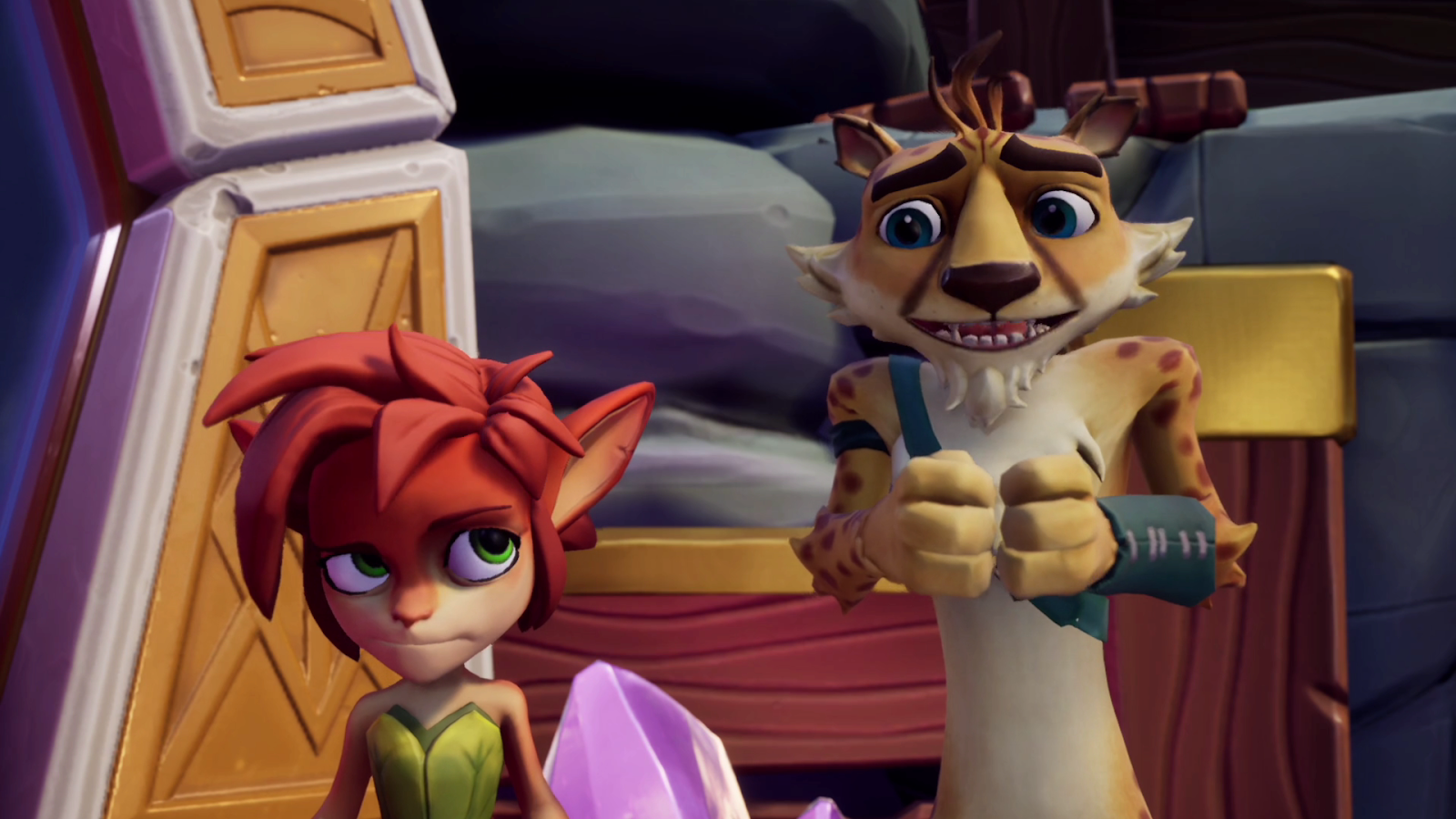 Toys for Bob is no stranger to Spyro the Dragon. It’s the studio that created the Skylanders series, the first instalment of which was created as a Spyro vehicle (Skylanders: Spyro’s Adventure). The popular toys-to-life series was born of Spyro, borrowing many of its signature elements and themes from the platformer series Insomniac built.

The anthropomorphic animals that populate the Skylands are no doubt relatives of Alora the faun and Hunter the cheetah, two characters introduced in Spyro 2: Ripto’s Rage. They could also be tied to Sheila, the playable kangaroo introduced in the third game, Year of the Dragon. 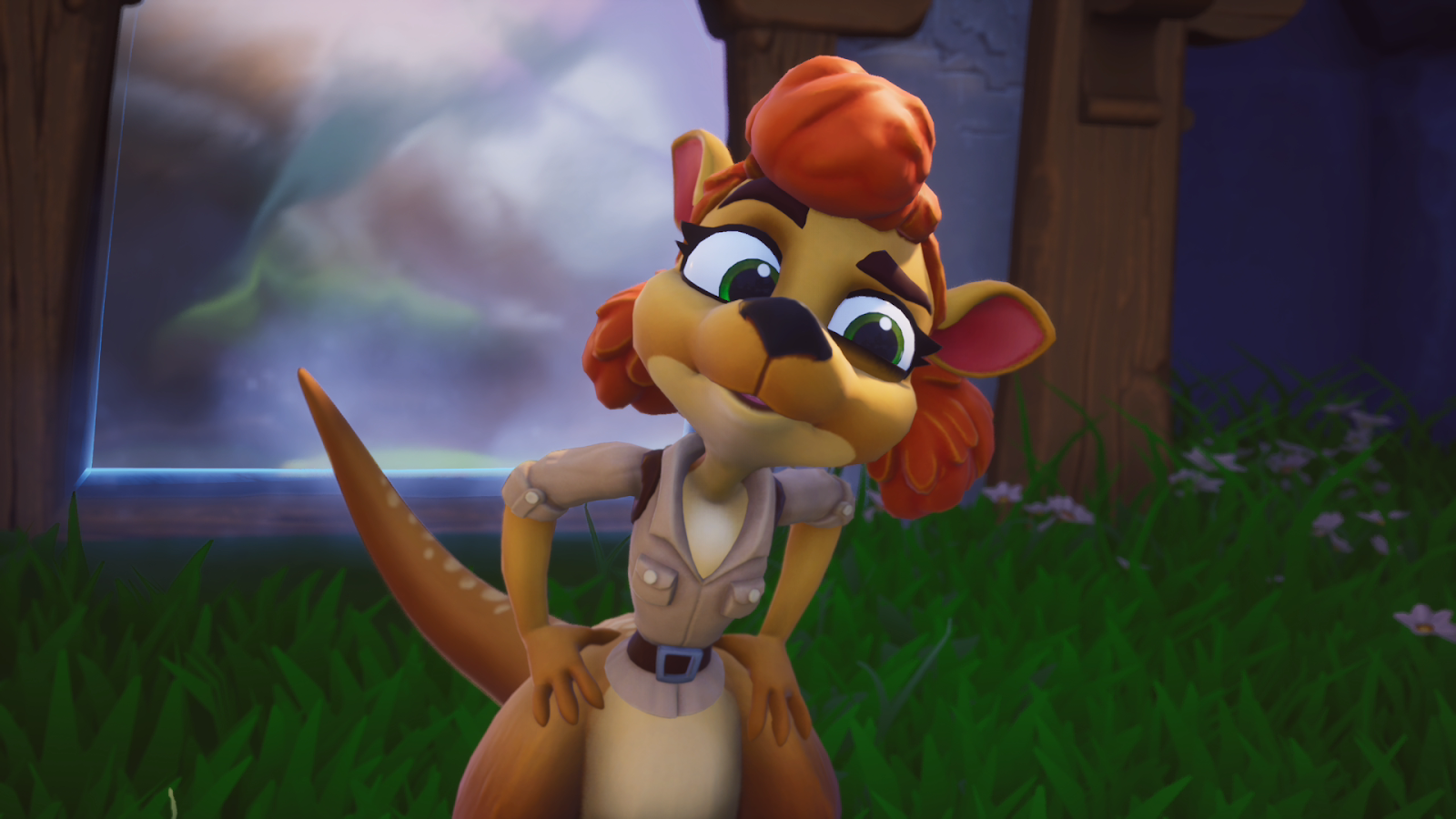 Characters across all three games have been given serious makeovers by the Toys for Bob team. Some long-time fans and fan art creators might not be happy with the new looks some of the characters are sporting (like Sheila’s human arms), but I enjoy the change.

The transformation even extends to the game’s enemies, which are more menacing or whimsical, depending on Toys for Bob’s interpretation.

The first three Spyro games hold up incredibly well, and the lush graphical overhaul makes them even better. Combined into one budget-priced package ($US39.99 ($55)), it’s an incredible amount of game for a relatively small price. 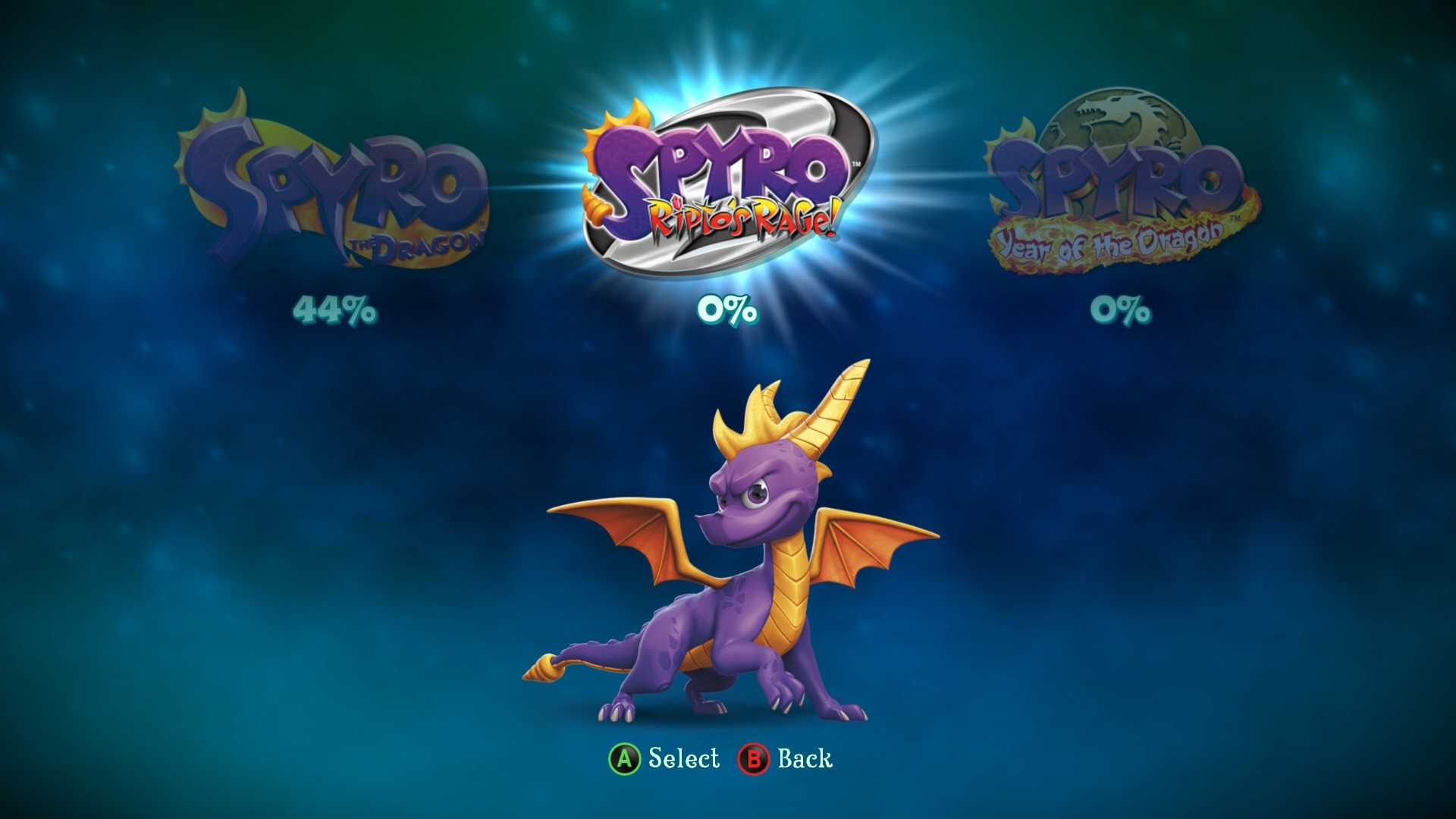 Just make sure you play the games in the proper order. Start off with Spyro the Dragon. There you’ll learn to appreciate what the tiny hero can get done with gliding, charging and breathing fire.

The next game, Ripto’s Rage, adds swimming and climbing, giving Spyro more places to explore, plus some creative mini-games and level-based challenges. And then there’s Year of the Dragon, which introduces four additional playable characters and even more side activities, including skateboarding. It’s cheesy, but it works.

I received my copy of the Spyro Reignited Trilogy on Friday. I beat the first game on Sunday afternoon. I’m 40 per cent done with the second, and played through 20 per cent of the third in the course of “just hopping in to check it out real quick.”

What can I say? I love this series, and I’ve been dreaming of a remaster for years. Toys for Bob made that dream come true.

The Spyro Reignited Trilogy is now available on Xbox One and PlayStation 4.