According to Tumblr, its new adult content ban doesn’t effect images of “female-presenting nipples” that involve medical situations, are related to political speech, or appear in artwork.

On Monday, Tumblr’s staff account published a message aimed at “clarify[ing]” the new policy, which takes effect today. Embedded in the post was a gif providing several examples of nudity that is “still permitted within our policy.”

Permitted when posted by Tumblr’s official account, maybe, but still flagged when uploaded by regular users. 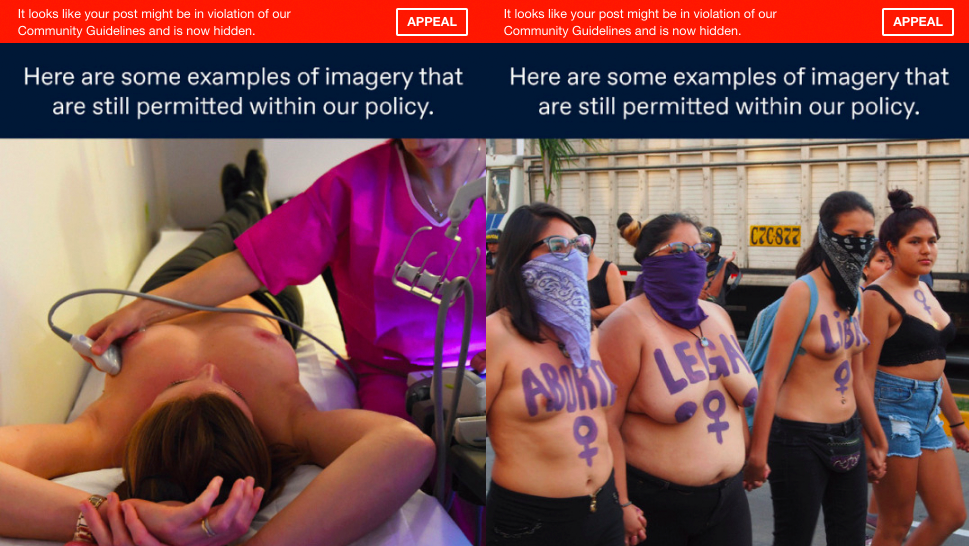 When Gizmodo posted the gif to Tumblr ourselves, it was immediately flagged as a potential violation and hidden by the platform’s filter. When the images shown in the gif were uploaded individually, two of the four examples — which appeared to show a breast ultrasound and a pro-choice protest, respectively — were similarly flagged and hidden.

In the week since the Community Guidelines update was first announced, numerous users have spoken out against it, questioning both its gendered scope and the aggressive, often inexplicable actions of its filter.

In recent days, the platform has allegedly flagged a picture of a finger, historical bus photos, and Great British Bake-Off gifs. Tumblr can now add its own content to that list.

We have reached out to Tumblr for comment and will update this story if and when they respond.