How To Use Nvidia G-Sync On A FreeSync Monitor

Last week, Nvidia announced plans to roll out a software-only version of G-Sync, its Adaptive Sync tool for PC displays. And now, with GeForce driver 417.71 out in the open, the small group of people who mix Nvidia graphics cards with FreeSync monitors can try out this new implementation of G-Sync.

Nvidia says it’s in the process of testing Adaptive Sync-compatible monitors to see which ones work well with G-Sync. After testing 400 displays—probably more by now—the company released a short list of 12 “G-Sync Compatible” monitors. If you have one of these, then you’ll automatically enjoy a “GeForce-compatible Variable Refresh Rate experience,” as Nvidia puts it, if you’re gaming with the latest GeForce drivers installed.

Technically, Nvidia’s new implementation of G-Sync means that you should be able to use the technology with any monitor that supports FreeSync. You’ll have to do a little more configuration before you start gaming, however:

How to get G-Sync working on a FreeSync display

First, you’ll need to have a Nvidia GTX 10-series graphics card or higher in your PC, and you’ll need to connect your monitor to your graphics card using a DisplayPort cable, rather than HDMI. Also, make sure to press the menu button on your display, navigate through its on-screen menus, and confirm that “FreeSync” or “Adaptive Sync” is turned on.

Next, go to the Nvidia Control app on your PC. Open up the “display” settings and click “Set up G-Sync.” From there, check the box next to “enable G-Sync, G-Sync Compatible.” You should probably stick with the default option to “Enable for full screen mode,” as you might encounter issues running G-Sync in a windowed game—if it even works at all. 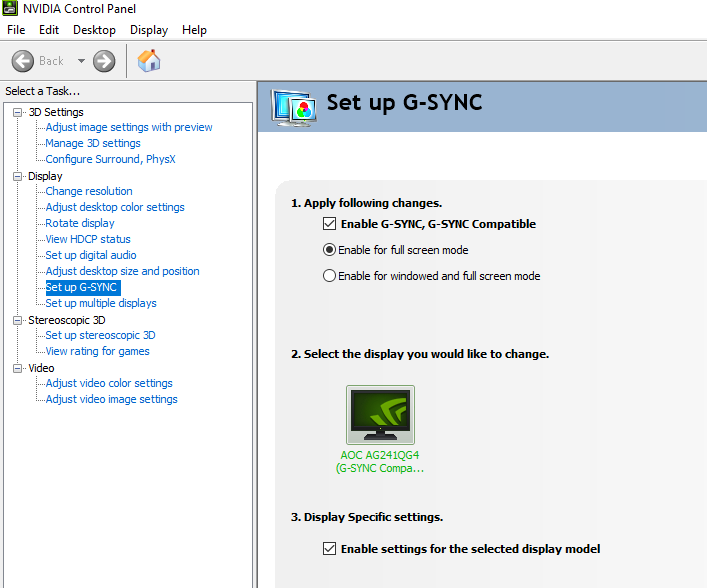 Nvidia)” loading=”lazy” > This is where you turn the G-Sync on! (Screenshot: Nvidia)

If you have multiple monitors, make sure you’re changing the features of the correct display in the Nvidia Control Panel. Monitors that support Adaptive Sync technology will appear with a green screen (and part of the Nvidia logo) in the “Set up G-Sync” screen.

If you’re having issues getting G-Sync to work with your non-G-Sync display, don’t panic. You might need to tweak a few Nvidia Control Panel settings first. Try going going to “3D Settings” in the left-hand panel, then click “Global.” Scroll down to the “monitor technology” drop-down menu and set it to “G-Sync Compatible.”

If that doesn’t work, go to “Change Resolution” in the “Display” section and try lowering your display’s refresh rate. You should always try to set up G-Sync at your monitor’s maximum refresh rate at first, but PCGamesN found that G-Sync may not always support your monitor’s full range of refresh rates. If you’re still having issues, consult Reddit Nvidia community’s crowdsourced testing spreadsheet—they have plenty of notes about the settings you might need to change for various displays, and you can cross-reference to see if others have even gotten G-Sync to work at all on your specific FreeSync monitor.

To be clear, there is a non-zero chance that you will set this up and find that G-sync doesn’t work correctly. If you’d like a neutral test to try before playing any games, download Nvidia’s pendulum demo for measuring graphics performance and see how it looks. (Users have reported that some unapproved monitors flicker more with G-Sync, for example.)

PCWorld, which tested the tech at Nvidia’s booth at CES, also has a video that can help you understand what you’ll see when a unapproved monitor does not work: