The New Apex Legends Skin Prices Are Too Damn High 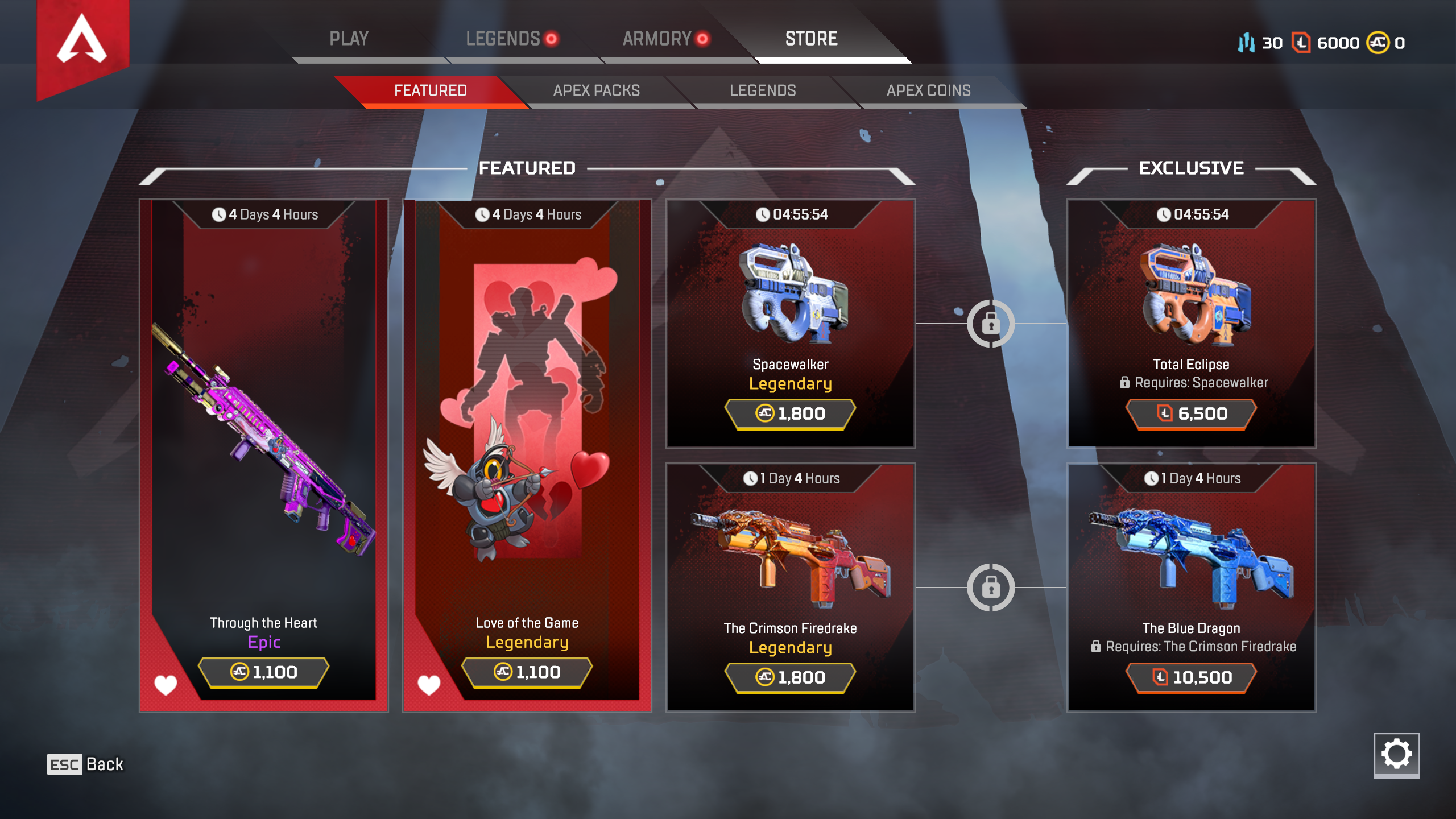 Apex Legends got its first update on February 14, and with it came Valentine’s Day-themed cosmetics. Although players have been posting online about how they are grateful for the treat, some have expressed worry about the relatively high prices of these cosmetics, and what that might say about the game’s future.


Apex Legends is a free-to-play game, although it does make money off of selling a premium currency called Apex Coin, which players can use to buy cosmetic skins for their characters, weapons, or player banners that are displayed at the beginning of a match.

The game’s update for Valentine’s Day introduced two new romantic cosmetics — a skin for the Longbow sniper rifle and a banner for Pathfinder. So far, so good. Except that each item was priced at 1100 coins, which comes to about $13.20.

While players say they are happy to pay for cosmetic items, $13.20 for a banner and a weapon skin seems a little pricey to them. While some players are saying they’d go to town on cosmetics that were $4 to $7, spending over $12 on a weapon skin feels predatory to them, especially given that unlocking the characters Caustic and Mirage only costs 750 coins.

To add insult to injury, the cheapest pack of coins you can buy will give you 1000 coins for $12, meaning you have to buy the next-highest pack in order to unlock the skins you want, which is 2150 for $24. If you’re buying coins just to get that skin or banner, you’re basically looking at spending $24.

At the time of this writing, there are several threads about this controversy on Reddit and dozens of tweets about it.

In a highly upvoted thread on the Apex Legends subreddit talking about the prices of the cosmetics and the coins, one player wrote, “That’s insane honestly, it should be like 2 lol. 10 bucks per character is fair, but asking 11 for a not even that good, character locked banner? Kill me.”

Another player replied, “This is not a good sign of things to come.”

The undercurrent of this anxiety over what this means for Apex is related in part to concerns about EA, which is the parent company of the Apex Legends development studio Respawn Entertainment. Players say they do not like EA, and some are still stinging from some relatively recent events that they blame on the company.

In particular, Apex Legends players continue to bring up how microtransactions were handled in Star Wars Battlefront 2, which eventually had to temporarily disable their loot boxes due to public outcry.

On that same reddit thread, one player wrote, “Jesus Christ, I hope that EA/Respawn see this since it’s at top of the subreddit. I don’t want it to be… like the Battlefront II game…”

Kotaku reached out to EA’s PR manager for Respawn but had not heard back at time of writing.

It isn’t as though players never want to pay for anything in this game. They just don’t want to feel taken advantage of. One of the highest upvoted threads on the Apex subreddit, with over 10 thousand upvotes, is about that very topic. “Respawn, I would not hesitate to impulse purchase $3-5 for cosmetic items,” the title reads. “$11-18 though? GG. Will not even consider it.”