A Puzzle Game Where You Rewrite The Rules Of Each Level

Baba Is You is a puzzle game for Switch and PC. You start by playing as Baba, a rabbit-like creature who can push blocks of words around to change a level’s rules. Soon, though, you’ll be playing as keys, rocks, flags, lava, or any other object you can become or manipulate by rearranging the words that describe it.

Baba is You, made by Finnish developer Arvi Teikari, started as a 2017 entry for the Nordic Game Jam. The finished product includes several worlds on the game’s map, each one made up of clusters of puzzles that increase in complexity.

Most levels I’ve played feature the end goal “flag is win,” which means you need to touch a golden flag to complete the level.

You rearrange individual words to solve the puzzles. There are usually multiple options, depending on where the words are placed. In the above example, you could remove “stop” from “wall” and pass through the barrier. You could attach “wall” to “is push” instead of “is stop” and push it out of the way.

You could make yourself the wall by pushing the word “wall” before “is you.” Or you could make the wall the win condition and touch that instead of the flag. The trailer does a good job showing the basics:

The gameplay is easy to get the hang of, and the aesthetic is cute, but as it goes along, Baba Is You can become very tricky. Puzzles quickly grow complicated; I breezed through the game’s first cluster only to be stumped by the next.

Some levels took me a minute to solve; others close to 10. Words will often be in unmovable locations or completely out of reach, meaning their rules can’t be changed. There might not be enough “is”es, meaning you have to carefully combine phrases.

Sometimes actions need to be carried out in a precise order or number of moves. More complicated conditions like “Baba is float” mean Baba can’t touch anything, or phrases like “water is sink” mean objects will be destroyed on contact with water.

With a quick button press you can reverse your decisions or restart the level, making it easy to experiment. I often worked out a few successful steps before running into a dead end, at which point I would restart and figure out my next moves.

Again, the difficulty ramps up a lot in this game. Here’s an example of an early, fairly easy puzzle:

And below is the level that I’m currently stuck on. The robot moves each time I move, eventually pushing “Baba” away from “is you” and ending my progress. I’ve managed to stop the bot from moving before it renders Baba useless, and I know I need to move the “win” block toward the other available words, but I can’t quite figure out how to do it: 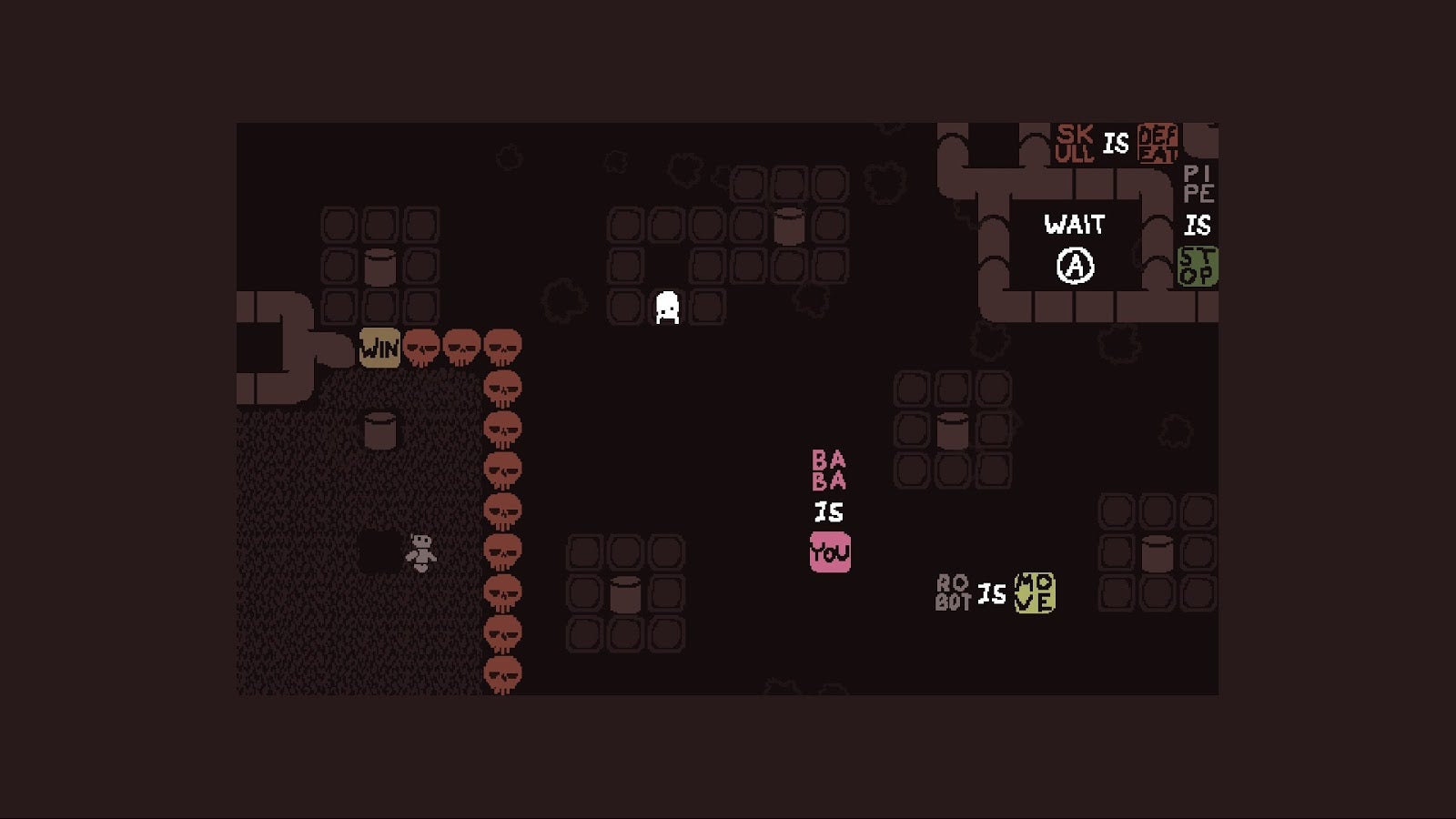 Even when it’s hard, Baba Is You is delightful. The simple art and chirpy soundtrack help to offset frustration, as does the ability to skip certain puzzles in a cluster if you’re really stuck. While playing, I find myself both swearing and smiling. I’m charmed by the game, even when I rage against the devilish placement of words that make a level that seems breezy into a maddening brainteaser.

Similar to coding-based games like The Magic Circle and Human Resource Machine, changing a level’s rules is a powerful feeling. Puzzling through code logic is a lovely insight into what’s going on under the hood of video games. 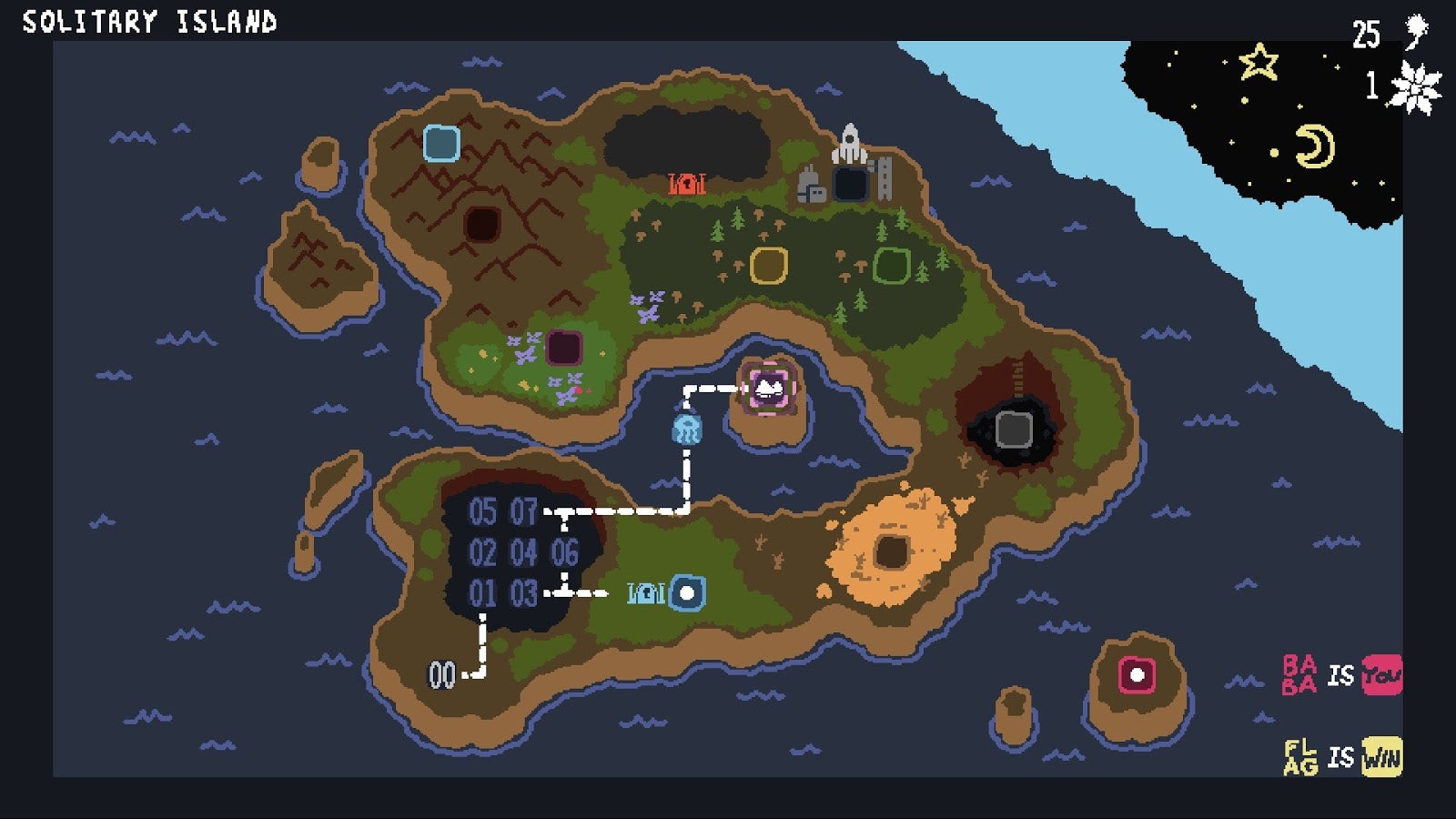 I’ve played about five hours of Baba Is You and have unlocked three of its worlds. The map suggests there are at least 13, including one locked behind a gate that requires flowers to open, earned from completing puzzles.

Though I’ve been playing on PC, I’m already planning to restart the game on Switch, so I can take the game with me and solve a few of its puzzles whenever I suddenly realise a solution.

The game claims to have “over 200 puzzles,” so I have a long road ahead of me and a lot of mysteries left to uncover.