The Pokémon Of Detective Pikachu, Ranked By Their Horrifying Cuteness

When it was first announced, not a lot of people thought a live-action Pokémon movie could work. And then the trailers for Detective Pikachu collectively blew our socks off by presenting realistically-rendered monsters that trade anime cartoonishness for a frankly incredible mix of adorableness and sheer terror.

With two trailers now out for the movie, we’ve seen a pretty solid chunk of Pokémon from across the franchise, from classic first-generation ‘mons like the titular Pikachu, up to more recent additions to the Pokécanon like Greninja. But the thing that’s tied them all together? How much we’ve fallen in love with the fact that these Pokémon look a) completely goddamn nightmarish, and b) are somehow still cute despite that?

To celebrate the Pokéaesthetic that somehow has managed to do a number on us, here’s every Pokémon we’ve gotten a decent look at in the movie so far—outside of a few blink-and-you’ll-miss-’em ones that are too briefly showcased to judge yet—in order of just how well they nail that tightrope balance between freakish and huggable.

Even in its original form Mewtwo wasn’t meant to be cute. It’s a science experiment gone wrong, running about being a testament to humanity’s hubris while also fucking shit up with its mind. It’s genetically designed to be the opposite of cute! So while Detective Pikachu is faithful to that, it also leans wayyyy further into the nightmare by making Mewtwo eerily smooth. It’s (mew)too much. 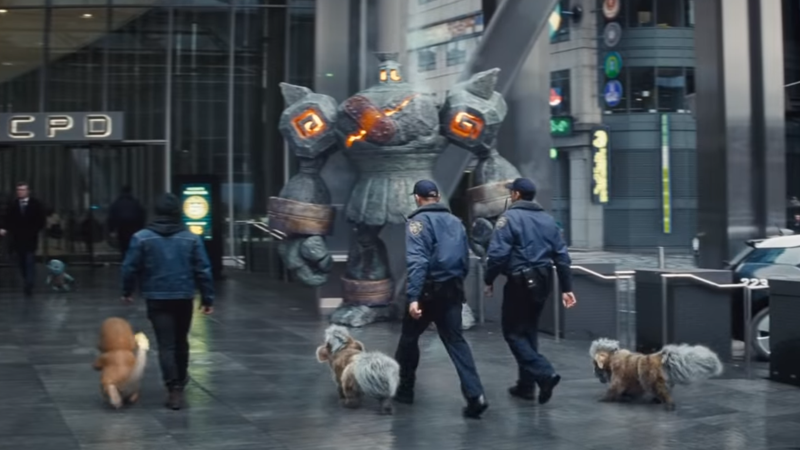 Horrifying, yes, because it’s literally a giant smouldering golem. But that realism also means any softness the cartoon style had given Golurk is lost here. No one wants to consider hugging something oozing molten lava. 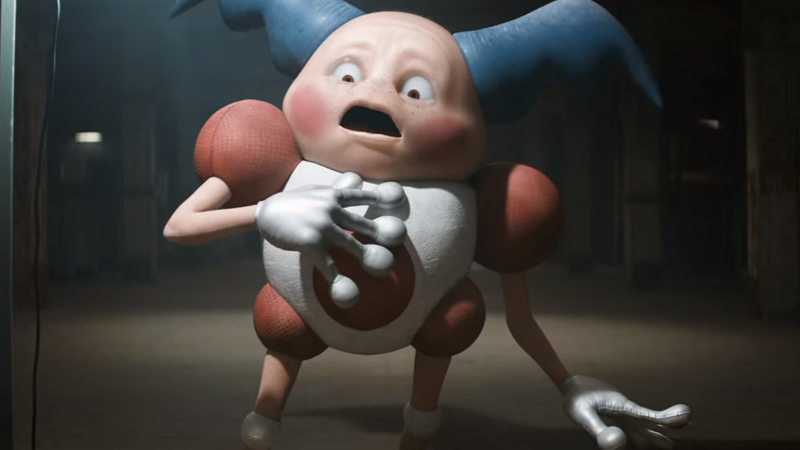 There is simply just too much texture on Mister Mime to consider it anything other than a nightmare. Even if you were charmed by its underappreciated mastery of drama, you’d be hugging what amounts to a slightly hairy basketball. At least it’s got a promising future in the performing arts though. 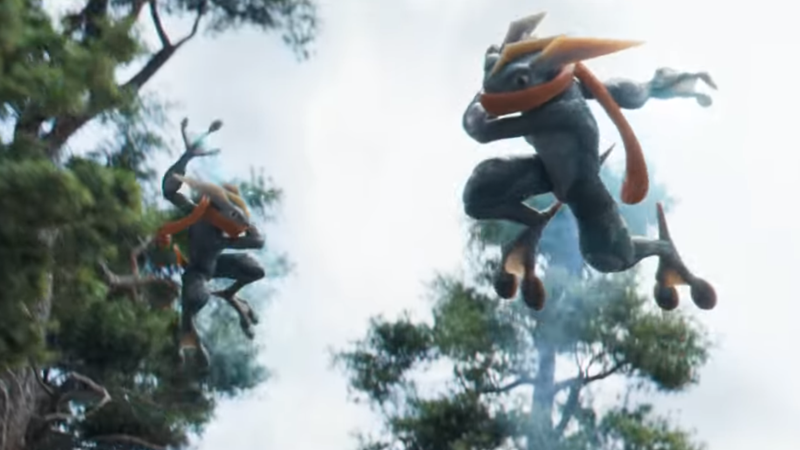 It’s a frog ninja, so there are obviously going to be textural nightmares to consider here, but honestly, Greninja is kind of endearing in the games and anime series, despite it being the edgelordiest Pokémon evolution around (while you were being cute and adorable, it was studying the blade). Here, all you can think about is how painful and disgusting it is that it uses its own tongue as a ninja scarf. 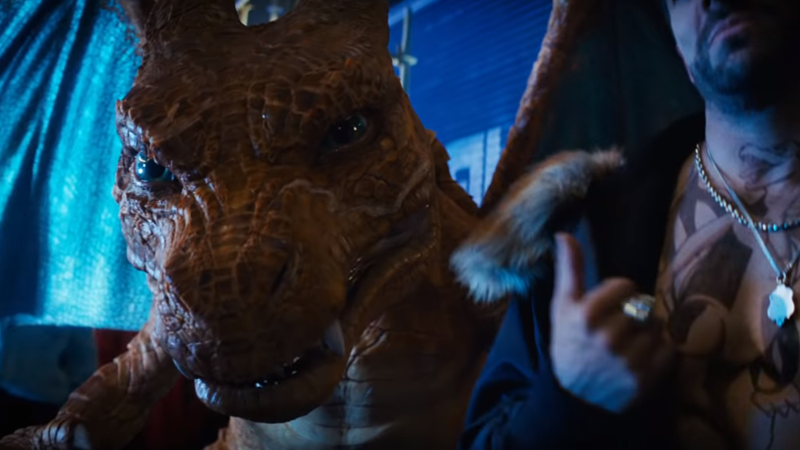 Look, it makes sense that Charizard has scales. It’s a giant fire lizard dragon thing, and making it as smooth as it is in the games wouldn’t make any sense. But losing that softness just makes it more fearsome and less charming. There’s too much scaliness going on here, and Charizard suffers for it. 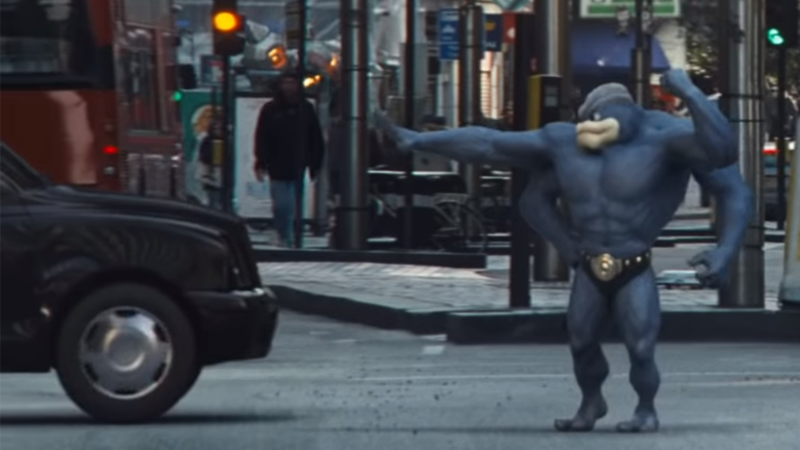 Realistic Machamp makes you consider the world of swole Pokémon, and no amount of cartoon goofballery in its face is going to save you from the fact that there is absolutely a group of people in Detective Pikachu’s world that are into that. 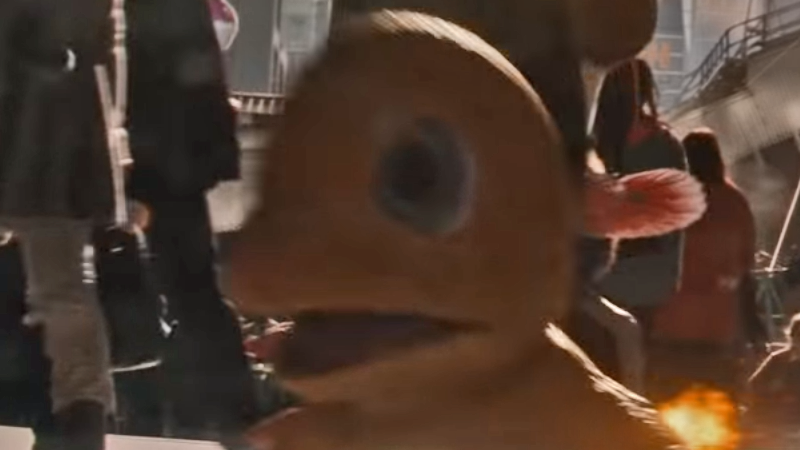 OK, so we only very briefly see a Charmander from the front in the trailers, but I’m making an exception here as I picked Charmander as my very first Pokémon starter and I’m writing this blog, so those are the rules. But while this is a very good little Charmander, it actually suffers from the opposite problem of a few other Pokémon here—it’s too cute. There’s not enough nightmare here, from its giant anime eyes to chubby body, to its just-right level of furriness. Charmander my perfect little friend, you are too precious for this weird, hellish Detective Pikachu world. 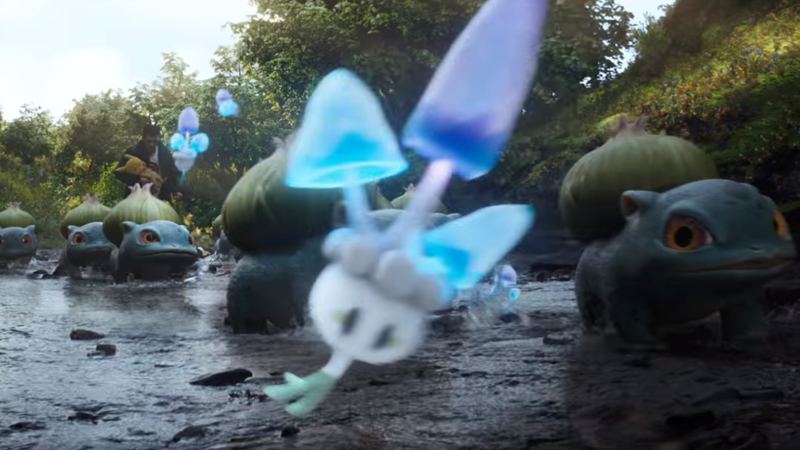 We get a decent shot of a whole flutter of Morelulls in the first trailer that’s weirdly beautiful, until you see one up close and are forced to consider the nightmare that is fungal Pokémon. It’s a floating mushroomy spore thing, and that is scary. 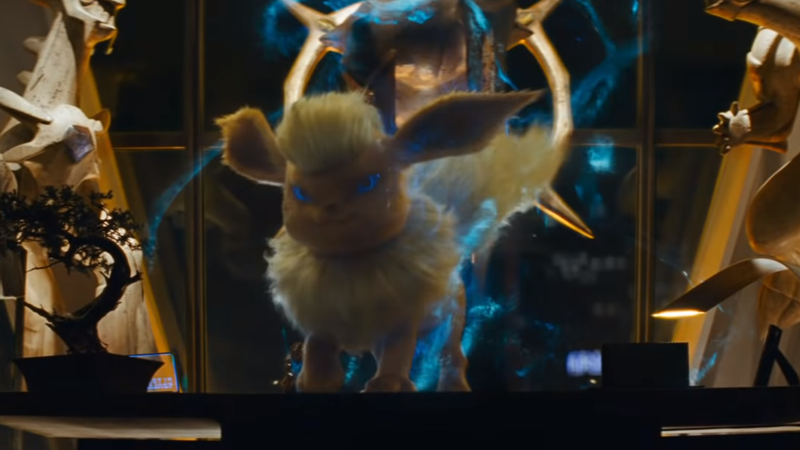 The best Eevee evolution continues to be great here, if only because you realise there can be such a thing as too much fluff in this world. For a Pokémon that’s all about setting stuff on fire, that seems like a bad idea. 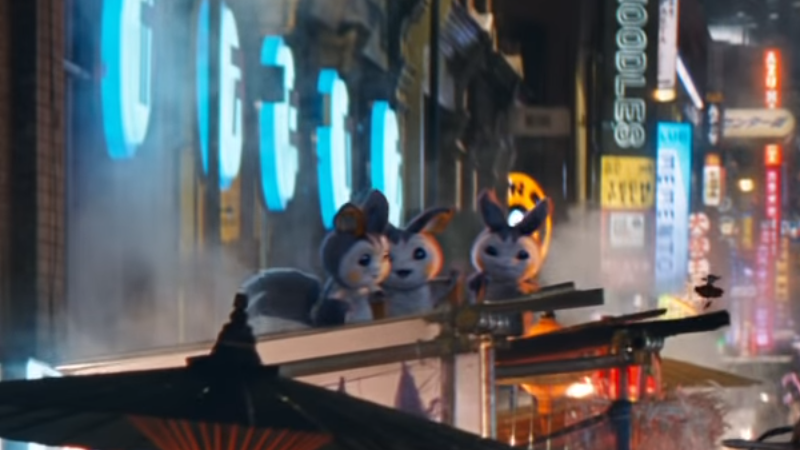 We get a pretty decent look at a flock of these critters during the first trailer’s marketplace scene, and oh my god, it turns out no Pokémon should ever have all-black eyes. They look like they’re planning your murder at their tiny, adorable hands. 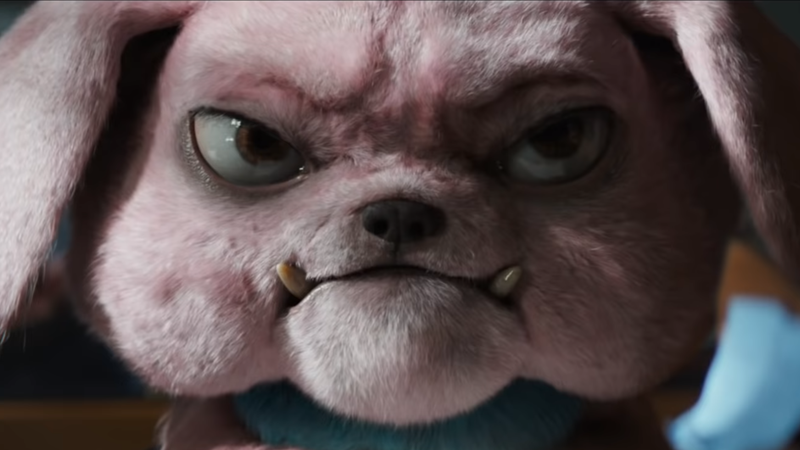 Such an angry little dog! As good a translation of the original design this is, that actually means it’s more funny than it is nightmarish to see it rendered in this realistic form. Snubbull’s eyes still look absurdly cartoonish despite being set in a furry head. Detective Pikachu’s Snubbull is a cop though, which is honestly where a lot of the disconcerting fears come from rather than the design itself. 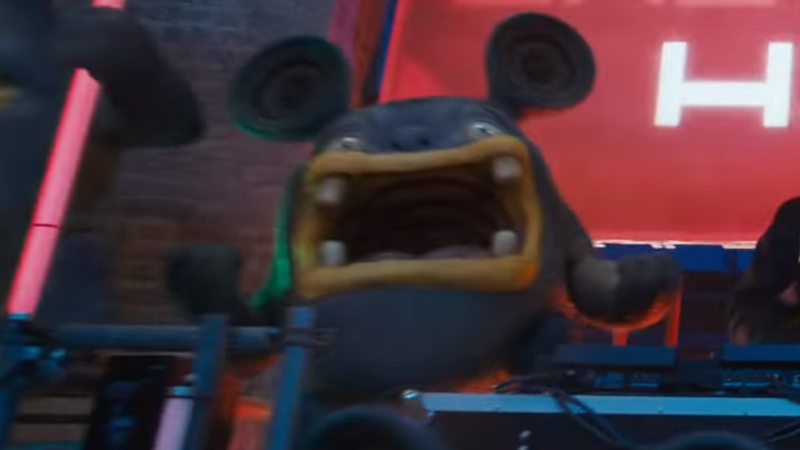 This is where all you Gen-1-only fans start going “Oh, Pokémon designs are too weird now, back in my day we had proper designs like a literal ball or this pile of toxic sludge, harumph.” Well, nuts to you, because Pokémon have always been weird and dumb and cute, and that’s the point. Anyway, Loudred is still that, and it’s kind of amazing that the movie didn’t actually have to do all that much to its design to keep it cute and nightmarish. 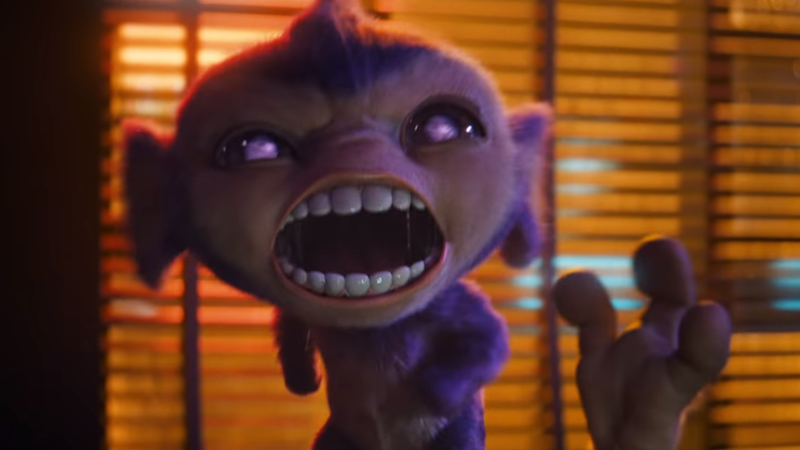 Aipom is a monkey with a hand attached to the end of its tail. That’s some petrifying shit. So kudos to Detective Pikachu for choosing to not lean into that as much as make Aipom’s face be 90 per cent yearning maw as its terror instead. 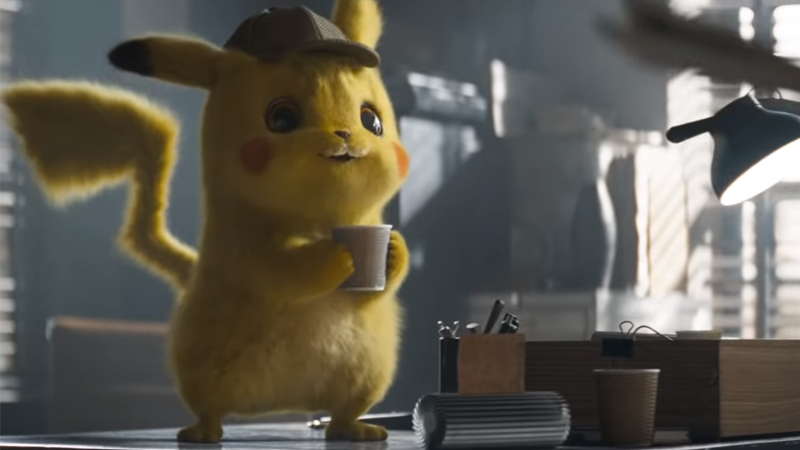 The Pikachu design was perhaps the most demanding for Detective Pikachu to get right. After all, he’s the star of the film—and easily the most recognisable Pokémon of all time. You can’t get it wrong. How the aesthetic works for Pikachu is what’s then applied to every other Pokémon in the film. And it definitely works here, but it ends up making it a bit too middle of the road—not too excitingly horrifying, not too achingly cute. Love the hat though.

Cubone is an adorable Pokémon that fans know has an incredibly heartbreaking backstory, and if Detective Pikachu comes within an inch of telling that backstory I will be in tears, so the horror here is more existential than it is in the design. The fact remains though: it’s a baby wearing its dead mum’s skull. That’s rad. And messed up. 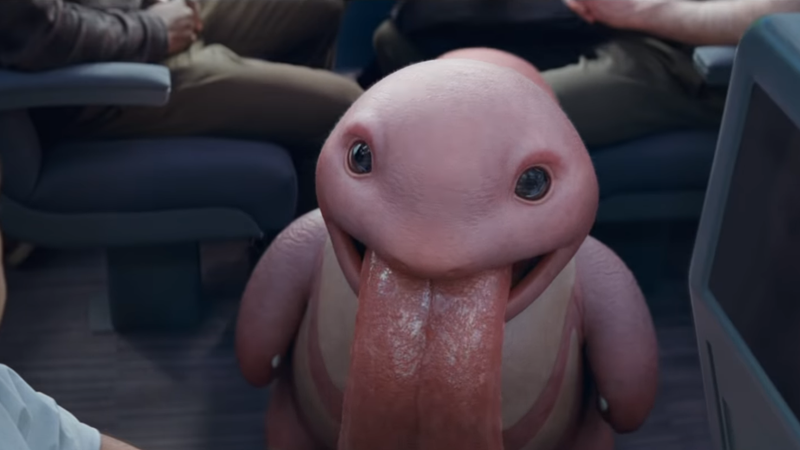 LOOK. AT. ITS. TONGUE. It’s probably super gross, and been in places or on things that I would never want to touch. And yet…you’d prod it, wouldn’t you? Just to see what the texture was like. 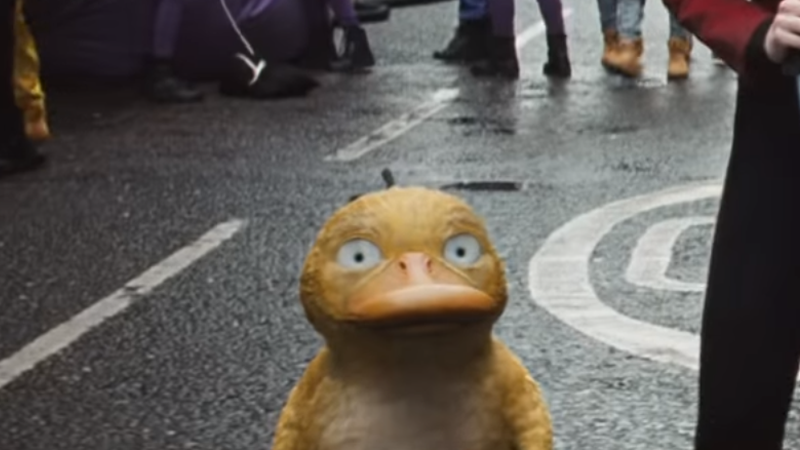 Ask anyone who’s fallen in love with Psyduck—so any Pokémon fan with taste—what it is that draws them to the goofy little thing, and it’ll probably be those beady little eyes. The eyes of Psyduck in Detective Pikachu are similar, but only because they draw you in to consider the nightmares they have witnessed. I’m assuming so many. 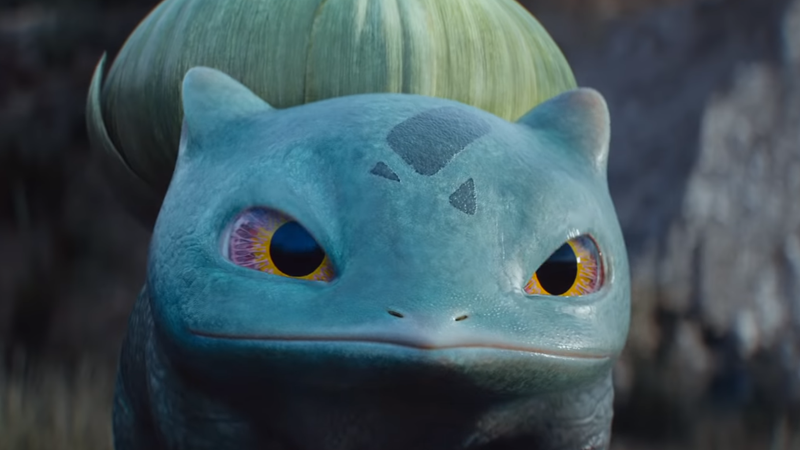 Bulbasaur’s so leathery. And the plant on its back having little curling leaves, like the living thing it is! It’s a little gross, but with all the cuteness of the classic design. And yet, so leathery. Even better than the Funko Pop. 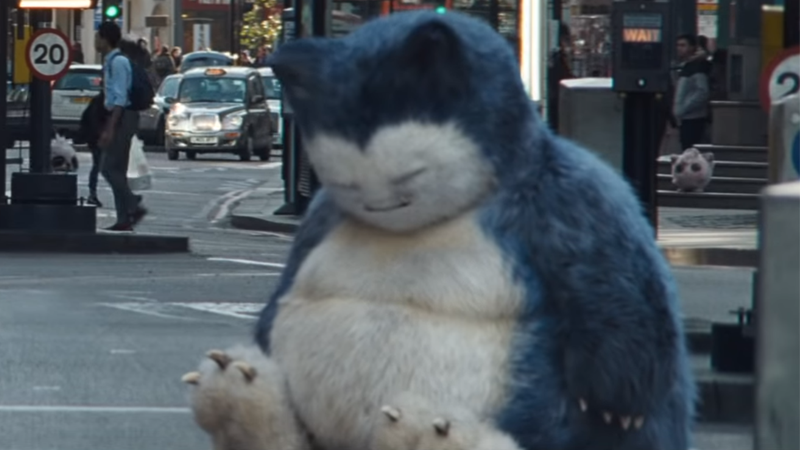 In awe at the size of this lad, frankly. The sheer scope is what makes Snorlax petrifying here, even if it looks absolutely huggable just sitting there in the middle of a crossroads like a traffic accident waiting to happen. 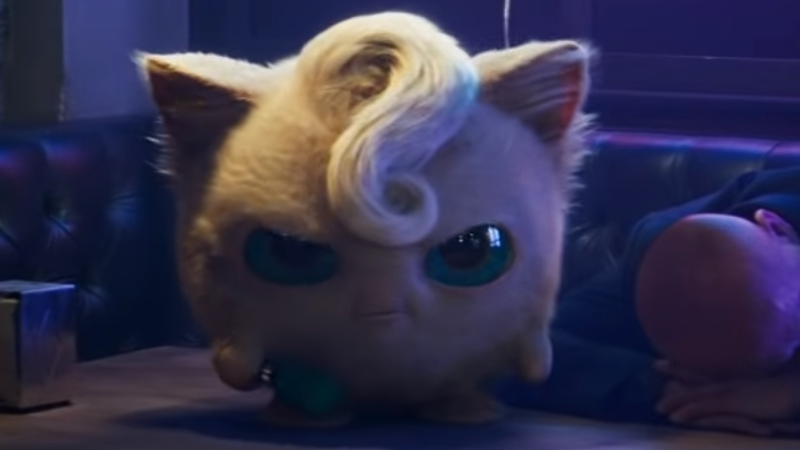 In two decades of loving Pokémon, not once had I considered the possibility that Jigglypuff had fur, despite the fact it clearly has a curl of hair atop its head. Thank you, Detective Pikachu, for showing me the light.

The eyes. The body that is essentially a giant beard. That scream, and the way it’s almost like an involuntary tic. Petrifying. Adorable. I love it.

There are still more Pokémon to be seen in their beautiful, petrifying forms before Detective Pikachu hits theatres May 10. But they have a high standard of cuteness and freakishness to live up to, given the quality of the Pokémon we’ve gotten a good look at so far.