What We Loved About Shazam

DC Comics’s latest superhero movie, Shazam, really took me and my colleague Mike Fahey by surprise. In world of dour superhero stories, Shazam was a wholesome, feel-good breath of fresh air. Today we sat down to talk about the film, family, and how hilarious it is to see a child in an adult’s body.

Gita Jackson: Hey Fahey! A pleasure as always. We’re here to talk about Shazam, a movie I wasn’t all that interested in before I saw it but really touched me once I was in the theatre. I cried a little! How’d you like it? Have any history with the comic book character?

Mike Fahey: Have I ever!? Actually, not too much. When I first got into comic books in the early 80s, Shazam, AKA DC’s Captain Marvel, didn’t feel like much of a player. He was old-fashioned (the character debuted in 1941) at a time I was looking for more mainstream, modern fare like the stuff Marvel Comics was doing at the time. It wasn’t until his appearance in DC’s spectacular Kingdom Come series in the late ‘90s that I connected with the character. Ironically, the movie channeled that old-fashioned, feel-good comics vibe that put me off Shazam as a kid, and I loved it.

Gita: What I really appreciated was that they took the stuff about Billy Batson being an abandoned kid very seriously. This movie also doubles as a tool to getting more people to consider being a foster parent. It actually made me think about it seriously, for the millionth time. But I do love “chosen family” type stories, and this movie hit all those beats very capably. I love those rascals.

Fahey: Oh, you just knew Billy’s search for his mother wasn’t going to end well. To think he hunted for her for years, hoping that she somehow just lost him, blaming himself for wandering off. It hurts thinking about it. He’s incredibly lucky to end up with what seems like the country’s greatest, friendliest foster family ever. And it made me think as well. Maybe my children would be better off with a foster family! Seamus would make an awesome superhero. And Archer would make a great superhero’s brother.

Gita: To set up the plot very quickly: this is the story of the rambunctious orphan Billy Batson, who is on the search for his mother, who he lost at an amusement park. He’s taken in by a group of other foster kids, and then given the powers of the wizard Shazam, which turns him into a superhero, and also an adult. It’s basically like Bringing Up Baby, but instead of a tiger, the unpredictable animal Billy and his foster brother Freddy have to take care of is a man in his mid twenties. This movie was, first and foremost, hilarious. My whole theatre was laughing. They really sell the whole joke of “fourteen year old in an adult’s body” very well.

Fahey: Right? That concept alone is what makes Shazam perfect for a mass audience. It’s Big with superpowers, and the movie makers leaned into that. There was even a giant floor piano.

Gita: The giant floor piano scene had me cracking up! Mark Strong, who plays the villainous Thad Sivana, was really, really enjoying being evil.

Fahey: Children dream of being adults and/or having super powers. Adults dream of being kids again. It’s everybody’s dream. Except for poor Sivana. Imagine being Thad during that opening. Riding in the car with your father and brother, being told you were useless and nothing, then having a freaking magical wizard confirm those unworthy feelings to be true? Man, screw that wizard. 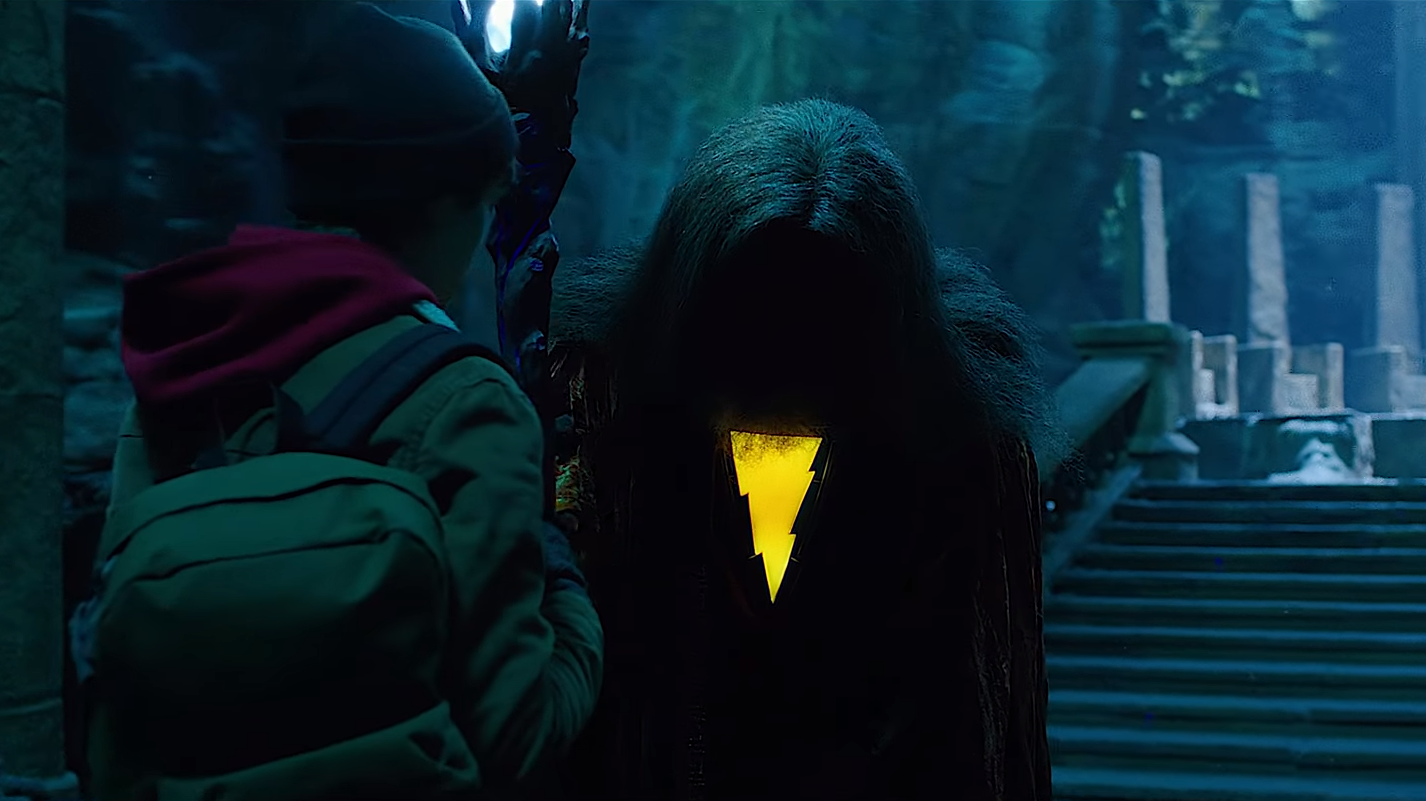 Gita: That wizard was a pretty insensitive guy, in my opinion. He should have linked up with a child psychologist or something instead of telling what the movie implies is thousands of children that they suck arse.

Gita: I mean if that happened to me I might have devoted my entire life to gaining enough power to take my revenge. Children are spiteful.

Fahey: I would not want to be the wizard on the other end of your revenge plot.

Gita: I feel like this movie should have come out at Christmas or more into the summer. It’s such a crowd pleaser and is just thoughtful enough that it both doesn’t take too much of your brain to process, and really gets you thinking about the things in life that matter. By the end of the movie, this guy sitting next to me was calling out at the screen stuff like “are you kidding me?” and “wow holy shit!”

Fahey: It feels like a Christmas movie. Hell, the finale takes place at a Christmas fair. Santa makes several cameos in this. And Billy gets the greatest present of all. His little sister.

Gita: That was part of why I started crying. Seeing Billy accept his adopted family as his real family… the tears just started flowing. The ensemble cast of kids was great. it’s hard to find good child actors and they found a lot of them. I definitely loved Freddy Freeman.

Fahey: Freddy made me mindful of my current disability (for those unaware, I am paralysed from the chest down). His attitude feels a lot like mine, ready to make fun of himself, taking it in stride. And I had forty-five able-bodied years. He’s a kid. I was inspired. Of course, I identified more with Eugene Choi, the gamer of the group.

Gita: Eugene was so sweet! Darla was the one I identified with, though. The sweet little over-achiever that just wants to be friends with everyone!

Fahey: Oh, the hugging, and the secret-keeping, and the cheering. Older sister Mary and Freddy are the better-known of the Marvel family siblings, but Darla is my favourite. I want to discuss the movie’s finale, but want to make sure we hit the pertinent plot points first — but it’s a pretty simple storyline, once the intros are out of the way.

Gita: The movie is formulaic, but for a superhero film, I didn’t mind that. At this point it’s such an established genre that not hitting certain aspects of the hero origin would have felt out of place. The point of this movie is to make you feel good and hopeful, and it definitely achieved that.

Fahey: Except for the moment my heart just shattered. The moment I was surprised was in the film, really.

Gita: You mean the moment I wanted to scoop little, brave Billy Batson into my arms and tell him that everything will be OK, and he’s a good boy, and he has a family already and they love him?

Fahey: No, not that … oh yeah, that’s the one. Where he finds out that instead of dying or being kidnapped and held for several years like a considerate parent, his mum was like, “Oh no I lost my son, guess that’s that, bye.”

Gita: I really appreciated the sensitivity that they had in this moment. It’s a big swerve for an origin story like this — his mum was just an overwhelmed single parent that made a selfish choice, not some long lost saint or whatever. I was also surprised that they went that route but I’m honestly glad they did. I can’t imagine how much this kind of story must mean for people who grew up as foster kids or don’t know their birth parents. What helps is that right after this scene, more or less, the movie really hammers home how much Billy’s adopted family cares for him—and he for them—in the finale. Which was amazing but we’ll get to it.

Fahey: There’s a bad parenting theme running throughout the film. Billy’s mum. Sivana’s father belittling him and telling him to man-up, right up to the point Thad feeds him to the seven deadly sin demons that he spent years trying to reclaim from the wizard’s sanctum. Both hero and villain are the result of horrible parenting. But hey, there are good families out there. The family Billy chooses. 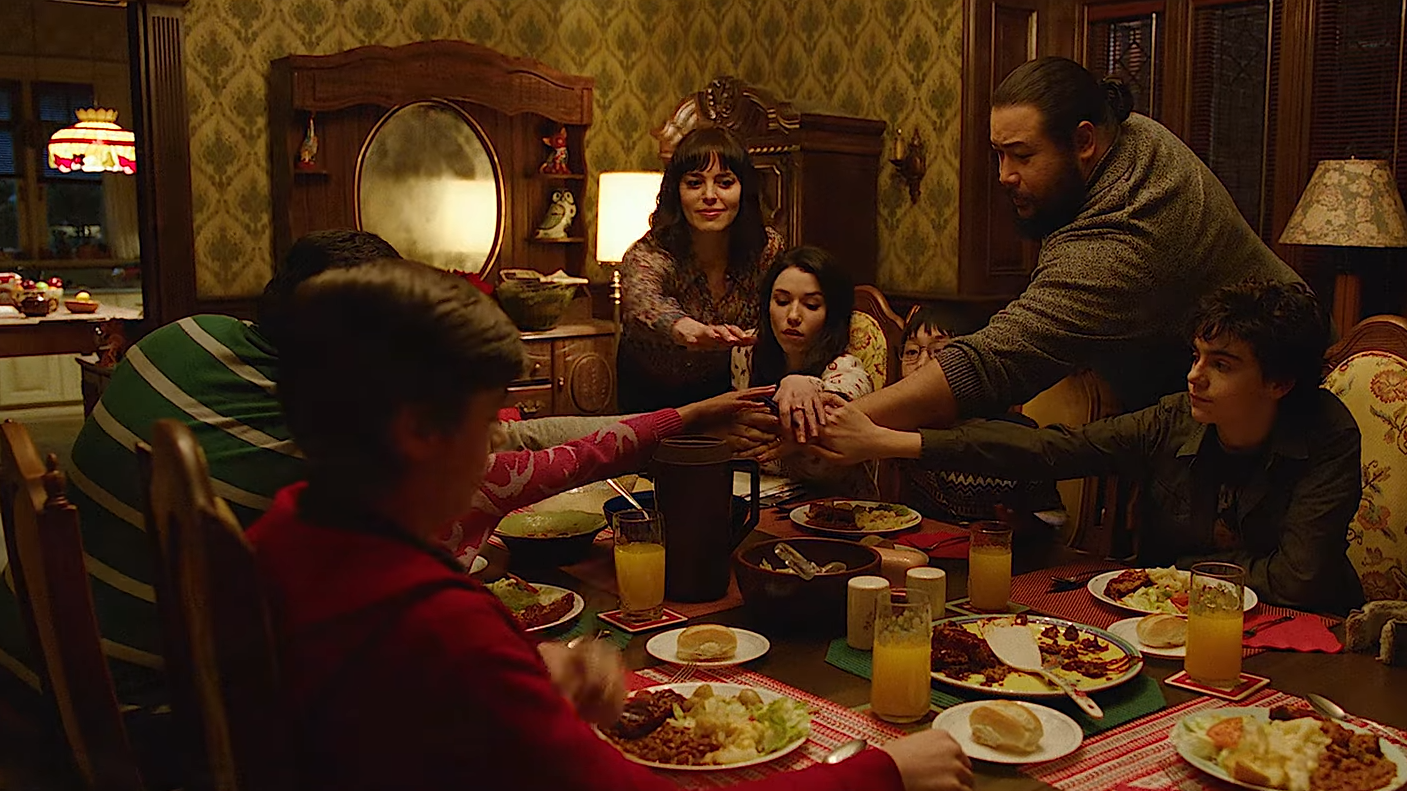 Gita: I’m crying again! They just love Billy so much, and want to give him the kind of chance he never had. The entire Vasquez gang is just… the best people.

Fahey: A fact that’s proven during Billy’s final confrontation with his new nemesis. I did not know or suspect the entire Marvel family would be showing up in this movie. In super-powered form. I audibly shouted “Yes!” and fist-pumped. And no one said anything because I am in a wheelchair and can get away with murder.

Gita: As soon as I saw Adam Brody I started internally screaming. 1) Amazing casting choice for adult Freddy Freeman. 2) I still have a crush on Adam Brody from watching the OC. Seriously the finale when the entire Vasquez fam gets the powers of Shazam had me freaking out.

Fahey: And once again Darla saves the day, this time as Meagan Good. I am glad five more actors got to experience the joy of playing super-powered adult children. Colour-coded. The real Power Rangers.

Gita: Ha! If this movie came out closer to Halloween I’d say to expect a lot of kids dressed up as the Shazam family. The suits with the muscles would probably make kids feel super cool.

This movie on the whole felt closer to the older, Sam Raimi style of superhero movie than the latest offerings from DC and Marvel. I was really happy to just get a very pleasant two hours in the theatre.

Fahey: The movie is DC Comics done right. No dour superheroes taking themselves too seriously in dark and moody films. DC Comics has been silly for decades, and embracing that is the way to go. Take the Flash television series, where showrunners had no problem showcasing villains like Gorilla Grodd, a large, psychic primate, or King Shark, a giant humanoid shark.

Or Doom Patrol, the outstanding series on DC Universe, the latest episode of which showcased a sentient transgender street named Danny and featured an amazing musical number. Silly DC is best DC, and Shazam proves it.

Gita: Man, I should be watching Doom Patrol. Going goofy and wholesome — or goofy and weird as heck — seems like the way to go for DC Comics. I hope we get more movies like Shazam, and also more appearances from Adam Brody in those movies.