animedragon questjapan
Facebook may have decided that you shouldn’t see the news, but we think you deserve to be in the know with Kotaku Australia’s reporting. To sign up for our daily newsletter covering the latest news, features and reviews, head HERE. For a running feed of all our stories, follow us on Twitter HERE. Or you can bookmark the Kotaku Australia homepage to visit whenever you need a news fix.

Last week, the debut trailer for a full CG Dragon Quest anime was released. You’d think that all Japanese Dragon Quest fans would be delighted, right? Well, you’d be wrong.

The movie, titled Dragon Quest: Your Story, won’t be out until August in Japan, but many fans aren’t exactly thrilled by what they’ve seen so far.

As Nifty News reports, Japanese fans have had disparaging things to say about Dragon Quest: Your Story. One reason is that the cast is filled with famous movie and TV talent, like Takeru Satoh and Kasumi Arimura, instead of proper voice actors. The criticism is that instead of finding the best voice actors, the filmmakers relied on big-name celebrities to attract moviegoers.

The other major criticism about the movie so far is that the character design doesn’t have the Akira Toriyama touch. The art style has been changed for Your Story.

In fact, Toriyama’s name doesn’t even appear in the film’s credits—rather, the credits that have been revealed so far. Yuji Horii, Dragon Quest’s creator, is listed as creator and supervisor, and Kouichi Sugiyama, who scores the game’s music, is the composer. 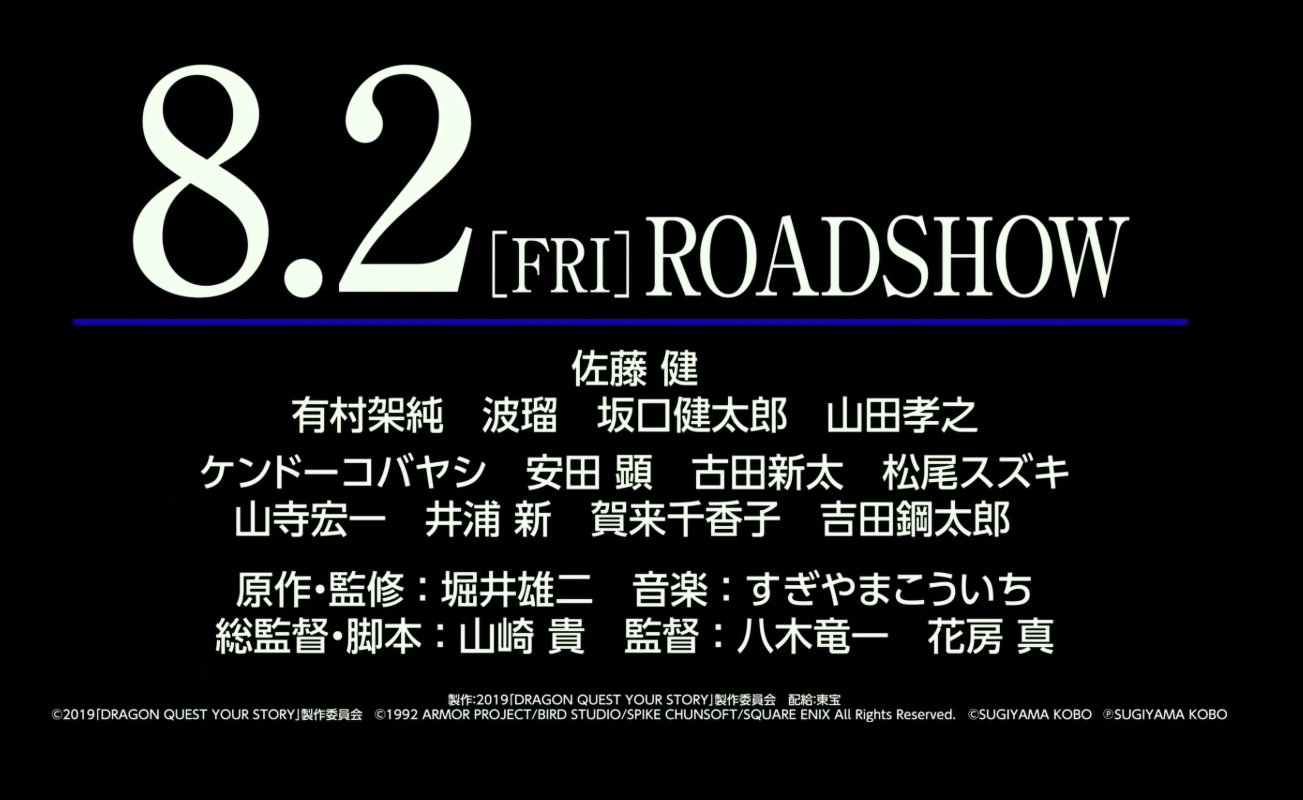 Toriyama’s name is not listed, even though Dragon Quest: Your Story is based on Dragon Quest V, for which he did the artwork. His company, Bird Studio, however, is listed in a copyright slug.

A Japanese entertainment reporter told Nifty News that for the movie, Toriyama’s cute characters and cute monsters were a mismatch with the movie’s heavy story and also because the filmmakers are apparently hoping it can make Dragon Quest more popular outside Japan. If this is true, it’s an odd choice because Toriyama is adored by international anime fans.

On 2ch (here and here), Japan’s biggest bulletin board, not everyone dislikes the new character designs, but many weren’t feeling it, complaining about the voice talent and pointing out that the characters certainly didn’t have the “Toriyama touch.”

Here is a cross-section of comments:

“This looks like something you’d see in a TV commercial.”

“Even though Slime is a Toriyama design…”

“I’d like them to remake the game with these characters for PS4.”

“They did write Bird Studio, so it’s ok.”

“What is this, Disney-esque?”

“With this casting, wouldn’t a live-action version have been better?”

“Nothing has been learned since the Final Fantasy CG movie.”

“Cutting down Toriyama, who is famous for Dragon Ball, is so idiotic.”

“This design looks conscious of the current Pixar style.”

“I thought the reason why foreigners didn’t get into [DQ] was due to what Horii wrote.”

“Worst than this [the character designs] is that the voice cast is awful.”

“These voices are truly awful. Use voice actors!”

“Even though Dragon Ball is so popular overseas, using Toriyama’s art wouldn’t go over?”

“Toriyama is the most important one.”

“Why use amateurs [voice actors]?”

“If they put out a blond-haired hero by Toriyama, foreign countries would be delighted.”

“Even if they change the characters, this looks like it will fail overseas.”