Detective Pikachu Changed The Way I Feel About Pokémon

Detective Pikachu is the realisation of a dream that fans of Nintendo’s Pokémon franchise have had since we first journeyed to Pallet Town and decided which starter would become the first of many partners who’d accompany us on our journey to becoming a Pokémon Master. At some point, we’ve all wondered what it would be like to live alongside Pokémon, and Detective Pikachu capitalises on that desire to create an immersive world of magic and wonder.

But by delving into the minutiae of the Pokémon world and depicting live-action trainers living relatively normal lives, Detective Pikachu had a curious side effect: It’s changed the way I feel about the pocket monsters in ways that none of the other games, television series, or animated movies have.

The idea that you—some random, small-town kid from a single parent home—are destined to become a hero and icon of the nation’s greatest pastime is part of the magic of the Pokémon video games. In each instalment so far, gameplay is fairly straightforward as you set out to collect your region’s eight Pokémon Gym badges from different cities before ultimately challenging the Elite Four, a quartet of the most formidable trainers in the land, to win the Pokémon Master title. As you fill your Pokédex with new monsters and challenge random NPC trainers along the way, other characters like your designated rival often comment about how uncommonly skilled you are as a battler. While the compliments are very nice and all, the reality is that winning battles in Pokémon games really boils down to three things. You have to make sure that your team has a good spread of monsters with different type sets, your Pokémon need to be sufficiently leveled up, and you really should have six Pokémon in your party at all times.

That last bit is particularly important.

Many Pokémon game battles are objectively tipped in the player’s favour because NPC characters often challenge you to fight with only three or four Pokémon. There’s never any reason given as to why, and the games don’t limit you to fighting with the same number, so there are times when your victory can really be chalked up to the fact that your opponent simply didn’t come well-prepared. The deeper you get into the games, the more robust other trainers’ teams become, but the way the earlier parts of the story unfold, it’s difficult not to associate playing the game the “right” way with having a full team, and for me, that informed a lot of my personal feelings about what sort of trainer I’d be if I ever had the chance to become one. 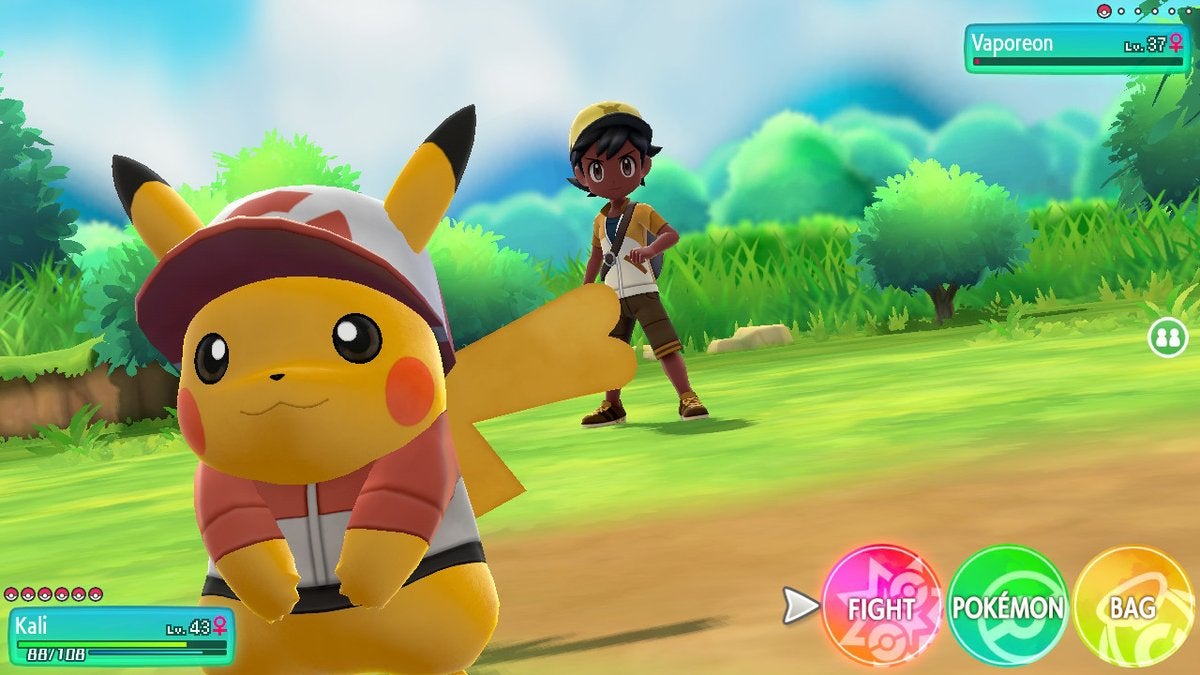 The NPC trainer in this battle is about to lose because they only brought one Pokémon to the fight. (Image: io9, Nintendo)

Both the Pokémon games and animated series are littered with countless trainers who go about their lives with just one or two Pokémon by their side. But because those stories so closely focus on main characters whose success and happiness is directly tied to their large parties, I’d always felt deep down that if a trainer had any fewer than six Pokémon, they weren’t really taking things seriously. But then I saw the first Detective Pikachu trailer…the time and energy that’d been put into bringing the Pokémon to life in a way that made them feel like living, breathing creatures…and something changed.

As more intricate and inspired by the real world as the locales of Pokémon’s video games and series have become over the years, there’s still a kind of removed-ness from reality that makes it difficult to fully project yourself into the fantasy. We’ve been watching Ash Ketchum, an apparently immortal child, bop about from one region to the next for decades, and at no point has it ever felt like the hero or his Pokémon has had to face any real, life-changing moments. We’re told that Pokémon can die—and to be fair, Ash bit the bullet that one time before Pokémon tears brought him back from the dead—but generally speaking, the Pokémon franchise strays away from the less-than-glamorous, mundane tedium of everyday life that makes things feel “realistic.”

Detective Pikachu sets itself apart, not just by simply including them as part of its necessary worldbuilding, but also because the small details applied to Detective Pikachu’s uncannily awesome creatures are where the movie really makes it possible to connect with the Pokémon on an emotional, surprisingly visceral way. Part of the reason people took issue with certain things like Jigglypuff’s fur and Lickitung’s tongue when they first saw them was because, up until now, Pokémon have really only been rendered as cartoons which, while dynamic, lack any sort of photorealistic detail. Even Pikachu, whose fur is often accentuated in the anime when people are touching him, is largely depicted as having a sleek, untextured form.

As alarming as it is to hear Ryan Reynolds’ voice coming out of Detective Pikachu’s mouth, it’s nowhere near as fascinating as just…seeing a Pikachu rendered to resemble its two-dimensional design while also having so many little characteristics that make it feel like an organic being. As I watched a foam-mustached Detective Pikachu sheepishly fiend for more caffeine, I was taken aback at how much I just wanted to hang out with him and how the idea of sending him out to fight other Pokémon felt wrong.

The Pokémon franchise has always posited that Pokémon are sentient companions with complex inner lives and not just pets, but seeing people interact with them in Detective Pikachu emphasises the idea in ways that the games and series can’t. It makes all the sense in the world that a trainer would have one, or maybe two Pokémon when you see a Pangoro lumbering by or realise just how large a Jiggylypuff can actually get in relation to the things around it. Detective Pikachu’s Pokémon have a physicality to them that makes the way they take up space feel significant. You understand why people keep their Pokémon in Pokéballs as a matter of convenience, but you also understand why some trainers choose to let their Pokémon exist outside of them because, on some level, you can’t shake the idea that they’ve got to be uncomfortable inside the things.

Ironically, this ended up making me think about my cat Byron, with whom I have full conversations with despite the fact that he typically only meows or bites me when he feels the need to say something. As much as I love him, it’ll be a cold day in hell before I even consider living with six cats because that just wouldn’t be good for anyone involved. My place would be a wreck, the cats would likely fight, and a significant portion of my life would have to go into making sure that they were all generally healthy. Now imagine if all six of the cats could channel elemental energies or explode at will or move things with their minds…

What Detective Pikachu makes impossible to ignore is that a trainer’s love and attention are vital parts of forging healthy, successful relationships with Pokémon. They need the kind of care and consideration that no sensible person could reasonably split between six different monsters with varying needs at the same time. Perhaps that’s really supposed to make Pokémon Masters such exceptional people—their capacity to fully dedicate themselves to a full team of Pokémon without breaking a sweat. For me personally though, it’d make a lot more sense to just pick one buddy, and do everything I could to make sure that it had everything it needed to thrive and be happy.