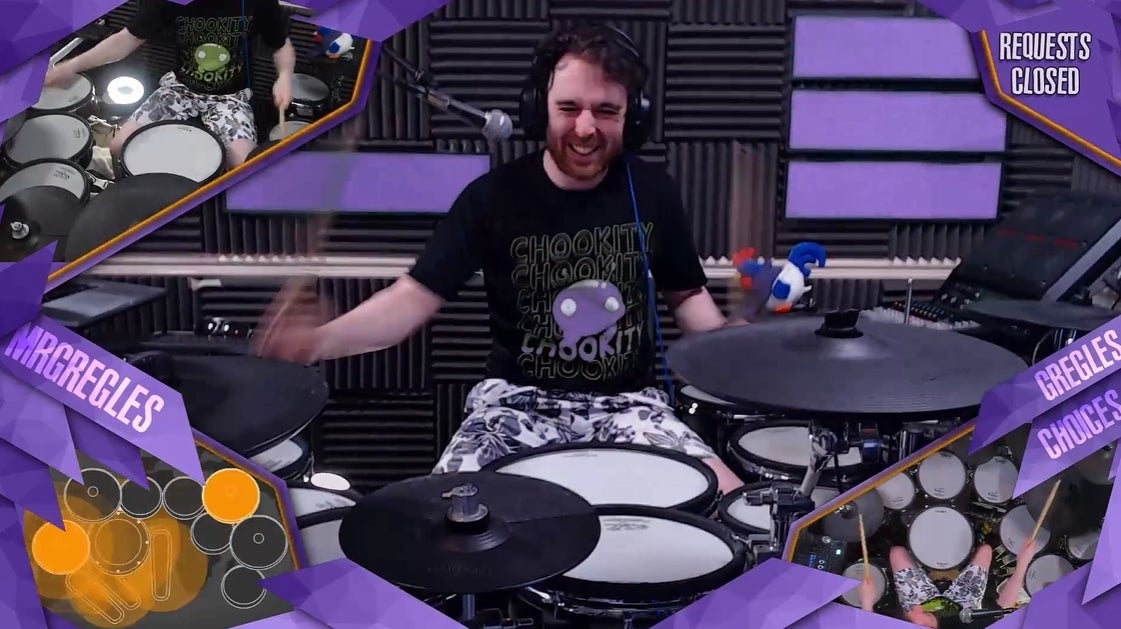 Image: Greg “Mrgregles” Storey
To sign up for our daily newsletter covering the latest news, features and reviews, head HERE. For a running feed of all our stories, follow us on Twitter HERE. Or you can bookmark the Kotaku Australia homepage to visit whenever you need a news fix.

Watching Gregory “Mrgregles” Storey stream, there’s a good chance you’d never even realise he has Tourette Syndrome, a rare neurological condition characterised by repeated involuntary vocalisations and movements, or “tics”. From behind his drum kit, Storey grooves, showboats, and interacts with viewers like he’s been doing it all his life. He regularly puts on rockstar performances surrounded by one of the slickest presentations on Twitch. He makes it look easy, but in reality, he says, it demands every once of concentration he has in him. And that’s the appeal.

Storey, a 25-year-old living in the UK, told Kotaku in an email that he first began experiencing Tourette’s-like syndromes when he was three years old, in the form of an uncontrollable cough. Squeaking and various physical movements manifested when he was five. “I suffered a lot in school from bullying,” he said,”surprisingly mainly from teachers and other adults who would call me just badly behaved.” he said. Storey said people would lock him in the school’s closets. “Told I would ‘never achieve anything,’ which I took as a personal vendetta to prove wrong,” he said.

He now streams his prodigious drumming talents as his full-time career, which probably counts as proving everybody wrong. But the road to that apex was riddled with potholes. Tourette’s has functioned as enough of a roadblock in Storey’s life that he’s been in documentaries about the condition. When he discovered drumming, it was a revelation. He began playing when he was 15, and he realised right away that his symptoms nearly vanished when his mind was laser-focused on the rhythmic task at hand.

“I had tried and, you could say, failed to play instruments previous to this—piano, trumpet and a small amount of guitar—so drumming was my final shot at really getting into music aside from just listening to it,” Storey said. “I remember my first lesson: I hadn’t even learnt to fully play my first beat, but sitting down behind the kit and the amount of concentration it took to coordinate my limbs just seemed to make the Tourette’s disappear!”

Storey credits this to his understanding of Tourette’s as a condition caused by an especially overactive brain, which causes misfires that then lead to chain reactions and, ultimately, unintended consequences. Drumming, especially on Twitch, leaves very little room for that process to occur, he said.

“Especially on stream, all my attention is taken,” he said. “Drumming, talking to chat, etc… pretty much consumes the overactive parts of my brain and utilises them. Which in a way is a blessing, as it means when I put my mind to something, I’m usually able to learn and achieve it faster than someone without Tourette’s would. A blessing from a curse, almost.” 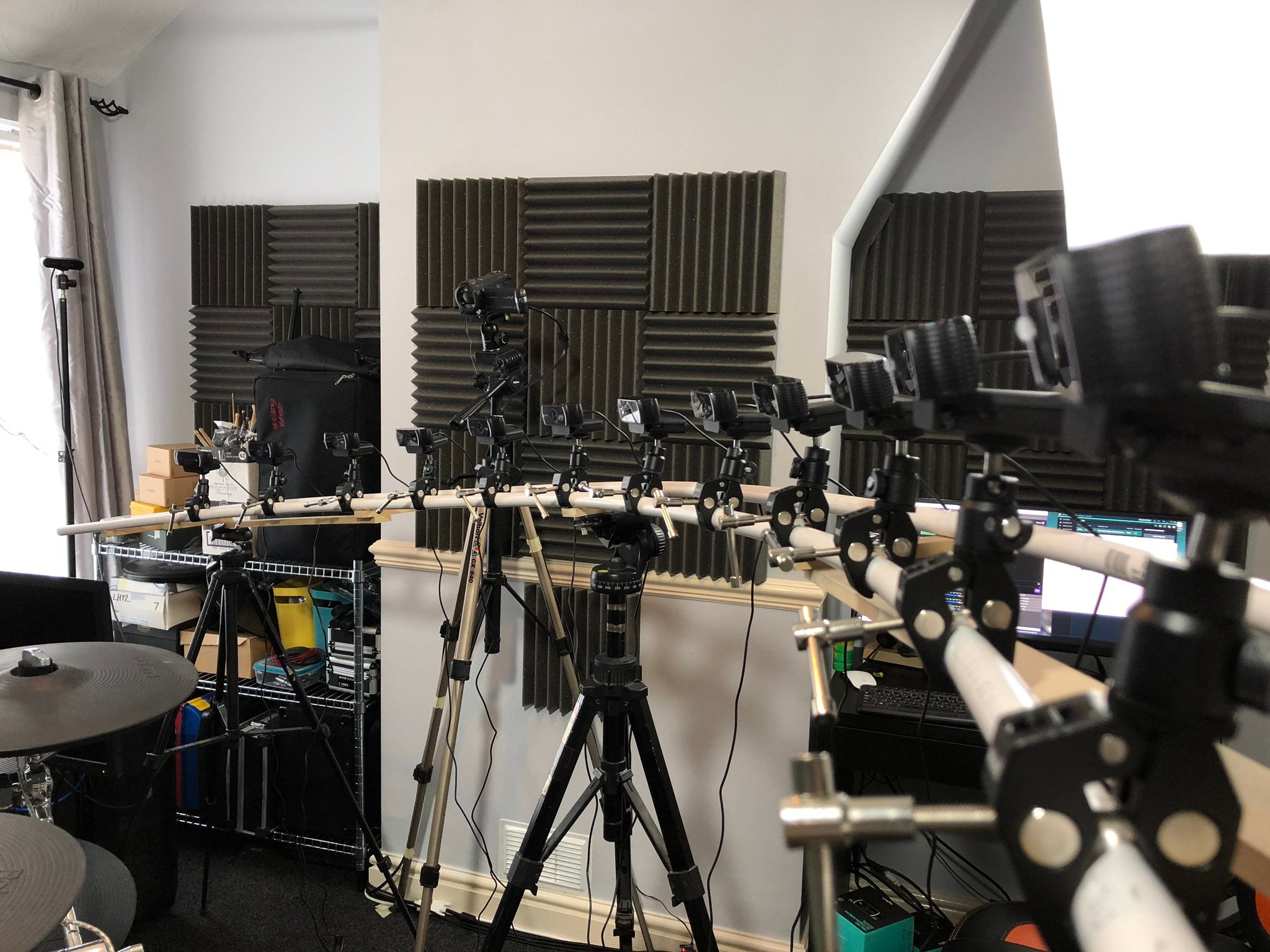 When Storey first started streaming, he didn’t yet realise he could turn drumming into the cornerstone of his stream. He tried playing video games as a part of a small group of friends who all started out on Twitch at the same time, but quickly found that he was “not the best at gaming and reading the chat, so I didn’t get many viewers.” Then a friend showed him a streamer called The8bitdrummer, who’d amassed a decently-sized following through drumming. At the time, Storey was a session drummer under the tutelage of Craig Blundell, now drummer for prog rock legend Steven Wilson. He was good, in other words, and learning from the best. He decided to take a crack at drumming on Twitch.

It paid off. These days, Storey is a partnered streamer who makes his living on Twitch. Aside from playing music, his favourite element of the gig is tinkering. Over time, he’s assembled an elaborate 20-camera setup, which Twitch chat can control using a series of chat commands. For example, “!bullet” triggers a Matrix-inspired bullet time effect in which 12 separate cameras pan around Storey while he drums. Sometimes he even drums blindfolded.

Storey has experience has a visual effects artist and a tech enthusiast, which inspired him to try and create “the best produced stream on Twitch.” It’s taken him two years to assemble his current setup, but he’s proud of the results. Especially the whole Matrix bullet-time effect.

“Previous versions of the effect could only be done through recording then editing footage together,” he said. “I am the first person to ever do this on Twitch,” he said, and possibly even the first person to ever do it live. Storey has collaborated with the streaming software company Stream Elements to achieve this, and he hopes to work directly with Twitch in the future.

Storey’s favourite part of streaming isn’t the drumming itself, he said, it’s tinkering with the production to perfect it, and inspiring others to do the same. “I work a lot to help other streamers push their shows to make them their own, too, which personally means a lot when someone says they look up to my stream as an example, which in turn just pushes me to go further with advancements,” he said.

“I’ve built an incredible and supportive community on the platform, and it’s a true joy to perform every week for them on Twitch.”