I’d heard stories about Strong Terry. Whispers. Rumours. Wide-eyed tales of his boldest feats. He’d be the one to bring me down, they all said. The beloved big boy who never skipped leg day would stomp all over me, even though I’m a cold-blooded samurai assassin. I wouldn’t stand a chance. Except then I killed him without even realising it.

This all happened to me early in Katana Zero, a cyberpunk samurai game in which you can manipulate time. Its action sequences are sublime, each room a little puzzle you have to solve using a mixture of planning, wits, and improvisation. Every fight is a dance where one wrong move means brutal death. It’s like Hotline Miami if the main character was on even more cocaine. But Kotaku contributor Keza MacDonald already wrote about that. I want to talk about Katana Zero’s writing.

A lot of it is bad. Or at least, not what I’d call good. The central narrative is purposefully inscrutable to achieve an effect; you play as a samurai who’s addicted to a drug that gives him the power to slow down time, but it also fries the heck out of his brain. He — like you — doesn’t know much about his past, or even his present, beyond the fact that he receives regular injections from mysterious benefactors who tell him to kill specific targets each day.

The game uses this framing device and glitchy audiovisual effects to achieve a uniquely grimy, foreboding feeling rooted in your character’s irreparably addled state of mind. Time skips. Memories slowly unfurl themselves over time. That part is rad. 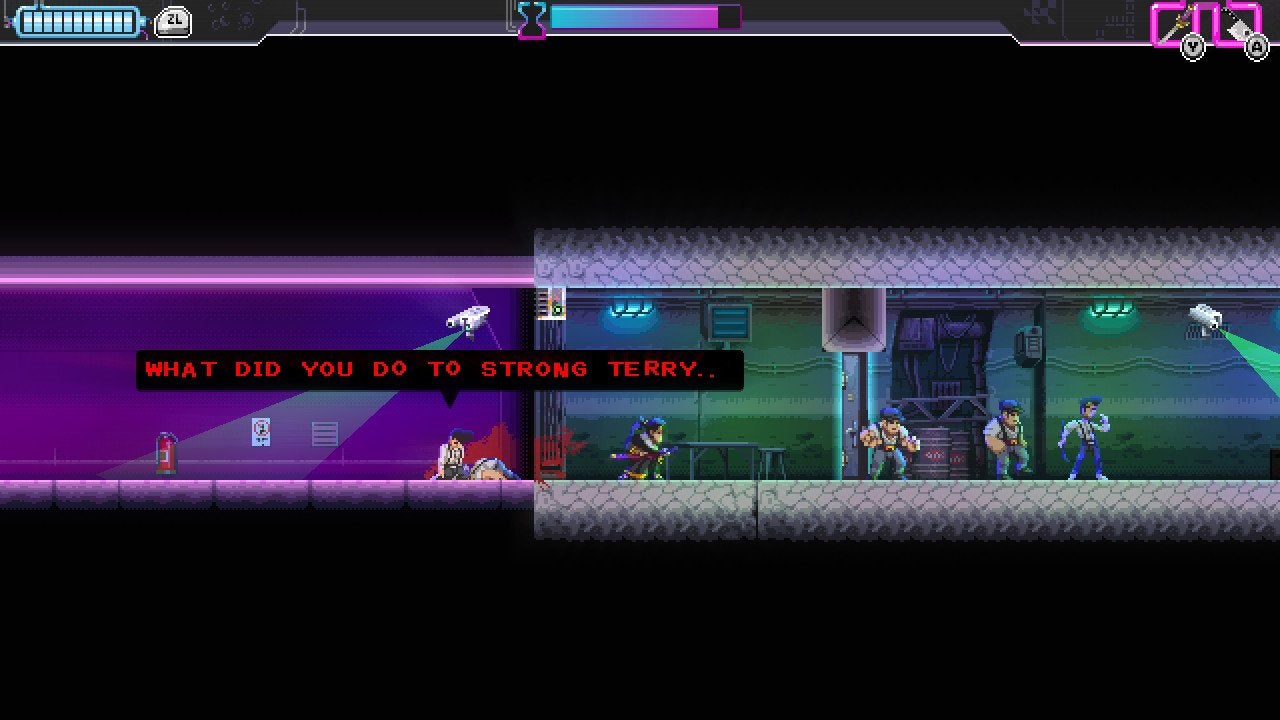 What ends up unfolding is a mystery box story that’s compelling while you’re experiencing it, but that ultimately rings hollow. There are no real emotional stakes, save for your character’s attachment to a little girl who’s both a cliche and the walking embodiment of emotional manipulation. The game ends on a cliffhanger, with many central characters barely introduced, let alone fleshed out.

The game does have several smart little touches that more successfully made me care about Katana Zero’s world. The game’s narrative is excessively dark most of the time, but it balances its tone with humour that is, well, still pretty darn grim. This brings us back to Strong Terry. If you chill outside of rooms before charging in and severing tens of heads from an equal number of necks with balletic grace, enemies will sometimes chat amongst themselves.

In one of the game’s early levels, I overheard two baddies arguing over who’d win in a fight: me, the ruthless killer who’d been devastating their ranks, or Strong Terry, the tough guy with a heart of gold who never skipped leg day. I figured he’d be a boss or something, perhaps later in the game.

One level later, I burst into a random room and cut down a random dude. I was about to kick down the door into the next room when another guy ran in. “WHAT DID YOU DO TO STRONG TERRY?” he bellowed as he stood over the guy’s extremely decapitated body. Then he swore vengeance on me, but before he could even complete his sentence, I cut him down too. I laughed and figured that was the end of it. 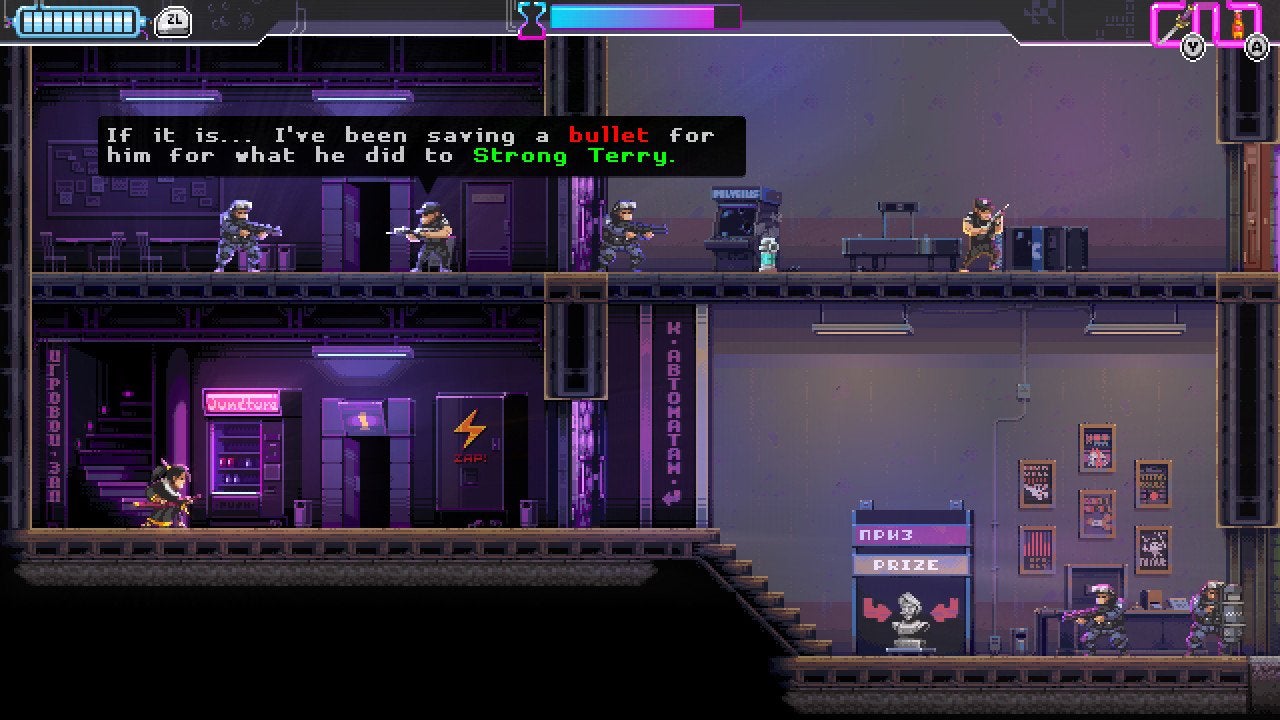 It wasn’t. In between levels, your character returns to his apartment. There, you can drink tea and watch the news. After recounting my latest grisly crime, the newscaster then made specific mention of the fact that beloved local mainstay Strong Terry had died in the attack. Towards the end of the game, I encountered an armed soldier eulogizing Strong Terry. “RIP Strong Terry,” he said. “You’re lifting with Baby Jesus now.” The soldier he was talking to said he’d been “saving a bullet” for me for what I did to Strong Terry.

Katana Zero kept this gag running for my entire playthrough, and I admire the commitment. I talked to other people who missed it entirely, which made me appreciate it even more. But the joke is also clever on a macro level, since it adds to the feeling the game is trying to create. Your character is an utterly remorseless drug-fuelled killer.

Maybe these enemies are individuals with their own lives, names, and faces, but he doesn’t see it. They’re just bodies. Some are big and slow, like Strong Terry, while others are nimble and deceptively dangerous, like the pompadour-sporting team of “Skinny Rickies.” You can witness them all having their own council meeting—just before slaughtering them. Your character views all of this as dispassionately as, well, somebody playing a video game.

You can interrupt people when they’re talking about this stuff, too. When your character dies, he just rewinds time, so you might see the same conversation begin to play out 10 or 20 times. When I was playing, I’d listen to them through to the end once, but after that, I’d slice up hapless baddies and their buddies before they had time to get a word in edgewise. The game responds to this behaviour in a fun way: When you take your sword to somebody while they’re talking, letters spill out of their speech bubbles like spurts of blood.

Dialogue shares this interruption system. When characters are talking at you, you can hammer a big red button, allowing you to rage at people to get to the point, to give you answers, or to give you drugs. If you wait on pressing that red button, you’re presented with more considered dialogue options. At first, I tended to wait, but after I killed Strong Terry and his heartbroken buddy, it began to feel truer to my character to just charge through conversations—to scatter words, thoughts, and ideas like so many bodies.