One Of The Coolest Rhythm Games Ever Is On The Switch 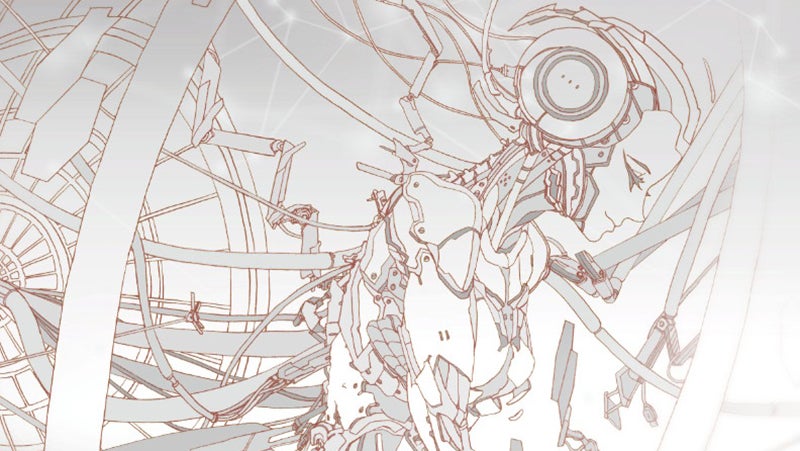 Originally released for iOS and Android way back in 2012, Rayark’s Cytus is one of the sleekest, most stylish rhythm games out there. Recently the game came out on the Switch as Cytus Alpha, and with more than 200 songs (including previously unreleased tracks), a cool sci-fi story and the ability to play with buttons instead of the touch screen, it’s never been better.

Taiwanese studio Rayark has been making excellent mobile rhythm games for years, from the haunting, piano-driven Deemo to the multi-lane chaos of Voez. Cytus, one of the studio’s earliest rhythm games, is the latest to get what I call the Rayark Switch treatment.

The studio takes a mobile rhythm game that’s free-to-play with tons of purchasable song packs and turns it into a Switch game with every song included in the purchase price. They did this with Deemo and Voez, and now they’ve done the same for Cytus. For $75, players get the entire game with all the trimmings.

The gameplay in Cytus Alpha, as with its earlier incarnations, is focused on the Active Scan Line, a black line that travels up and down the screen while a track plays. As the line moves, notes appear that must be tapped as the line passes through them. There are hold notes which require you to hold your finger down rather than tapping it, as well as drag notes, which must be traced. Three simple note types and a couple of difficulty levels is all Cytus needs to provide a significant challenge.

Watch as Kotaku’s own Paul Tamayo tackles a challenging track in its easy form.

The 200+ tracks in Cytus Alpha are a wonderfully eclectic mix of genres, the likes of which fans have come to expect from hardcore Taiwanese and Korean rhythm games. Pop, metal, heavy electronic, noise, vocal and instrumental—there’s something for everyone here. There’s even a DJMAX chapter with songs from the grandaddy of finger-tapping rhythm games. Watch YouTube’s Moonlight knock one of my favourite tunes, “End of Moonlight”, out of the park.

What makes Cytus Alpha so cool isn’t just the music. There’s a story that unfolds as players progress. You can unlock new chapters by achieving target cumulative scores in the previous ones. In a future version of our world where humanity is nearing extinction due to a mysterious plague, the human race lives on by preserving memories in sentient robots. Because storage space is limited, emotions are stored as songs. The robots must play these songs to revive their human emotions. The story unfolds through news reports and other documents, unlocked as music is played. 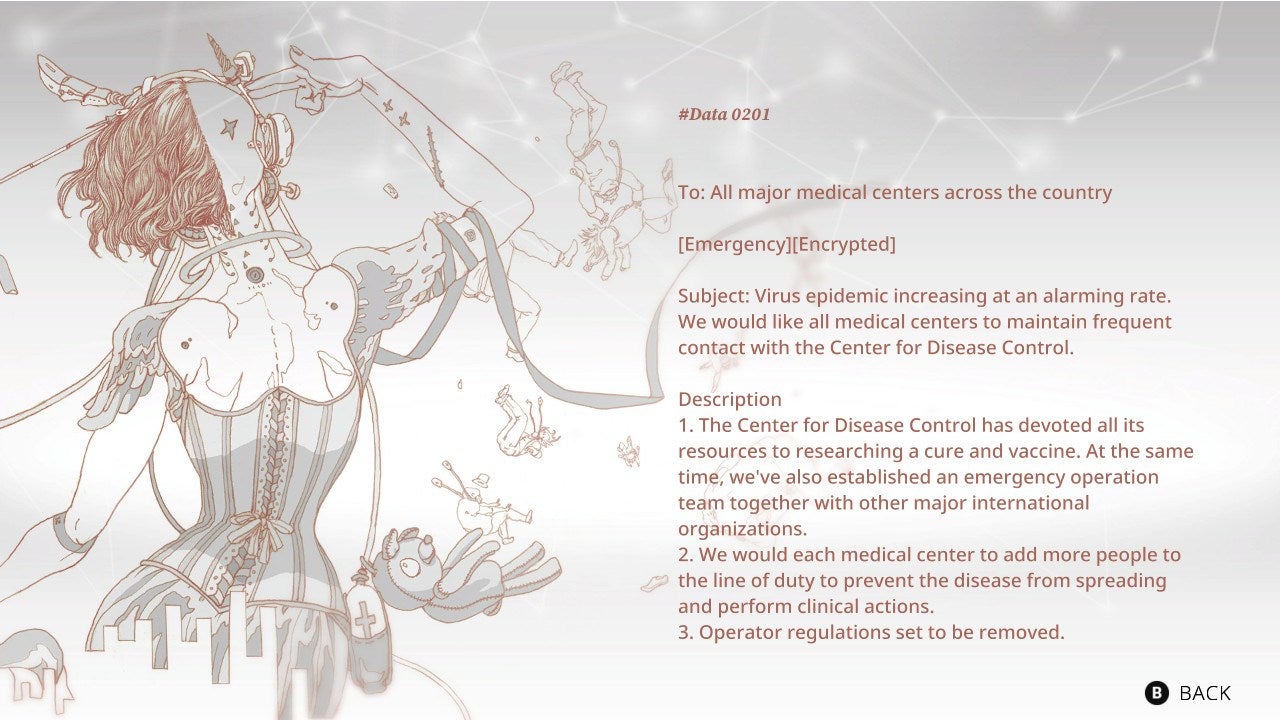 What makes the Switch version of Cytus so good is that, for the first time, I can play it on my television. Sure, in the past I could have screen-shared from my iPad to my television, but my face would still have been focused on the smaller screen. The button controls on the Switch free me to watch the notes pop up on a much larger display.

There is a downside to the button controls, though. Drag notes become much simpler and less interesting. In touchscreen mode, drag notes require players to make a tracing motion as the Active Scan Line passes over them. In button mode, all a player has to do is hold down a shoulder button while the line passes these notes.

It’s that way for regular taps as well. Instead of hitting a specific spot on the screen, players just have to hit a button in time. It’s a little easier, but I prefer the complexity of the touch screen system. Plus, the game notes “Controller” on the final score splash screen, so we can always tell who’s putting in the extra effort. 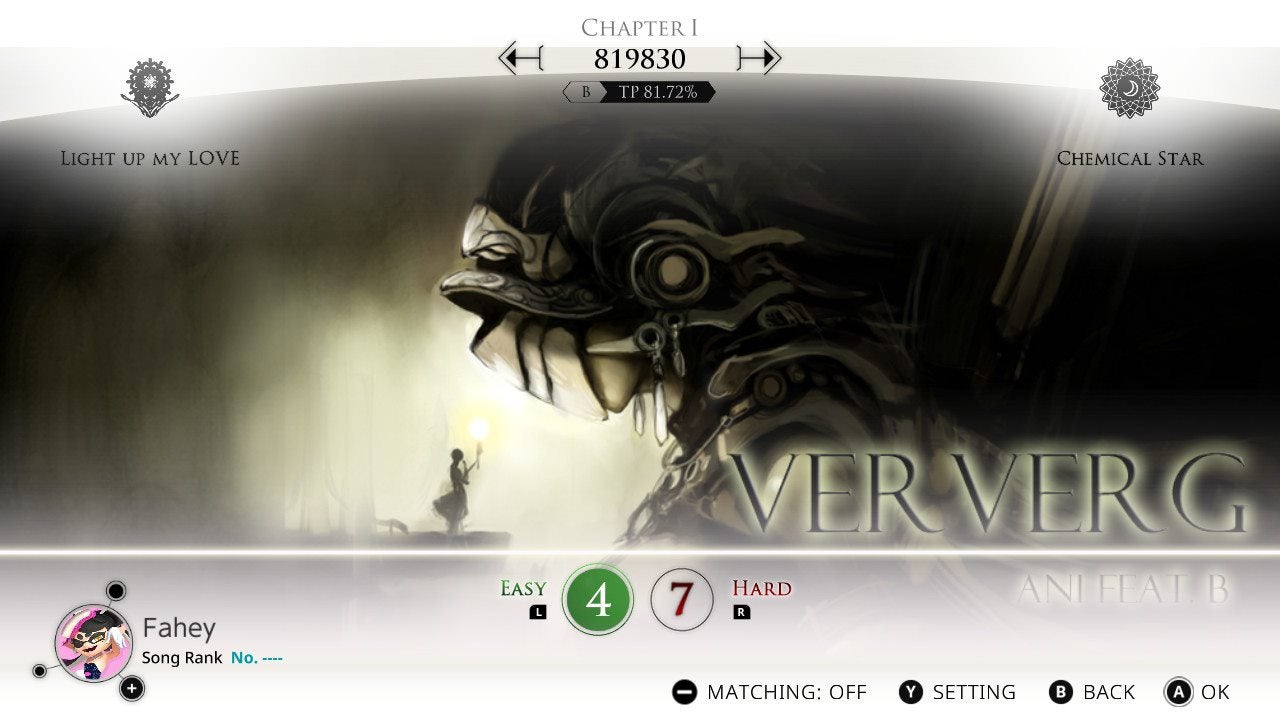 Cytus also has secrets. Tap the candle on this screen to play an alternate version of this song.

Cytus Alpha is an excellent addition to the Switch’s growing lineup of rhythm games. Between Rayark’s ports and other PM Studios [published fare like Musynx and Superbeat: Xonic, the Switch is taking the PlayStation Vita’s place as the go-to rhythm game console. Now bring on Cytus 2.