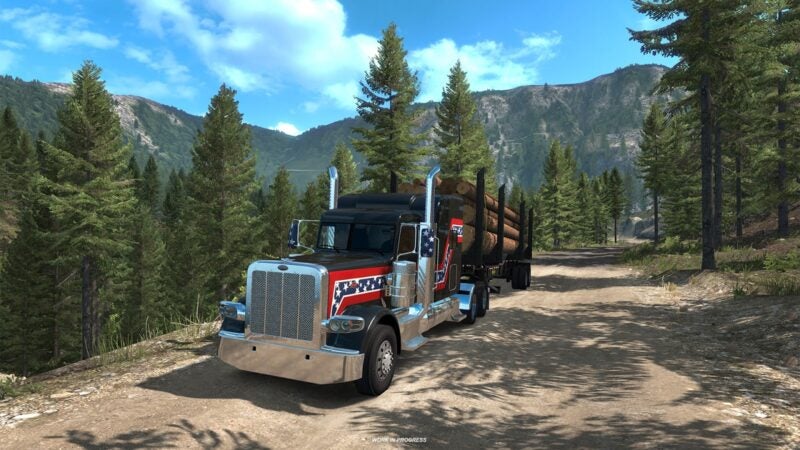 It’s the most video games time of the year, with every developer and their (voice actor’s) dog showing off glamorous new games powered by multi-million dollar marketing budgets. In many cases, this has involved unfurling elaborate pre-order campaigns to coincide with upcoming releases.

But despite the surefire sales success of games like Cyberpunk 2077 and Doom Eternal, they’re currently unable to climb higher on Steam’s top-sellers list than some new American Truck Simulator DLC.

Both American Truck Simulator and Euro Truck Simulator, while humble in fidelity by triple-A video game standards, are quiet behemoths. The relaxing, meticulously detailed nature-admiration (and driving) games are fixtures in Steam’s most-played games list, so it makes sense that a new expansion would make waves.

Today, American Truck Simulator: Washington, a $16.95 DLC pack that adds 6,116km of “dense road network” and 16 new cities, came out and rocketed to number one on Steam’s list of top sellers.

It’s facing stiff competition in the form of recently opened pre-orders for Cyberpunk 2077 and Doom Eternal (for which there’s currently a colossal banner ad at the top of Steam), as well as E3-related deals on the Borderlands series, but it just keeps on trucking. For a time, it held tightly onto the number one slot.

“I CAN’T BREATHE WE ARE FIRST, WE ARE SELLING BETTER THAN CYBERPUNK AAAAAAAAAAAAAA,” wrote business person and developer Tomáš Duda on Twitter. “This is the E3 weekend when no one dares to launch any games, and DLCs not announced there. LOOK. AT. THIS.”

It’s quite a stark contrast to this especially shooter-heavy E3. In one corner, you have guns, explosions, and viscera tumbling out of bellies like so much old dumpster spaghetti, and in the other, trucks serenely coasting down the road for hours on end, nature rolling in all directions ahead and behind.

The glitz and glamour of E3 might be eye-catching, but there’s simply nothing more universal than the open road. And trucks. Big, cool trucks. I mean, even the star of Cyberpunk 2077 developer CD Projekt’s previous game, Geralt of Rivia, knows that.