Death Mark Reminds Us That We Can Never Vanquish Our Ghosts 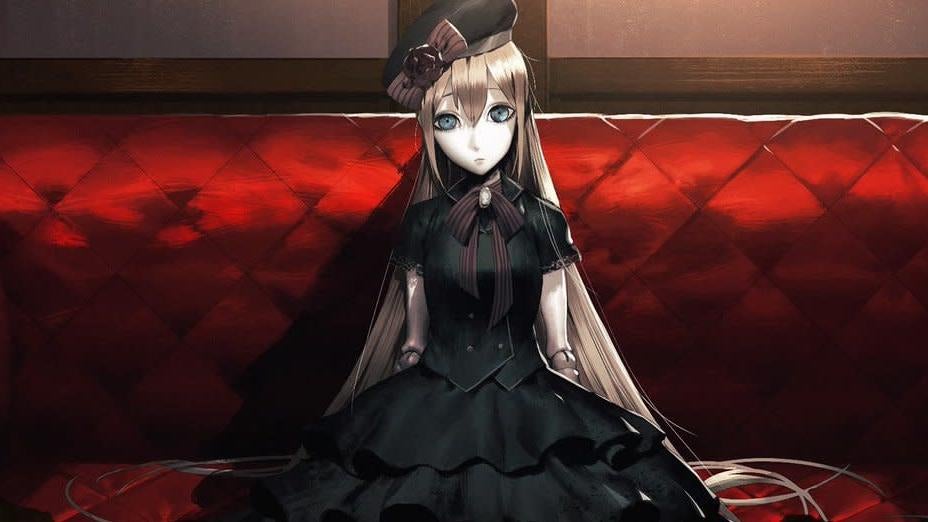 There was a time I was obsessed with American urban legends, especially the horror-themed ones. Learning more about their roots and origins, and how a story evolves over time to fit the social mores of its time was fascinating, if terrifying. Death Mark is kind of like a mix track of creepy Japanese urban legends packed into an interactive visual novel.

Bearers of the Mark

One of my favourite things to do is to go to game stores, scour the used section for titles I’ve never heard about, and randomly pick a game to take home. Death Mark is one of them.

I haven’t played many visual novels, but Death Mark, developed by Aksys Games and available for PlayStation 4, Vita, PC, and Switch, grabbed my attention with its horror themes centered around Japanese ghost stories.

A fatal curse is inflicting people in Tokyo’s H City, giving them a crimson bite mark that results in their amnesia and eventual death. A group of strangers gathers at the mansion of Saya Kujou, a spiritual medium who was researching the curse, to try to figure out what’s going on.

Unfortunately, you find her corpse soon after you arrive, and your only guide is a talking doll named Mary. Death Mark plays out like a mystery series divided into five chapters, where new characters arrive at the mansion and collectively try to figure out which ghost gave them the mark and why. 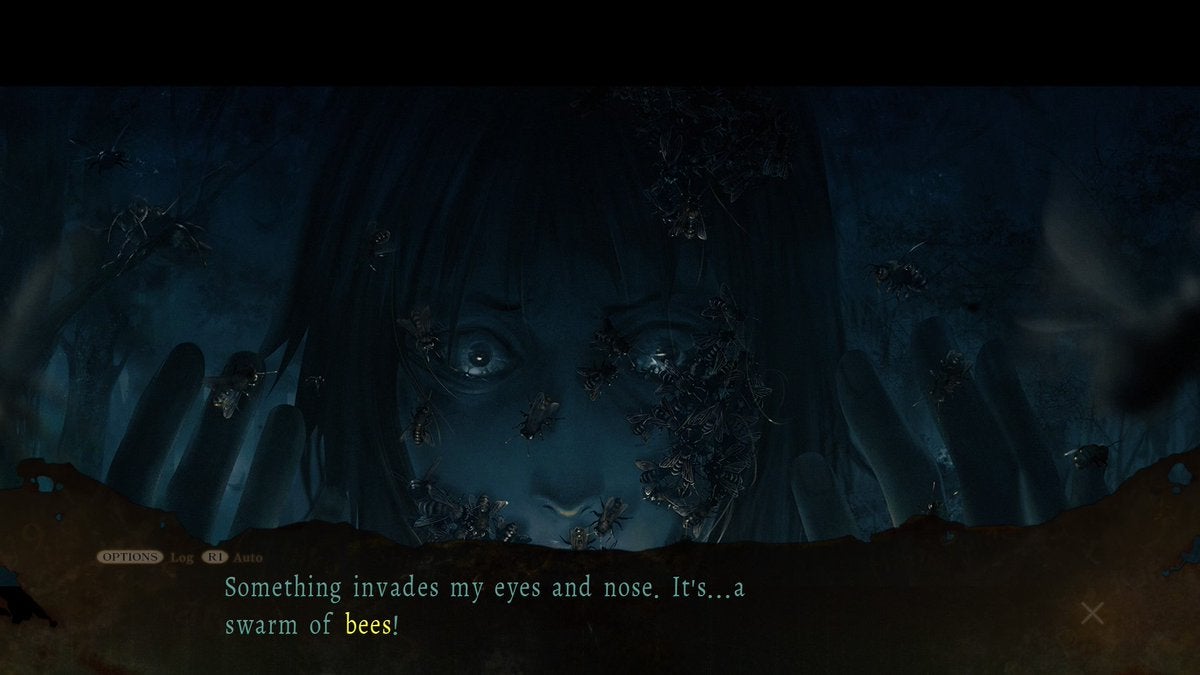 Death Mark is at its best when it focuses on the monstrous tragedies of each of the ghosts. It excels in psychological horror that exposes the truths behind each person’s bloody past.

In the second chapter, your party learns that a freakish cult leader, Shimi-O, led all of his members to commit mass suicide, though he himself refrained from joining them in death.

Cursed to inhabit the H Castle Forest as a ghoulish spirit, Shimi-O drills holes into his victims and fills them with bees, which is one of the strangest forms of murder in the game.

It’s a metaphor for how a cult works—making obedient bees of all their members through force and puncturing their resistance. It’s all the more eerie considering it’s honey and blood mixed together inside the corpses. The imagery throughout the forest reinforces the sense of doom and hopelessness the cult members must have felt, lost in the dense shrubbery. 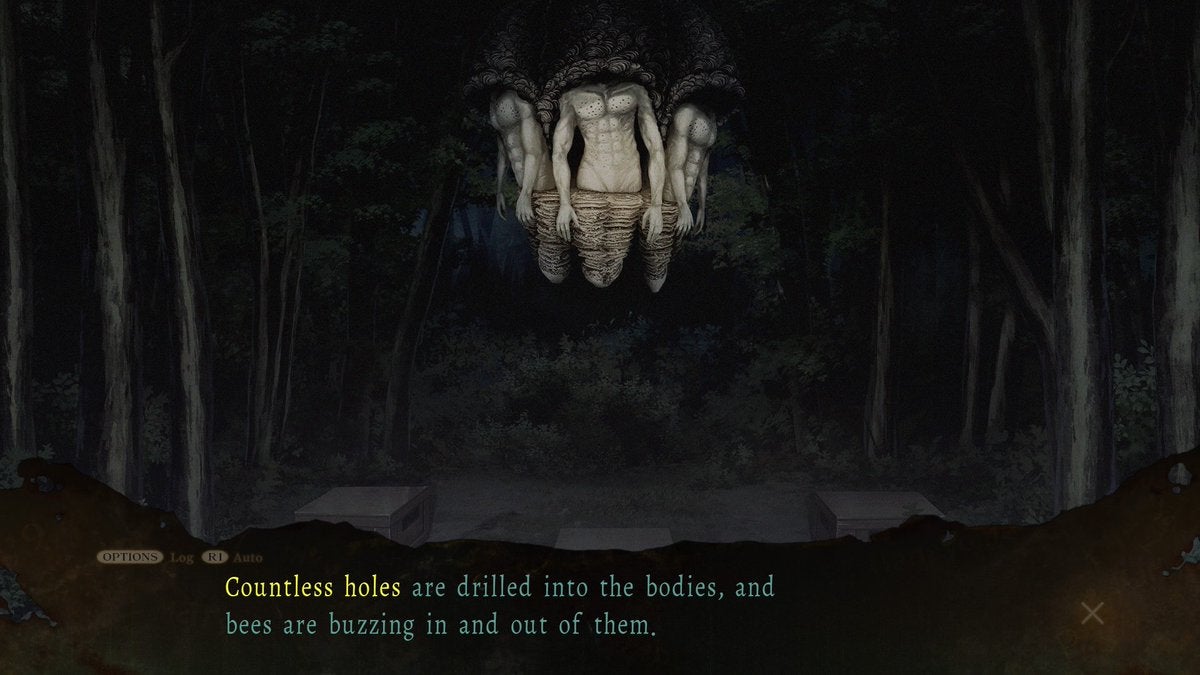 What makes this chapter extra creepy is that H Castle Forest is inspired by an actual place in Japan, Aokigahara, also called the Sea of Trees. It’s known for being home to Japanese spirits (yurei) because so many people commit suicide there. That mix of truth and fiction makes for an eerie concoction.

There, I heard the story of a ghost who would show up every morning at 3 a.m. in the bathroom mirror and kill whoever happened to be in her sight. (I’m getting chills just writing this.) I remember a few times waking up right at 3am, and even though it wasn’t school, but my own home, I was too scared to get out of bed. 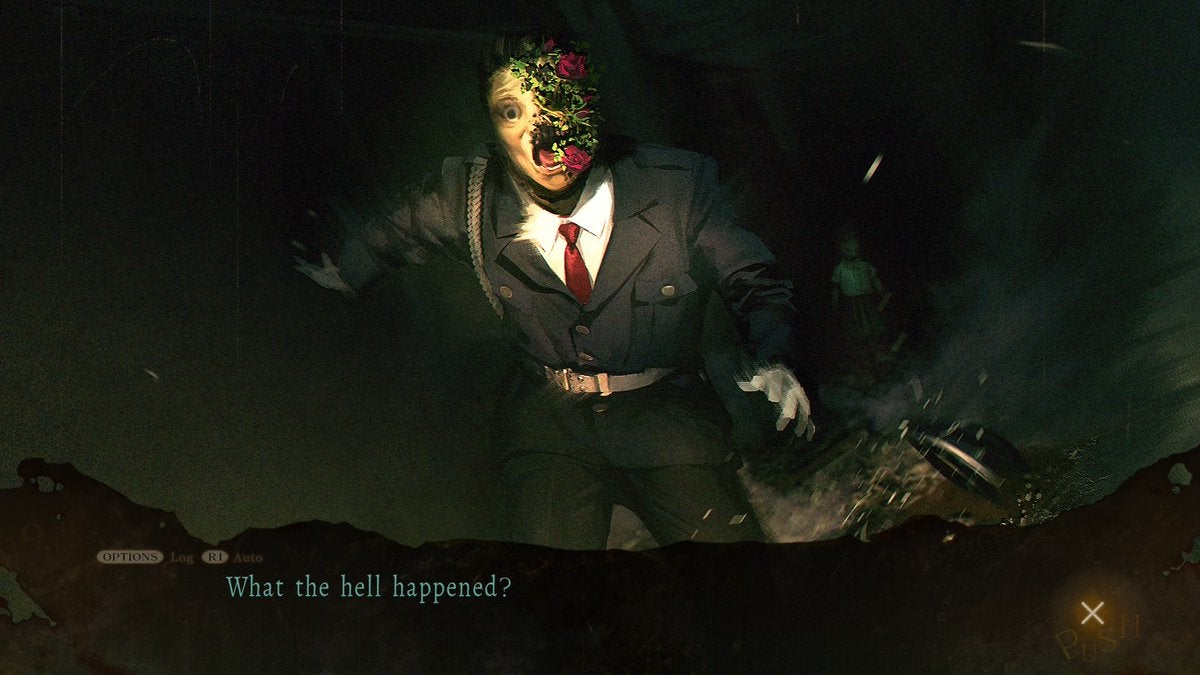 Investigating Hanahiko-kun was chilling, both for the tense atmosphere in the game and the way it reminded me of my childhood. Hanahiko died after being excessively abused.

He haunts a mirror and the plant-like infestation that mars Hanahiko’s victims is disturbing. But so was finding out the circumstances under which Hanahiko was killed while searching through the dark ruins of H School.

Each of the stories is painfully depressing. Some of the story revelations were so brutal, I felt visceral sickness. While your investigation focuses on exposing the cruelties that each of the victims endured, you also learn more about the mark bearers, like the snarky ex-detective Mashita Satoru or the cheery idol singer Kashiwagi Ai.

At the same time, with death looming over them and their memories slowly fading, a sense of alienation and frustration keeps the mood anxious and strange.

The mix of visual novel and point-and-click adventure mechanics increases the interactive elements. I appreciated the slow pace of the game, the building of tension, the methodical pacing that flies in the face of the immediate thrills that so many survival horror games rely on. It’s a tense investigation that pays off, for the most part. 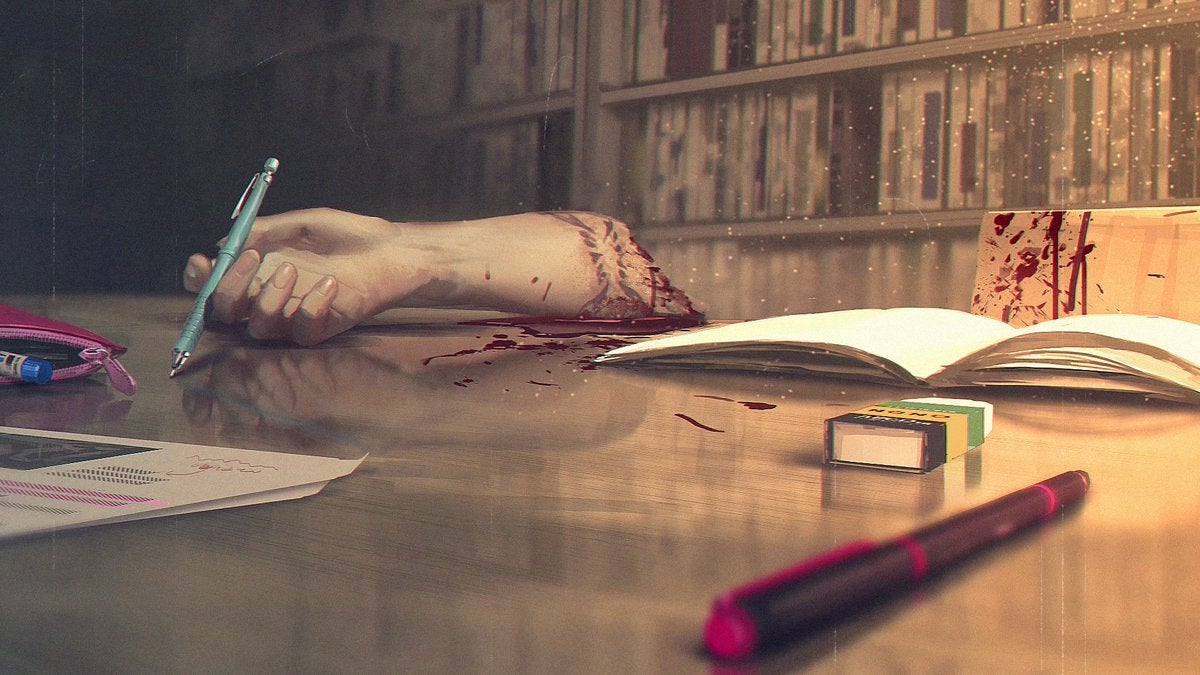 Death Mark relies on lots and lots of text, so be prepared to read quite a bit. Fortunately, the game has a superb translation with noirish underpinnings that helps convey the oppressive mood.

The frankness with which the narrator faces his fears always centres the story on the emotional impact the events are having on the characters. Even car drives from one destination to another feel less like a reprieve and more like confusing ruminations that raised my anxiety levels.

The interactive elements get deadly in the “Live or Die” sequences, where players have to choose the right selection or be killed. Since you can start them over pretty quickly and the answers are straightforward as long as you pick up on the clues, they’re not as tense as they could be.

There’s also a button to skip over most dialogue and an auto-scroll so fortunately, death isn’t too serious an aggravation. Clues throughout give indications on what you should do. Some are very clever, relying on psychological markers that layer onto the story. But make enough mistakes, especially during the boss encounters, and you could permanently lose one of your party members. 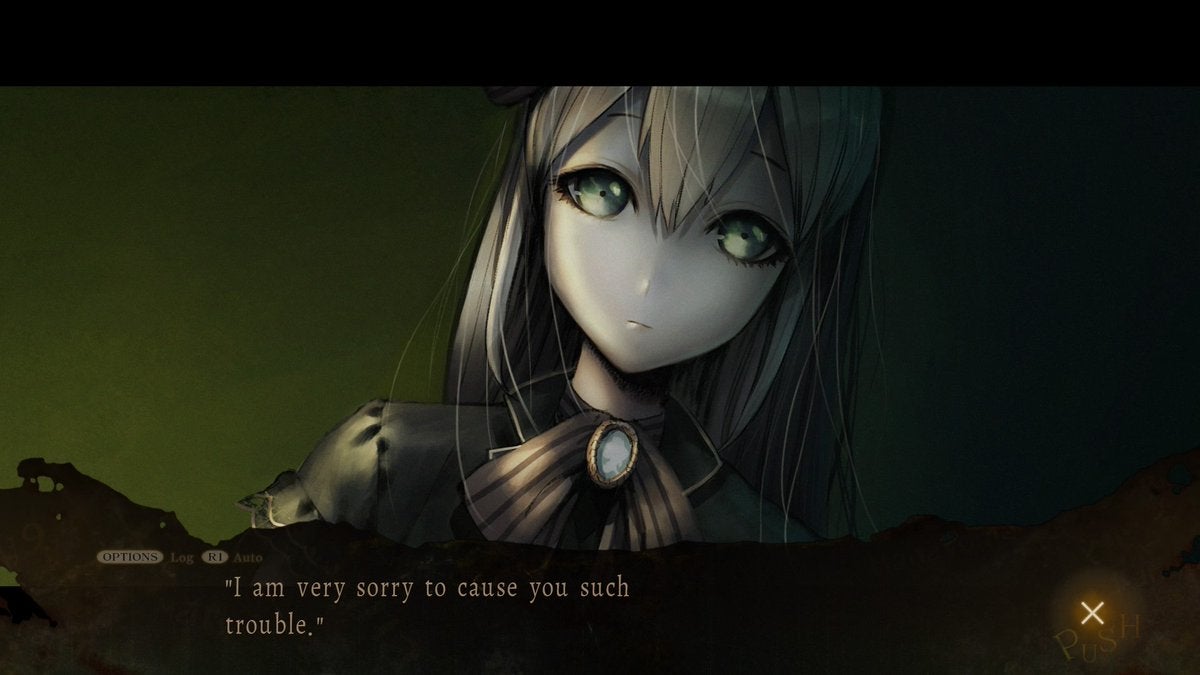 Mary, the doll you find at the beginning of the game, is your guide into the spirit realm. She gives advice and helps players uncover their forgotten pasts.

At first, the individual spirits seem unconnected. Later on, when the story tries to fuse everything into a cohesive whole, it becomes both more interesting and less dreadful, since the idea that a single entity is behind the mark lessened the impact of each ghost’s plight.

But your personal connections to the mark and the family curse brings into focus a legacy that’s intertwined with violence and sorrow. Regaining your memories only amplifies the horror. Ignorance, while far from bliss, at least lessened the burden of the mark.

In the fifth chapter, soldiers are experimenting on humans in an underground lab and trying to call on supernatural forces to help them win the war. The scientists take the statues of Buddhas and put decapitated human heads on top of the bodies.

The Kannon soldier is the haunted legacy of the terrible celestial project, and you actually live through the surgical process when a victim’s head is cut off using the tool of your choice. The inhumanity of what had transpired filled me with anger, and I could empathise with the ghost. 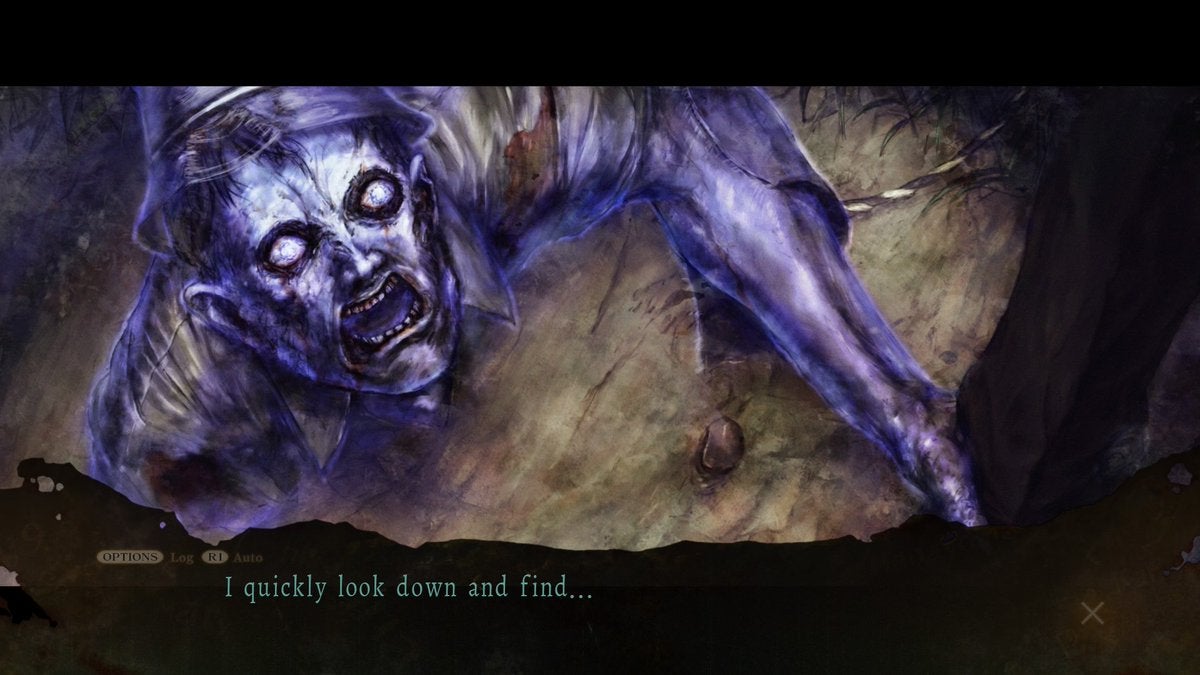 Finding out the backstory behind each of the game’s five wronged souls is the key to facing them. There’s a ritualistic cleansing involved in the confrontations at the end of each chapter. In many ways, the spirits become a testimony of the evil they endured.

They want their stories to be known, even if it’s expressed through outraged murder. Your battle with each of the spirits is a symbolic redemption to help them find peace, or at least oblivion. These play out almost like RPG battles where you and a companion use items, and in some cases even carry out combos, to damage them.

While the character art is fantastic and the music is blood curdling, the environments can get repetitive, especially in later chapters when you revisit sites to which you’ve already been.

Death Mark also earns its M rating with graphic depictions of death that sometimes veer into lecherous fanservice. It unfortunately clashes with the atmosphere the developers create throughout the majority of the game, where it goes from dusky and decrepit environments, to sudden imagery that verges on hentai-style exploitation, which are all the more jarring because of how out of place they seem.

The graphics for the ghosts in the final battles also look a bit hokey and take away from the terror of the sequences. The spirits are most scary when they’re hidden, and appear in sporadic flashes. Your imagination fills in the blank spaces with something much scarier than the actual art. 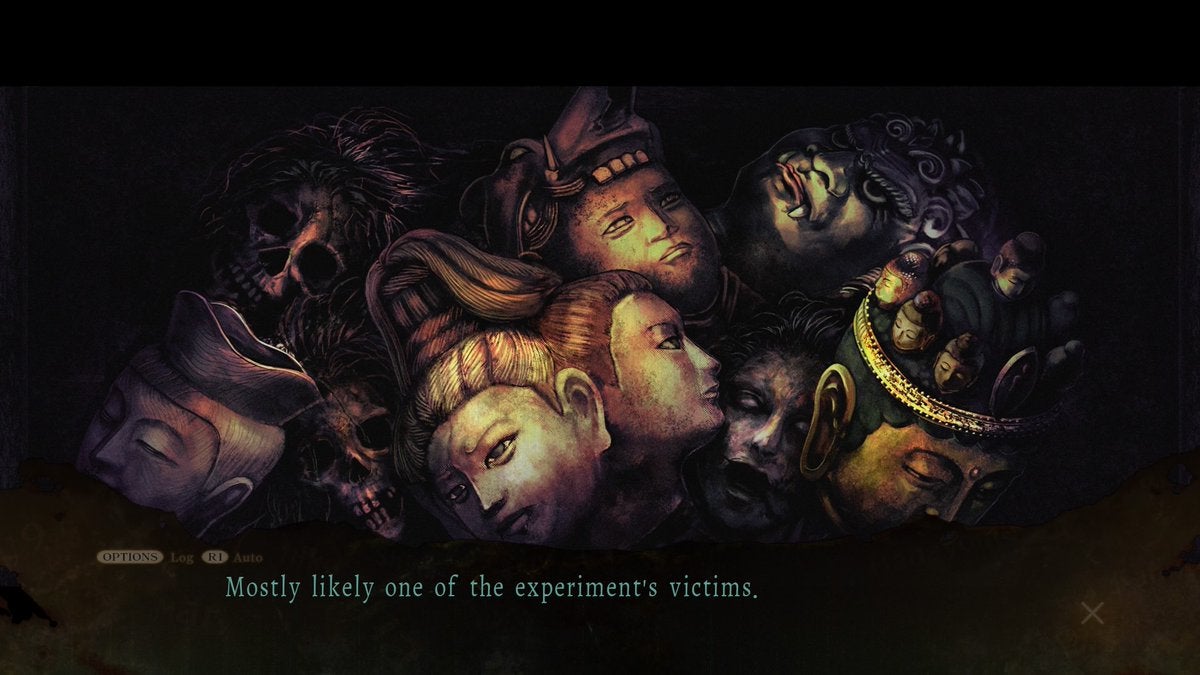 To this day, I don’t know what to make of ghosts. I can’t deny they’re possible, and too many people I know have claimed to have seen actual ghosts for me to be able to dismiss the notion (fellow Kotaku freelancer Narelle Ho Sang has told me an extremely creepy ghost story that I now regret remembering in the middle of the night.)

The ending of Death Mark implies that the curse never be fully vanquished—only delayed. It’s my fascination with the supernatural, and what lies beyond life, that makes horror stories like Death Mark so compelling.