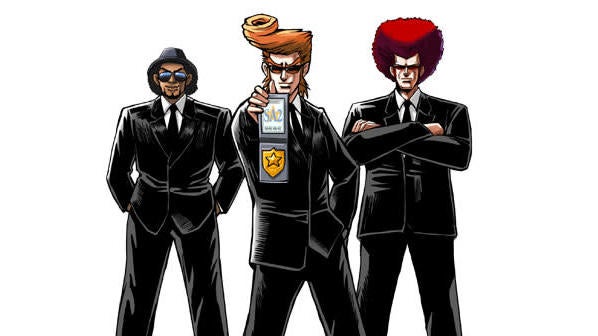 The world is in ruin, relationships are in tatters, and dreams are being crushed. How to help all these people? According to Elite Beat Agents, it’s through the power of love – er, music.

Released in 2006 for the Nintendo DS and developed by iNiS, Elite Beat Agents is a wacky rhythm game revolving around a quirky cast of characters, all of whom need help.

Timing is key when the music starts as you hit the markers right as the diminishing halos coincide with the numbered circles (a mechanic that reminded me of Lost Odyssey’s aim ring system).

Phrase markers add rolling action to the beats, kind of like a bowling ball you have to follow with your stylus. In combination with spin markers, a storm of markers results in frenetic melody taps that ramp up with each chapter and become a maddening dash of rhythmic chaos by the time an alien invasion takes place.

Yes, an alien invasion. The stories range from the weird to weirder, and a lot of the humour comes from the over the top presentation in comic panel form.

The developers are having fun with subjects like the cultural angst of the super wealthy who have to struggle with being deserted on a tropical island or a ‘lazy heir’ who will lose his inheritance if he don’t dress up as a ninja and steal back corporate secrets that were purloined.

The latter, which is set to Jamiroquai’s ‘Canned Heat’, has a surreal sprint up a skyscraper, a door being slashed open by a samurai sword only to come across a couple having a secret affair, a hallway full of laser beams, and a stream of shurikens being tossed at security guards. 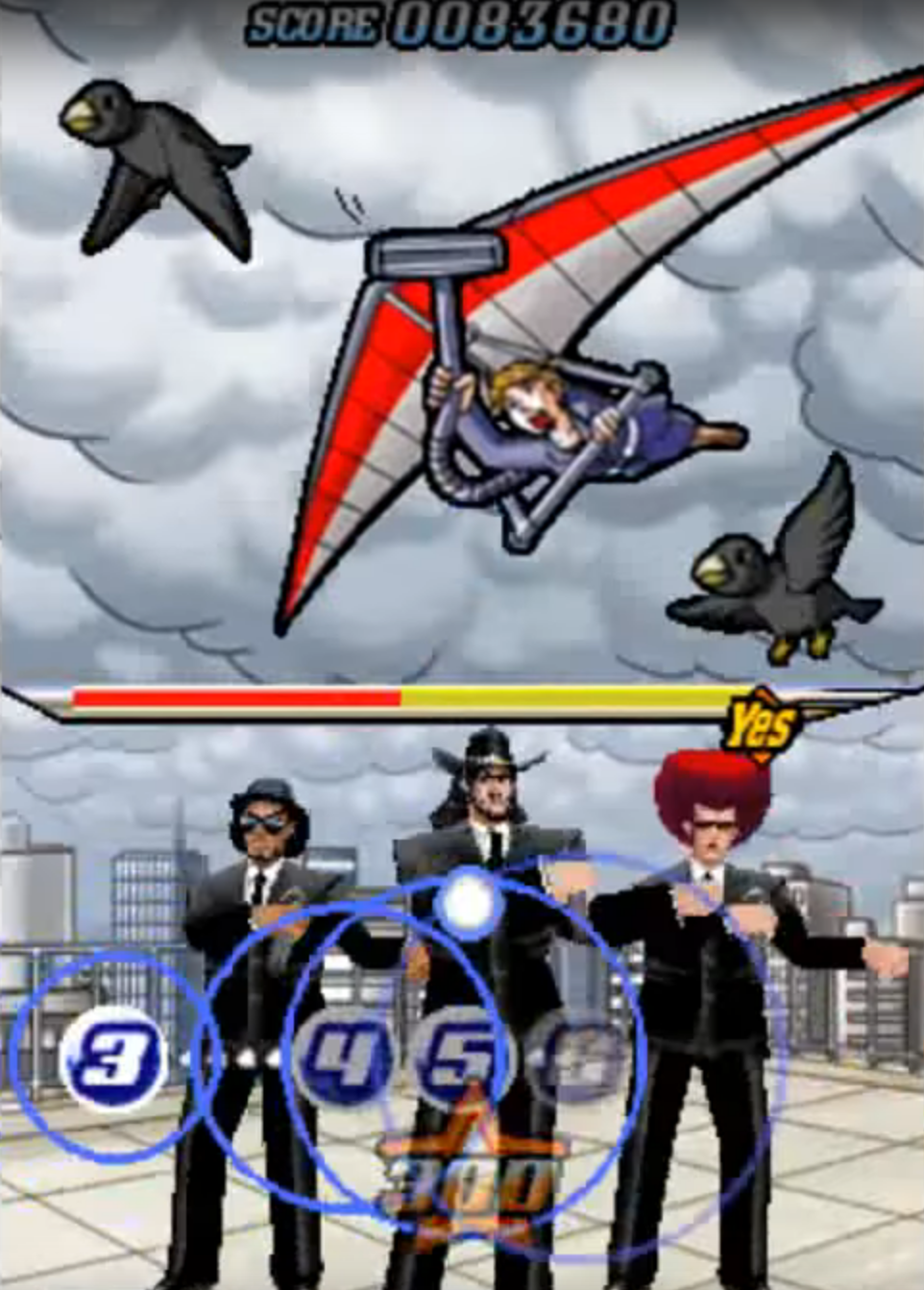 What I liked most is that the Elite Beat Agents don’t directly help the people in question. Instead, they provide inspiration and support through their dance and music. Made up of three agents named Spin, Chieftain, and J and led by Commander Kahn, the EBA travel everywhere in the world via dance, rocketpack, and blimps.

One of the most outlandish operations has the EBA help change the weather for a reporter who made up a fake forecast so she could spend a weekend with her son outdoors. She vacuums up clouds in a glider and gets help from the air force to clear the way for sunshine, all set to ‘September’ by Earth, Wind, and Fire.

A taxi ride for a pregnant woman becomes a frantic drive to the hospital as she’s about to deliver her baby. The taxi physically drives over a lake to elude a police motorcycle, descends into the subway to take a shortcut while honking at annoyed passengers and racing against a train, then drives up a building, embracing the driver’s inner Road Runner.

So when an alien force called the Rhombulans attack and outlaw music on Earth after we’ve seen how music has helped so many lives, I felt very upset. People who resist the Rhombulans are turned to stone and many are locked up in prison camps.

There is a huge difficulty spike in this final level, which consists of two parts set to Hoobastank’s ‘Without a Fight’ and the Rolling Stones’ ‘Jumpin’ Jack Flash’.

After multiple deaths, I realised my EBA skills weren’t cutting it. “Help!” I yelled, like all the individuals in the chapters until the EBA arrives, which prompted my wife to take over my DS. 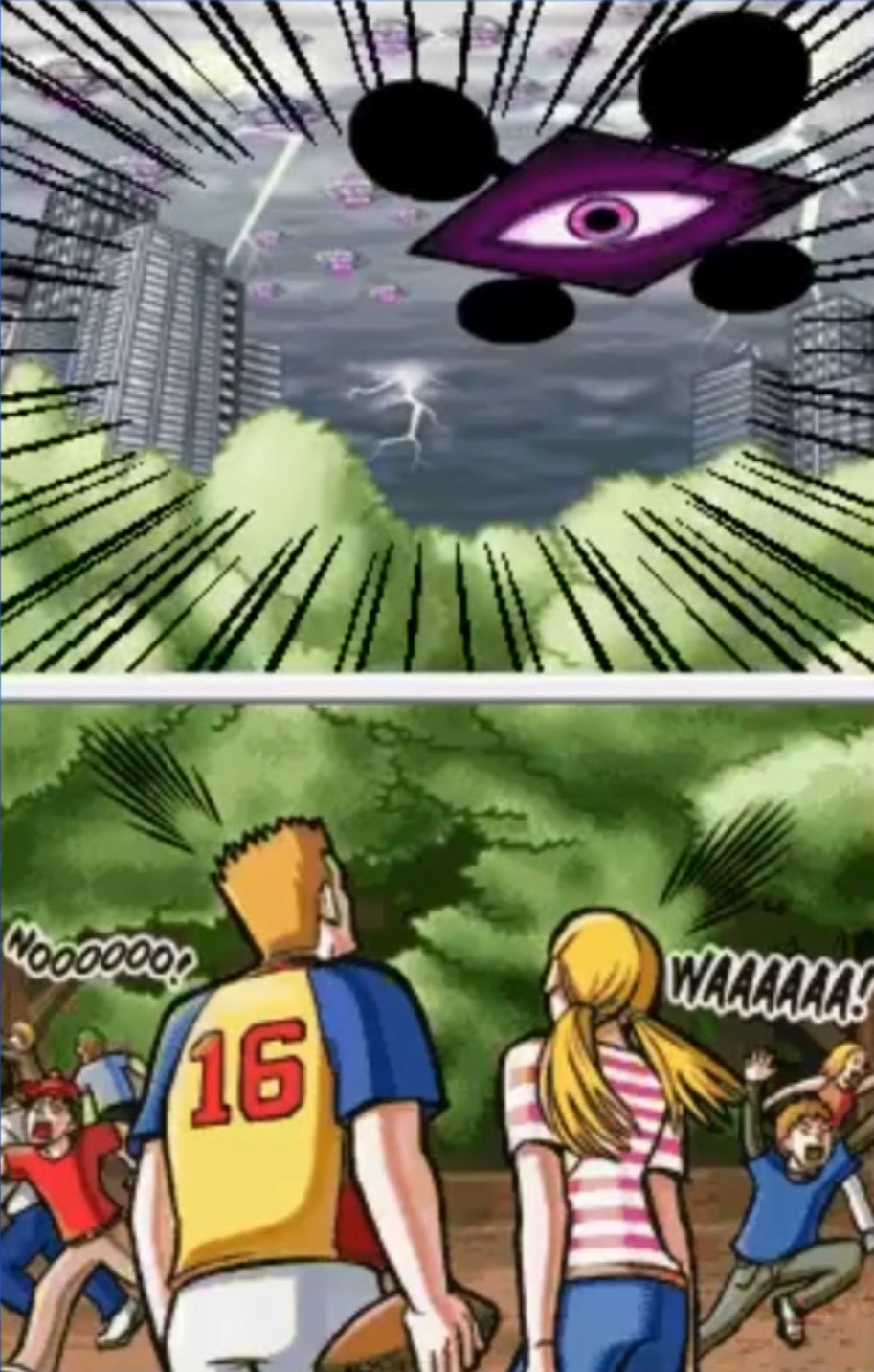 As she played, I got to thinking, what would a world without music actually be like? The chapters showcase individual struggles, then amp them to an absurd degree, showing how music helps people make sense of them.

There’ve been so many times a good song has helped me through tough times in my life, whether it’s getting a job done despite challenging circumstances (maybe not having to become a ninja), or going through a birth for the first time (even if I didn’t have to cross a lake of water to get my wife to the hospital).

Music also has the power to evoke memories.

Just this past month, I re-played Crystalis on the NES. I’d forgotten so much of the game, but the music was so familiar that as I listened, I somehow remembered some of the childhood memories associated with the JRPG.

My wife is a pro and made quick work of the Rhombulans. The Rhombulans’ attempt to quash music had been thwarted. I was grateful to my wife and the agents for making sure music continued to thrive.

As I made my way through the week, struggling with new challenges, I could have sworn I saw three Elite Beat Agents dancing just out of sight, prodding me to keep going.