Super Neptunia RPG Is Cute But Shallow, Which Is Exactly What I Wanted

While Idea Factory’s Hyperdimension Neptunia began in 2010 as a 3D turn-based role-playing game, spin-off titles have reimagined the series as a turn-based tactics game, a co-op beat-em up, a faux MMORPG and even a retro side-scrolling shooter.

The latest spin-off, Super Neptunia RPG, traps the series’ CPU goddesses in a 2D platforming realm, where a sinister villain wants to get rid of 3D games forever. What a freaking weird series this is.

The Hyperdimension Neptunia series is set in Gamindustri, which is basically the game industry as a living, breathing world. It’s ruled over by four goddesses, each representing a video game console.

Vert, also known as Green Heart, is the ruler of the country of Lastbox, representing the Xbox. Blanc/White Heart rules over Lowee, representing the Wii. The PlayStation’s country is Lastation, ruled over by Noire/Black Heart. And finally we have Neptune, AKA Purple Heart. She represents the cancelled Sega Neptune console, and she’s the goofy main character of the whole shebang.

The four goddesses were initially at odds, fighting over shares of fans in the Console War, but as the series has progressed, they have become friends, co-starring in a seemingly endless stream of spin-offs. 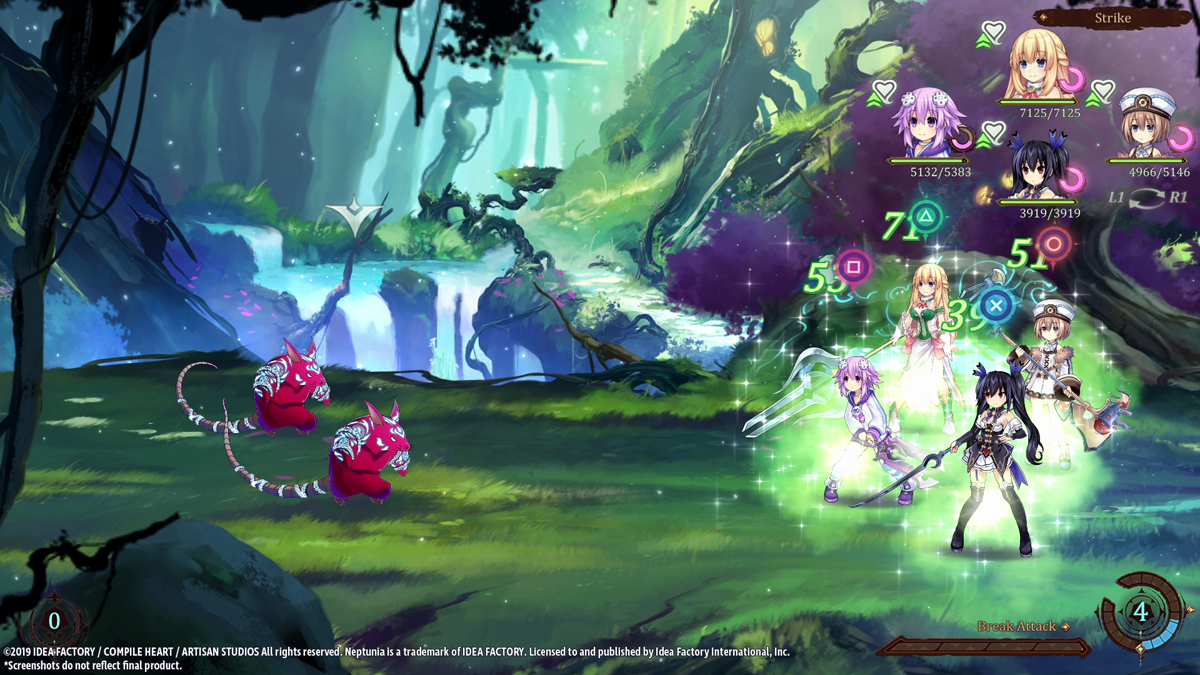 Such as this one, for instance. Super Neptunia RPG, out now on Steam and coming to the Switch and PlayStation 4 on June 28, is a very pretty mix of 2D platforming and turn-based RPG combat. Developed by Canada-based Artisan Studios, it’s the first game in the series made outside of Japan, as well as the first to launch on a Nintendo console.

The game begins with our hero Neptune (nicknamed Nep or Nep Nep) waking up in an oddly flat bed in an oddly flat town. Used to starring in 3D fare, the purple-haired protagonist is startled to discover she’s now pixels instead of polygons.

She’s also lost her memory, because the world of Hyperdimension Neptunia is one that thrives on video game tropes. In fact, after Nep joins up with the local adventurer’s guild in an effort to restore her memories, she runs into a pair of familiar faces who’ve also lost theirs. 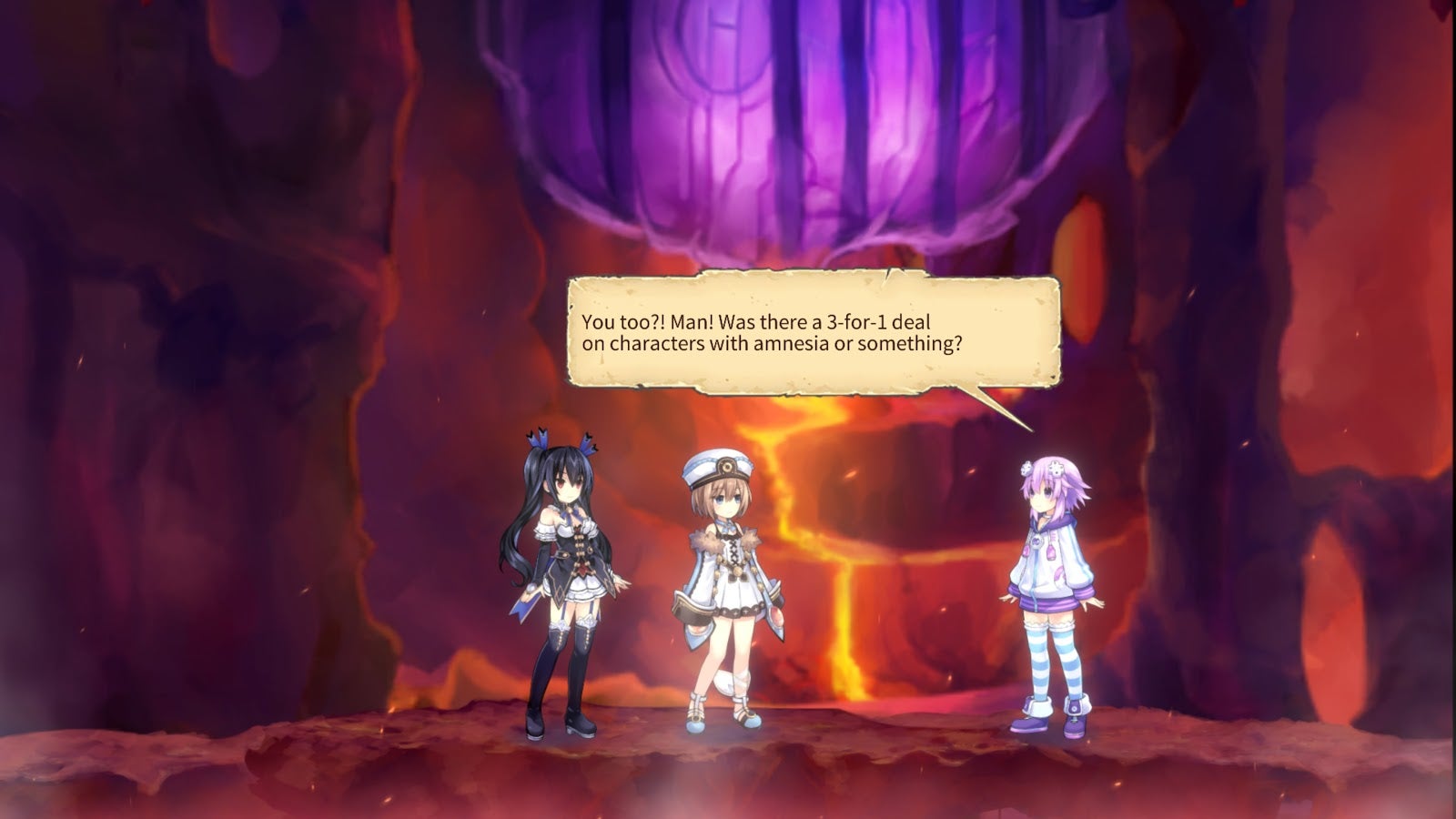 For anyone unfamiliar with the tone of the series, this screen says it all. It’s self-referential, self-aware, tongue-in-cheek anime goodness. It has a unique sense of humour. It can be a little racy, but most of the time it’s too busy being completely silly. 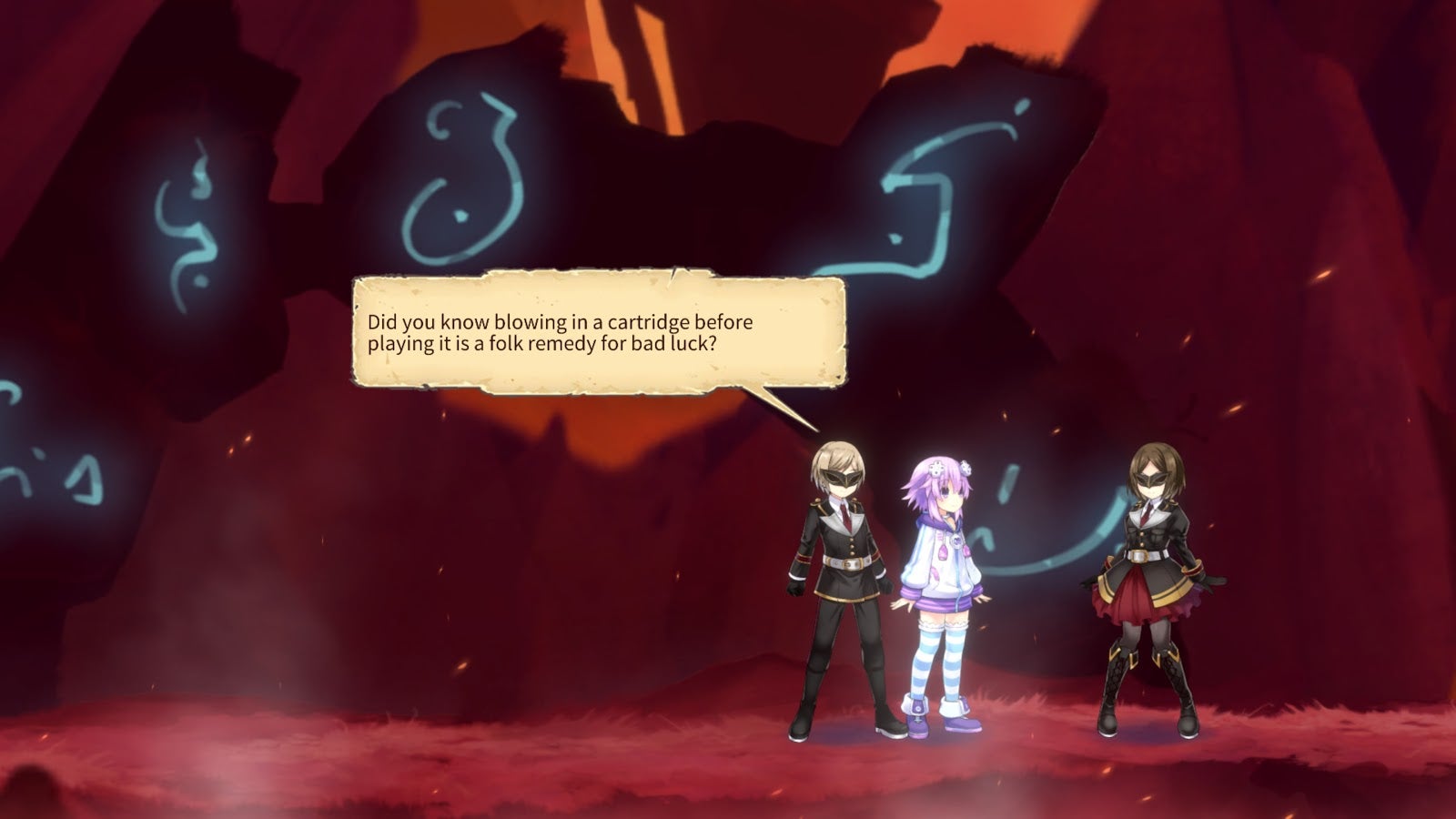 The version of Gamindustri that the console goddesses find themselves wandering in Super Neptunia RPG is flat and uninspired by design. A mysterious villain oppresses the people of the land, forcing them to crank out unoriginal video games as taxes. Seriously, they say it right here. 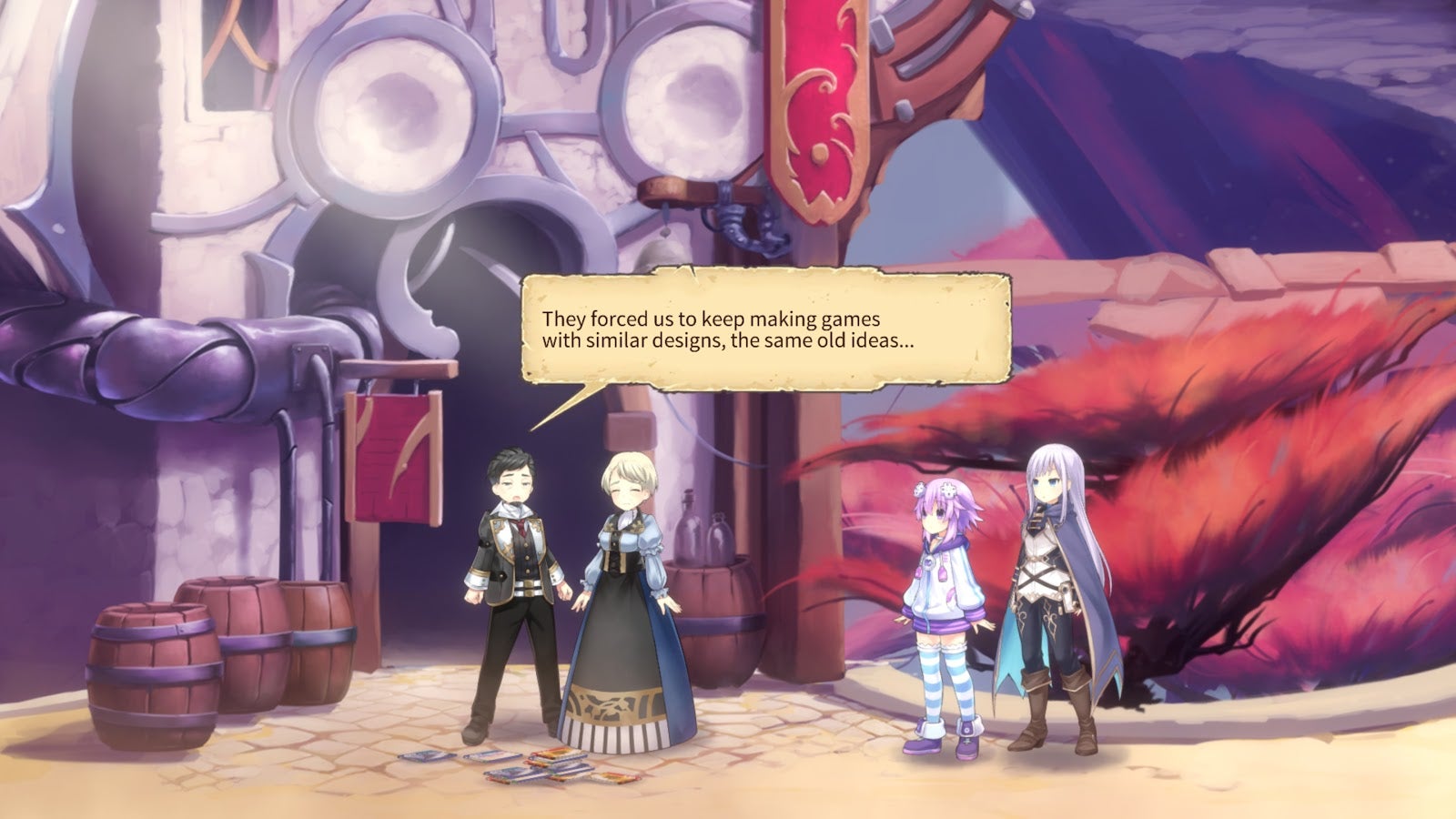 It’s up to the goddesses and their super-powered alter egos (the Hearts) to take down said villain, restore their memories and make the world safe for 3D games once more. So stupid. I love it.

Super Neptunia RPG has all the hallmarks of an old-school platform-style role-playing game. Nep hops through beautiful 2D landscapes, collecting orbs, opening chests and battling (or avoiding) wandering monsters. Her dash move helps her cover more ground, and eventually she unlocks the ability to summon a bouncy ooze creature, allowing her to reach greater heights.

There’s a ton of equipment and weapons, each unlocking new skills when equipped. There are so many side quests. There are fetch quests. Kill X number of monster quests. Give me money quests. Everybody wants something. 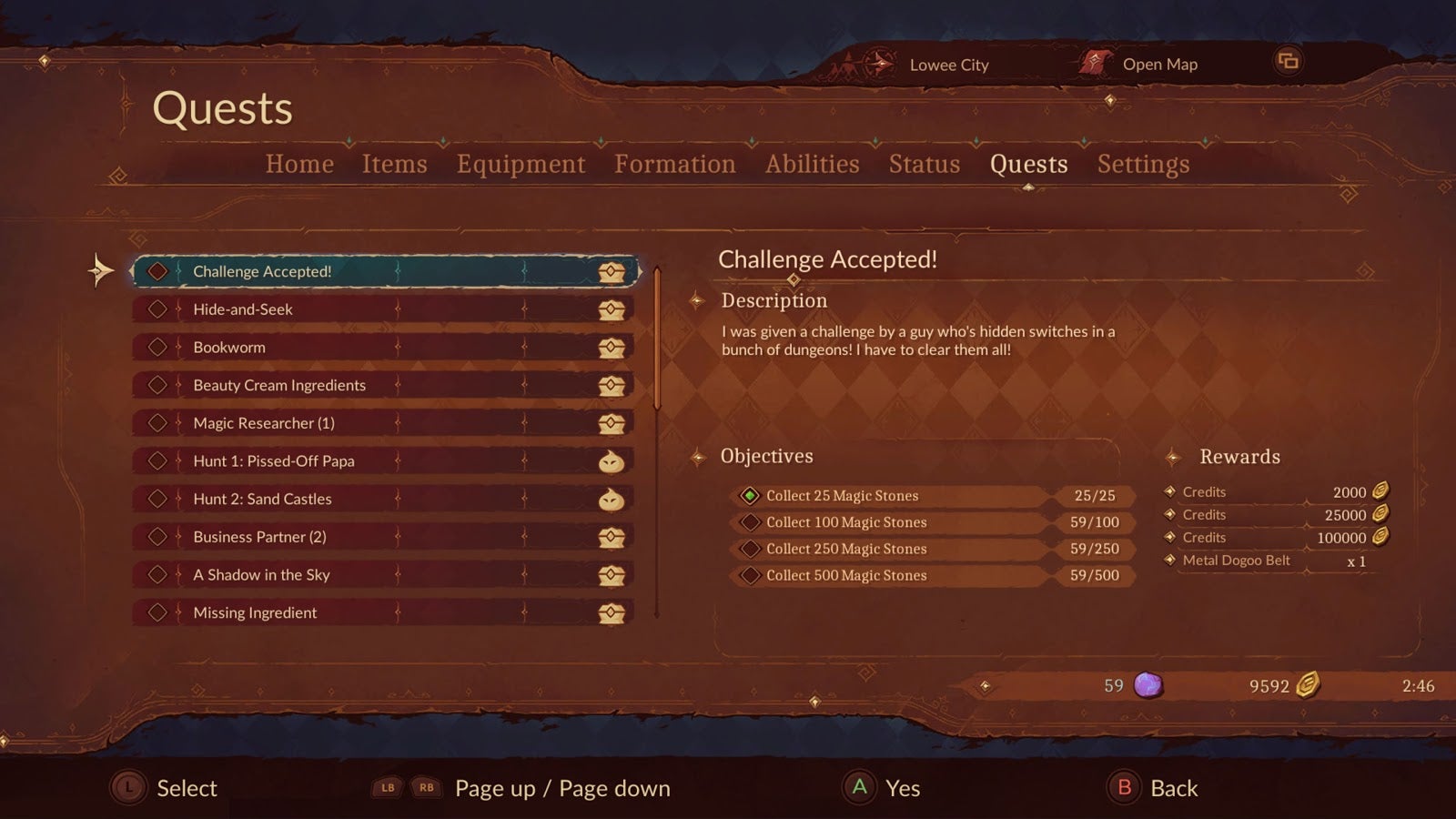 While the game looks beautiful in screenshots, in motion it’s a little bit janky. Idle animations are fine, and the characters look and move well in cutscenes. But when Nep is hopping across the scenery during gameplay, she looks like a Flash animation. Check out this recently-posted behind the scenes video with developer Artisan Studios to see what I mean.

Neptune and friends move much better once battle begins. Tapping on wandering enemies while exploring launches into a traditional-looking 2D RPG battle, with heroes on the right and baddies on the left.

The up-to-four characters making up the players’ party are assigned action buttons based on their place in the party’s formation. Performing actions requires action points, represented by a slowly filling meter in the lower right of the screen. When enough action points are available, pressing the button that corresponds to a party character causes them to act. 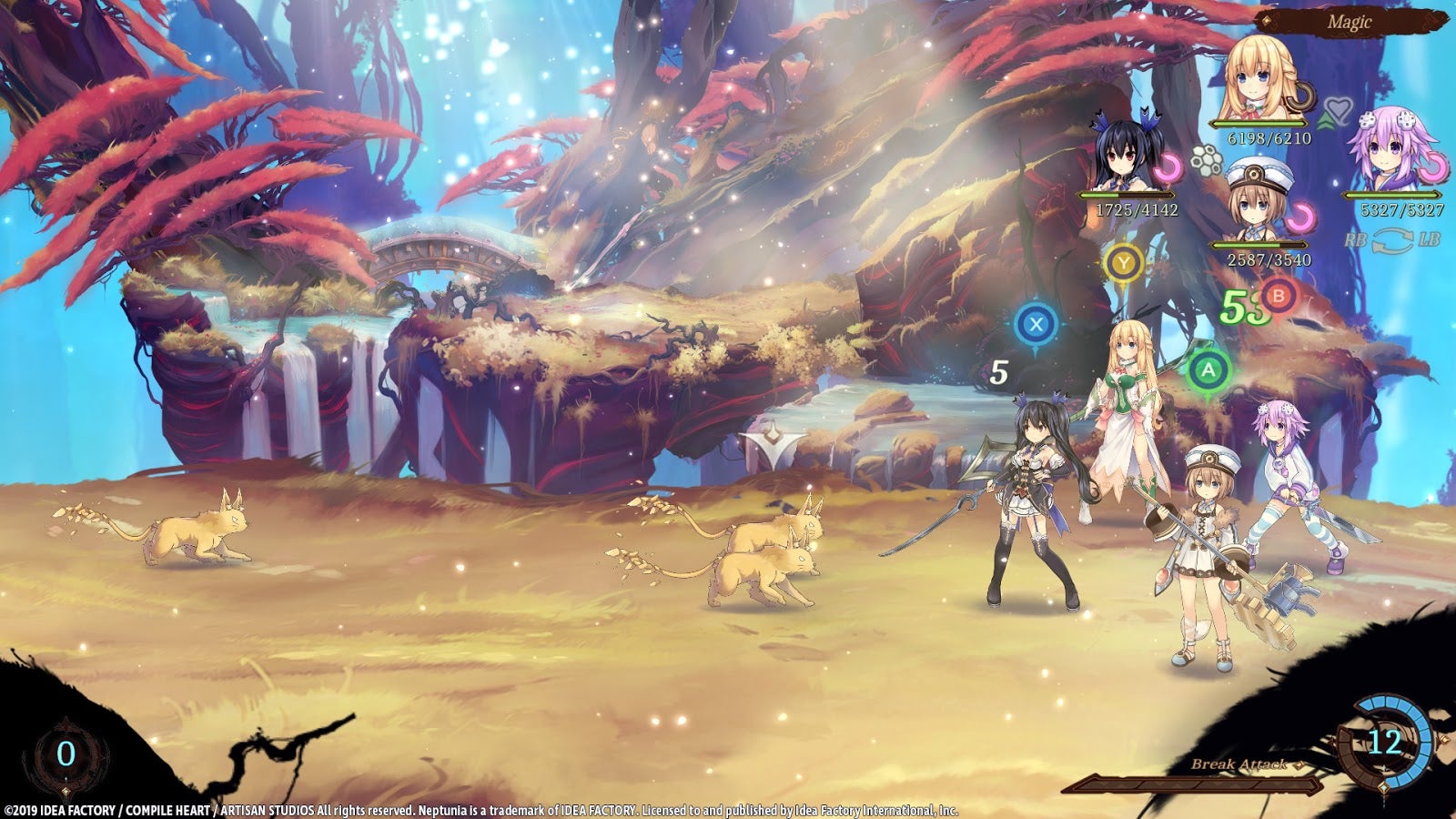 A character’s position in a formation changes which actions they perform. In the screenshot below, Blanc is in the Y position, while Neptune is in the X. In this formation, pressing Blanc’s button causes her to cast Clear, removing status ailments from the party, while Neptune does a standard attack. 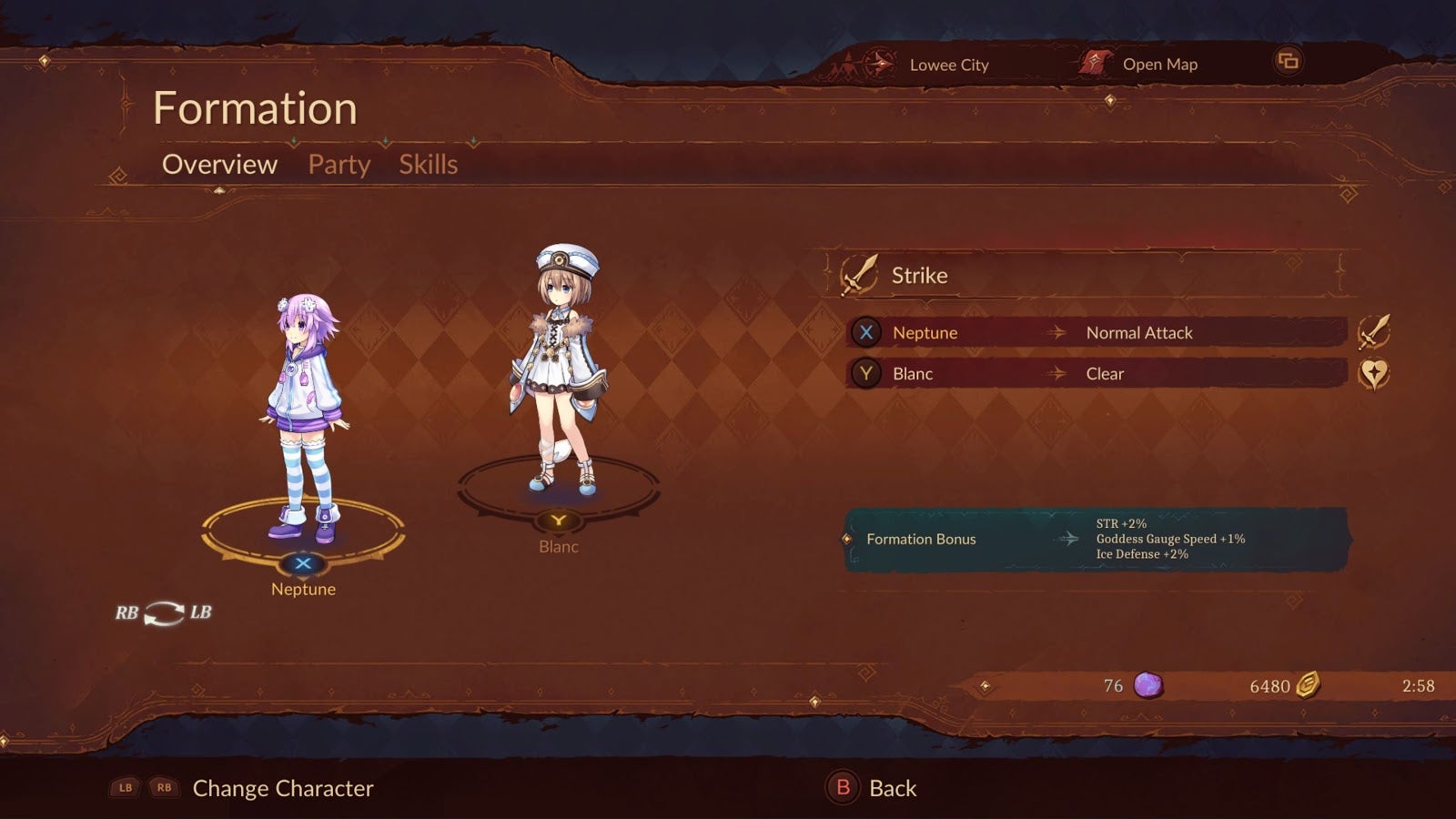 Switching places, which can be done on the fly during combat, causes Blanc’s action to change from Clear to Cure, which heals an ally’s hit points. Neptune, still relatively low level, keeps on normal attacking. 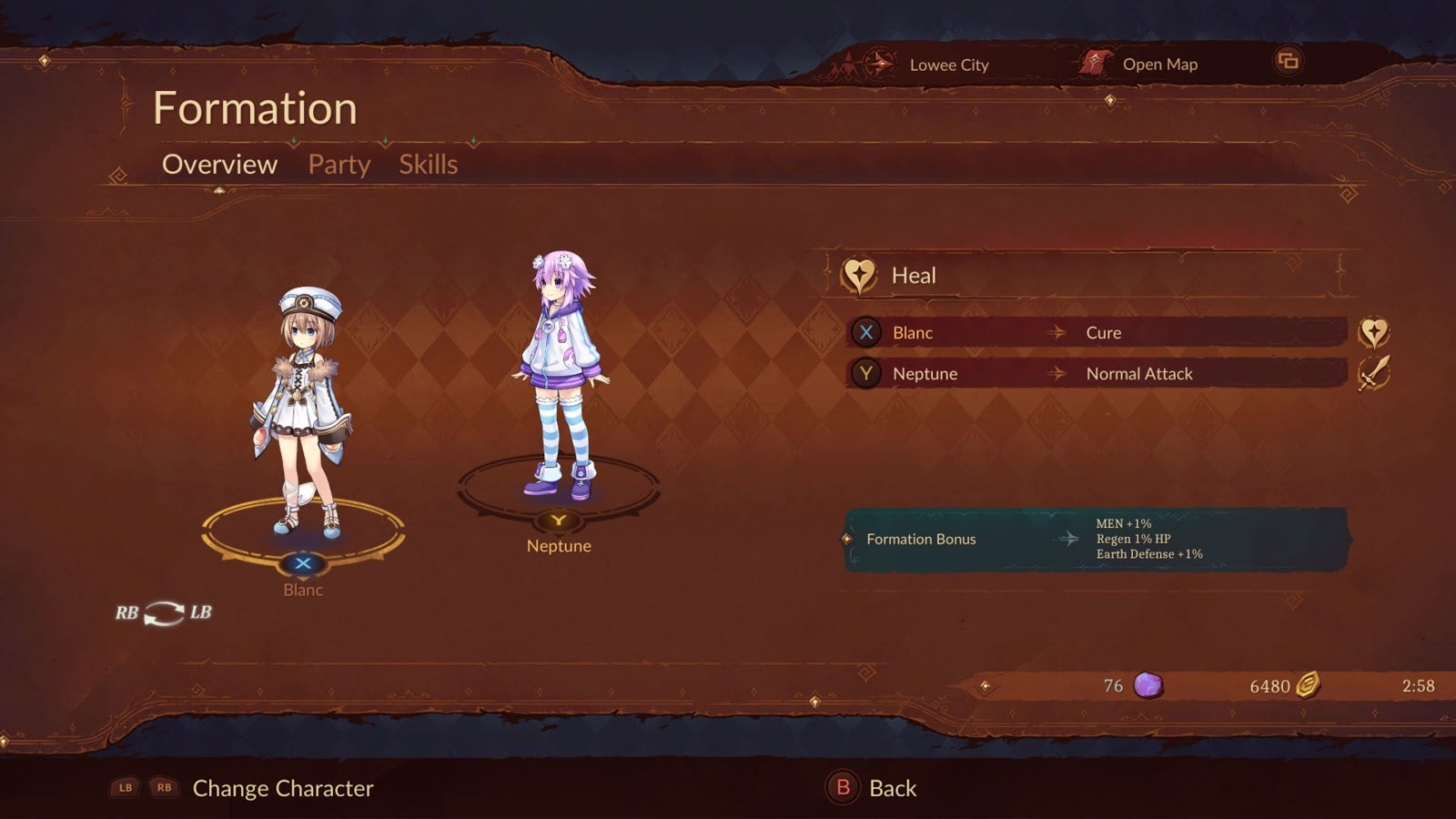 So it’s active time combat with a thrilling twist. It can get difficult to keep track of the abilities of four different characters in four different positions, but one you get the juggling act down, it’s quite cool.

I’m several hours into Super Neptunia RPG now. There isn’t a lot of depth to the story, but then there never really is in a Neptunia game. It’s all jokes and charm and video game references and pretty pictures, with a heaping helping of side quest filler. In other words, exactly what I thought it would be. I’m happy with that.