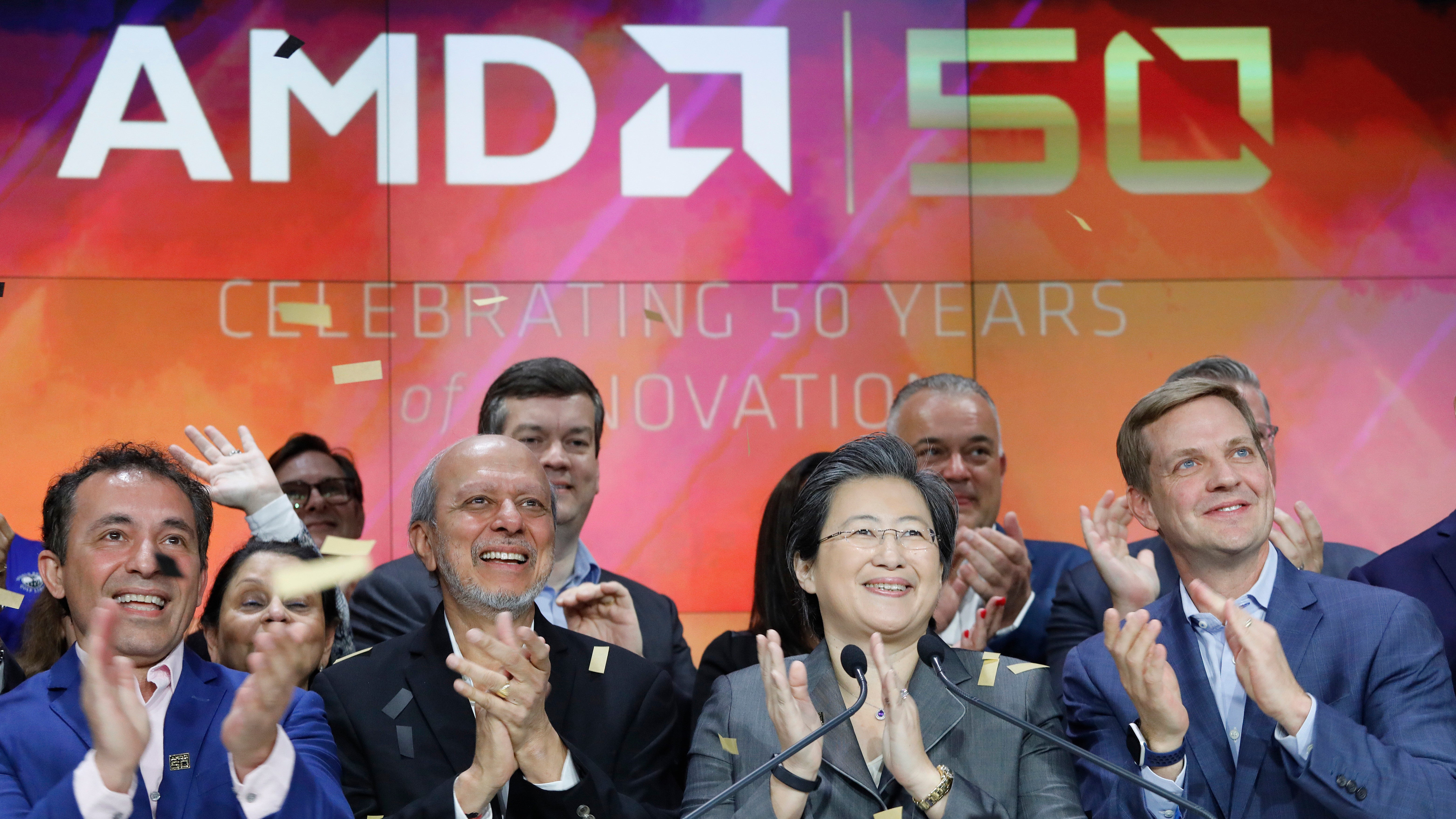 AMD CEO and president Lisa Su, second from right, attending a 50-year anniversary celebration of the company’s founding at Nasdaq in May 2019. (Photo: Mark Lennihan, AP)
Facebook may have decided that you shouldn’t see the news, but we think you deserve to be in the know with Kotaku Australia’s reporting. To sign up for our daily newsletter covering the latest news, features and reviews, head HERE. For a running feed of all our stories, follow us on Twitter HERE. Or you can bookmark the Kotaku Australia homepage to visit whenever you need a news fix.

Advanced Micro Devices (AMD) denied on Saturday the accuracy of a Wall Street Journal report that alleged its joint venture with Chinese companies gave the latter country access to advanced processor technology that could have military applications, saying that did “everything correctly and transparently” and did not violate U.S. law.

The report stated that AMD made nearly $US300 ($427) million in licensing fees and royalties from the project since its inception in 2016, while Pentagon officials concerned about its potential military ramifications tried to shut it down.

According to the Journal, current and former national security officials also said they believed AMD created a “complex structure, which involved the creation of two interlinked joint ventures, to sidestep U.S. regulations” and avoid oversight by organisations including the Treasury Department-led Committee on Foreign Investment in the U.S. (CFIUS). The paper wrote:

Current and former national-security officials said in interviews they believe AMD designed the deal’s complex structure, which involved the creation of two interlinked joint ventures, to sidestep U.S. regulations. AMD said the deal was structured for business and technological reasons and to comply with regulations, not to evade them.

AMD controls the first joint venture, which licenses the U.S. chip maker’s x86 intellectual property and manages production of the chips. The second venture, controlled by AMD’s Chinese partner, designs the devices that use the chips and sells the final products.

The arrangement enables AMD to share technology with China while retaining control over the entity working with its intellectual property. The creation of the second, China-controlled joint venture allowed the parties to claim that the resulting product was indigenously developed in China, a key goal of the Chinese government.

The Journal wrote that concern about the joint venture included a supposed risk of compromising the x86 IP or fuelling the Chinese supercomputing industry, as well as that Sugon and its affiliates had military ties.

However, in the last few years the political environment has changed dramatically to say the least, with the White House waging a trade war against China and the U.S. intelligence community increasingly agitated about what it sees as the growing technological prowess of a foreign adversary.

The U.S. Commerce Department recently added the joint venture to a so-called “entity list,” naming Sugon alongside more well-known Chinese firms like Huawei as acting “contrary to the national security or foreign policy of the United States.” That designation implemented embargoes on sales of U.S. technology to the venture, which has likely stopped it in its tracks.

In the meantime, AMD is strongly denying that anything about the partnership was less than on the level. In a statement, the company fired back at several of the claims, saying it had extensively consulted with U.S. officials and that it placed strong controls to prevent its technology from being stolen. It also stated that the technology was “of lower performance than other commercially available processors”:

The Wall Street Journal story omits important factual details, including the fact that AMD put significant protections in place to protect its intellectual property (IP) and prevent valuable IP from being misused or reverse engineered to develop future generations of processors.

AMD also wrote that its “belief is that it did everything correctly and transparently in interactions with the US Government in advance of and since forming these joint ventures.” To comply with the entity listing, the company said, it has now “restricted the sale and purchase of products and taken steps to ensure that no technology transfers occur to listed entities.”

Furthermore, the Journal story has come under scrutiny from other outlets. As Fortune noted, one of the sources for the story, retired National Security Council staffer and Brigadier General Robert Spalding, left government service after heavy criticism of his proposal to effectively nationalize parts of the telecom sector. Spalding’s intent was to build a secure 5G network that would help win the “AI arms race” against China.

Wccftech’s Usman Pirzada wrote that he had “difficult time believing the story got any technical scrutiny” and that the complicated structure of the deal seems to have masked that no actual intellectual property was exchanged.

Even in a worst-case scenario involving corporate espionage, Pirzada added, it was unlikely that Chinese engineers could reverse engineer and fabricate a new chip that would not be “multiple generations behind U.S. tech,” and that a “well placed source” told Wccftech it was “not practical” to reverse engineer the base IP.

Creative Strategies Inc. analyst Tim Bajarin also told Business Insider he was familiar with the joint venture and that AMD was “very upfront with U.S. Government officials and took extra care to follow U.S. guidelines on what could or not be included in the way of technologies from the U.S. that could be imported to China as part of this program. AMD’s comments reflect what I have known about this venture from the beginning.”