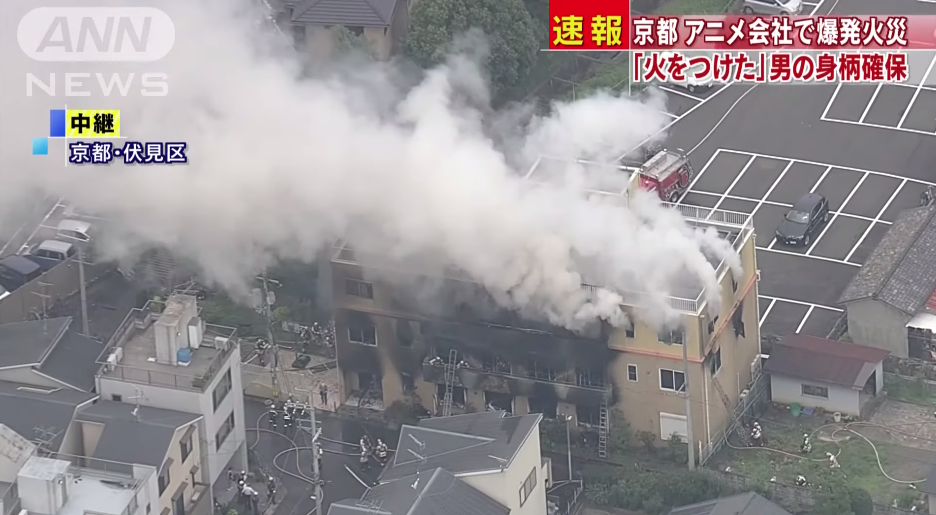 Kyoto Animation, one of Japan’s most popular anime studios, was reportedly set ablaze this morning in Japan. A man in his 40s was allegedly seen pouring a flammable liquid and setting it ablaze. He is currently in police custody.

At around 10 am, residents living near the studio called the police, saying there was the sound of an explosion and that smoke was emitting from the building, which is located in Kyoto’s Fushimi area.

Update: According to Japanese TV news, there are still people trapped in the studio and there are twenty people who are still unaccounted for.

Update 2: One witness said the suspect was screaming “die” as he lit the fire.

Update 3: The Japanese media is now reporting that seven people are confirmed dead.

Update 6: Kyoto Animation CEO Hideaki Hatta told reporters that for the past few years death threats have often been sent to the company.

[The original story continues below.]

The building is Kyoto Animation’s No. 1 Studio, NHK reports. The studio’s head office is in Uji City, Kyoto, which is about twenty minutes away by car.

Sankei News reports that 38 employees have been taken to the hospital for major and minor injuries. ANN adds that nine people are unconscious. According to Kyoto Shimbun, one person is reported dead.

Kyoto Animation is perhaps best known for anime like The Melancholy of Haruhi Suzumiya, Lucky Star, K-On! and more recently, Miss Kobayashi’s Dragon Maid and Free!, among many others.