I don’t know much about soccer, but I love how seriously its fans take it. I can’t count the number of Saturday mornings when I’ve been woken up by shouts coming from the English pub a block from my house when there’s a Premier League game.

Football Drama, coming out Thursday for PC and phones from Italian developer Open Lab Games, is a weird, unique take on soccer management simulators that captures both soccer fans’ excitement and the shadowy world that surrounds the game.

You play as Rocco Galliano, a Frenchman who’s been tapped to coach an English soccer team, Calchester Assembled, though to the finals of the Thiefa League (get it?). Rocco has a spotty past that’s followed him into his new job. Through snippets of dialogue, the player learns about his previous clashes with the soccer league’s president and the shady world that exists around the league.

You can shape Rocco, to an extent, through the dialogue options you choose. Different responses will raise your “karma” or your “kaos,” as well as affect your relationship with characters like Calchester’s owner, Rocco’s mysterious lover, the press, and Rocco’s cat.

The other half of the game is taken up by Calchester’s matches against other teams in the league. Before a match, you get the option to train a certain skill, like goalkeeping or tactics.

Then, you select up to five virtual cards that represent calls Rocco can make from the bench. You earn new cards after matches and in dialogue options. According to the developer, the cards you get are influenced by your karma or kaos. Cards can range from formations of your players to specific soccer strategies to wasting time during a match or calling fake fouls.

The most interesting aspect of the cards mechanic is that cards don’t take effect right away. Rocco shouts his orders from the bench and the players eventually act on his advice, which can either succeed or fail.

This highlights the feeling of being a coach: You’re in charge, to an extent, but you can’t actually control the action. Successful actions will affect some of the 16 “dimensions” that influence a soccer game’s moment-to-moment play, such as attack, midfield, dominance, or harmony. 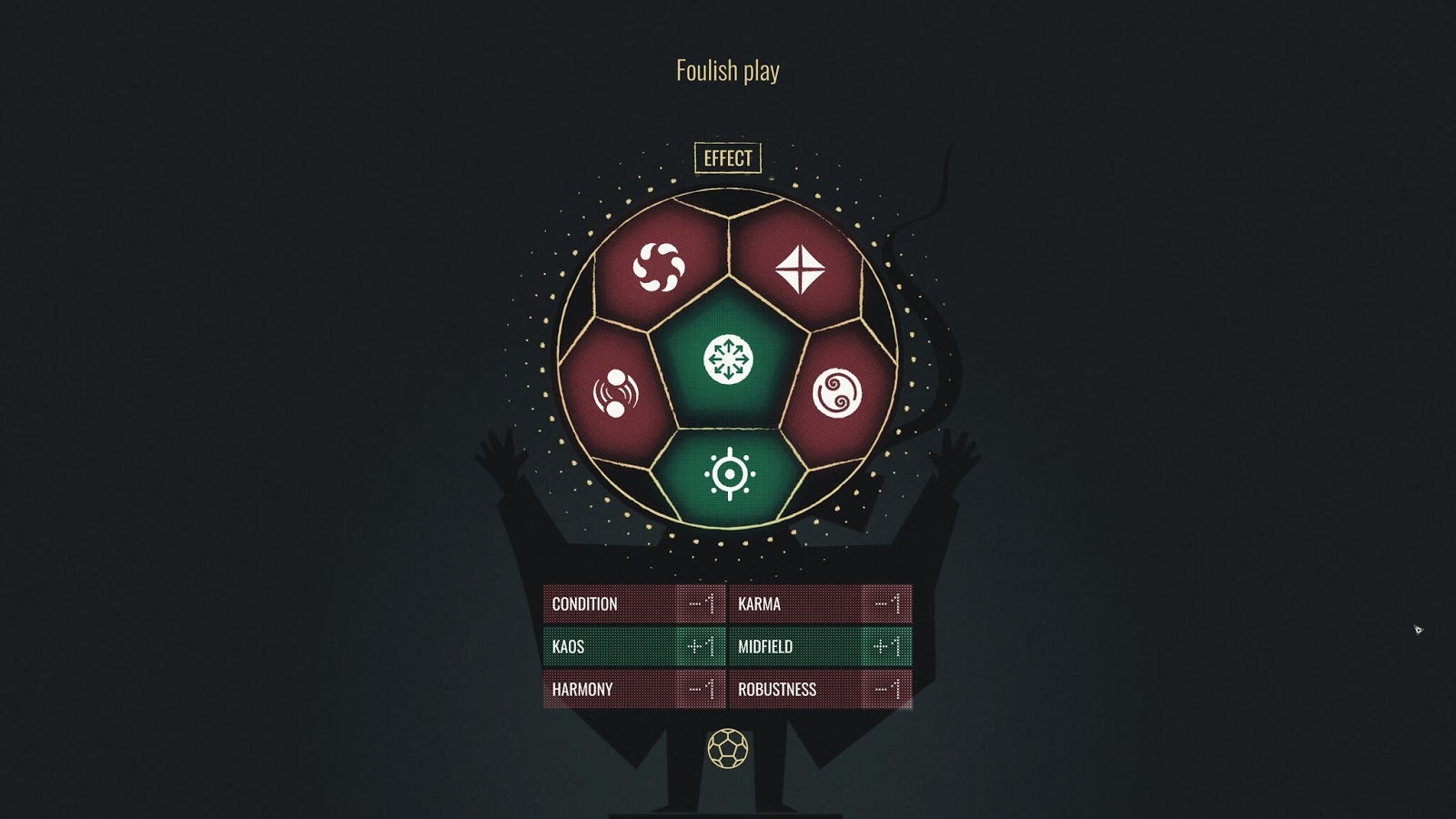 The effects of playing a card

These dimensions feel astonishingly complicated compared to the simplistic portrayal of the matches themselves. Most of the time, a match is represented by a soccer ball moving across the field.

During attempts on goal, it switches to moving coloured dots that roughly play out the action. Despite the basic graphics, I found myself engaged when my team or my opponents were shooting, even shouting “Come on!” like an excited fan. As with the cards, you can make choices, but things are ultimately out of your hands. You’re playing a video game, but you’re also watching a virtual soccer match. 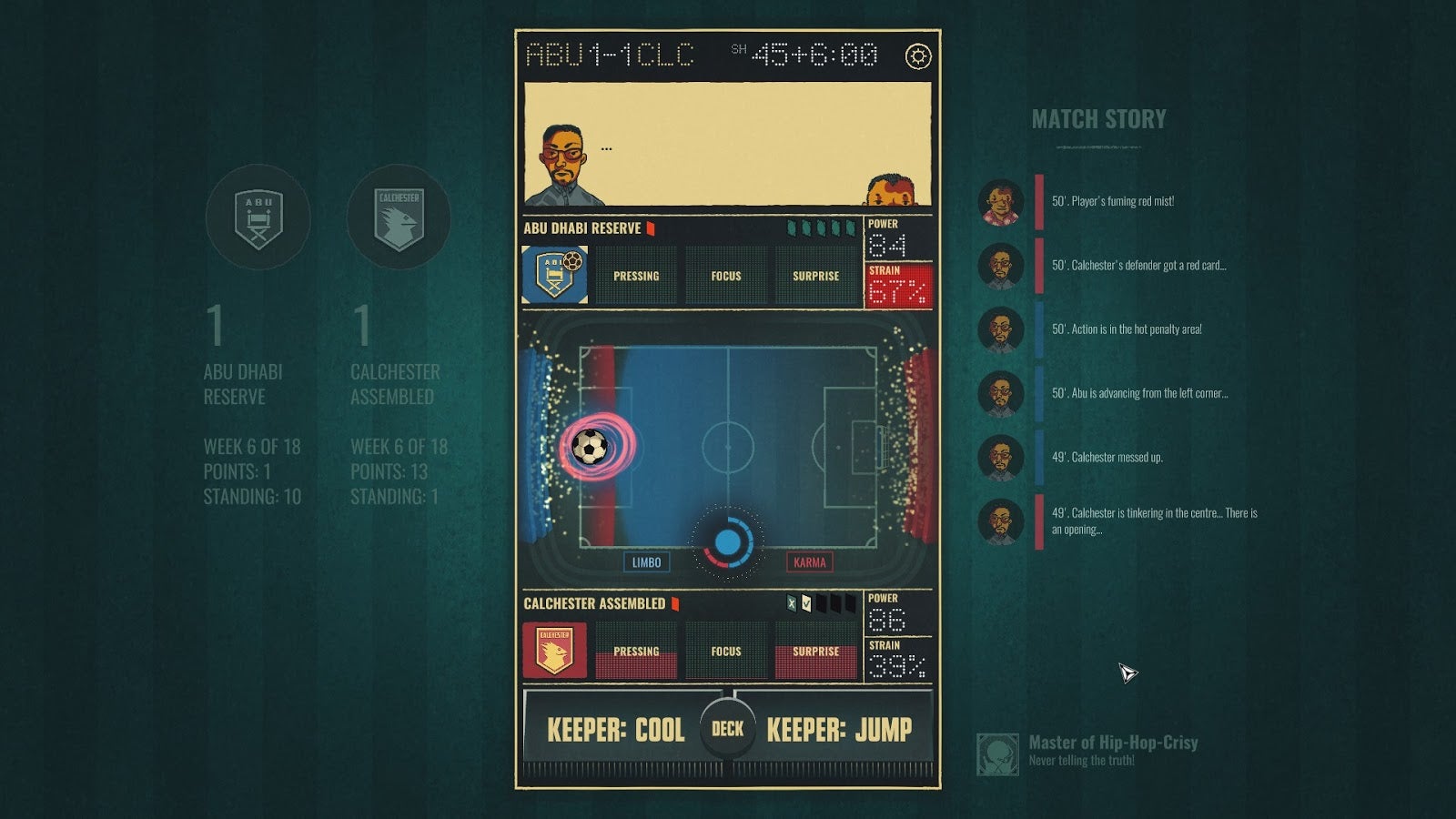 Aside from the cards, you play a match by choosing between risky or less risky actions — shooting the ball or keeping control of it when it’s in your possession, tackling or marking when you’re on defence. These actions are controlled by meters; do too many risky actions and you have to let your risk cool down again.

It all looks simple, but the developer says there’s a ton going on under the hood regarding your team’s dimensions, and some calculations regarding who dominates a match at a given time.

Despite this complexity, my gameplay mostly boiled down to keeping an eye on my risk metre and periodically playing cards. The underlying maths never really figured visibly into my choices, and once I stopped trying to parse all the information, I found the game an engaging combination of light strategy and unpredictability. 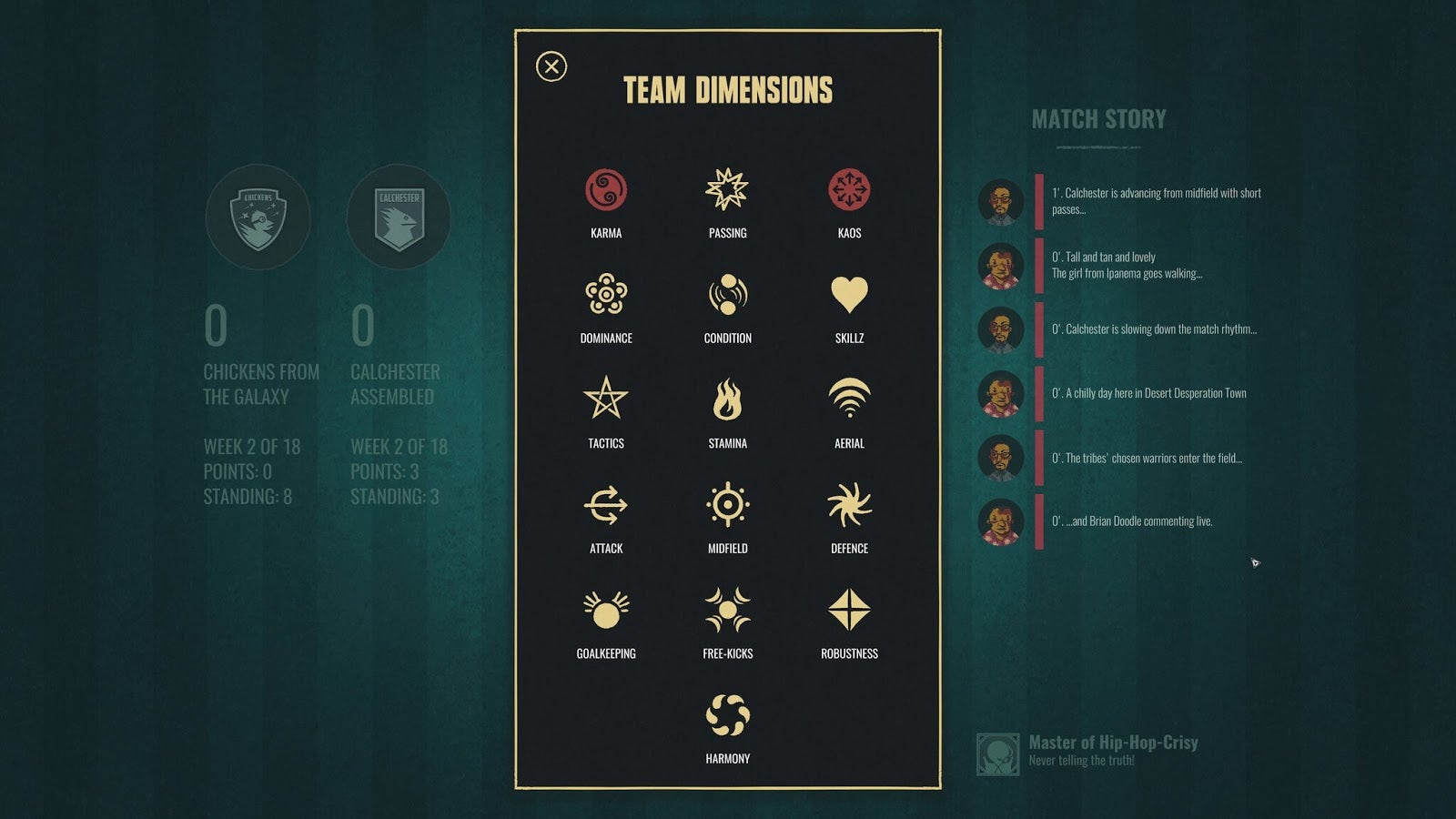 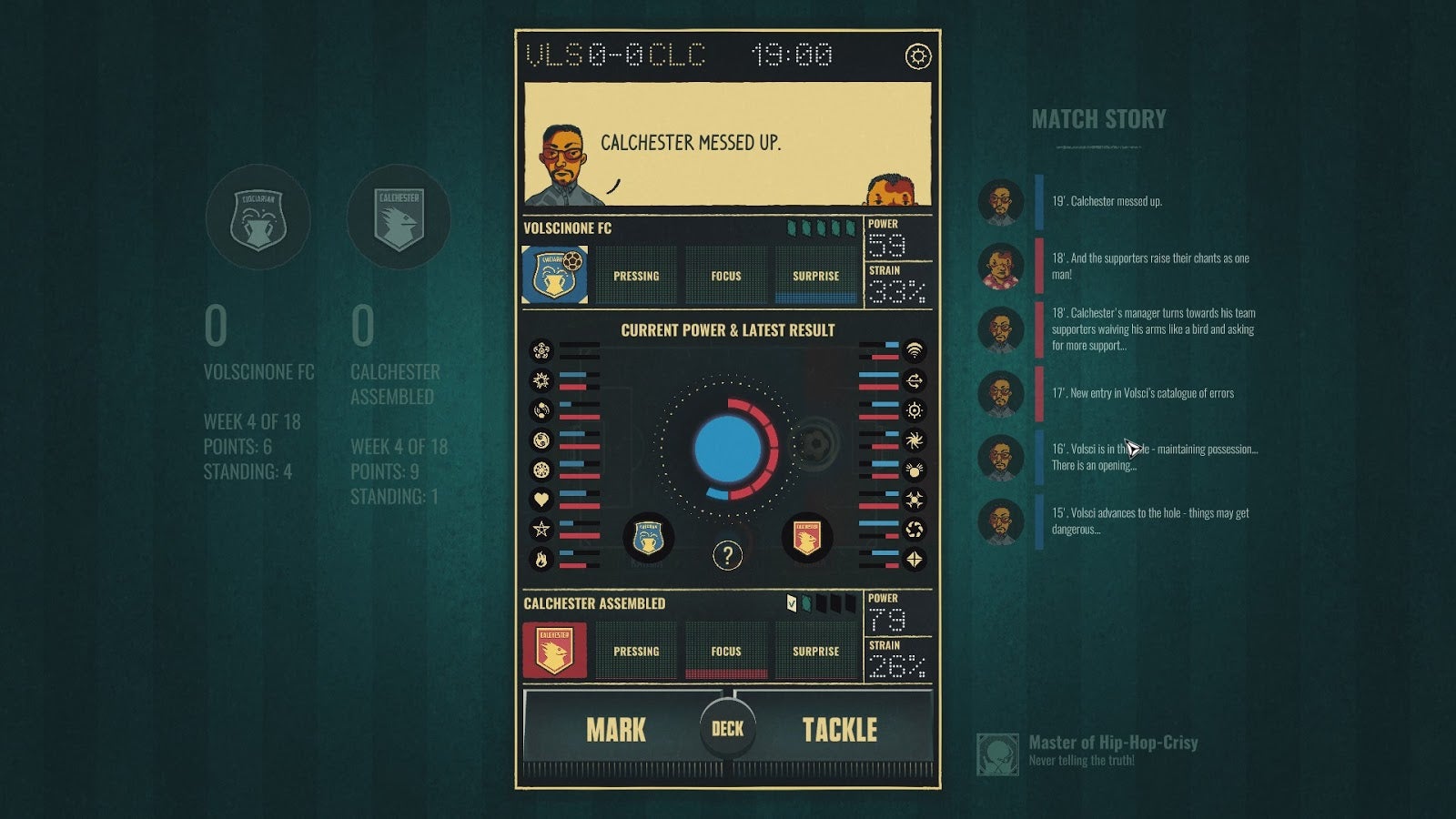 Team dimensions represented as a grid

There’s a lot of Football Drama I just don’t get. The dialogue can be overly poetic or inscrutable, and there are occasionally weird turns of phrase, like the press saying “we will storm your remarks on social media.” I wondered whether the latter was a translation issue or a poetic commentary on Twitter.

At one point in the game there’s a dream sequence featuring Italian filmmaker Pier Paolo Pasolini, which made me think the game’s oddness was an intentional homage or part of the game’s arty, dramatic vibe.

Dream Pasolini calls football “a system of symbols,” and that idea certainly fits Football Drama’s aesthetic. Everything feels like it’s pointing toward something bigger than the moment or than the game of soccer, even if I finished the game not quite sure what that thing was.

Football Drama is a pretty long game. The 18 matches and the stories between them took me about 10 hours to complete. It can feel repetitive to play for long stretches at the PC, but it has so many of the makings of a great mobile game, with simple controls and a structure that will make it easy to play during commutes without forgetting what’s happened.

My Rocco steered Calchester to the championships pretty easily, but there are choices I didn’t make, including intentionally throwing matches, purchasing illicit performance enhancers, or getting involved in illegal dealings. Rocco can even be fired, permanently ending a run. Football Drama is strange but compelling, and even if I didn’t get all of it, it stuck with me.