In the days since Chung “blitzchung” Ng Wai received a one-year suspension from the Hearthstone esports scene following his support for the ongoing protests in Hong Kong in the middle of a stream, the community has become a hotbed for politically charged discussion. The scene’s subreddit—where a large portion of community news is shared and broken—is filled to bursting with pro-blitzchung and anti-Blizzard sentiments. One of the moderators, citing dissatisfaction with Blizzard’s response to the blitzchung incident, has stepped down from his role. Since then, the blitzchung ruling has become the Hearthstone community’s elephant in the room, with silence on the matter becoming increasingly difficult to maintain. Now, after a period of soul-searching, responses have begun to flood in from some of the most visible members in the scene.

Earlier this week, the streamer and Hearthstone esports shoutcaster Brian Kibler published his own thoughts on the matter in an extensive blog post. While he voiced understanding toward Blizzard’s decision to act on the politicization of one of their broadcasts, he expressed concern that Chung’s punishment—in this case a one-year suspension and revocation of prize money—greatly outweighed the crime. To end his blog post, Kibler announced that he would not be casting the Grandmasters finals at BlizzCon, an event that’s scheduled to happen later this month. “I will not be a smiling face on camera that tacitly endorses this decision,” Kibler said in his post. “Unless something changes, I will have no involvement in Grandmasters moving forward.”

Kibler’s decision is noteworthy because it’s the first to come from the most visible quotient of the Hearthstone community—the streamers themselves. But Kibler’s initiative seems to have been the catalyst for a wave of streamer action. In the aftermath of his post, another top Hearthstone streamer, Octavian “Kripparrian” Morosan, published his own TwitLonger post weighing in on the blitzchung story, which is particularly notable considering his past refusal to bring any political discussion into his streaming content whatsoever:

…I want to be clear that I support those protesting in Hong Kong. With such a large part of their country pushing for change, they are, and deserve to be on the right side of history.

I haven’t been involved with competitive esports Hearthstone for years now, but Hearthstone for me is much more than their esports division and their recent poor decision making. I invite Blizzard to reconsider their position. Sure, they are in the entertainment space, so they want to keep anything that isn’t about Hearthstone out of their official broadcast, but the penalty on Blitzchung and the casters seems just too over the top. All of us who have spent the best part of our lives on Battlenet expect better out of Blizzard.

The next day, the pro player William “Amnesiac” Barton, another competitor in the Hearthstone Grandmaster League, tweeted his support for Chung’s actions and denounced Blizzard’s ruling. “I recognise that my decision to speak up may have consequences, but I believe it’s important to stand for what you think is right, and stand for the rights of others when they can’t necessarily do so themselves.”

Following that, the shoutcaster Nathan “Admirable” Zamora threw his hat into the ring, saying that he too would not be casting any more Hearthstone Grandmasters events for the rest of the season and through BlizzCon later this month. “Blitzchung’s actions to support Hong Kong speak to me far more than I could have imagined,” he said in a tweet on Thursday. “It takes courage to stand up for what you believe in, and to make sacrifices in the process. His actions are inspiring to me, and I support him wholeheartedly.” 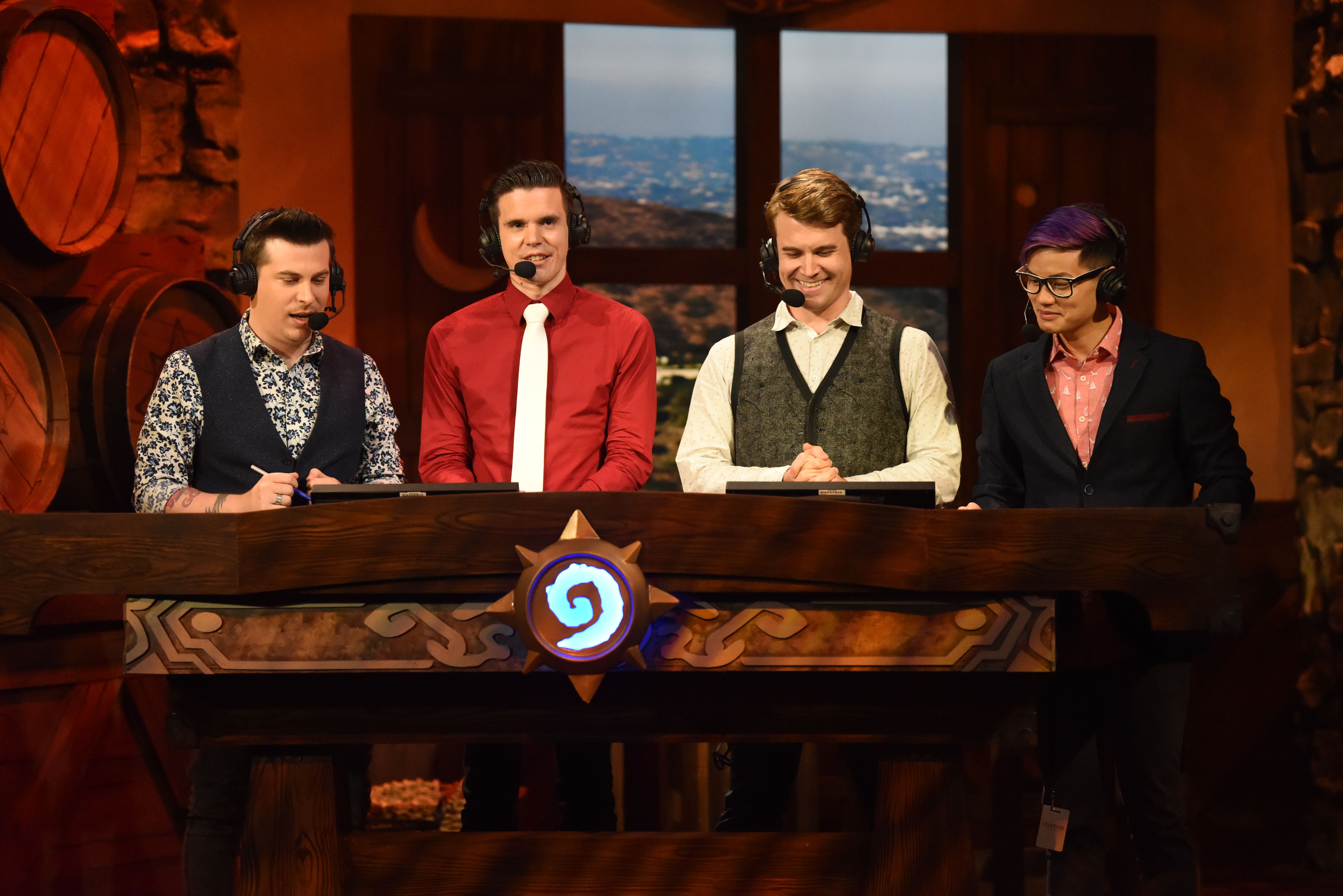 Meanwhile, the shoutcasters Simon “Sottle” Welch, Alex “Raven” Baguley, and Darroch Brown all decided to continue casting Grandmasters games in accordance with their existing contracts while vocally disapproving of Blizzard’s actions. “I fully support Blitzchung’s right to protest and have immense sympathy for his cause and for the plight of the Hong Kong people,” Welch said in a tweeted statement on Thursday. “However, in light of the recent revelations that one or more casters will be stepping away from Hearthstone, I would like to affirm that I fully intend to fulfil my contracts with Hearthstone Esports and am open to work with them in the future.”

In contrast with Barton and the casters, players and streamers have been slower to respond. While some immediately voiced that they were puzzled by the blitzchung verdict, a significant majority declined to say anything at all, opting instead to continue streaming and publishing as usual. In a tweet that has since been deleted, the pro streamer and Hearthstone Grandmasters competitor Paul “Zalae” Nemeth said that he had been experiencing pressure to “make huge career/financial sacrifices to support a political cause on the other side of the planet that I know almost nothing about.” In general, the trend toward silence suggests that many others harbour a similar instinct to approach the issue with caution.

As the situation developed further, Nemeth retweeted both Brian Kibler’s blog post and Admirable’s statement—suggesting solidarity with their decisions to step down from Blizzard casting. The popular Hearthstone streamer Jeffrey “Trump” Shih acted similarly, retweeting Kibler’s announcement post and thanking him for his decision to act on the matter. In response to Simon “Sottle” Welch’s post about continuing to participate in Hearthstone-related activities despite his disapproval for their actions, Shih responded with the closest he’s gotten to a statement yet: “It’s basically the same decision I’m making.”

Thursday afternoon, in a Hearthstone-related news show called Omnistone, 2014 Hearthstone world champion James “Firebat” Kostesich weighed in on the matter. While he didn’t mention the Hong Kong protests explicitly, he voiced concern over Blizzard’s dramatic response: “Murdering a guy’s Hearthstone career, or attempting to anyways, off of that is… it’s very hard to see… Using a player as an example for some sort of thing, it doesn’t make me feel good.”

It’s easy to see why streamers might feel as if they’re stuck between a rock and a hard place. Recently, a statement emerged from the Taiwanese pro player Chen “tom60229″ Wei Lin, who won the Hearthstone World Championship in 2017. Like Nemeth, Lin was also pragmatic in his approach to the situation, and while he criticised Blizzard’s actions as “inappropriate and irrational,” he said he would withhold his full statements until after he was done competing in the current round of tournaments. “Only then I will do what needs to be done and say what needs to be said…After all, in the moment of competing in tournaments, I do not think there is any meaning in saying and doing anything.”

Throughout the scene, streamers are posting their recent streams to YouTube as they normally do, with Brian Kibler and Kripparrian themselves posting Hearthstone stream videos as recently as today. The difficulty of taking a huge career risk in the wake of a corporate blunder may be part of the reason Kibler himself encouraged onlookers to refrain from passing judgement on streamers and other high-profile members of the Hearthstone community. “Do not take your anger out on the other casters, or streamers, or employees of Blizzard,” he said in his post. “This is not the kind of decision that comes from the rank and file.”

Jeremy “DisguisedToast” Wang, a former mainstay of the Hearthstone community who has since moved on to Teamfight Tactics, acknowledged the difficulty streamers in the scene face in approaching the issue. In a tweet on Thursday, he showed empathy toward Hearthstone streamers while adding a bit of his signature snark:

Hearthstone streamers are being pressured to stop streaming Hearthstone due to the Blitzchung drama, but that's financially unrealistic for them.

So I'll make this offer instead.

BLIZZARD, I will START playing Hearthstone again if you reconsider your position about his ban.

Unfortunately, streamers and pro players may find it increasingly difficult to avoid involvement as the situation continues to develop. Already, Twitch chat and YouTube comment sections are overflowing with controversial discussions about Blizzard and Hong Kong. Jason “Amaz” Chan, a community mainstay who recently began streaming Hearthstone again after a hiatus, says he cut off his stream early on Tuesday when his chat section was overrun with comments about Hong Kong: “I’m obviously aware of the Hong Kong issue right now, and I follow it quite a bit. My family lives there, so how could I not. I still find it very annoying that my chat gets spammed with ‘FREE HONG KONG’ every now and then.”

For now, the streamers mentioned have yet to respond to Kotaku’s requests for comment. We will continue to monitor the situation as more people speak out and BlizzCon approaches.