Holy Crap, Marvel’s Kylo Ren Comic Will Lift The Lid On The Knights Of Ren’s Mysterious Past

I mean, it was already incredibly interesting. Charles Soule — who did a fascinating job on the second run of Darth Vader with Giuseppe Camuncoli — tackling the intriguing, conflicted, wayward villain of the Star Wars sequel trilogy? And so close to The Rise of Skywalker, too? Well, now this latest tidbit about the series has our heads spinning even harder.

Thursday, January solicits for Marvel’s upcoming comics gave us the first details of The Rise of Kylo Ren #2, the second issue in the miniseries by Soule and Will Sliney due out January 15. Most importantly, it gave us a look at Clayton Crain’s cover for the series… depicting not Kylo Ren, but Ben Solo.

And his master, Luke Skywalker.

Battling the Knights of Ren together. 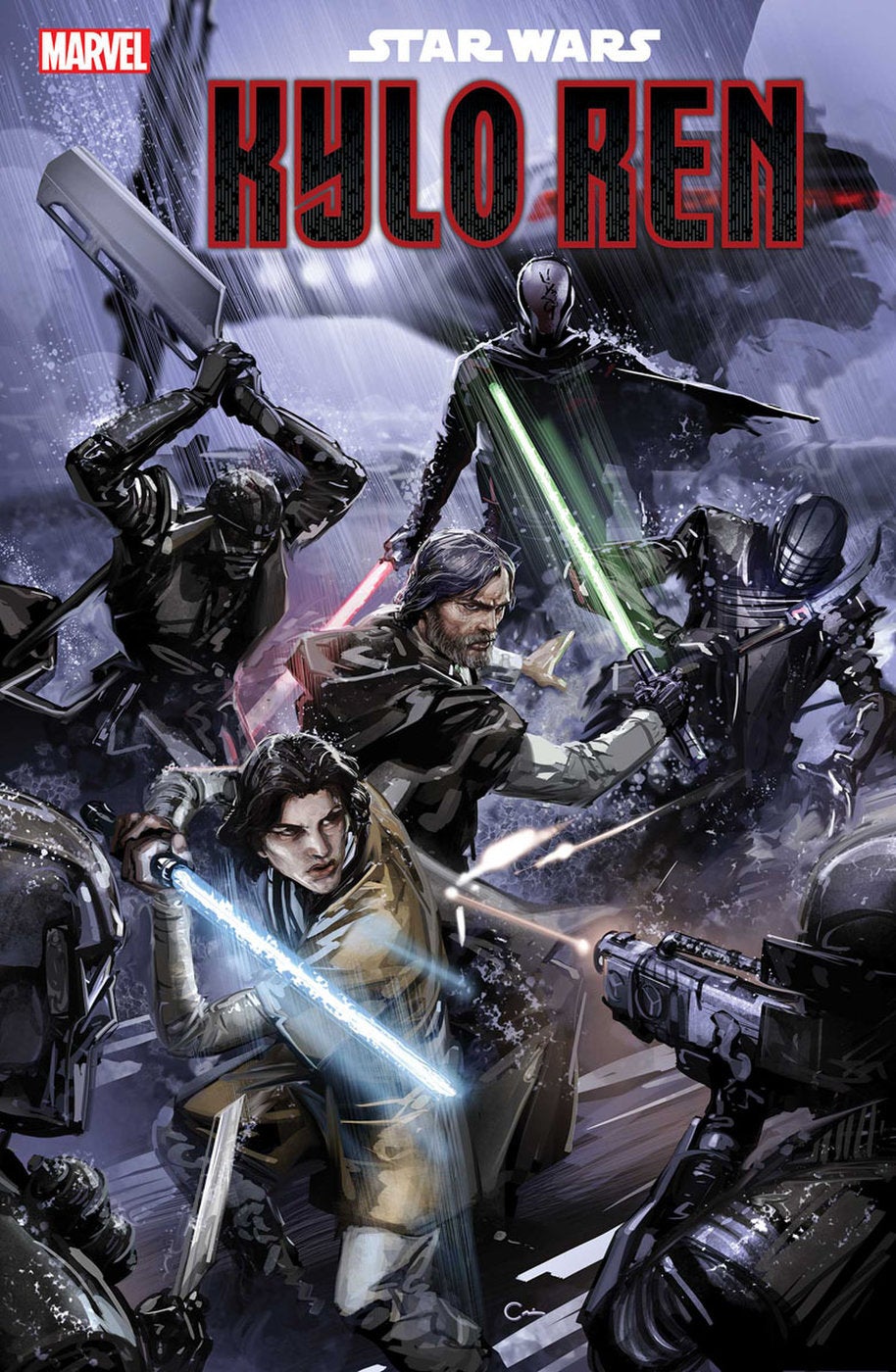 Hot diggity dog! Here’s the brief teaser of what we can expect inside the issue:

Now, as cool a sight as it is, it’s not too surprising to see the Knights of Ren sans Kylo. Ever since they were first teased, we knew that Ben (née Kylo) was inducted into an order that was established long before him — he didn’t become Kylo and then make his own knights. But still seeing Ben Solo, Jedi Padawan, facing off against them punctures a few long-running theories about the identity of these figures.

First off, the description reveals that this duel takes place in the Star Wars galaxy’s mysterious Unknown Regions, an area beyond charted space that is home to everything from the Chiss Ascendancy, to the secret armadas of the First Order (and a sect of Imperial loyalists before them), to Snoke, and to a mysterious power that Emperor Palpatine spent his rule of the Galactic Empire coveting.

That ties the knights closer to Snoke than it does Ben, but it also throws aside the long-running theory that the Knights are the fellow students we’re told Ben ran away with the night he attacked Luke (in self-defence, as we learned in The Last Jedi) and burned down the fledgling Jedi temple he’d built.

But there’s something else very exciting about Crain’s cover. We’ve seen the Knights wielding various melee and ranged weapons in both their brief presence in the films and in teaser art for The Rise of Skywalker and The Rise of Kylo Ren first shown back at San Diego Comic-Con.

They were all typical Star Wars-y things — blasters, axes, spears, and so on. One of these Knights, however, has an honest to god crimson lightsaber. And if you’ve been keeping up with the Star Wars tie-in media since the run-up to The Force Awakens, a certain alarm bell might be ringing in your head right now.

Is there a connection to the Knights of Ren and the Acolytes of the Beyond?

In Chuck Wendig’s Aftermath trilogy of novels, the Acolytes of the Beyond were introduced as a roaming cult who believed they were guided by visions of ancient Sith Lords, fighting against the fates the will of the cosmic Force imposed on all living things. There were myriad cells across the galaxy, who ventured around seeking ancient Sith relics to draw power from…including old Sith lightsabers.

In the first book of the trilogy, one cell of the Acolytes headed to the planet Taris (introduced in Bioware’s beloved, but now mostly non-canonical RPG classic Knights of the Old Republic) and purchased what they believed to be the actual lightsaber of Darth Vader, recovered from Endor in a similar manner to the way Vader’s melted mask eventually was. If the Acolytes eventually sought the same power Palpatine had sensed out in the Unknown Regions, did they venture there and ultimately become the first generation of the Knights of Ren?

Hell, is this Knight wielding the lightsaber of Luke’s father, of Ben’s grandfather, sparking an intriguing arc that could lead to the latter’s eventual descent to the Dark Side? Or is it just another one of the ancient weapons they’d recovered as Acolytes of the Beyond?