Android 10 is the latest version of Android, and it’s chock full of new features, like improved security, gesture-based navigation, updated parental controls and support for foldable screens. And with every update of Android comes a few new and improved accessibility features for folks with disabilities. Many of them are invaluable for every type of user.

They range in type and can be easily enabled from the Accessibility settings menu. Most importantly, they make Android more convenient to use for anyone living with a visual, hearing, speech, or physical impairment.

Once you toggle on Dark theme, the Android system interface and any compatible apps will go dark. (Screenshot: Florence Ion)

Dark mode is not technically a part of Android’s accessibility features, but it’s all anyone seems to be talking about these days—and for a good reason. Light text on a dark background tends to be a friendlier colour scheme for most folks. It’s especially helpful for those with light sensitivity or photophobia, or those who are prone to headaches from bright displays. And as an added benefit, a darker user interface can help save on battery life.

Dark mode is available through the standard Android settings panel. Under Display, scroll down to the Dark theme option, and flip the switch to toggle it on. This will apply dark mode system-wide. The Android interface and various elements, along with any compatible apps, will automatically switch over to the darker theme.

Unfortunately, if there are third-party apps on your device that haven’t adopted the darker colour scheme, you’ll continue to contend with white backgrounds. A surefire way to make it known that you rely on the darker interface is to send an email directly to the developer through the Google Play Store or leave a review requesting the ability. 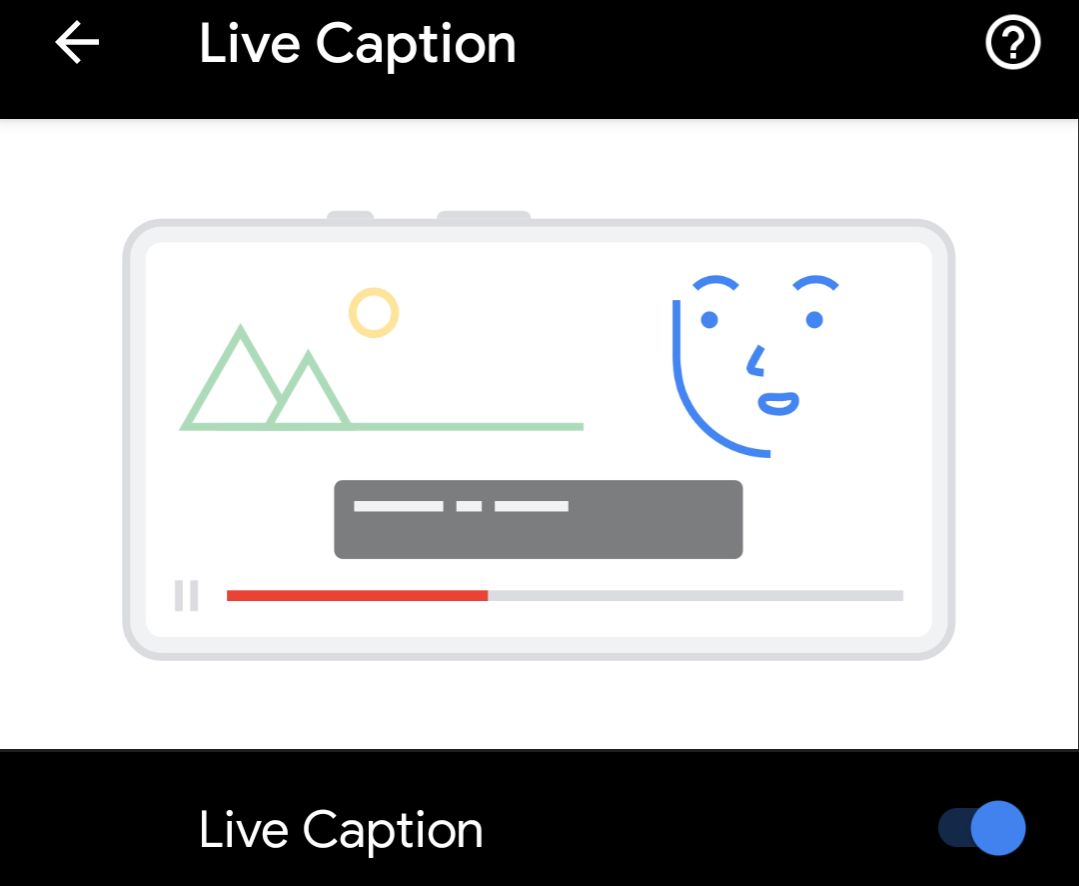 Live Caption is going live with the launch of the Pixel 4. (Screenshot: Florence Ion)

One of Android 10’s marquee features is Live Caption, which adds automatic captions to any video or spoken audio (save for phone and video calls). Live Caption works with videos on social media, too, like Twitter and Instagram. And it’ll even work with podcasts.

The captioning happens on-device, so it functions even when you’re in aeroplane mode. It’s currently available on Pixel 4 and Pixel 4 XL devices, with the rollout expected to hit the Pixel 3, 3XL, 3a, and 3a XL later this year. Google says it’s also working with other device manufacturers to make it more widely available in the coming year.

Live Caption is available in the Accessibility settings menu, under the section labelled Audio & On-screen Text. Once you toggle it on, you can choose your text size, caption style, and default language.

Live Captions in action on a vintage episode of Baywatch. (Screenshot: Florence Ion)

For those who don’t yet have access to Live Caption, try out its sibling feature called Live Transcribe. It launched in Android 9 Pie and can transcribe both active dialogues from your surroundings and any audio playing on your device.

Live Transcribe can be turned on from the same Accessibility settings menu as Live Captions, under Audio & On-screen Text. Once enabled, it’s accessible via the bottom navigation bar. You can customise Live Transcribe as you like, with options ranging from how big to display the text to whether you want your device to save a transcription after the fact. By default, you can use Live Transcribe with two languages.

Sound Amplifier works subtly when it’s turned on, but it can be helpful for tuning into the speech and sounds around you. (Screenshot: Florence Ion)

Sound Amplifier has been billed as an Android 10 accessibility feature, though it’s been available for use since Android 9. It’s been updated with the latest release to include a refreshed interface and the addition of backward compatibility with Android Marshmallow.

Sound Amplifier effectively amplifies ambient sound and spoken word that’s picked up by wired headphones plugged into your phone. It can help you tune in to your surroundings a bit better while simultaneously dulling any sounds that are too loud. It’s available in the Accessibility section of the Android settings menu under Audio & On-screen Text. Like Live Transcribe, you can toggle the feature on and off from the bottom navigation bar.

Audio balance lets you adjust the output of the left and right speaker or a pair of earbuds. (Screenshot: Florence Ion)

Along with Sound Amplifier, folks can now adjust the Audio balance of audio and music streaming from an Android device. The slider is available in the Accessibility settings underneath Sound Amplifier. Move the slider as you’re listening to music or spoken word until it sounds preferable.

Since the specification is open source, any OEM or handset manufacturer can utilise it to optimise their smartphones for use with hearing aids. It will also help eliminate the need to cart around a dongle, and it has the added benefit of helping prolong battery life on both the hearing aid and the smartphone.

Android’s “Talkback” screen-reading feature is one of those oft-used Accessibility features that updates on a different release cycle than Android’s annual system updates. According to Brian Kemler, Google’s product manager for Android accessibility, the updates are typically three times annually, with the next release slated to hit November 2019. In a phone call, Kemler confirmed that the update would include tweaks to Talkback’s overall performance, stability, and code health, along with improvements meant to help “optimise the existing product.” Kemler also alluded to some new Talkback features intended to aid the blind and visually impaired. 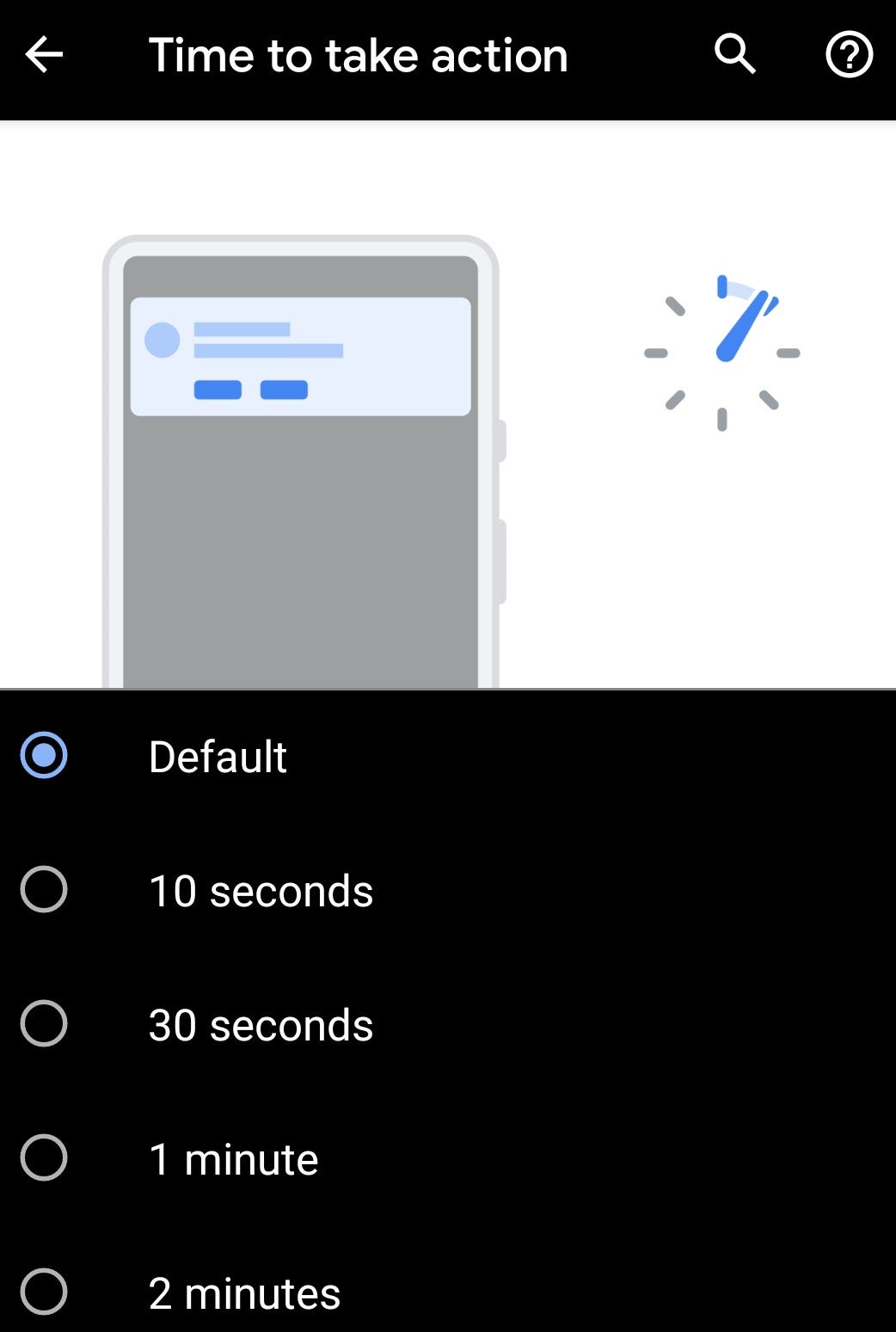 Choose how long you want notifications to stay on the screen before they fade away. (Screenshot: Florence Ion)

Folks who perhaps require a bit more time to take action on a notification or system prompt can adjust their time-out preferences before it disappears. In the Accessibility settings, you can choose anywhere between 10- to 30-seconds, to two minutes before the pop-up disappears. The only caveat is that some third-party apps aren’t compatible with this feature. 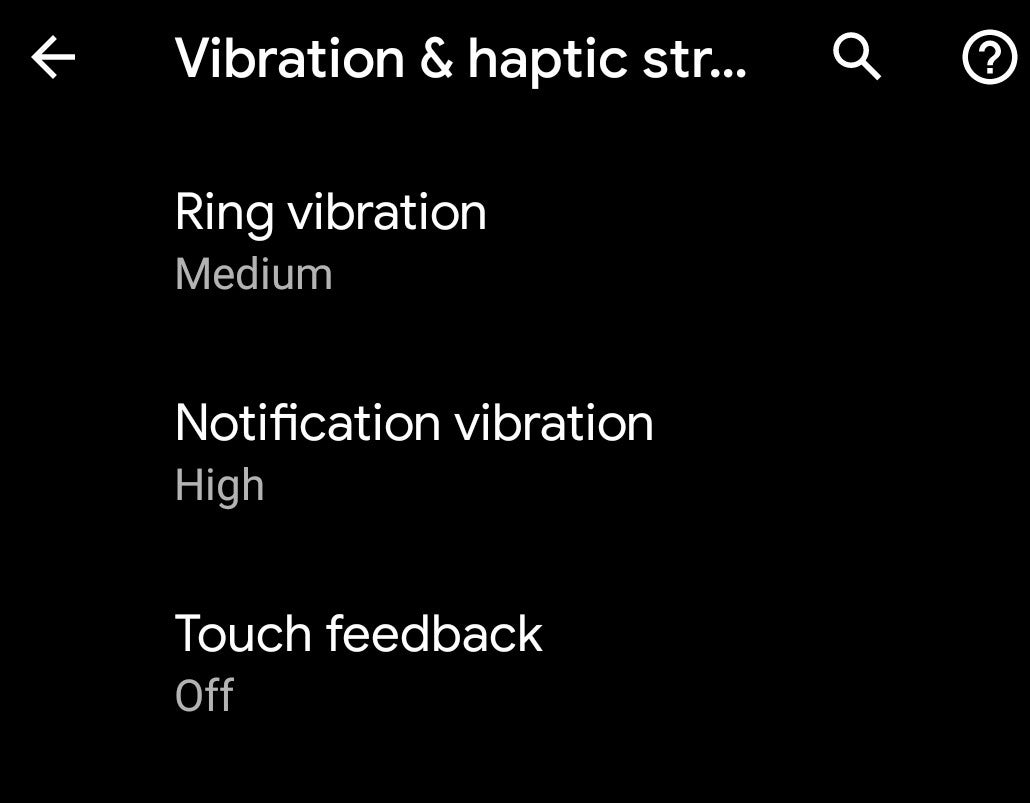 Choose the strength of the vibration motor when your phone rings, or if you want haptic feedback while touching the screen. (Screenshot: Florence Ion)

Use this feature if you want to adjust the intensity of your smartphone’s vibration motor when it rings, or enable haptic feedback as you’re touching the screen. If you’d rather not have the phone respond at all, you can turn vibration and haptic feedback off through this setting, too.