Upgrade Your Battlestation With Our Massive Roccat X Sniper Elite 5...

This morning at around 3am, jolted awake by an antsy newborn, I rolled over to check my email and was alarmed to see a message from EA with the subject: “You’ve redeemed an Origin Access Membership Code.” Goddamnit, I thought. Did someone hack me? Turns out it was just EA starting off everyone’s day with a nice little scare. 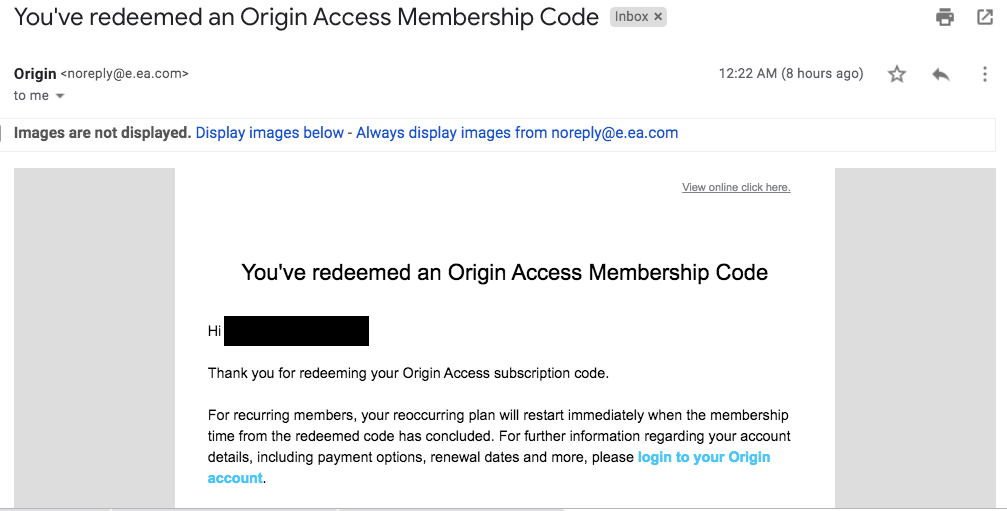 Ironically, this email came as the result of an EA initiative to reward users of its PC platform with more security. Last month, EA quietly announced that Origin users with two-step verification enabled (in honour of “National Cybersecurity Month”) would get a free month of Origin Access Basic, which offers discounts and access to a bunch of old games. This was them making good on that promise.

Now if only “making good” hadn’t also equated to “scaring the hell out of users into thinking they’d been hacked and might have even lost all of their progress in Star Wars Jedi Fallen Order and had to start from scratch just like their buddy Kirk did.” Telling people that they’ve redeemed a code out of the blue is a good way to get them to immediately freak out and change all their passwords, especially in a world where just about every company (EA included) has been the target of a massive security breach.

I mean, fucking hell, EA, you scared the shit out of me last night. And a lot of other people:

EA out here scaring everyone half to death with an Origin Access purchase confirmation, totally thought I'd been hacked.

It's actually a trial they applied to all accounts. Stupid bastards. pic.twitter.com/KJjkI5BE4k

For fuck sake Origin, if you're going to give people a month of Origin Access, fucking announce it first, and don't send emails like this. I fucking had a heart attack pic.twitter.com/NVqg1jVehG

Big thank you to the person who hacked my EA account, redeemed a code for a month of Origin Access, and then got kicked off by me setting up TFA. I look forward to trying out some games thanks to your code!

And on and on and on. Why is it that even when they’re trying to do something nice, EA just can’t seem to avoid stepping on rakes?