Midnight Diner is one of those shows I approach like a late night snack; I save it for special occasions, wait until I’m in the right mood, then savour its company. The new season just released on Netflix and as the first episode centred around a game director, I thought it was the perfect episode to explain why you should watch the series.

Based on a manga of the same name by Yarō Abe, every episode focuses on a different character and a new dish that the diner’s chef cooks up. The diner, located in Shinjuku, only opens from midnight to 7 in the morning and seats twelve customers. Its owner, called the Master by its patrons, has a small menu, but is willing to cook any food his customers want as long as he has the ingredients. When he lacks something, his customers can bring in their own ingredients. That flexibility is what gives the wiggle room for the expanding palate of each episode. 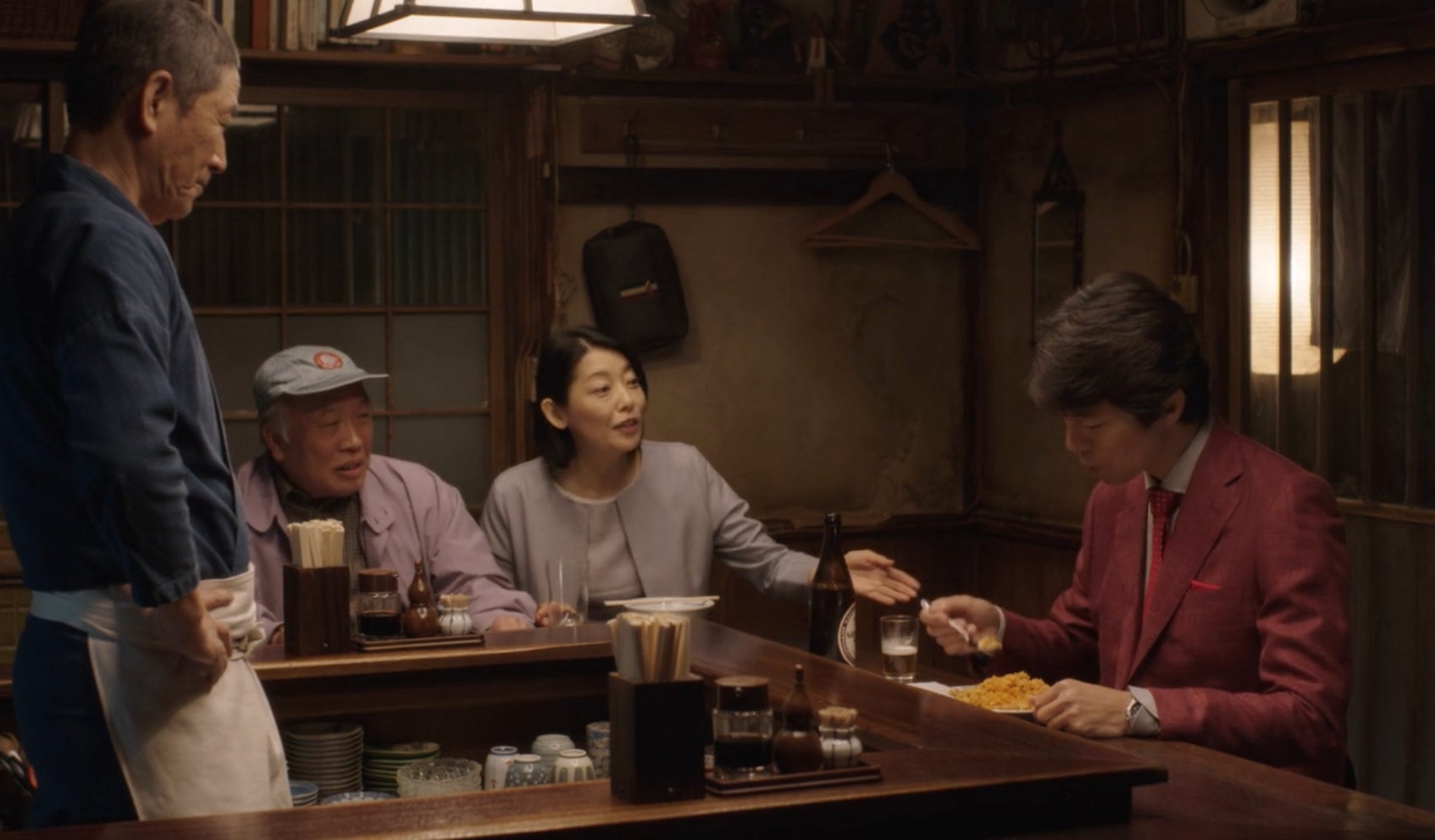 “Chicken Fried Rice” is the main dish for the opening episode of season 2. It centres around Akai, a game designer who likes to wear red suits (akai is also Japanese for red). Next to him are two recurring characters who act as a off-kilter Greek Chorus for the events that are happening. Akai gets to analysing Master’s approach to cooking, analysing it like a game, before ordering the titular chicken fried rice.

Call it culinary porn, or just damn good cinematography. Midnight Diner always shows the Master cooking the dish in question. I salivate watching these scenes, and it was no different watching him cook the chicken with onions, apply sauce, throw in some rice, mix it together, and finish off with some green peas on top. There’s always a reaction shot where the customer eats the food and relishes it, making me wish digital scent screens were a thing. Akai likes the fried rice as it reminds him of his favourite dish from his childhood, but he separates out the green peas from the food. When Master inquires if Akai doesn’t like the peas, Akai admits he used to dislike them, but grew to appreciate them.

Midnight Diner rewards the attentive viewer. When the customers notice that Akai wears a red suit and even eats red-coloured food, Akai replies that red gives people power. Based on the preponderance of red, including a red tie and red handkerchief, it wouldn’t be a stretch to conclude power is important for Akai. What kind of game director was he?

Later on, two gamers are eating at the diner and notice Akai’s business card. They excitedly remark how famous he is and ask the Master why he has the card. Master explain that a film crew is making a documentary about Akai and they want to film at the Diner. As the customers get to talking about the relationship between games and life, one of them states, “Life, it’s not like a game. You can’t reset it.” 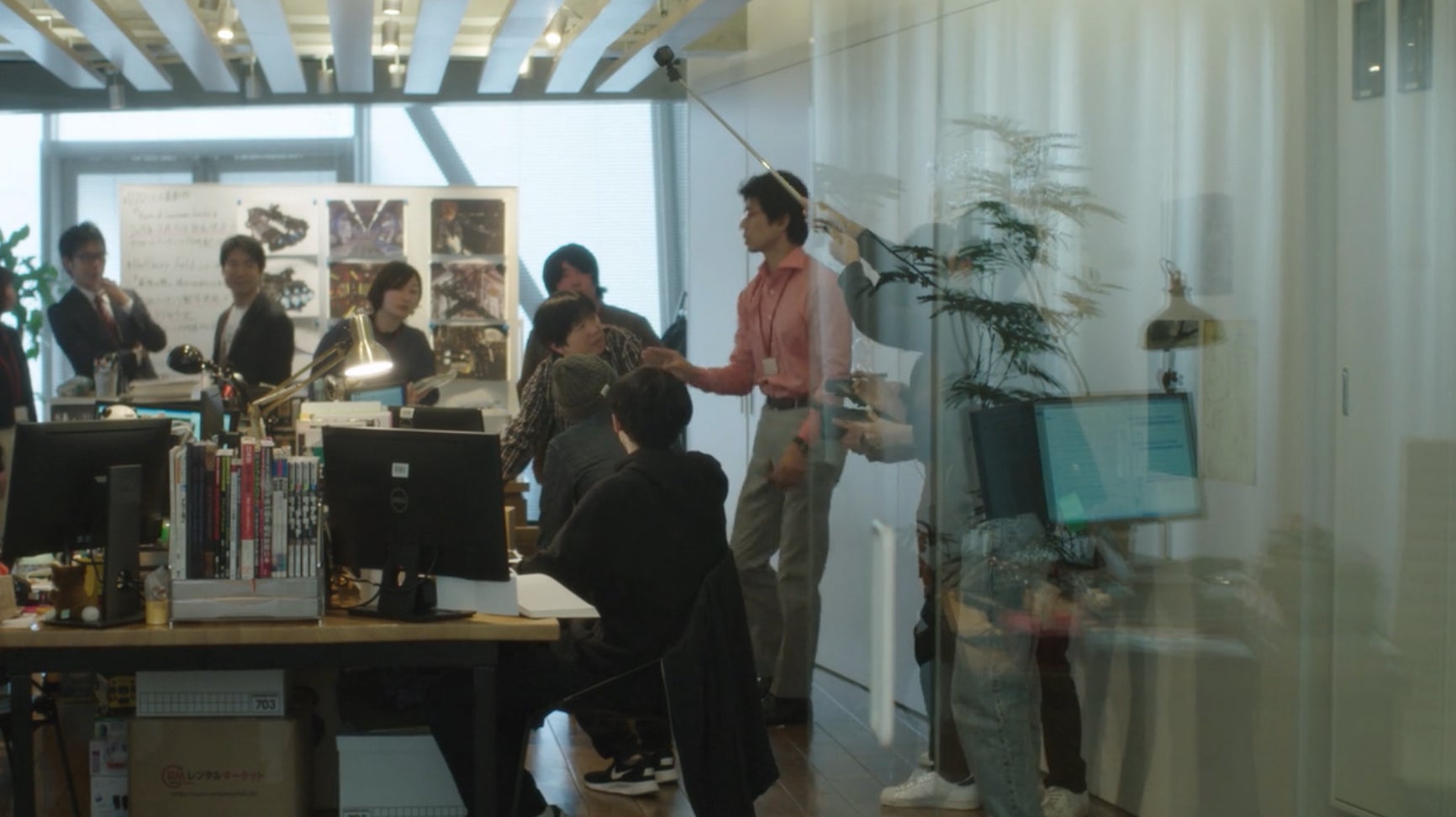 You can, however, reset game assets. We see some of the documentary footage where Akai is expressively directing an animator. Using his hands, he makes a serpentine motion to request changes and explains, “It won’t be dynamic enough if it doesn’t move like this.” Diving more into his background, the documentary reveals that Akai was orphaned when he was young and turned to video games in high school to “escape reality.”

We cut to another bar where an elderly woman who appears to be a bartender is watching the documentary on the TV with her customers. Akai explains in the show how he used to eat the fried chicken rice on special occasions and they even show a photograph of him as a young boy. The elderly woman is deeply affected by the image. It’s not explained why, but it’s clear they have some connection. 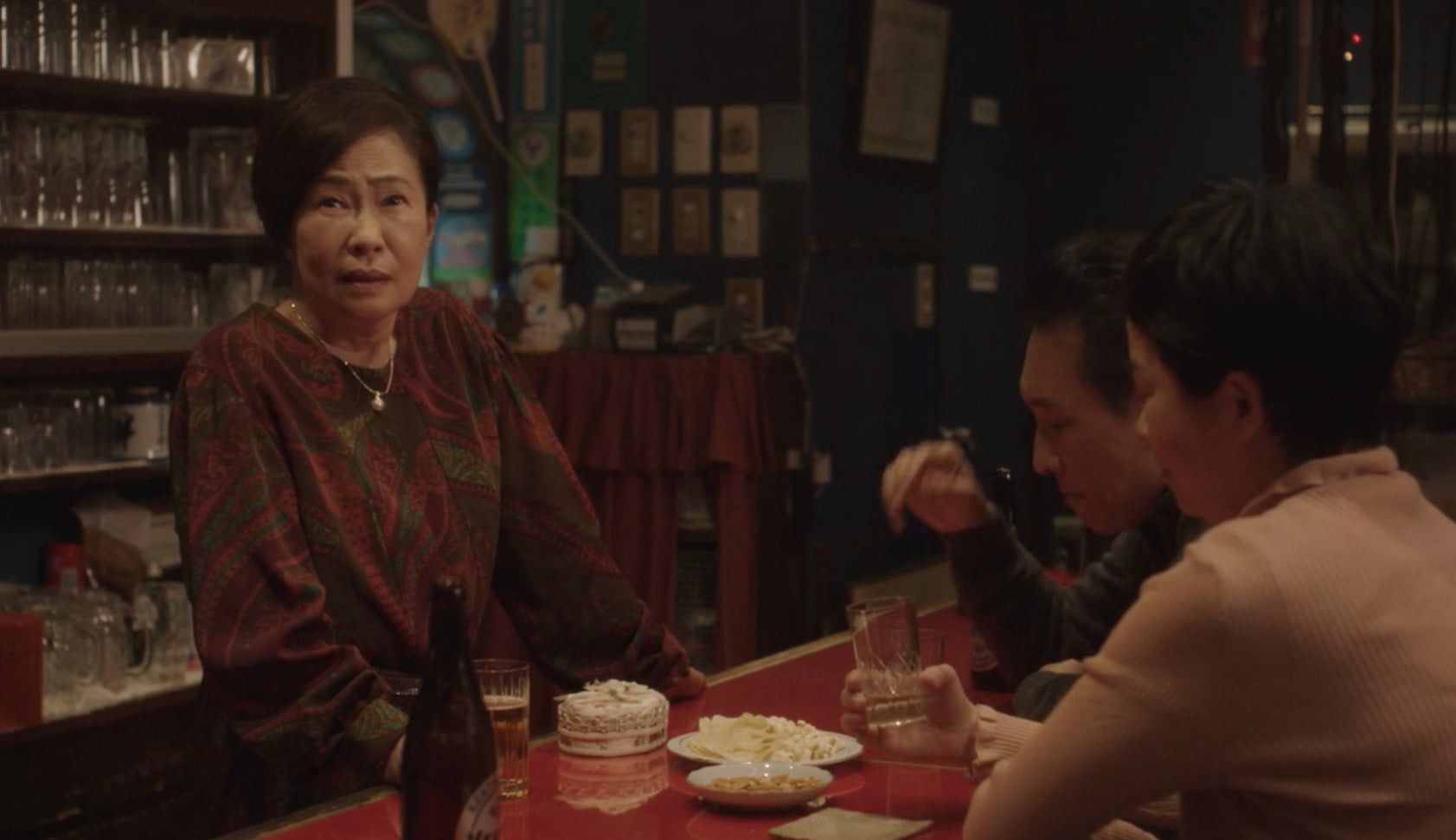 We jump back to the diner and one of the customers notes the Master seems glum. It turns out the Master had hoped a flood of new customers would come in after seeing the diner on the show. He’d even bought a bunch of extra ingredients as a result. Unfortunately, no one came. Outwardly, he tries to act stoic about it, shrugging and saying it was an unnecessary concern. But when the elderly woman/bartender comes in, stating she saw the diner on the documentary, there’s glee in the Master’s eyes. 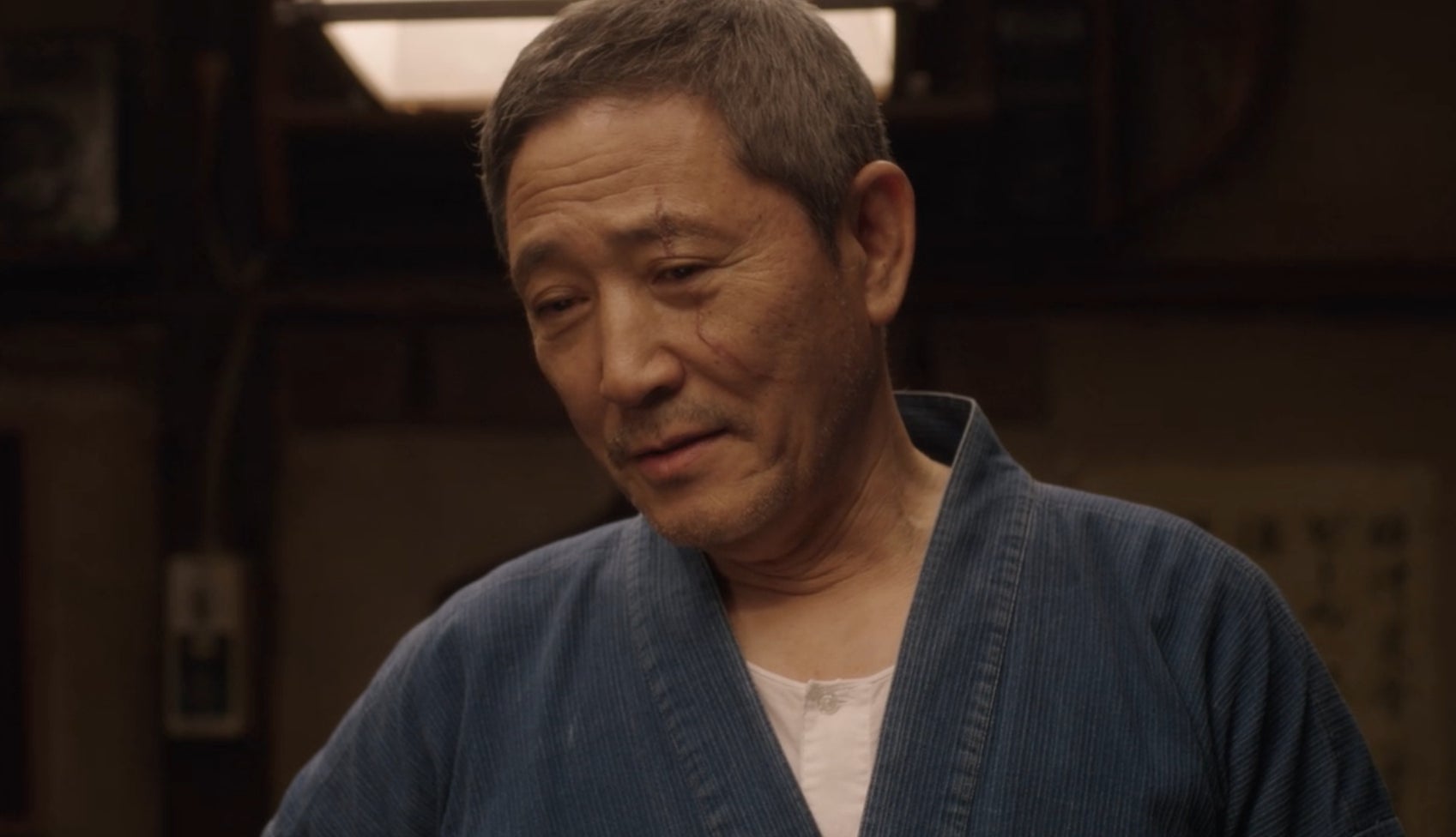 Kaoru Kobayashi, who plays the Master, does a masterful job of conveying emotion in subtle ways. The Master is reserved and doesn’t like to show his concern overtly. He mostly does it by cooking the right dishes at the right time and saying a word or two of advice. He has a scar on his right eye, which is never explained, and his silent gaze often speaks more than his actual words.

Meanwhile, Akai is testing out his first-person game but the screen wigs out and the game crashes. It looks more like a video error than something a game would do. He works through the whole night and it’s not clear if he’s actually fixed the issue, but he’s depressed and frustrated. 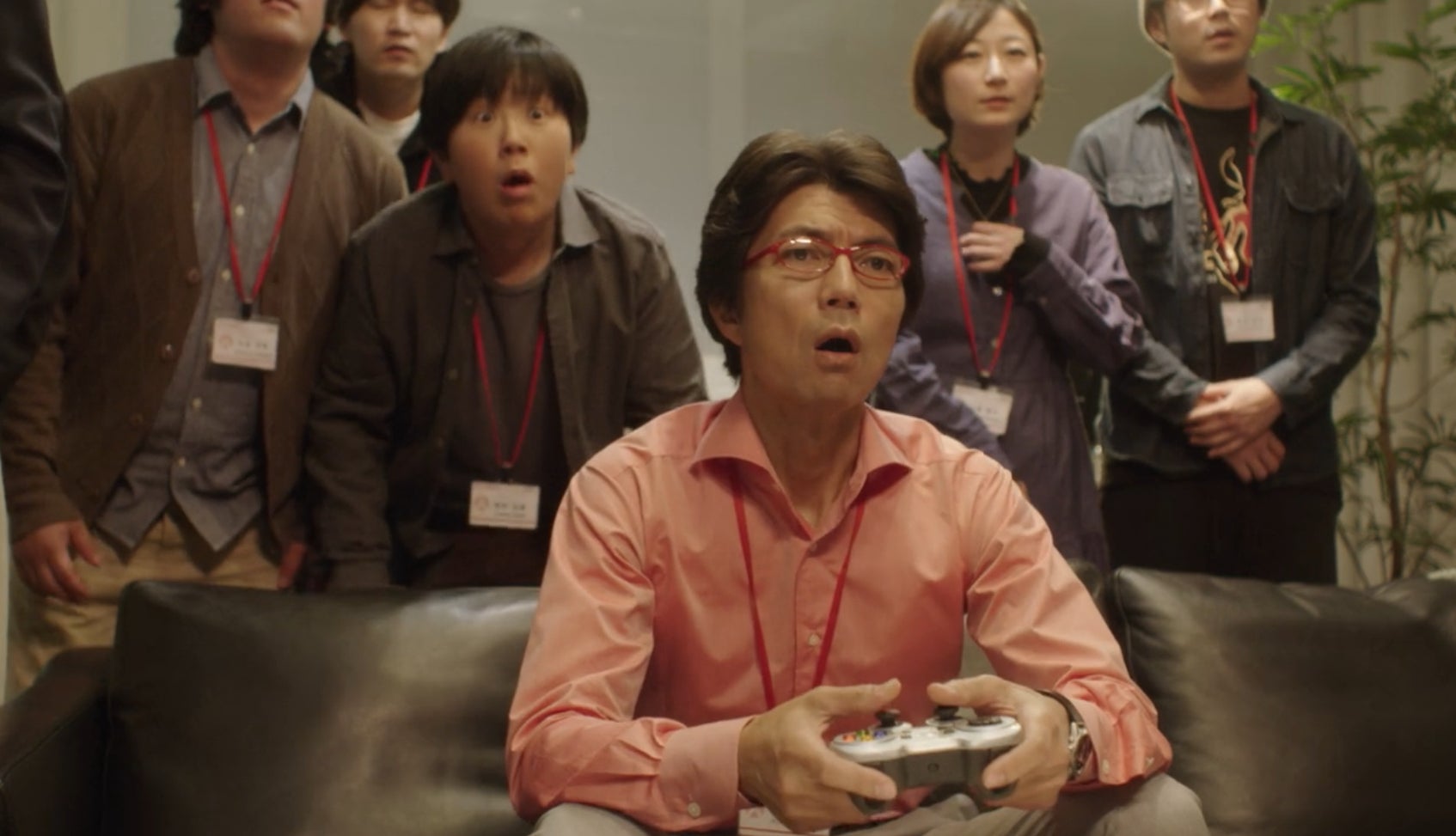 He goes to the diner to have a beer and notices the old woman across from him who’s been going there every day for the past two weeks. Tears form in her eyes as she reveals she’s his mother. She explains the events that led her to abandon him and apologizes. Akai, drunk and upset from work, gets exacerbated by the confession. In a fury, he says, “I don’t have a mother. She can’t call herself a mother, either, because she abandoned me.” His mother nods in plaintive acceptance, pays her bill, and is about to exit. “Red colour suits you well,” she says and leaves.

Akai is torn with emotion, lost in memories of the past. To the Master, he angrily states that he’s lived without parents and doesn’t need one now. 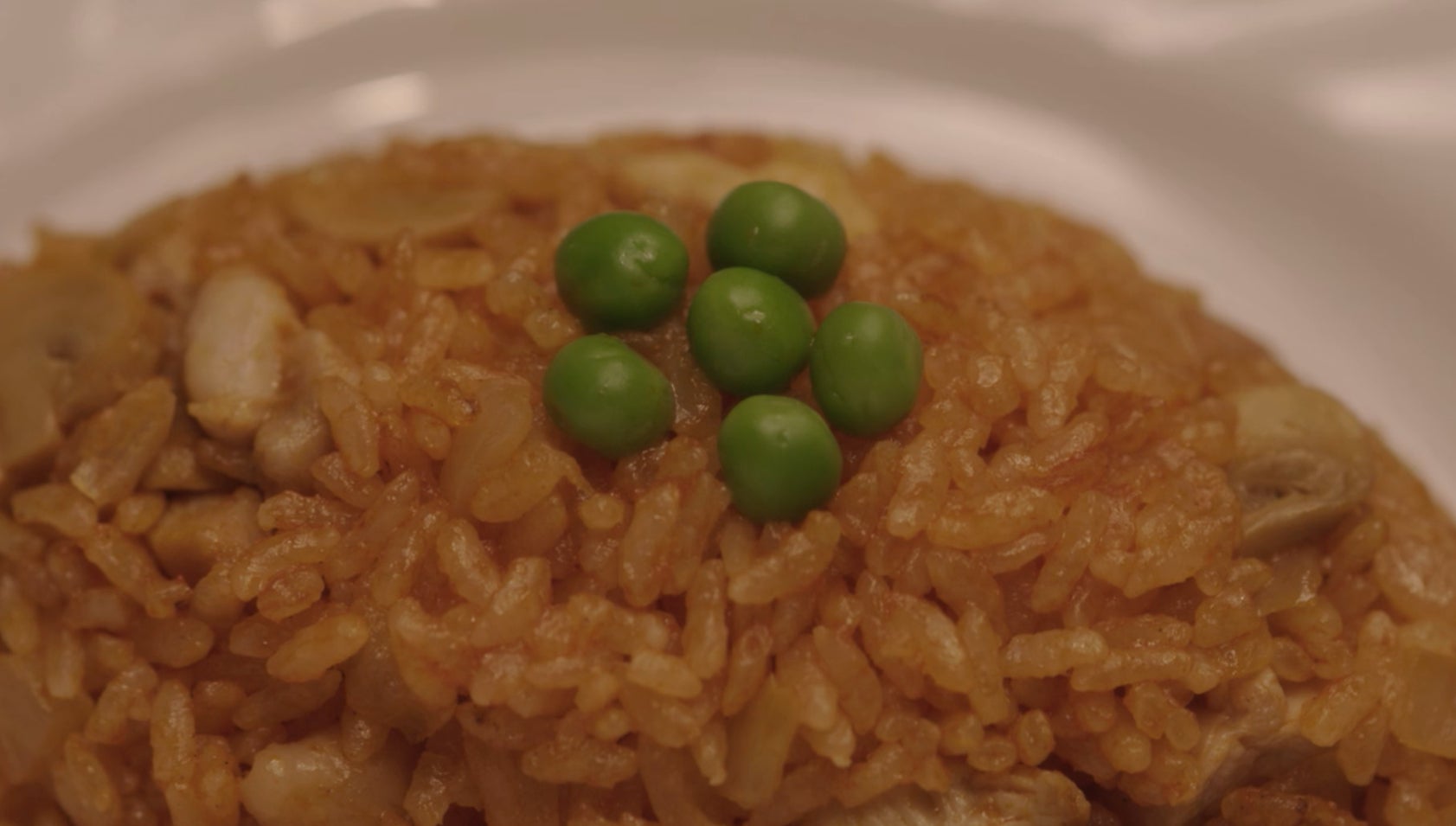 With perfect timing, Master serves up the chicken rice from Akai’s childhood, but this time, he’s arranged the peas in the middle. Akai’s mother had told the Master that Akai hated peas, but would only eat them in that special arrangement when he was a boy. As Akai starts eating the rice, he breaks down, confessing that when he was abandoned, he was found with a red jacket. He wore that red jacket every day “until it was threadbad” in the hopes she’d come back and find him. “I wanted my mother to find me for a very long time,” he says in tears. Red wasn’t really about power. It was about wanting to be found. He’d hoped to find peace in games by escaping reality, but even that had failed him, as indicated by the game-crushing bug.

At the end of the episode, Akai visits his mother’s bar and orders a chicken fried rice. Contrary to what the customer had said earlier, there are reset buttons in life. Akai had found his through food.

This episode resonated with me on so many levels. It made me miss wandering Japan with my wife, finding amazing restaurants and enjoying incredible meals in the most unexpected of places. But it also made me think a lot about family and how people can bring so much pain to each other without meaning to.

There’s only ten episodes per season, and they’re short. All of them have glimpses into key moments in people’s lives and how the food represents something important to them. Sometimes, the episodes are comedic and light-hearted. Often times, they’re tinged in sorrow and pain. There’s usually a twist where someone’s expectation is reversed; whether someone hoping for a relationship gets betrayed, or an irreconcilable relationship finds a detente in a chicken breast with cheese. Some, like this Fried Rice episode, have generally happy endings, while there’s just as many that have a bittersweet conclusion. The customer’s weaknesses, pains, and joys simmer together, accentuated by the Master’s cooking.

Instead of binge watching the rest of the season, I’ll be taking my time with the episodes so I can enjoy them like my late night snacks, savouring each bite, wishing the food could last just a little bit longer.