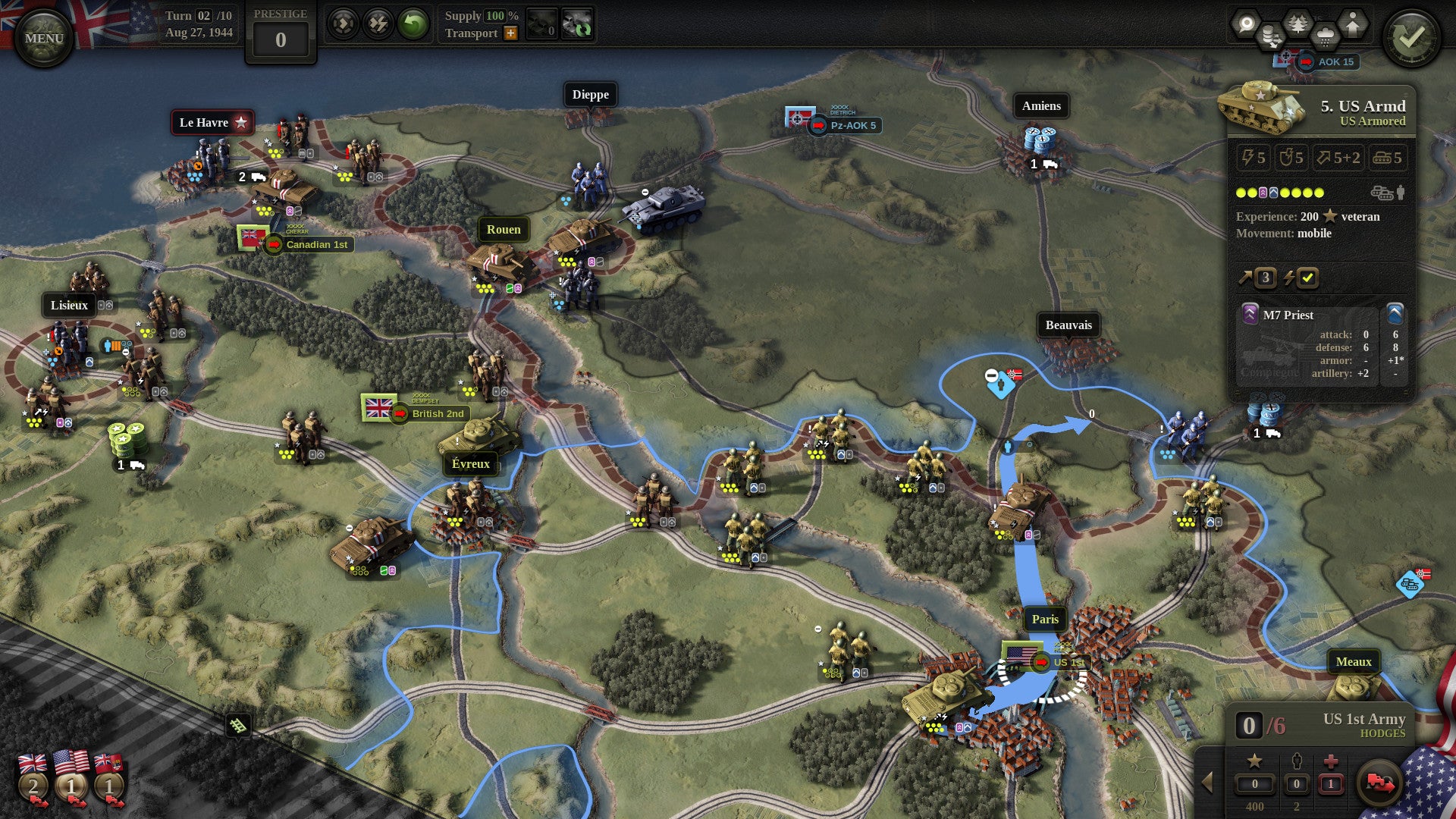 Unity of Command II is definitely at its best on its bigger, more expansive maps, where you’re more free to manouvre and cut through supply lines. Conversely, the cramped maps where every German unit is holed up in a mountain pass, turning missions into dreary slogs, are lowpoints.

The first Unity of Command game was good, and had some very smart ideas on how armies are bound by their logistics, but its limited scope and weird graphical choices held it back a little. Its sequel is a big improvement in almost every respect, and I’m in awe at just how good it is.

If you never played or saw the first game, Unity of Command was a turn-based tactics game set in World War Two in which you could play as either the Axis or Soviets, and throw armies against each other on the Eastern Front. There are a lot of games that do this already—some of them excellent, like Panzer Corps and Order of Battle—so Unity of Command tries something a little different to set it apart.

While its bedrock of movement and combat was fine, what really defined it was the enormous emphasis it placed on supply and logistics. Units had to stay within range of supply depots, and if they strayed, they’d quickly become ineffective. Likewise, troops could be easily cut off from supply lines by flanking moves, and doing so in Unity of Command was as close as a game has ever come to recreating just how catastrophic that can be in an actual war.

I really liked it at release, and said as much in my review, but in the long run it just didn’t have the staying power of some of its contemporaries in the field. This was mostly because once you got past the logistics system it was pretty thin, with little tactical (you could basically only move or attack) or strategic meat to help keep you engaged once the novelty of supply lines wore off.

The sequel had some improvements to make, then, and it’s well and truly made them. First up, and I guess most importantly, the abstract “big head” visuals are gone, replaced by a more traditional view of the game’s units. Infantry now have legs, and bodies, and I know this sounds weird but that’s a game-changer for me, because the longer I spent with the first Unity of Command the more those huge heads started to really bug me.

Next, the supply system has become more involved. It’s still built on the idea of depots spreading supply lines across roads and rail, but there are now extra layers of direct player intervention, as you can build your own depots, move them and assign supplies accordingly. This creates a fantastic balancing act, as the movement of your armies has to conform to your ability to move your supply lines along with them.

Finally, there’s just more to do. At the strategic level you can collect a deck of powerful cards that grant you bonuses during missions, as well as level up your headquarters units, which are vital since your troops won’t be able to use any of their special attacks if they’re not in range of your mobile HQ.

Which sounds a bit abstract, and it is, but let me explain. Unity of Command II only features a handful of unit types, mostly just variations of infantry and armour. Things like artillery, anti-tank weaponry and commandos still exist in the game, but not as standalone units. Instead, you can attach them to your regular forces, after which they let you use special abilities.

Think of it as equipping your units with loot. If you encounter an entrenched position—and this happens a lot in the mountains and bocages of the campaign—a frontal attack with regular infantry will be futile, and a flanking manouvre might take too long. But if your forces have special abilities attached, they’ll have access to unique attacks that can suppress and even dig the enemy out of their position. 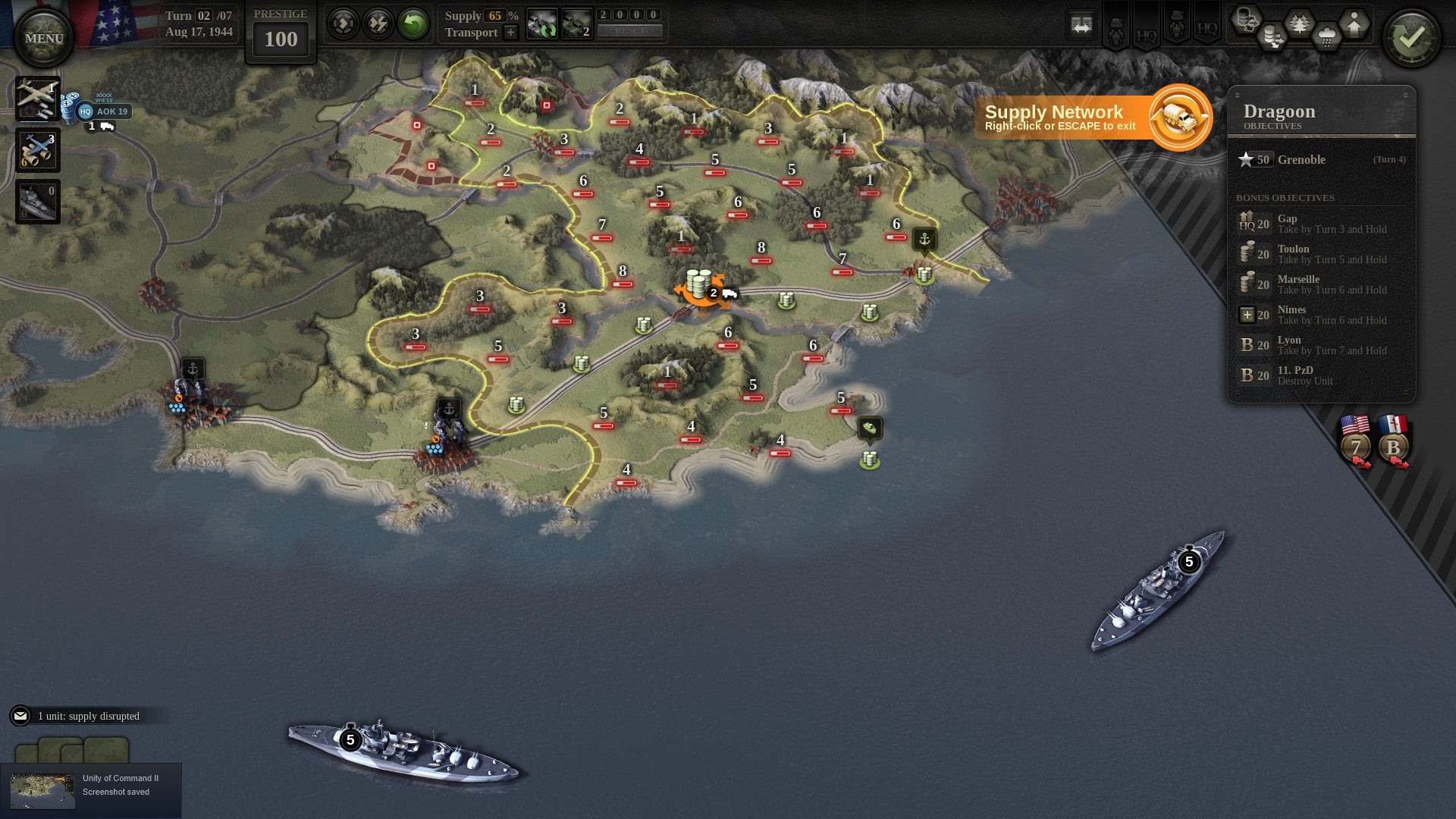 This screenshot shows how the supply system works. Those green barrels are a supply depot, and you can see supply lines branching out from it along roads. Outside of that, the redder the hex, the less likely it is a unit on it will be supplied fully for the next turn.

This all comes together to create the most tactically impressive wargame I’ve played in years. The balance between movement, combat and supply is almost perfect, and it makes every single decision you make, even the most seemingly remote and insignificant, feel important and worth weighing up.

Indeed everything comes together so well that at times the minute-to-minute experience feels less like a World War Two title and more like a puzzle game, closer to Into the Breach or Bad North’s reductive ideas on strategy gaming. Which is cool most of the time, but then every Unity of Command II mission is limited by a very strict turn limit, and that’s when it starts to come unstuck just a little. 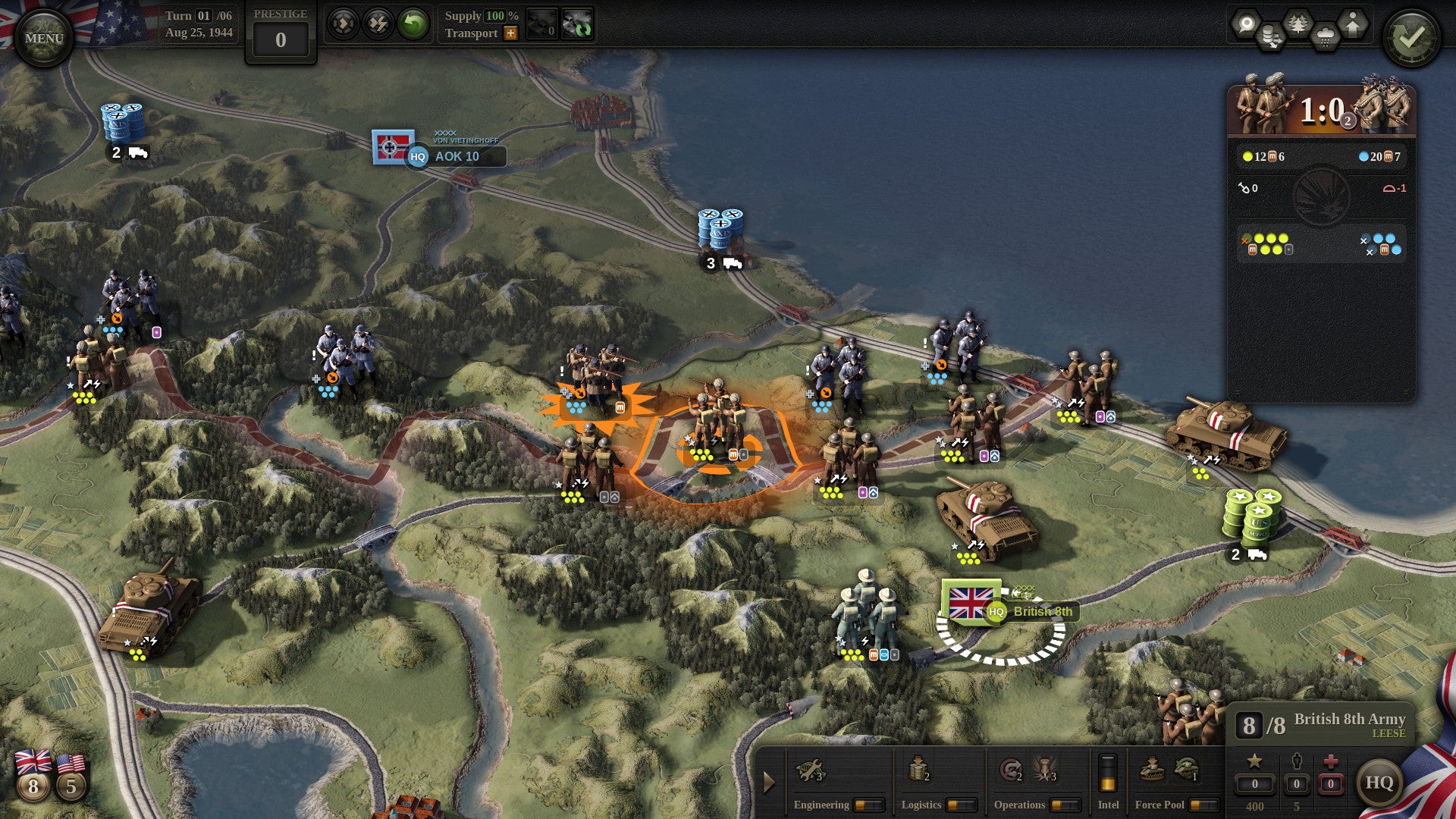 I understand the reason for time limits in games like this, but as someone who likes to really explore a map, I’m not usually their biggest fan. I especially hate Unity of Command II’s though because it’s incredibly strict, and encourages a type of gameplay—throwing units at the enemy so that you just keep on moving—that detracts from the theme and works against some of the game’s best systems, namely the idea you can dig the enemy out of a fortified position if you take the time to assemble the right forces.

My other disappointment was that, for a campaign featuring the biggest and most interesting naval invasions of all time, your ability to control forces outside of your usual roster was surprisingly limited. There are loads of missions where you’re given landing craft and battleships, but only in the most superficial sense. Battleships can’t be moved, and you can’t even get picky with where you land invasion forces, with each offshore unit only able to be unloaded at a handful of predetermined positions. This is a real bummer because in other games of this type controlling those kind of units in those kind of missions were often the best part!

I’d been keeping an eye on Unity of Command II for a while, excited by the changes and additions that had been promised, but I wasn’t expecting something this good. It’s so flexible, so engaging, such a pure and enjoyable expression of turn-based tactics.

Unity of Command II shows that even in a genre as tried-and-tested as this, where so much has remained the same for so long, that there’s room for change that not only interesting, but exciting.

A wonderful balance of movement and supply makes every single move interesting.

Throw that time limit in the trash.

Finished the campaign, which I'm about to restart now that I actually know how the game works.