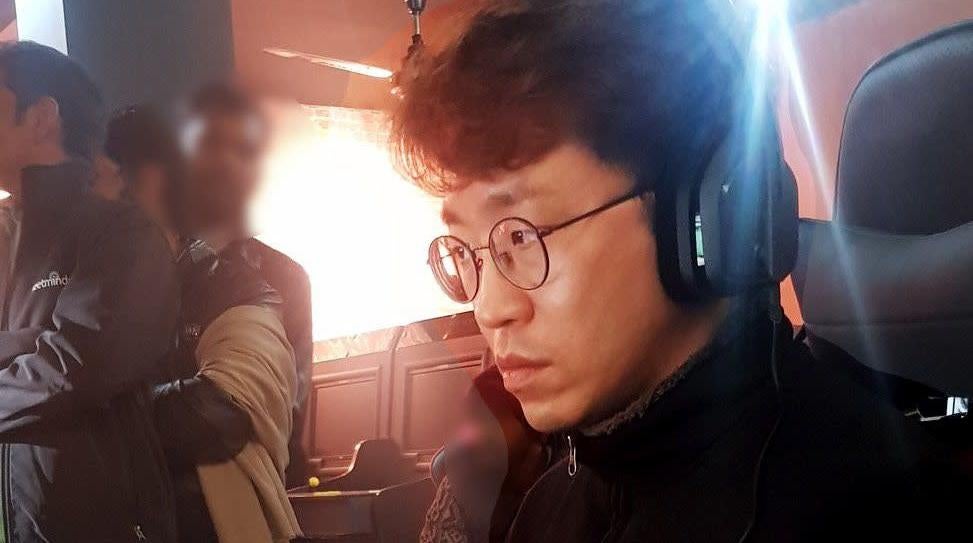 Jae-min “Knee” Bae playing Tekken during his trip to Pakistan (Photo: <a href="https://twitter.com/roxgaming_eng/status/1200324057230536704">ROX Gaming</a>)
To sign up for our daily newsletter covering the latest news, features and reviews, head HERE. For a running feed of all our stories, follow us on Twitter HERE. Or you can bookmark the Kotaku Australia homepage to visit whenever you need a news fix.

Over the last year, Pakistan’s fighting game community has risen from relative obscurity to a place of prominence thanks to a handful of its players winning major Tekken 7 tournaments on the world stage. The country has garnered so much attention, in fact, that South Korean veteran Jae-Min “Knee” Bae travelled there last week to train for the Tekken World Tour finals this weekend. What should have been a simple opportunity for these players to learn from one another, however, became a mini controversy when two of the country’s best avoided playing the South Korean visitor altogether.

It was a no brainer for Knee to visit Pakistan ahead of the upcoming Tekken World Tour finals, both as a way to learn from a country that hasn’t had much representation on a global level and show respect to the local fighting game community for its explosive debut. And the Pakistani players ate it up; Knee was greeted both at the airport and a local game centre with gifts and applause, owing to his legacy as one of the greatest Tekken competitors of all time. What followed was three days of intense competition, during which Knee beat almost everyone who challenged him, including Arslan “Arslan Ash” Siddique, the surprise Pakistani competitor who had previously defeated Knee at both Evo and Evo Japan en route to first place finishes at both events.

Two competitors, however, were conspicuously missing from these proceedings: Awais “Awais Honey” Parvez and Atif “Atif Butt” Ijaz. Both had made names for themselves in the last few months with strong showings at international events like Tokyo Tekken Masters 2019, where they took home the top two spots in a crowded international field. Between Knee’s matches, the fighting game community would speculate as to why they weren’t playing. The answer came from a series of tweets from their sponsor, Genuine Gaming, revealed that the organisation had several misgivings, including the way the resulting content was being branded and the possibility of revealing strategies to a potential Tekken World Tour finals opponent so close to the main event. Genuine Gaming managing director Royce An was particularly vocal on Twitter, saying that Knee had “put pressure” on Awais Honey and Atif Butt to compete.

“Whether Knee knew it or not, the fact that he came to Pakistan was essentially him calling out our players to play him,” Royce told Kotaku via direct message. “If that isn’t pressure to play, then I don’t know what is. Their idol Knee, coming out to Pakistan to play! They know their fans want them to play too, as well as the rest of the world. But most importantly they want to test themselves against Knee. If they don’t play, they look like cowards. Watching Knee demolish their friends was even harder to stand. They wanted to avenge them. But they know that the long-term goal is more important, and playing him now might appease the masses, but won’t help them achieve their ultimate goal, which is to be the Tekken World Tour champion of 2019, 2020, 2021, etc.”

Royce assured me that the decision to keep Awais Honey and Atif Butt from competing against Knee was made both by the players and Genuine Gaming after a discussion of the pros and cons both for the players themselves and the organisation. I have not been able to make direct contact with Awais Honey or Atif Butt to confirm these details. They appeared very supportive of Knee’s visit, sharing links to the stream and clips of their fellow Pakistani competitors facing off against the South Korean legend.

Welcome to Pakistan @knee
It's an honor for us to have to in Pakistan
Looking forward to meeting you https://t.co/nxu6oZhIt6

Another point of contention on Genuine Gaming’s part had to do with Knee’s sponsor, ROX Gaming of South Korea, allegedly surprising them with this visit to Pakistan and laying claim to all content recorded streamed or recorded during his trip. Royce said efforts were made to contact ROX Gaming by way of a third party, but they never heard back. The venue for these matches, Maniax Gaming Hub, became an official partner of Genuine Gaming in November, and while Royce believes they would have been justified in disallowing the use of the space and streaming equipment for Knee’s visit, the organisation ultimately decided to let it go in order to spotlight the rest of the Pakistani fighting game community.

Speaking to Kotaku over email, a ROX Gaming representative said they never received any communication from Genuine Gaming about the situation and seem to have had no idea there was any controversy at all.

“We understand their situation, but there was no official discussion, not a word,” the ROX Gaming rep explained. “As we are aware of the situation, there was no discussion with Knee either. It was purely Knee’s practice trip. He just wanted to play. It’s true, Knee would have loved to play with [Awais Honey and Atif Butt] for pure practice, but he didn’t care if it was not possible since he was enjoying [his visit] so much. Knee loved the warm welcome that he had in Pakistan and wants to go back sometime.”

While the arrival of big money sponsorships has certainly complicated the simple act of competition in the fighting game community, holding back against an opponent or dodging them altogether before a major tournament is a practice stretching back into the arcade days. “Save that shit for nationals” was a popular phrase among top players looking to keep certain strategies secret for more important competitions, especially those with money involved. As the winner of the Tekken World Tour finals is set to take home over $US30,000 ($43,854), it comes as no surprise that players in Awais Honey and Atif Butt’s positions wouldn’t want to reveal any of their tactics to Knee, even during a friendly visit to their country. Still, this decision didn’t sit well with some in the community, and I’ll admit to being a little disappointed in the decision myself. I suppose that’s a side effect of this new esports-focused era, where competition can often take a back seat to business-related concerns.

“Awais and Atif do play other characters, which they could’ve used to gather information, but playing Knee using secondaries we felt would be even more disrespectful to him,” Royce said. “If the players want to play against Knee, they want to play using their mains. They want to save the show, as well as their tactics, for the Tekken World Tour finals. These guys are world class competitors, [and] the drive to win is in their blood. It’s not smart to give a window of opportunity for an opponent like Knee to download anything. Knee is a legend for a reason, you need to respect that. Our decision not to play is because we respect Knee, not because we don’t.”