In Afterparty, You Die As You Lived: Confused But Happy To Take A Beer

Afterparty, the latest from Oxenfree developer Night School Studio, is out October 29 (and rated M for Mature, like all the best night clubs). It’s a story-based adventure game written in the snarky spirit of its point-and-click predecessors, full to bursting both with witty one-liners and signs that the writers maybe got a smidge too attached to some of the pop culture and philosophy references they penciled in. It’s a touch overdone, but games of this genre tend to be indulgent by nature. For the most part, it’s real good, knuckleheaded fun.

This story was originally published on October 28, 2019, and it’s appearing again following the game’s re-release on Switch. Lola and Milo are recent college graduates, and they are also dead. Playing as the pair of them, you’re trying to find a way to escape hell while figuring out exactly how they died and why they’re in hell in the first place. In Afterparty’s vision of eternal damnation, demons are stuck in a cycle of bureaucracy and partying that none of them are too thrilled about. Humans are tortured, but only during the demons’ regular business hours, after which they’re free to go out partying and get fucked up—aside from the occasional visit from their Personal Demon, who appears with the regularity and convenience of a menstrual period. So that’s exactly what Lola and Milo do, soon discovering that they can escape hell if they outdrink Satan himself. The path to drinking Lucifer under the table largely involves schmoozing with people (the enjoyable part) and playing the occasional drinking game (as in real life, more fun on paper than in practice). Honestly? There’s not much puzzling or figuring out of things to do. The real draw is messing around in the dialogue trees, seeing what happens if you do something silly or illegal, also as in real life. The awkward Milo and dry Lola weren’t particularly popular in college, and it’s obvious that navigating the deer-in-headlights feeling of trying to break into a new social scene is not their forte. With a backdrop of lush, hellish backgrounds and a vibrant nightlife, Afterparty does a great job of capturing the relentless string of anxiety-inducing moments you experience on a night out, from waiting in a stupidly long line to the pathetic shame of trying to parley with a dead-eyed bouncer. 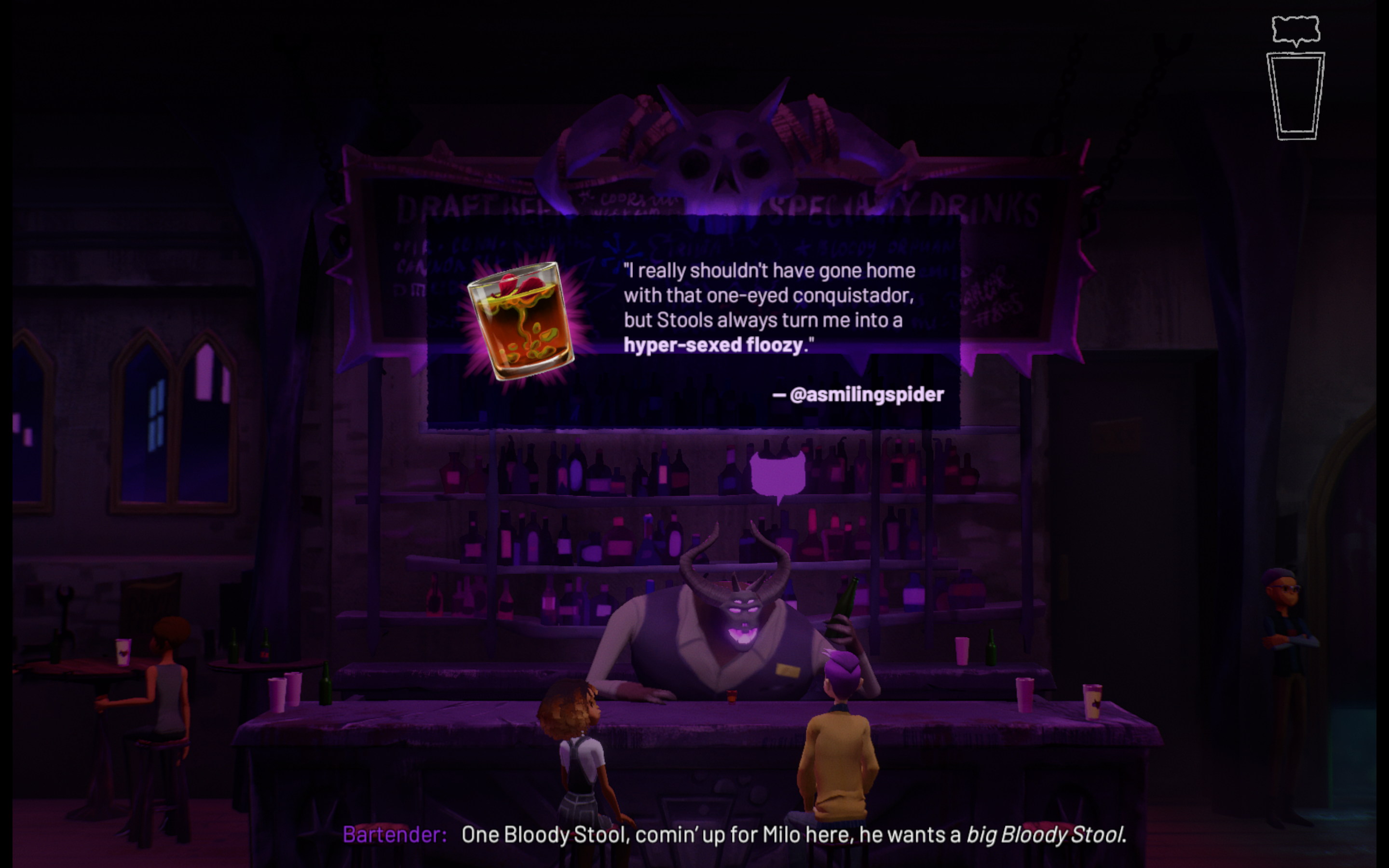 You get a constant stream of dialogue options to choose from, but what shakes things up is alcohol. Drinking in Afterparty unlocks different dialogue options, depending on the specific cocktail. There’s the Bloody Stool, which gives the “Flirty Floozy” effect, or the Famous Last Words, which gives you the bold, unhinged bearing of a “Prison Bully.” It was a blast to see what different drinks unlocked in different situations. Lola gets hilariously mean when she’s belligerent, and Milo’s unyielding awkwardness somehow blends into everything he does. There’s also the fact that Lola and Milo keep having to make choices which could literally damn other humans’ souls for all eternity, making these choices equally fun and fucked up. 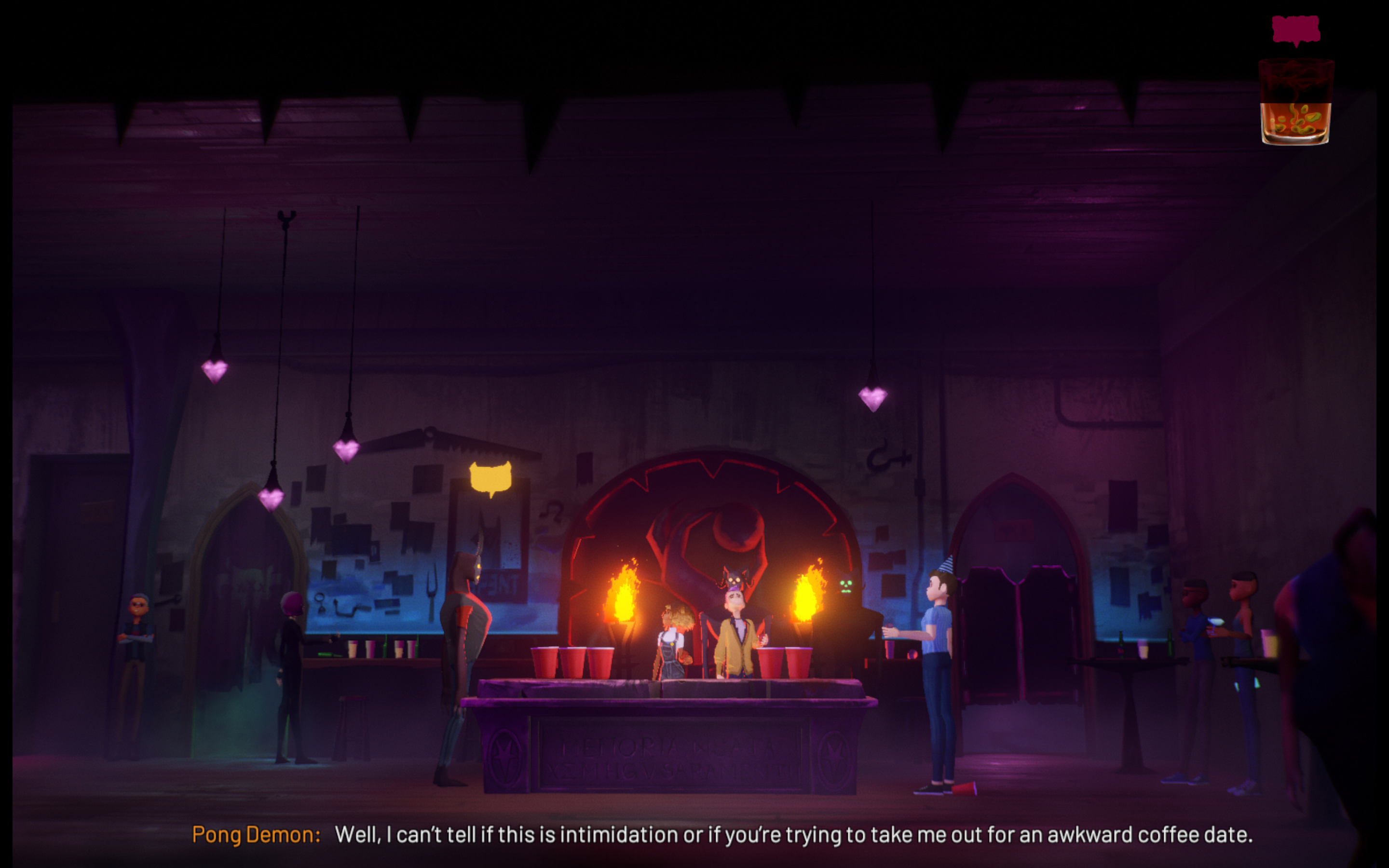 What really ties the package together is the voice cast, who do a great job of striking a balance between hammy and conversational. I’m always a sucker for people who can affect a naturalistic tone with patently silly lines, and the delivery mixed with the audio editing make for some pretty funny moments. The hapless Milo (Khoi Dao) continually gets cut off midsentence and roasted by bored, petty demons. Janina Gavankar’s deadpan works great on realist Lola, a bright, probably depressed young black woman who walked away from the church, much to her family’s dismay. I found her incredibly relatable. 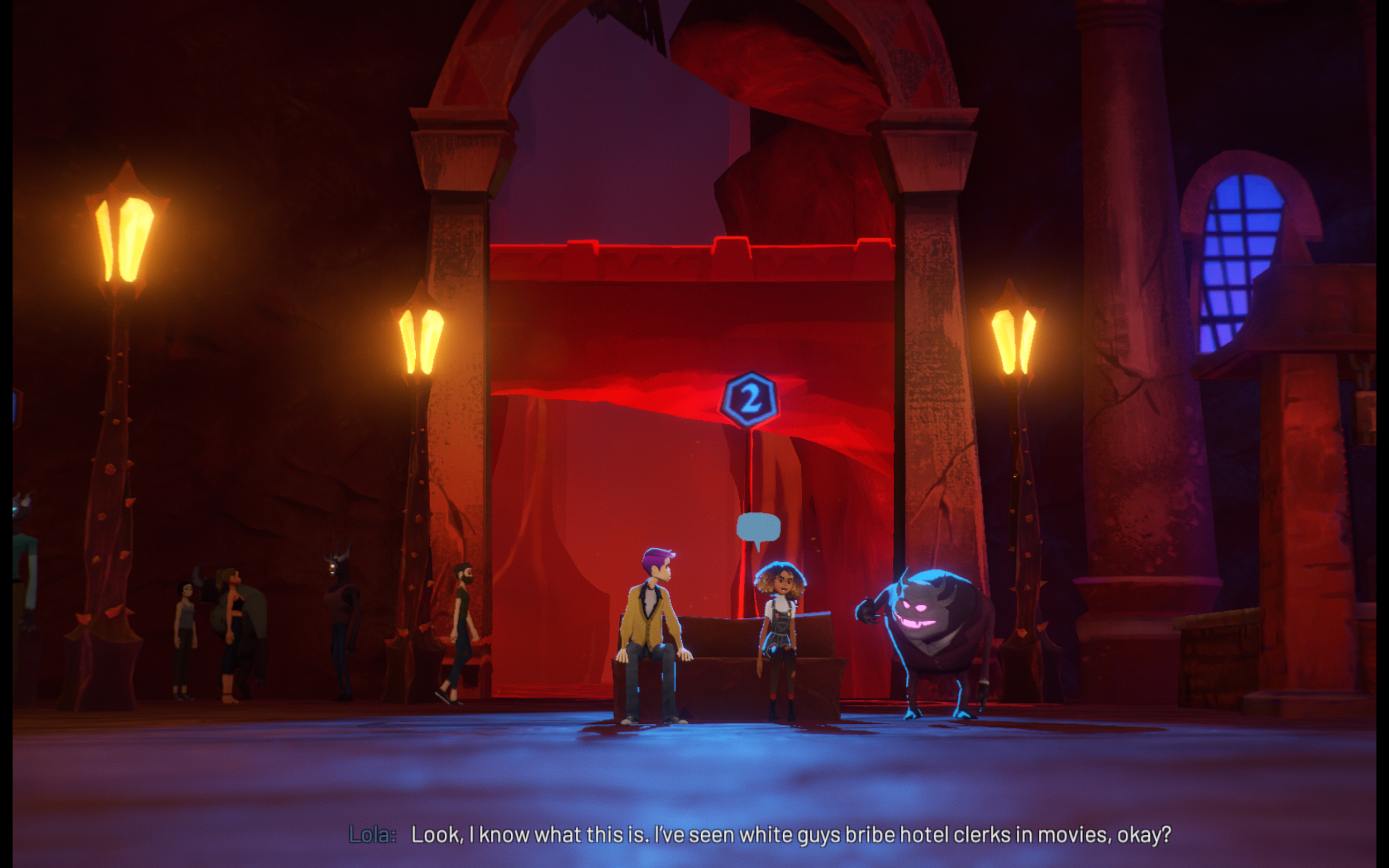 Another draw is the fact that you can choose branching quest paths that allow you to take different approaches to completing your goals. In one playthrough, I decided to help demon Fela instead of human Lynda, and Milo and Lola’s Personal Demon reveled in rubbing that in their faces. The Personal Demon’s recaps add a lot to Afterparty’s replayability, and one character even quips about worrying about something on a second playthrough. The self-referential humour is a little heavy-handed in places, but I couldn’t help chuckling. Unfortunately, here’s how I know about the branching options: I initially played on an uncustomized 2019 13-inch Macbook Pro. In addition to not being able to open one of Afterparty’s pause menus without it crashing, there were two separate times where I couldn’t progress as a necessary dialogue option didn’t show up. One case happened toward the beginning, and one happened closer to the midgame. Night School has told Kotaku it’s aware of these bugs and says it’s working to fix them before release. Anyway, I’ll help all seven of you who are foolish enough to consider doing this like I did: Don’t buy this on macOS, if you can help it. 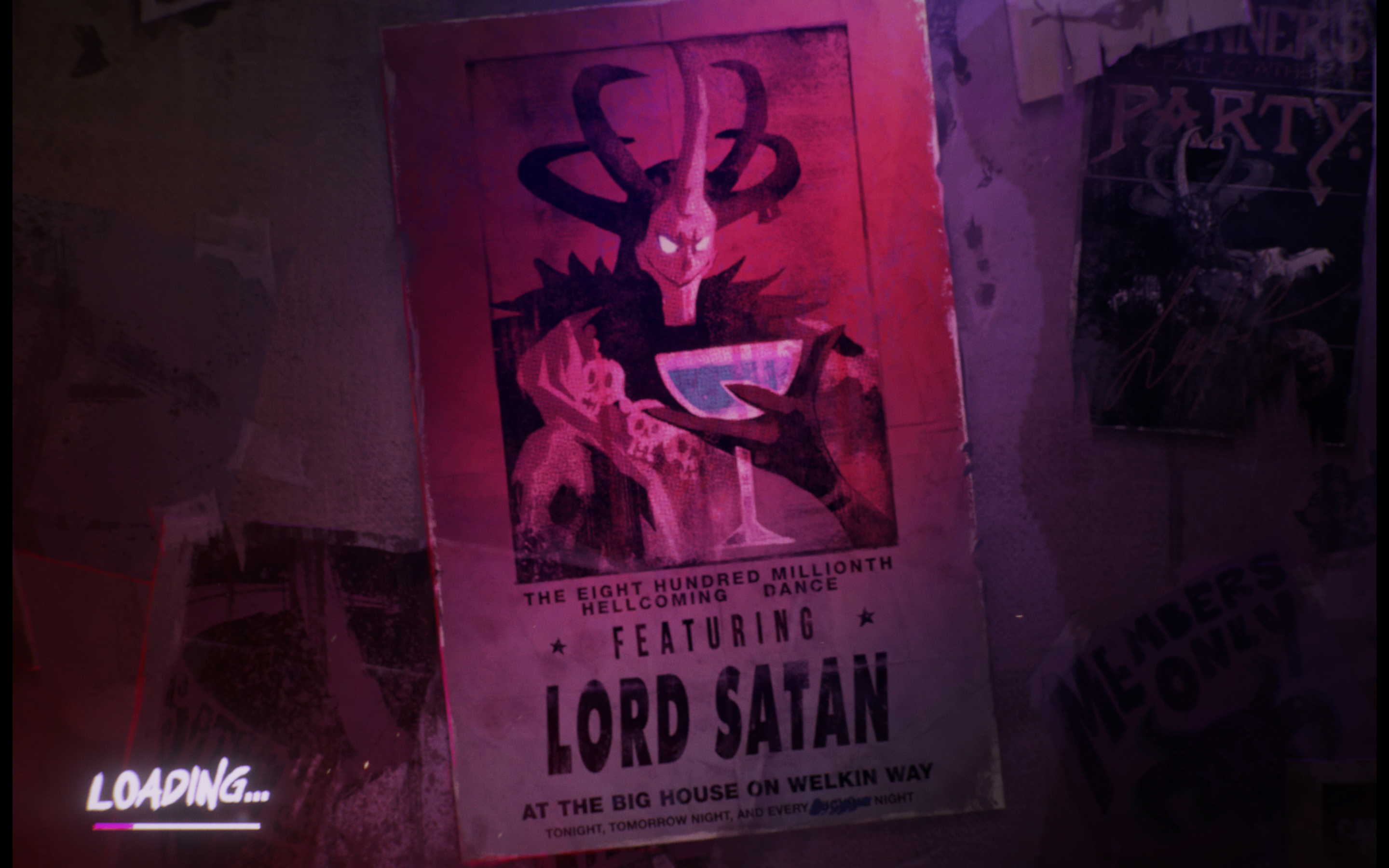 Afterparty runs much more smoothly on my PlayStation 4 Pro but still has issues. When I replicated what caused the Macbook issue on my console, I encountered some bugs that got me stuck in a dialogue or drink ordering menu. Some went away after I waited, but others, like the cocktail menu freezing, persisted until I reset the game, which was frustrating. I ultimately wasn’t able to order a cocktail in the game’s first bar sequence on PS4. These bugs were easier to bypass than the ones on the Macbook, but they were still disruptive. Bugs notwithstanding, there’s a lot to like about Afterparty if you’re into games of its ilk. Like many games driven by writing, it toes the line of pretension, but it’s also too self-aware and too full of dick jokes to discount for that. Admittedly, slogging through the pits of hell on foot got a little bit tedious at times, but that’s a small, picky gripe. I haven’t completed it yet, in part because of the bugs, but I’ve greatly enjoyed what I have seen and am hoping the day-one patch will make the game more playable. I’d really like to see if my horrible choices affect the endgame. Just like real life.