40,000 DC Comics From A Single Unprecedented Collection Are Being Auctioned 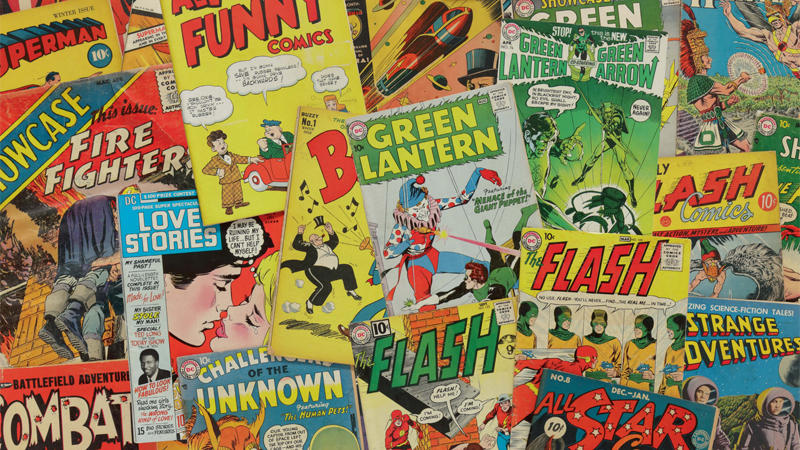 Just a sample of the 40,000-strong DC Comics collection that...<em>could</em> be yours? If you have crazy amounts of money? (Image: DC Comics/Sothebys)

There are many epic comic book collections out there, but few have garnered intrigue and infamy quite like the Ian Levine collection”alleged to be one of the few complete collections of DC’s comics from its very beginnings in 1935. Now it’s no longer not just alleged, but going up for sale to the highest bidder.

Sotheby’s has announced a private sale of Levine’s comics collection going live this week, bringing together over 40,000 comics that covers the origins of DC Comics before it even had that name”with February 1935’s The New Fun: The Big Comic Magazine, published by DC’s predecessor National Allied Publications”all the way up to the 21st century (2014 to be exact), the first 80 years of DC’s comic book history.

The collection isn’t just expansive, but rare for its comprehensiveness: It offers an unprecedented level of access to DC’s comics history, from rare icons like Action Comics #1 and Detective Comics #27, all the way to complete runs on DC’s stalwart series of the golden and silver ages, and beyond.

Levine himself is almost as interesting a figure as the comics collection. A music producer in the UK, he’s perhaps more famous in sci-fi fandom circles for his relationship with Doctor Who. A diehard fan during the show’s classic era, Levine was at the forefront of fan campaigns to keep Doctor Who on the BBC when it first faced cancellation in the 1980s, and since then has made a name for himself with efforts to return episodes of the show missing from the BBC’s archives, while also providing knowledge and insight for many special features included on the company’s home releases of classic Doctor Who.

The fact that Levine was also an avid collector of comics was almost a side-story to his impact on Doctor Who fandom”even though his collection, so comprehensive as it was, helped provide source material for Paul Levitz’s DC 75th anniversary history book 75 Years of DC Comics: The Art of Modern Mythmaking. But now, after Levine spent decades amassing it, someone else is going to get their hands on a treasure trove of comics history.

Speaking of treasure troves, you’ll probably need one as big as Scrooge McDuck to get your hands on this collection”Sotheby’s is auctioning the Levine Collection in a private sale and is doing so as an individual slot. You can’t pick an issue or two to bid on. What you see, is what you get.

And what you get is eight decades worth of comics. I’d say someone’s about to get a hell of a to-read pile, but that stuff’s probably going in a very, very big and well-protected vault never to be touched after it’s sold. Instead of seeing what your chances are of chipping in, you can go here to read a PDF catalogue covering the collection from Sotheby’s.