Doom Eternal’s Soundtrack Has Been A Trainwreck 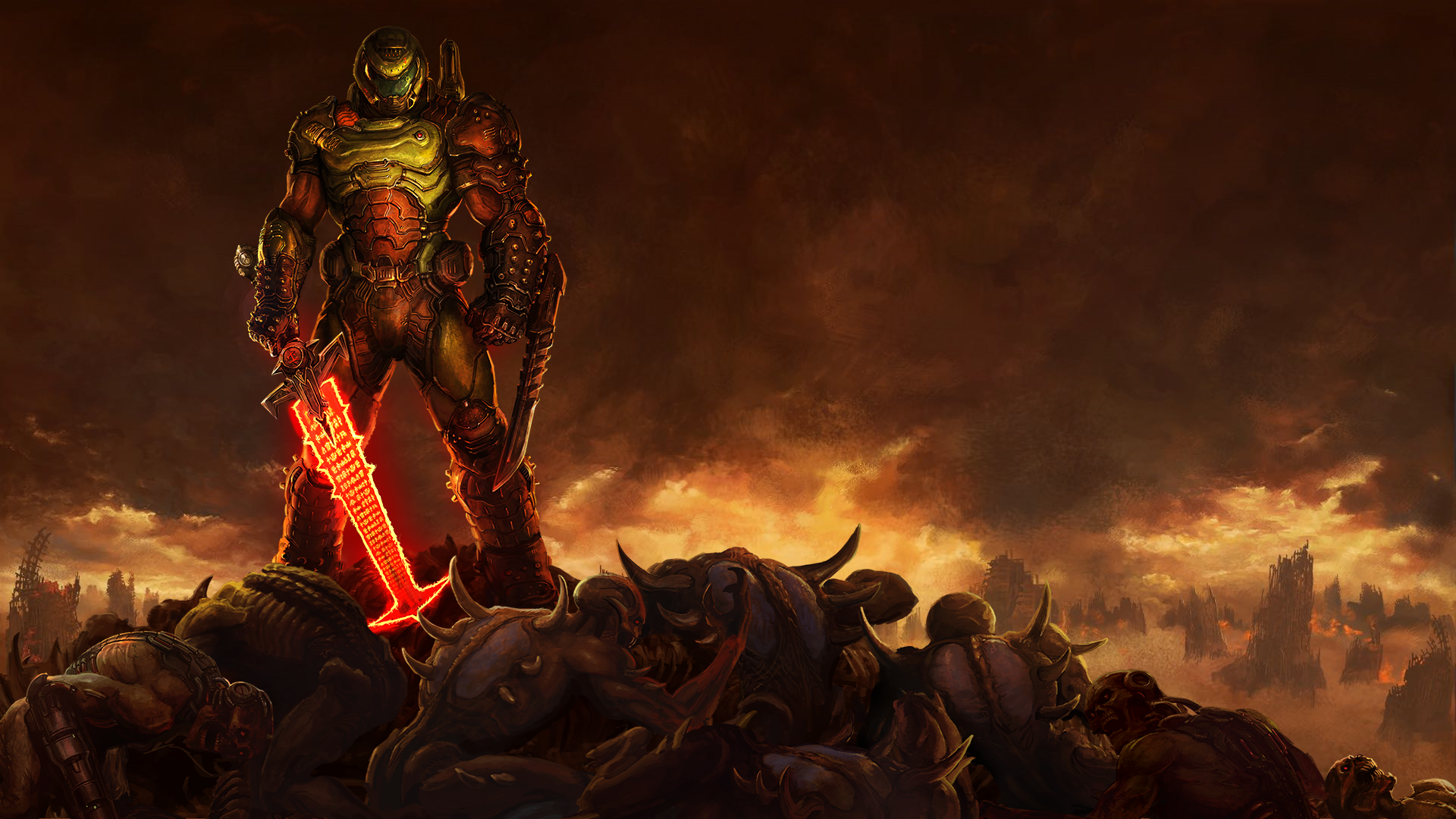 A video game soundtrack release is normally a pretty straightforward thing, but Doom Eternal’s 59-track OST has found itself mired in controversy as the game’s composer and publisher Bethesda are at odds over the quality and composition of much of the score.

The story begins last month, when the album was released (after some delays) only for fans to start wondering why so many of the tracks sounded “flat” when compared to the brutal, crunchy-sounding riffs in the game’s heavy metal soundtrack. Composer Mick Gordon was quick to publicly distance himself from this:

Here's a comparison between the original BFG Division from Doom 2016's official soundtrack (left) vs. the BFG 2020 remix on Eternal's soundtrack from today (right).

Notice how the wavelengths in BFG 2020 form a nearly perfectly straight bar vs. the original with more definition pic.twitter.com/TCJRdOe1Yf

I didn't mix those and wouldn't have done that. You'll be able to spot the small handful of tracks I mixed (Meathook, Command and Control, etc…)

His disparaging words about the game’s soundtrack can even be traced back to January, when he commented on this fan’s YouTube cover: “Fun Fact: All those stupid “time signature changes” are a result of someone from marketing piecing this track together without any musical knowledge.”

Fan complaints rumbled on for a few more weeks, culminating in “direct and personal attacks” against id’s lead audio designer Chad Mossholder, the person credited on the tracks fans have had complaints with.

Coming to the defence of Mossholder, and the entire process behind the creation of the soundtrack, id’s Marty Stratton, the lead producer on Doom Eternal, has today posted a long statement on Reddit outlining id’s side of the story, and providing their reasons why Gordon’s contributions on the soundtrack are limited.

It’s a surprisingly detailed report, alleging that the soundtrack’s release had to be delayed multiple times due to Gordon’s failure to submit his music on time, that Gordon and Mossholder had agreed to work on the soundtrack together to ensure more tracks could be included, and that while Gordon was upset that Mossholder was being credited as a “co-composer”, he was in fact only listed as a “contributing artist” to help fans differentiate between the tracks submitted by Gordon and those done in-house by id.

Here’s a passage covering some of the most important stuff:

At E3 last year, we announced that the OST would be included with the DOOM Eternal Collector’s Edition (CE) version of the game. At that point in time we didn’t have Mick under contract for the OST and because of ongoing issues receiving the music we needed for the game, did not want to add the distraction at that time. After discussions with Mick in January of this year, we reached general agreement on the terms for Mick to deliver the OST by early March – in time to meet the consumer commitment of including the digital OST with the DOOM Eternal CE at launch. The terms of the OST agreement with Mick were similar to the agreement on DOOM (2016) in that it required him to deliver a minimum of 12 tracks, but added bonus payments for on-time delivery. The agreement also gives him complete creative control over what he delivers.

On February 24, Mick reached out to communicate that he and his team were fine with the terms of the agreement but that there was a lot more work involved than anticipated, a lot of content to wade through, and that while he was making progress, it was taking longer than expected. He apologised and asked that “ideally” he be given an additional four weeks to get everything together. He offered that the extra time would allow him to provide upwards of 30 tracks and a run-time over two hours – including all music from the game, arranged in soundtrack format and as he felt it would best represent the score in the best possible way.

Mick’s request was accommodated, allowing for an even longer extension of almost six weeks – with a new final delivery date of mid-April. In that communication, we noted our understanding of him needing the extra time to ensure the OST meets his quality bar, and even moved the bonus payment for on-time delivery to align with the new dates so he could still receive the full compensation intended, which he will. In early March, we announced via Twitter that the OST component in the DOOM Eternal CE was delayed and would not be available as originally intended.

It’s important to note at this point that not only were we disappointed to not deliver the OST with the launch of the CE, we needed to be mindful of consumer protection laws in many countries that allow customers to demand a full refund for a product if a product is not delivered on or about its announced availability date. Even with that, the mid-April delivery would allow us to meet our commitments to customers while also allowing Mick the time he had ideally requested.

As we hit April, we grew increasingly concerned about Mick delivering the OST to us on time. I personally asked our Lead Audio Designer at id, Chad, to begin work on id versions of the tracks – a back-up plan should Mick not be able to deliver on time. To complete this, Chad would need to take all of the music as Mick had delivered for the game, edit the pieces together into tracks, and arrange those tracks into a comprehensive OST.

It is important to understand that there is a difference between music mixed for inclusion in the game and music mixed for inclusion in the OST. Several people have noted this difference when looking at the waveforms but have misunderstood why there is a difference. When a track looks “bricked” or like a bar, where the extreme highs and lows of the dynamic range are clipped, this is how we receive the music from Mick for inclusion in the game – in fragments pre-mixed and pre-compressed by him. Those music fragments he delivers then go into our audio system and are combined in real-time as you play through the game.

Alternatively, when mixing and mastering for an OST, Mick starts with his source material (which we don’t typically have access to) and re-mixes for the OST to ensure the highs and lows are not clipped – as seen in his 12 OST tracks. This is all important to note because Chad only had these pre-mixed and pre-compressed game fragments from Mick to work with in editing the id versions of the tracks. He simply edited the same music you hear in game to create a comprehensive OST – though some of the edits did require slight volume adjustments to prevent further clipping.

Stratton closes his post by saying that id won’t be working with Gordon on Doom Eternal’s upcoming DLC, while wishing him the best for the future:

As for the immediate future, we are at the point of moving on and won’t be working with Mick on the DLC we currently have in production. As I’ve mentioned, his music is incredible, he is a rare talent, and I hope he wins many awards for his contribution to DOOM Eternal at the end of the year.

I’m as disappointed as anyone that we’re at this point, but as we have many times before, we will adapt to changing circumstances and pursue the most unique and talented artists in the industry with whom to collaborate. Our team has enjoyed this creative collaboration a great deal and we know Mick will continue to delight fans for many years ahead.