The Best Multiplayer Games To Play With Your Kid

It’s fun to play games with your kid, but eventually you have to face how much they suck at them. Children’s developing brains can’t handle complexity, their unripe nervous systems don’t react fast enough to not get smeared by zombies, and their fine motor skills are straight garbage.

But don’t worry, parent. There are a ton of super-fun video games that smooth out differences in skill levels between adults and kids so everyone can have fun. Below is my list of the perfect games to play with kids of any age.

The World Health Organisation recommends you wait until kids are least two years old to let them play any video game, but that’s just because they don’t understand the joy and bonding of playing Guitar Hero or Rock Band with a newborn.

Here’s how you do it: Strap your kid into one of those baby slings, plug in your guitar-controller, and rock the hell out. Babies love being swayed gently to sleep while nestled against their mum or pop, and playing Guitar Hero while you do it removes tons of fidgety-baby-time boredom.

Plus, your kid will always associate Cheap Trick’s “Hello There” with warm parental bonding and never quite understand why. 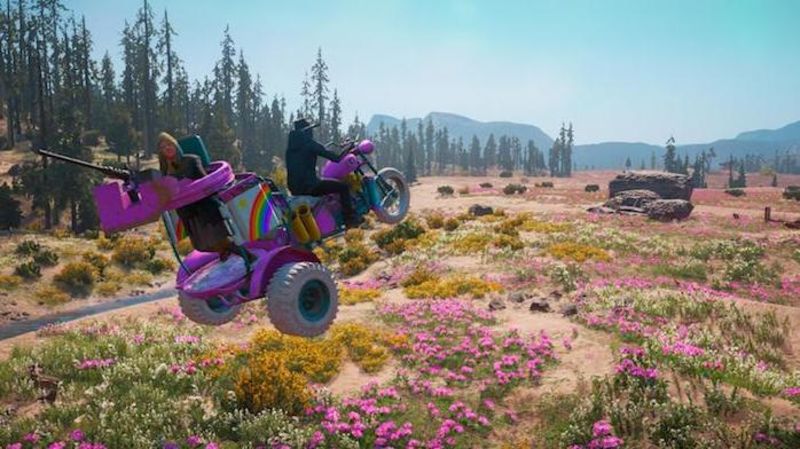 When your child is old enough to take an interest in actually playing games, you might think all your playing will be relegated to the kinds of horrible, boring games designed for toddlers. Not so! After enduring as much Elmo’s Happytime Alphabet Adventure as you can stomach, plop your kid next to you on the couch and fire up an open-world game like Grand Theft Auto 5 or Red Dead Redemption. These kinds of games can be incredibly, awesomely violent and socially irresponsible, but only if you choose that path.

Nothing stops you from setting a good example by obeying every traffic signal in Liberty City or horseback riding around the Old West picking flowers with your kid. (Check out my “Dad Mode” guides to Red Dead Redemption 2 and Far Cry New Dawn for further instruction.) 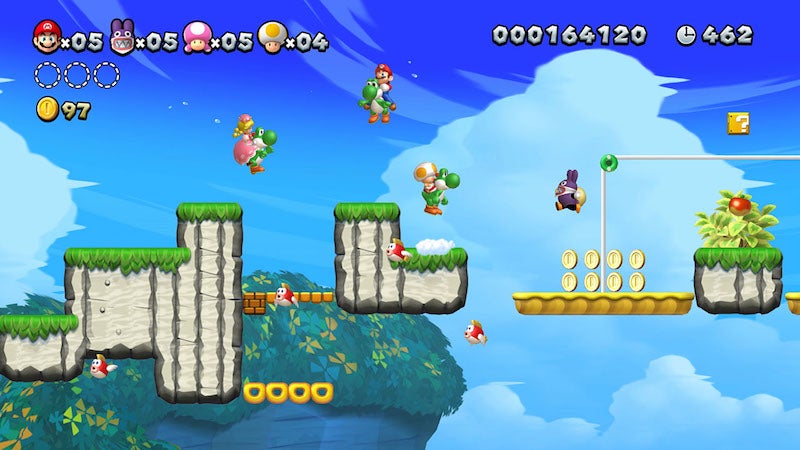 Once your kid is around age four, you can get into real gaming, and there’s no better place to start than New Super Mario Bros. U Deluxe. Nintendo 2D platformer for the Switch is not only a terrific game; it has a ton of options that smooth out difficulty for different experience levels.

Among the game’s five playable character are Toadette, whose floaty jump makes things easier, and Nabbit, a purple rabbit that lets really bad players skate on difficult levels. Nabbit is invulnerable to enemies, so while you’re showing off the platforming skills you’ve been building since you played “Popeye” in the arcade in 1982, your little one can join you on easy mode with Nabbit.

If even Nabbit is too hard for your kid — he can still fall into pits and whatnot — New Super Mario Bros. U Deluxe gives players the option of hitting a button to hide in a little bubble and become totally invulnerable while the parent gets you through the level. It’s so easy, even my wife sometimes doesn’t die. (Sorry, Robyn.) 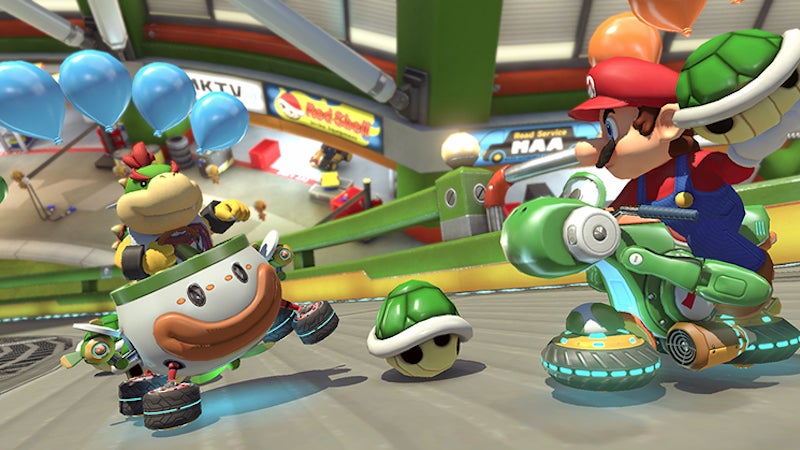 Once your kid is a functional enough human to know their way around a controller, it’s time to introduce competitive play, and Mario Kart is the perfect series for that.

These wild racing games are designed so that anything can happen, and it’s so ridiculously over-the-top that no one gets mad (unless someone deliberately chooses the Rainbow Road map). Last place racers get more powerful item drops than race leaders, so the frontrunner and loser switch places frequently.

There’s enough skill involved that it won’t be a totally random outcome either; and by now, your kid should be getting good enough at gaming that this will matter.

Ages 8-10: Lara Croft and the Guardian of Light 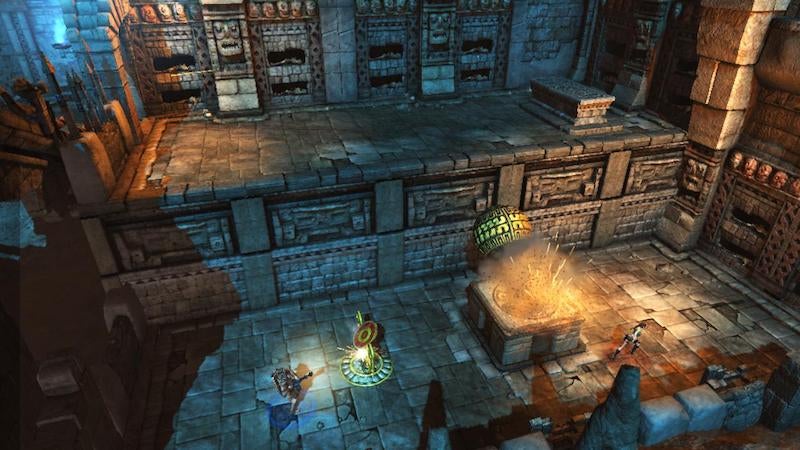 Image: Lara Croft and the Guardian of Light

My son was so crazy about this co-op, arcade-style spin-off of the Tomb Raider franchise that he dressed as Lara Croft for his third-grade class’s “Dress as Your Favourite Fictional Character Day.”

Guardian combines fast-paced, not-bloody combat action with puzzle-solving and exploration. Each player’s character has different abilities, so to solve puzzles together, you have to help each other out, and the combat allows a better player to shield and protect a worse one without it being too obvious. 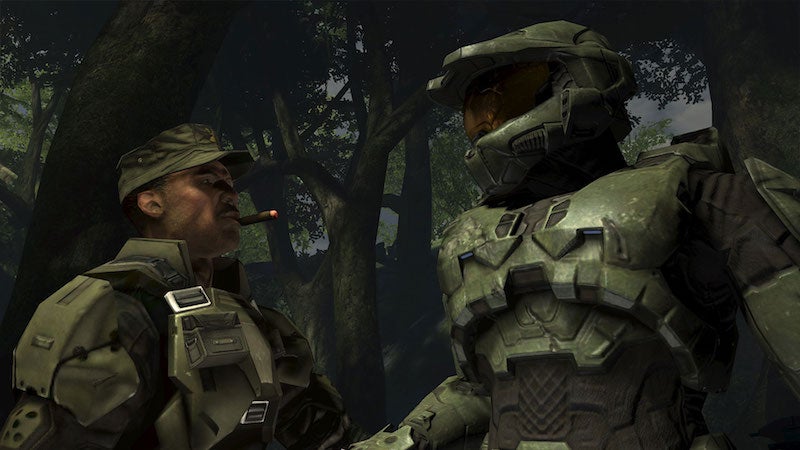 It was around my kid’s 11th birthday that I realised he was getting good enough at games for us to square off in a first-person shooter. I chose Halo 3 because it’s amazing, and it’s not overly super-blood-and-guts violent.

At first, I guided him along in Halo 3’s main plot, played co-op style; and then we dropped into a few one-on-one death matches. Of course, I let him win at first, about half the time. But soon I stopped letting him do anything and he still managed to beat me sometimes.

Before long, he won practically every time we played. I mean, like shutting me down totally, sniping me from across the map, slamming me with that horrible gravity hammer, etc. But I eventually rose to the challenge and got good enough to win about half the time. I felt pretty proud of myself… until I realised he was now letting me win! It was like that “Cat’s in the Cradle” with tea-bagging.

Then I stopped playing Halo with him because it made me too angry.

Once your kid is over age 12 or so, they’ll probably be able to beat you at any game, and they’ll understand the controls faster than you, and they’ll grab all the damn power-ups even though you need the machine guns! Plus, they’ll want to play some damn thing that you barely even understand what it is.

So it’s time to re-assert your parental dominance. There are two ways to do this. You can download whatever game you used to play in the arcade as a kid. For me, it’s Joust. You will be still great at it and your offspring will get tired of playing it with you before his/her skills surpass yours.

Another avenue: Turn on something like Jackbox Party Pack, a trivia-based game in the You Don’t Know Jack series that contains five general knowledge-based mini-games. Your child will only play with you out of pity, but you will excel at these games because you are old, and remembering random trivia and watching NCIS is your life now.