One Year Later, Did Nintendo (And Friends) Keep Their E3 2018 Promises?

In June 2018, the Nintendo Switch was a few months past a debut year that featured the standout games The Legend of Zelda: Breath of the Wild and Super Mario Odyssey. What would Nintendo reveal at E3 2018 that could possibly rival their 2017 output? And could they deliver?

One Year Later, Did Sony (And Friends) Keep Their E3 2018 Promises?

On the evening of June 11, 2018, at LA Center Studios, PlayStation’s head of worldwide studios Shawn Layden welcomed everyone to a tent where Sony was about to host an unusual E3 showcase.

One Year Later, Did Microsoft (And Friends) Keep Their E3 2018 Promises?

E3 2019 is just around the corner, and it’s going to look very different this year without PlayStation. Before we look to the future and are blinded by the razzle-dazzle of trailers and announcements at this year’s event, we need to address what happened in 2018. As we ask every year: Did the three big console makers and their development partners deliver on their promises made at last year’s E3? Let’s find out. First up is Microsoft.

Five months after the release of Assassin’s Creed Odyssey, a legendary sword first teased during an E3 demo is now finally in the game.

Fallout 76's Multiplayer: The Promise Vs. The Reality

In the week since Fallout 76's release, it since has become one of 2018’s more divisive games. Its Metacritic page is a horrorshow; its official forum and subreddits are battlegrounds between those who have found something to love in the buggy online survival game and those who think Bethesda has taken the series off a cliff.

E3, a show in which the future of gaming pretends to be in the present, is in the past. Those demos that may or may not represent the final quality of the games they preview? All locked up. The previews and round-ups by writers who hit reasonable deadlines? Published.

And then there's me, straggling along. I did see some games. I'd like to tell you about them, OK?

The Makers Of Dying Light Are Trying Something Very New For The Sequel: Politics

Dying Light 2 takes parkour zombie slaying to a new city, and there's a reason for that. Where the first game, released in 2015, was about dealing with a viral outbreak in real time, the second will deal with the aftermath years later.

As with most games shown at E3 a couple of weeks ago, it's too soon to say if Concrete Genie will be what its demo hints that it can be. But it's clear that it will be an easy game to root for.

Mutant Year Zero: Road to Eden is pretty long name for a game with a straightforward pitch: What if XCOM but with animorphs?

While it's based off of a pen and paper role-playing game popular in Sweden during the '80s, developer The Bearded Ladies have made it their own by injecting the inspiration's DNA into a turn-based tactical game. After close to an hour with Mutant Year Zero, I came away excited to play more, and not just because one of the characters I got to control was a duck in a top hat sporting a crossbow.

All The Games Jason Played At E3

I'm back from E3, and I've brought a truckload of video game impressions with me. You can hear them all on this week's Kotaku Splitscreen, or read some of them right here.

My Most Embarrassing E3 Encounter With A Gaming Celebrity

I would like to tell you about a mortifying encounter I recently had with a very well-known figure in video games. It's a better story if you don't know who it is until the end.

Sometimes you go into a game demo, and it's just absolutely not what you were expecting.

This was the first E3 I've attended IRL, and I spent most of it interviewing producers of games like Splatoon 2, Jump Force and SoulCalibur 6.

Between learning tidbits about whether Splatoon 2's squid kids eat squid and why SoulCalibur 6's women still look like pin-ups, I managed to play a few upcoming games that I'm really, really excited about.

Serious Sam 4 Is Aiming For 100,000 Enemies On Screen At Once But It's Not There Yet

The developers at Croteam, the studio that makes the Serious Sam games, are looking to do the unthinkable with the fourth numbered instalment in the series: render 100,000 enemies on screen at the same time. Watching a hands-off demo of the game behind closed doors at E3, I was excited to see that feat in action, and for a second it looked like I might.

While the titular Sam was driving around in a combine harvester, Gnaars and Kamikazes began flooding over a hill in the distance. First it was just a few dozen, but moments later it had become a horde too numerous to count. Then the screen faded to black. 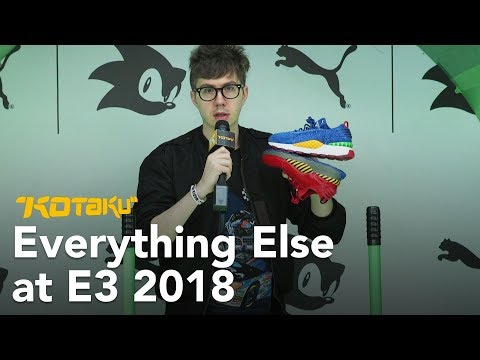 For those of us who didn't get a chance to visit Los Angeles for this year's Electronic 3 Two-Zero-One-Eight, Tim and our wonderful video team on the US West Coast have been hard at work providing us with an inside look.

Ghost Of Tsushima's Director On The Risks Of Making Something New

In an room in need of air conditioning in the Los Angeles Convention Center last week, game developer Nate Fox held out his left hand palm down, paused, and then slapped the top of it with his right. "Do you know - *slap* - that?" he asked.

I managed to survive E3 2018, my first one in fact, and I can even remember most of the games I saw and played. There's too many to name them all, but below are the most notable ones I got a chance to check out. I've written about some of them already on Kotaku, but there is also a handful of others I haven't yet had the chance to talk about.

Splatoon 2's face is all inky rainbows and cutesy cephalopods. It would be an adorable, idyllic wonderland, if not for the fact that controlling all of those snuggable urchins are real-life humans, who are often bad.

At an E3 where Nintendo and its partners largely played it safe with big Smash Bros. and Pokémon sequels, the company tucked a clever new Switch development in a trailer for a new Mario Party. Blink and you'd miss it: the sight of two Nintendo Switch screens connected into one oddly-shaped game board.

So, E3's done and dusted for another year. What'd you think?