Tokyo ESP is the story of a teenage girl with the power to phase through solid objects and a teenage boy with the power to teleport who decide to become superheroes. So while I wouldn't have been surprised by an X-Men cameo, I certainly didn't expect the Ghostbusters to show up — especially as villains!

In all fairness, these characters are never actually referred to as "Ghostbusters" nor are their individual names ever used in the episode. However, it's more than a little obvious who they are supposed to be. 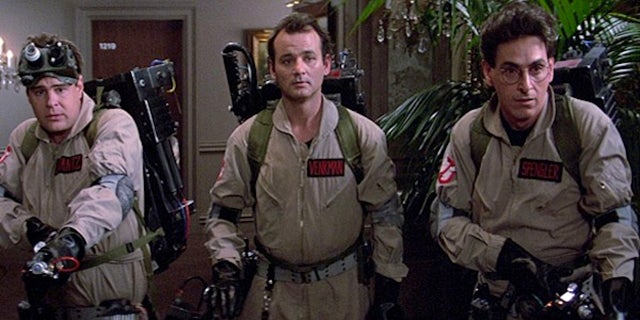 A bit of backstory: In the world of Tokyo ESP, people gain their superpowers from flying glowing fish — after said fish swim through their bodies. Pursuing these fish is often a flying penguin.

Oddly enough, it isn't the superpower-granting fish the Ghostbusters are after, but rather the flying penguin. Why? Is it related to some ancient demigod threatening Tokyo? An unstoppable army of samurai ghosts? Naw, they just want to get rich by selling a flying penguin.

Unfortunately for them, the penguin has a friend: a teenage girl who has been sort of keeping him as a pet.

Of course, the Ghostbusters aren't going to let something like a girl flying away on a penguin stop them from their goal. They have come prepared.

Wow. Anime Bill Murray just caught a hundred-plus pounds of falling girl like it was nothing. The man's clearly been working out.

Now here's their big mistake. Instead of leaving the girl on the side of the road, the Ghostbuster trio (as Winston must have clearly seen this penguin-catching fiasco coming and wanted no part of it) decide to kidnap the girl along with the penguin.

And while it is well established the Ghostbusters have seen some pretty crazy stuff in their lives, I doubt they ever expected to be assaulted by a penguin-wielding Japanese school girl.

Luckily for said school girl, it is at this moment that the anime's heroes arrive — though I am not sure how much help phasing into a wildly swerving car is going to be.

Huh. So remember how I said she had the "phasing" superpower? Maybe we should add probability control and/or invulnerability to her skill set because she is completely unharmed from this extreme crash.

Oh... So now we use the teleporter to get away from the wreak instead of, oh, I don't know, extracting the kidnapped girl from the moving vehicle before the violent, possibly fatal car crash?

Oops. Getting the girls out of the car seems to have unbalanced it — leaving it to topple down on the innocent bystanders below!

Luckily, the teleporter is on the scene to drop himself, the van, and the Ghostbusters out into the ocean. ...And while we see him get rescued by the phasing girl, no one seems to rescue the Ghostbusters. Thus, I must reluctantly conclude that the trio, trapped in the sinking car, met their grizzly end at the bottom of Tokyo bay. Not at all how I expected them to go.

Well, at least the world still has hope when it comes to supernatural threats.

Tokyo ESP is currently airing on Tokyo MX in Japan. It can be viewed for free with English subtitles on Funimation.