11 Of The Best Sci-Fi Robots Ever

The thing that makes art great — whether film, books, or TV shows — is that it aims to teach us about ourselves and the human condition. But sometimes in order to do that, you need a teacher who is completely inhuman. That’s where robots come in.

Robots have origins rooted in ancient mythology and have often been used as a foil to illustrate humanity’s vices or shortcomings. And sometimes they exist only to crack jokes about their shiny metal arse.

To celebrate The Terminator’s 30th birthday last week, I posed the question “What is the best robot ever?” There are literally hundreds of great answers to that question, but this list compiles the top 11 answers that kept recurring in the comments and on social media. This list captures the heroic, the deadly, the comedic, and the philosophical qualities that make robots so easy to admire.

Running away with the most votes, Futurama‘s Bender was by far the most-loved robot of all. Bender made his first appearance in Space Pilot 3000 as a foul-mouthed, beer-guzzling automaton who always wanted to “kill all humans,” you know, whenever he eventually got around to it. He was a perfect counter to the show’s more mild-mannered Philip J. Fry and easily had the best one-liners of any character in the show’s seven-season run. 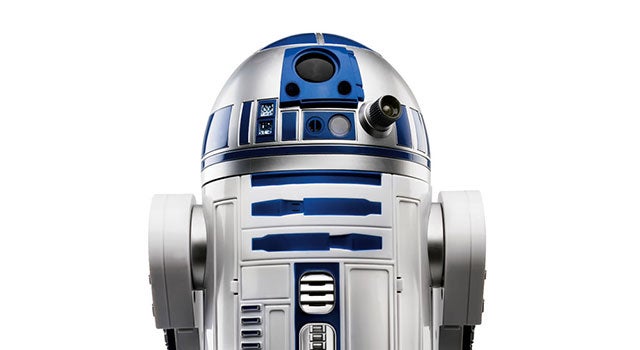 The REAL hero of the Star Wars saga. Let’s face it, without R2-D2, the Empire would a) have been formed much sooner, and b) never ended. R2-D2’s in every movie, and in every movie he does something heroic, without which the “heroes” would be squashed.

Let’s be sure to give much love to R2’s gold-plated partner in crime, C-3P0. He may be a mechanical buzzkill, but that’s kind of why we love him in the first place.

Being the prompt for the original question, it’s no surprise that the Terminator still holds a near and dear place in our hearts. Surprisingly enough, Summer Glau’s portray of Cameron in Terminator: The Sarah Connor Chronicles also received an equal amount of love. Along with the T-1000 and the T-X, Schwarzenegger and Glau make up one happy genocidal robot family. 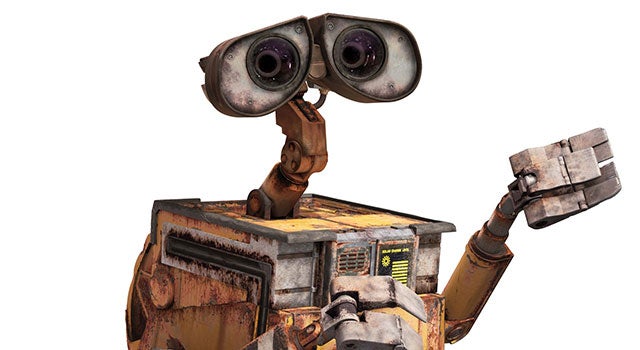 In the running for “Cutest Robot Ever Created” award, Wall-E was the perfect embodiment of the little robot that could. Wrapped around a kid-friendly Pixar film, Wall-E teaches us a lot about our wasteful nature, or dangerously sedentary lifestyles, and the horrors of rampant consumerism. But Wall-E was also a robot that evolved beyond his primary function of endless cleaning and learned to strive to be something better, making him more human than the cartoonishly fat homo sapiens aimlessly flying around in space. 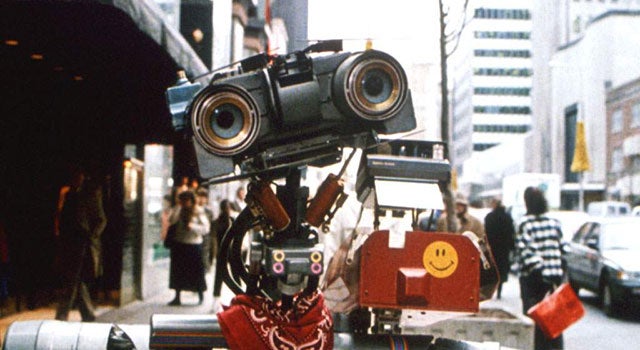 Of course, it would be weird to include Wall-E on a list of greats and not include the robot that inspired his creation. With a much more abrupt character change (caused by a lightning bolt), a military machine moves beyond its killing characteristics and becomes the robot best friend we all wanted growing up. 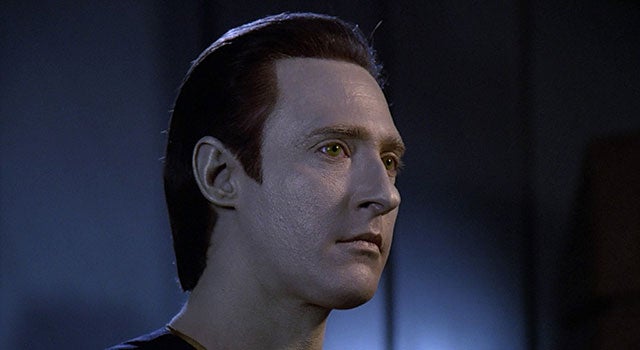 No robot in television history taught us more about being human than Star Trek: The Next Generation‘s Data. He served as Lieutenant Commander aboard the Starship enterprise, and his character was meant to transform over the show’s seven seasons from a cold calculation machine to an empathetic humanoid. Data also challenged what it means to be a robot, and if robots of a certain complexity deserve basic human rights. All these philosophical questions are what made Data such a great addition to the Enterprise crew. 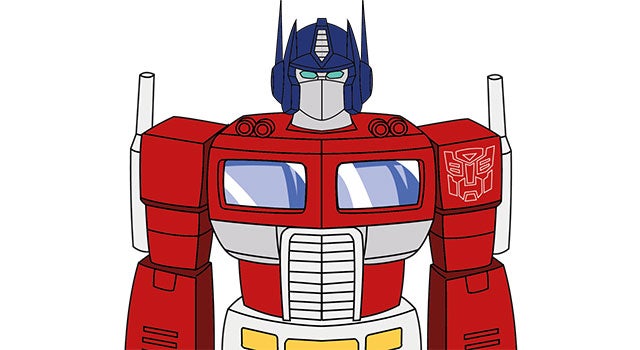 Even before Michael Bay got his explosion-obsessed fingerprints all over this beloved 80s cartoon franchise, Optimus Prime was a robot that just oozed coolness. He’s leader of the Autobots, transforms into a kickass 18-wheeler, and gets to say one of the most iconic cartoon catchphrases next to “I have the power!” and “D’oh.”

“Autobots, transform and roll out!” 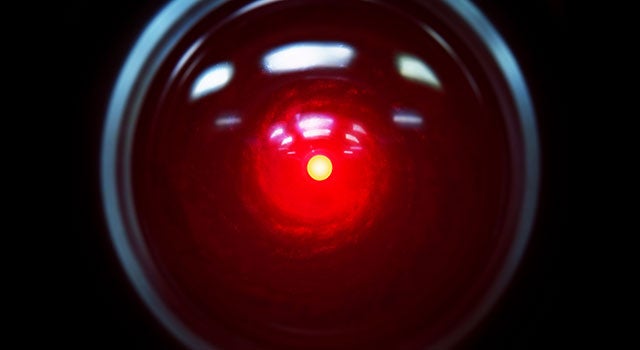 Ok, yes. HAL 9000 is technically artificial intelligence and not a robot, but readers were quick to mention that the Discovery One was basically HAL’s body, and the demented AI served as its brain. And you know what? I’ll allow it. HAL is basically the opposite of robot characters like Data, Johnny 5, and Wall-E. Where those robots strive to be human, HAL definitely doesn’t and is essentially the fictional AI “demon” that keeps Elon Musk up at night. If a robot statistically analyses that human error threatens an important mission to Jupiter, the next logical step would be to eliminate the threat. Multiply that to a global scale, and you suddenly have SkyNet. 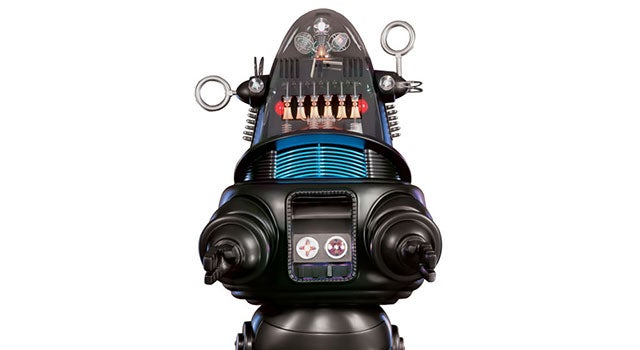 Robby the Robot, from Forbidden Planet. He could easily topple the house off its foundation, but he cooks and sews too. He once made gallons of bourbon for the ship’s cook: “I’ve been from here to there in this galaxy, and I want you to know you’re the most understanding soul I ever met up with.”

“I didn’t ask to be made: no one consulted me or considered my feelings in the matter. I don’t think it even occurred to them that I might have feelings. After I was made, I was left in a dark room for six months… and me with this terrible pain in all the diodes down my left side. My first and only true friend was a small rat. One day it crawled into a cavity in my right ankle and died. I have a horrible feeling it’s still there…” – Marvin 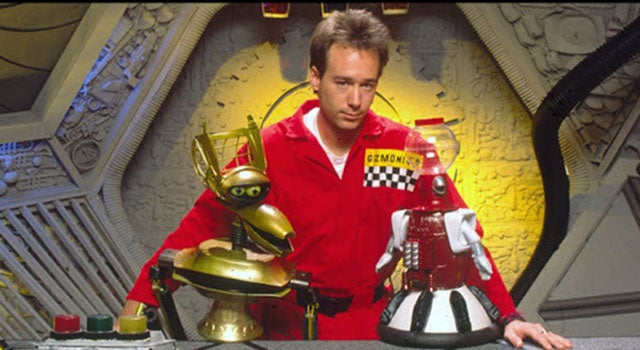 Creating comedy with lifeless automatons isn’t easy, but Mystery Science Theatre 3000 made it look like it was. Joel and Nelson joined by their robotic hecklers Tom Servo and Crow T. Robot offered up some of the best TV comedy at the expense of horrible, horrible, b-movie films. Their robotic riffing, powered in part by great vocal performances throughout the show’s 10 seasons, make Crow and Servo a robotic duo that rivals C-3po/R2-D2’s Laurel and Hardy routine.