As part of our recent shift in focus, I’ve been playing (and thus writing) about Civilization even more than usual. And for a while, it seemed every time I did, someone deep in the comments section would be whispering about another game I should try that, *gasp*, might be better than Civ. So I did. And whaddya know, in a lot of ways, they were right.


That game is Endless Legend.

It will never escape the comparisons. Endless Legend is, at the most basic level, a lot like Civilisation. You choose a faction, you advance your technology, you expand across the land, you build armies, you explore. There’s diplomacy, strategic resources, a fog of war and an endgame victory you can work towards.

But to say it’s a lot like Civilisation, looking only at those superficial similarities, is to do a disservice to the things about it that are so different. And wonderful. 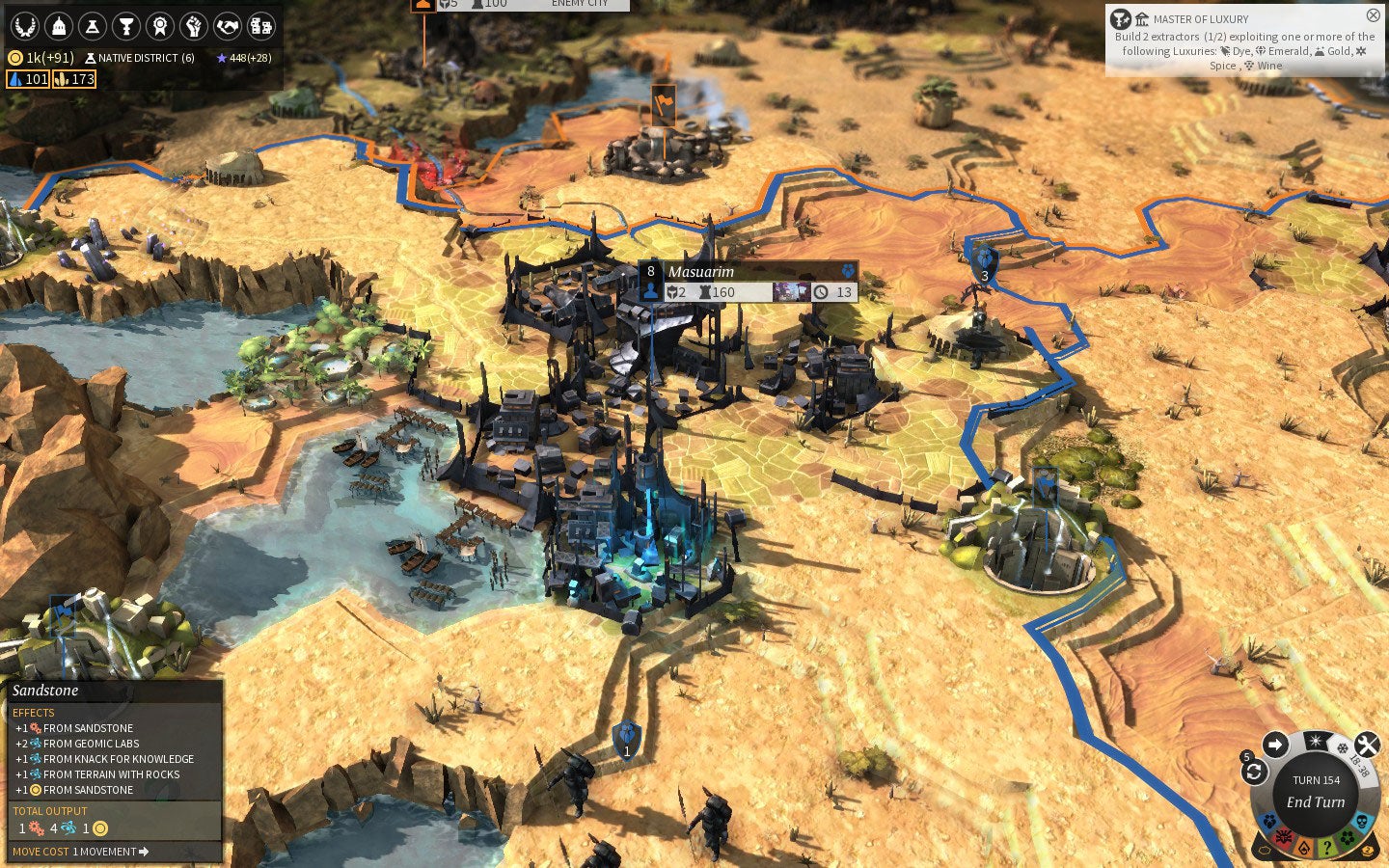 Endless Legend doesn’t take place on Earth. Instead, it takes place on the fictional planet Auriga, a place that at first glance is your typical fantasy fare, a land full of monsters and magic. So, Civilisation with monsters and magic. OK, that could be cool, if also a little generic (we’ve had plenty of 4x fantasy games before).

Only, Endless Legend messes with the fantasy setting to introduce some nice sci-fi touches. While some races are slight twists on things like elves, my favourite faction, the Vaulters, are actually descendants of the survivors of a starship crash thousands of years ago. Their tech reflects this; crossbows are made from the non-functioning husks of old space assault rifles, and busted, ancient tech is revered as some kind of magical relic. What’s more, this story plays a part in the Vaulter’s quest for victory (as does every race’s unique plot).

There are other interesting races, too, notable not just for their backstory, but how radically different each playthrough can be using their distinct strengths. The Roving Clans, a nomadic tribe, can move their cities across the map. The Broken Lords are the ghosts of fallen knights, trapped between life and death and forced to eat the game’s currency to survive instead of its food. The Cultists are basically robots who can only build one city but make it one hell of a city. 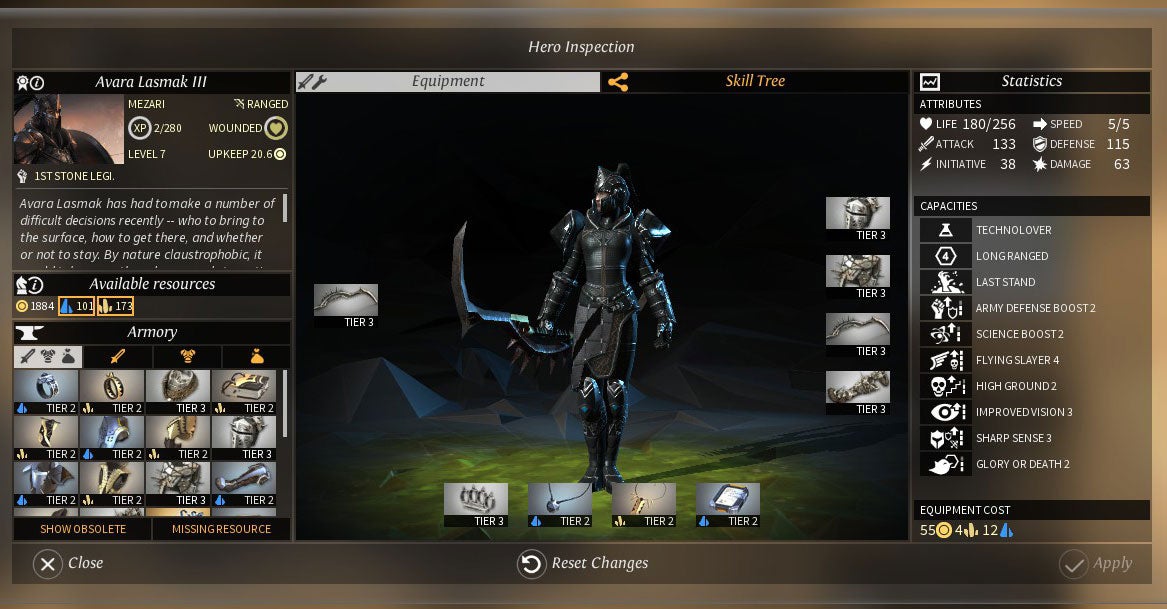 Endless Legend’s fantasy roots go deeper than just the story, though, as there’s a little RPG to the game as well. You’re able to make use of hero units, who can either govern cities or lead armies, and these units become the stars of the game. You can level them up through exploration and combat (assigning new skills and perks to them), as well as equip them with gear (which can itself be levelled up).

Your heroes aren’t just walking buffs, either, they’re necessary for the game’s quests, small challenges that pop up over the course of the game (or exploration), and which keep things interesting during quieter moments. These challenges normally involve travelling the map exploring ruins, fighting monsters and helping villages.

I’m shocked by how good this game looks. It’d be classy if it had come from a big studio like Firaxis or Creative Assembly; for its slick menus and gorgeous 2D art to have come from a small team working under the radar is a fantastic achievement. Maybe it’s just me, but one of the biggest problems I have playing indie strategy games is that, while the mechanics can often be sound, the experience is let down by clumsy menus and gross visuals.

But Endless Legend excels in both these areas. The UI is crisp attractive and clear, split into a handful of sections that cover pretty much everything you need regularly, and a notification system keeps you up to date with everything that’s popping up and needs attention. It’s smart, too, with lots of little flourishes that are welcome in a game you could be spending hours in; to exit a menu, for example, you don’t need to find the “X” button, you just need to right-click anywhere and you’ll be back at the world map.

And what a world map it is. Taking visual cues from the Game of Thrones intro, it divides its hexes into clear, almost cartoon-like terrain, and is a joy to look at. I also love the way it slowly changes as you zoom out, bleeding from the closer view (which gives you a look at the terrain and units) to a more strategic map outlining regions, resources, etc.

That map isn’t just strategic, though, it’s also tactical. Perhaps the area Endless Legend gets bravest – and most successfully breaks from the Civilisation template – is in combat. You can’t just build units and pump them out onto the map; every unit needs to be assigned to an army, and armies are capped, meaning you’ll have to pick and choose your battles.

Most of the time, you only see one unit on a tile on the map, and that will be the leader of that army. But when two armies meet, things change. A line is drawn around the opposing forces, and each individual unit that’s part of those armies marches out and occupies its own tile, right there on the same strategic map your cities and resources are on. From then on, you get to control the battle yourself, ala Final Fantasy Tactics or, more recently, The Banner Saga. The transition is seamless, and adds strategic depth you don’t normally see outside hardcore military sims, making battlefield selection is just as important as unit selection.

Winter is Coming – The game has seasons. Sort of. You spend most turns enjoying summer, where the sun is shining and your food is plentiful, but every once in a while winter kicks in (see below), and it’s brutal. Your food production drops, and your units can barely move across the map. It’s a really well-timed mechanic, as it happens enough to make it strategically useful during wars, but not often enough to become a drag. 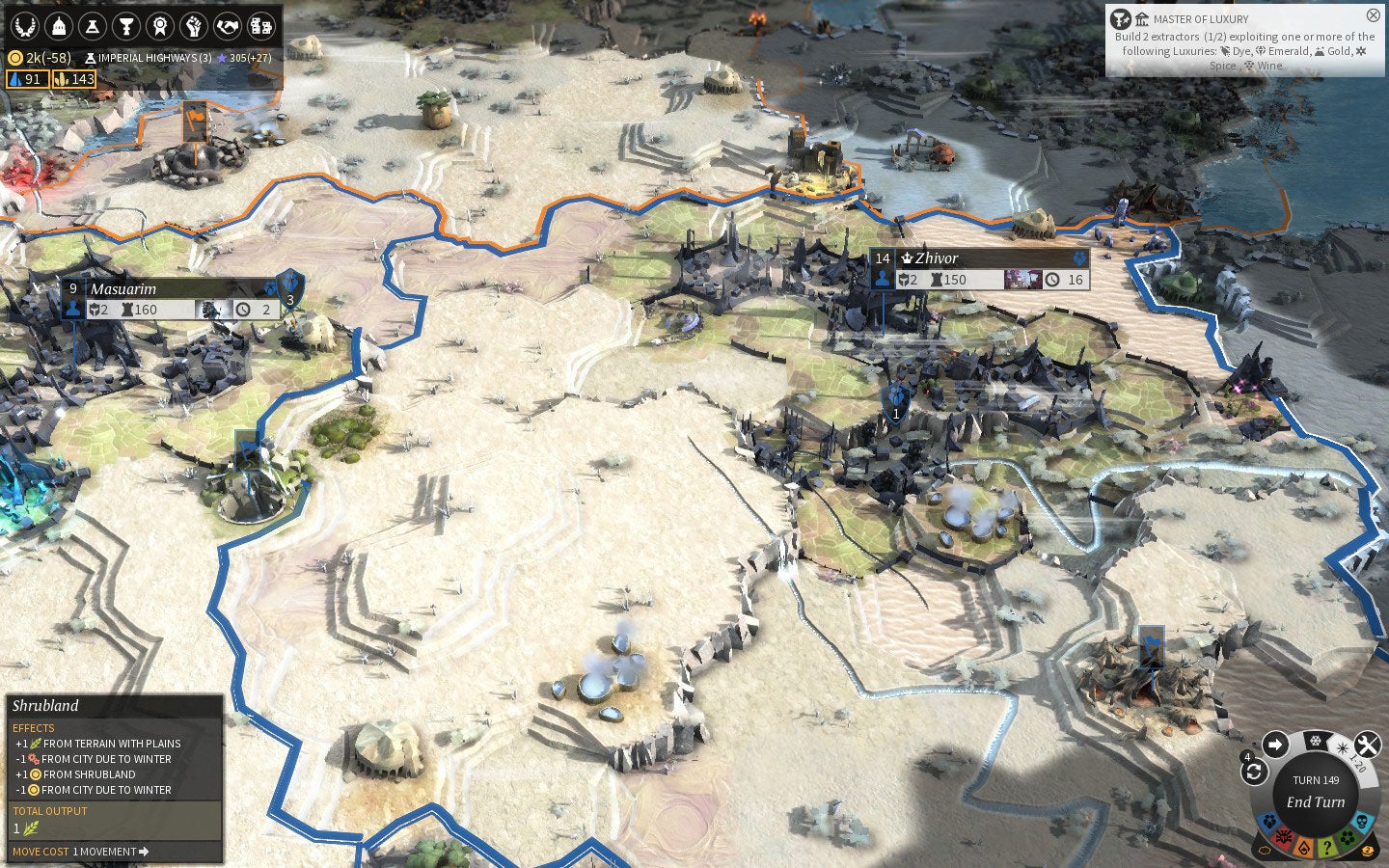 Border Control – Rather than copy Civilisation’s organic border system (or indeed foresake one altogether), Endless Legend takes the view that the land here is already being lived on and already has names and a history. So the map is divided into regions, each of which is populated by small villages. Each region can only support a single city, so whoever first builds a settlement in a region automatically gets control of the whole thing. Making this more dangerous than it sounds are the fact those villages are generally hostile, and while they can be subdued peacefully, the monsters they produce roam the map and will attack your units. I liked the idea of locking the map into these pre-determined sections, as it made managing my expansion (and that of my opponents) and dealing with wars a little easier.

Science for the Lazy – Endless Legend doesn’t just let you endlessly queue up your production, it lets you line up your science as well. Provided you know what you’re doing and which order you want to research stuff, you can spend a few minutes clicking at the start of the game then not have to worry about science again for hours. 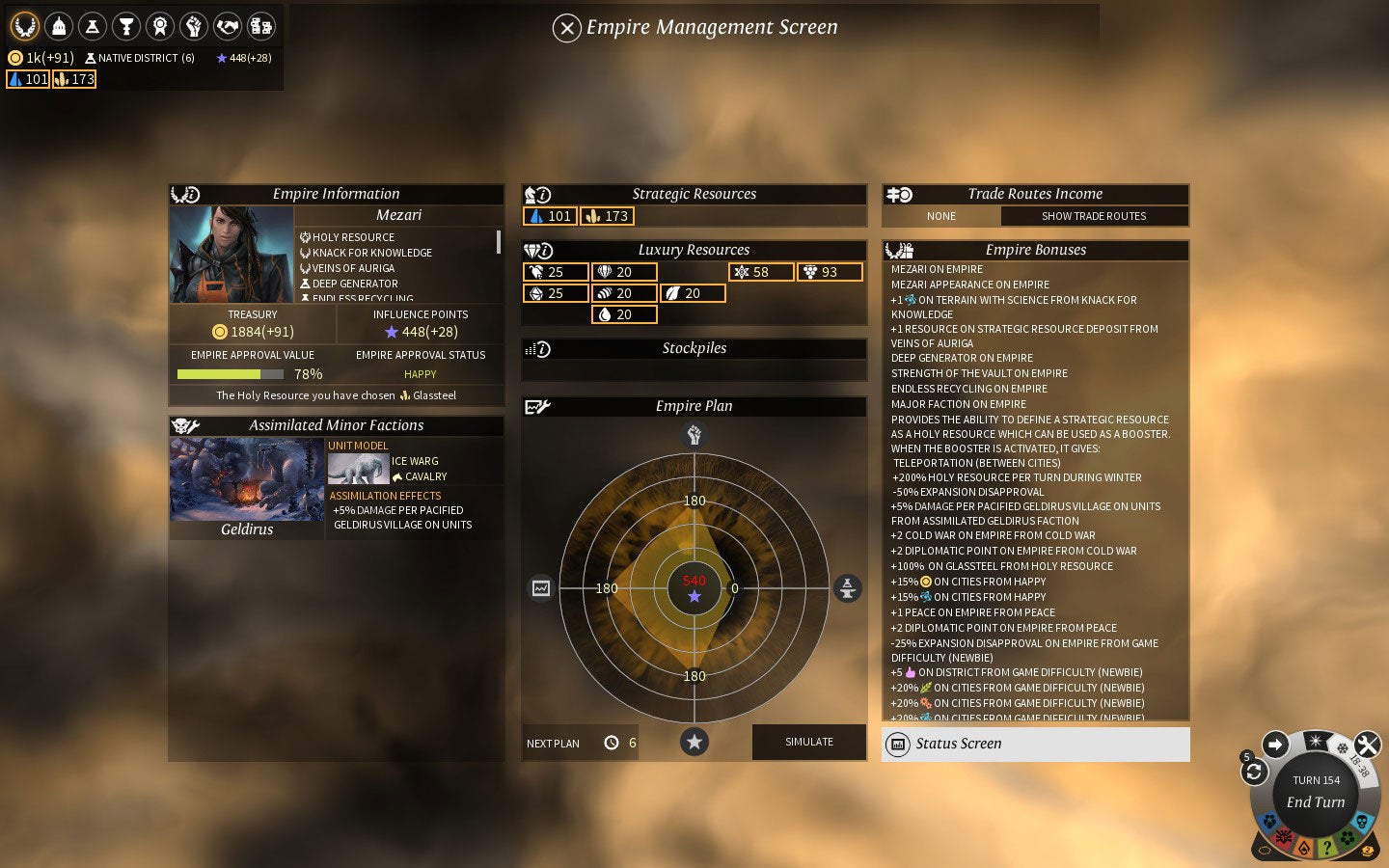 If I sound excited about this game, that’s because it’s an exciting game to talk about if you’re into stuff like this. It’s such a breath of fresh air, the perfect example of a game taking Civilisation as its base but then shooting off on its own to add (or invent) aspects that compliment those foundations so well.

I mean, it’s far from perfect. The AI seems overly-timid, which is fine for much of the game while you’re exploring ruins and subduing villages, but once things settle down it can make things a little boring (though of course this is less of a problem in multiplayer). There are also just a few annoying little oversights around the edges of the game’s design. If you accidentally commit to battle there’s no option to withdraw, for example, and a few necessary systems are hidden in weird places in the menu or take too many clicks to get to.

But right now, in a world where the actual studio responsible for Civilisation put out such a timid spin on the series’ formula, to play something that’s so brave in its intent to spice it up, and which pulls so much of it off with such style, has me not caring about those few rough edges. Endless Legend is a strategy game that you may never have even heard of, let alone played, but if you’re into Civilisation I can’t recommend it highly enough.